The Allure of Alleys

Last August: I'm sitting out back, in my newly created little patio/gazebo/folly (haven't landed on the right name for it yet), with a mug of tea steeped from a bright blue package brought back from a plantation in the Azores by friends (already you can see how lovely this is), rustling open the first page of a book called Witches on the Road Tonight by Sherri Holman. Life is scrumptious.


A sudden scritching noise distracts me; two squirrels are chasing each other up and around the neighbour's big linden tree overhanging the alley. Are they playing? Is one chasing the other with intent to hurt? (hope not) Is this squirrel foreplay? They're in another world from where I sit - between us are my back gate, the alley, and the neighbour's back gate.


Alleys. Laneways of mystery. Seducers of the imagination. Pathways for peeking into hidden things. A bit scary. Always interesting.

There was an alley behind our house where I grew up. The garbage truck came through back there. But so did the scary people.
The man who rumbled by in a creaky horse-drawn wagon, blowing his screechy horn to announce his arrival, trading used goods with the housewives in the neighbourhood. (He was called the "sheeny man", or at least that's what it sounded like to my kid ears. I have a feeling that it might've been a derogatory title. My apologies to him and others of his profession if it was.
The hidden men who thrummed slowly by in their cars, pausing at backyards of interest. Would they come back at night to break into our houses and get us?
The rough kids who yelled and crashed their way through, one particularly vivid time swinging a defenceless little garter snake by the tail and bashing its head on the ground. I still shudder picturing that.

The Seven Dials, that slimy seamy stinking cesspool of Victorian crime and crowded humanity. Lots of lightless and choking-yellow-fogged alleys there (according to Dickens and later, Conan Doyle and Agatha Christie), harbouring cutpurses and cutthroats.
(To be clear, the Seven Dials didn't start out bad; it just sort of slid down that way. It was intended to be a great neighbourhood with a centre core of sundials from which seven streets led. And today, it's trendy and cool.)

So, OK, I've mentioned that alleys breed mystery. How to get from there to tarot? I don't know yet. I suppose, for the uninitiated, tarot is mysterious. And sometimes scary. Like alleys.
And there's the flip side - the idea of tarot revealing mystery rather than breeding it.


I'm going off to have a think and a browse through the shelves. See what jumps out at me. 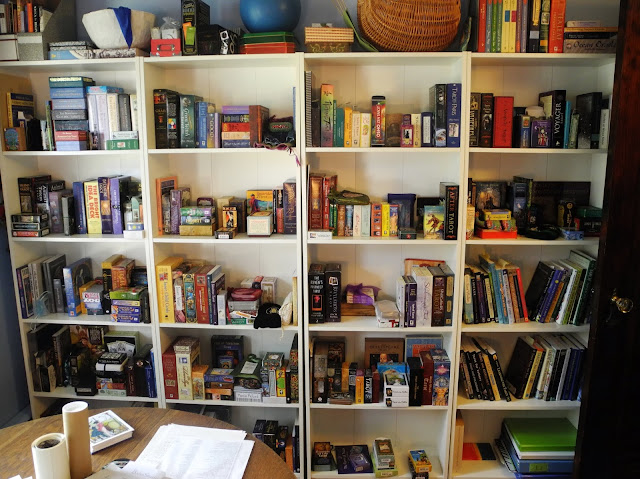 I'm back, with four decks that seem likely to have alleys in them, or people that look like they might inhabit the alleys of my childhood.

First, we have the "types" which, rightly or wrongly, my sheltered kid-self believed might hang out in alleys.

Next we have the people who end up walking in the alleys, perhaps ill-advisedly. It's interesting that the only one prepared for a possible alley encounter is also the only one walking there in daylight.
Most prudent of her.


And last, the stuff of nightmares. The ones we fear we might find there.

Lest the alleys of the world feel that I'm giving them a bum rap, here's London's Seven Dials as it is now! 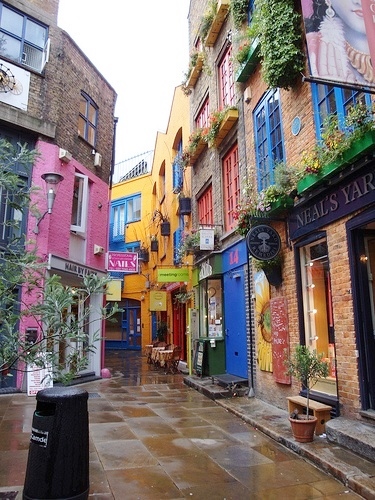 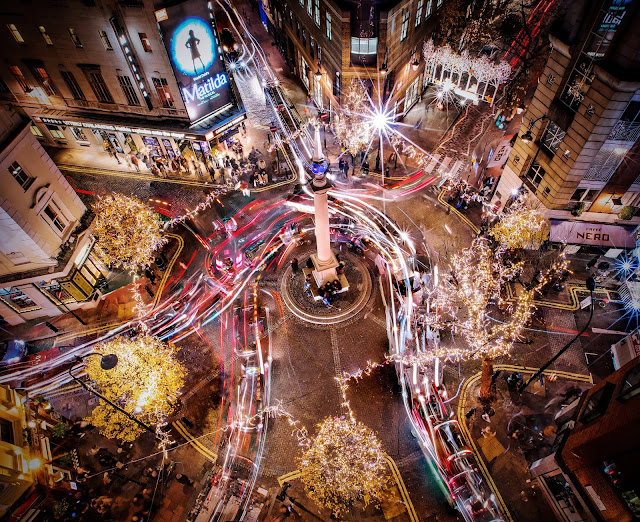 Tarot, Tea, and Friends around the Fireplace (featuring the John Bauer Tarot)

For several years now, right after Christmas, a few friends have gathered for some communal readings.
We sit by the fireplace, sip from Eileen's collection of ornate teacups, nibble homemade goodies, and all contribute our thoughts and ideas toward each person's question, one at a time.
Sound warm and wonderful? It is! And one of the dearest days of my holidays.

This year's decks were the Everyday Witch, the Victorian Romantic (2018 edition with metallic overlays), the John Bauer Tarot, and as always, the AnnaK and the Gaian. (pretty sure I've forgotten one...)

As you'll soon see, the John Bauer is the most mysterious of all, and least like the RWS. Truth be told, some of its cards are a bit huh? But they're all gorgeous. A tiny art gallery in a box.

So let's give it some generic set positions, and see what it says.

Hello, John Bauer Tarot. Welcome to my blog, and happy 2019!
What have you to say about the following for this early quarter of the year?
1. Do less of...3 of Wands 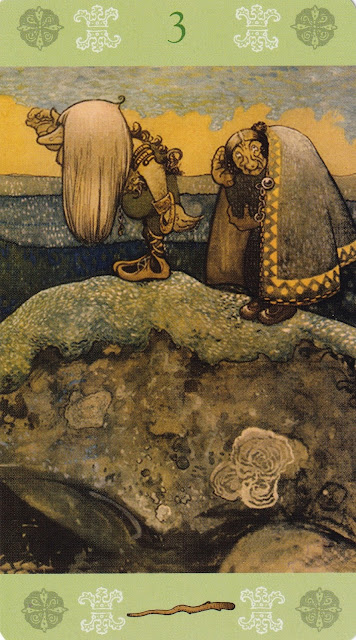 Creature #1: I can't see a dang thing through this fog.
Creature #2: That's not fog, Marvin, it's your hair. OK, you've dragged me all the way up here - now what?
Do less stumbling around without knowing where you're going and what you're doing. 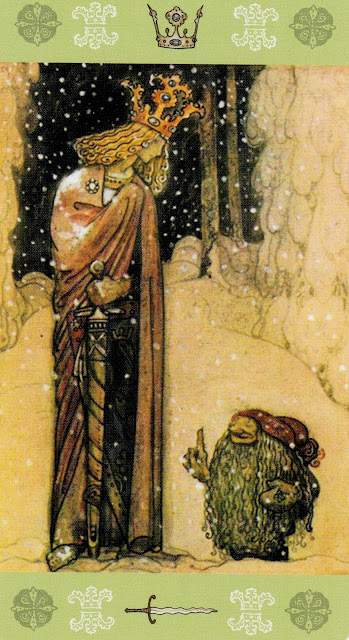 The King: Well, hello, little lady. Aren't you a bit old to be out wandering alone in all this snow?
Little Lady: Listen here, big fella, just because you're taller than I am doesn't mean you're the boss of me.
Do more respecting of others. 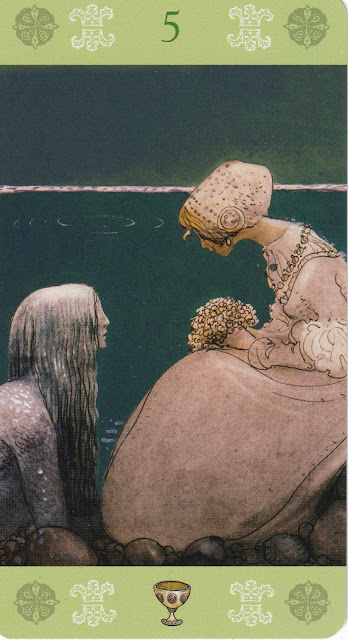 Kneeling girl: I'm so sorry, Miss. I meant to have your lace collar ready for today, but we ran out of tallow for our lamp and I couldn't see to finish it.
Sitting girl (sobbing): And I so wanted to look my best for today.
Do this right now: Get your priorities straight.

4. Start thinking about this...Page of Pentacles 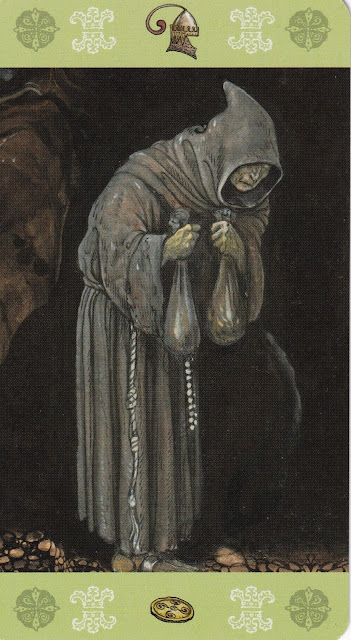 It's no use trying to carry so much gold that you lose your balance and trip on your belt.

5. A Major thought for you...XV The Devil 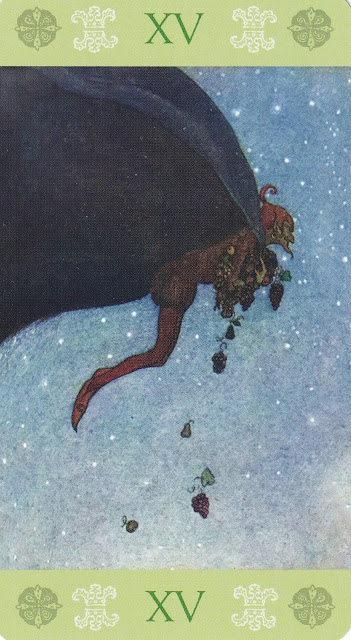 Hey! You could hurt someone like that!
You know that old saying, "Don't run with scissors"? Well, this is almost the same thing.
Don't drop grapes from a great height; you never know who's down there. 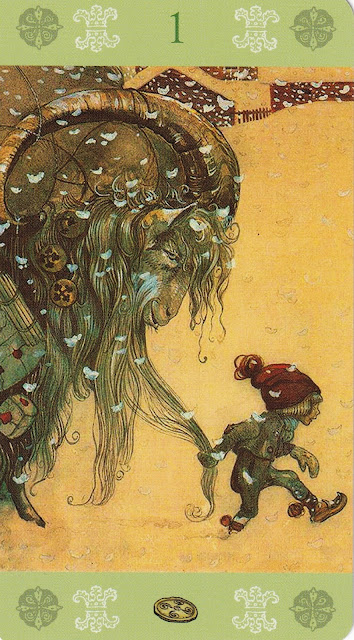 Look, Mummy! He followed me home! Can I keep him?

With apologies to the beautiful John Bauer Tarot for making light of its amazing images. I couldn't bend my mind to seriousness today. 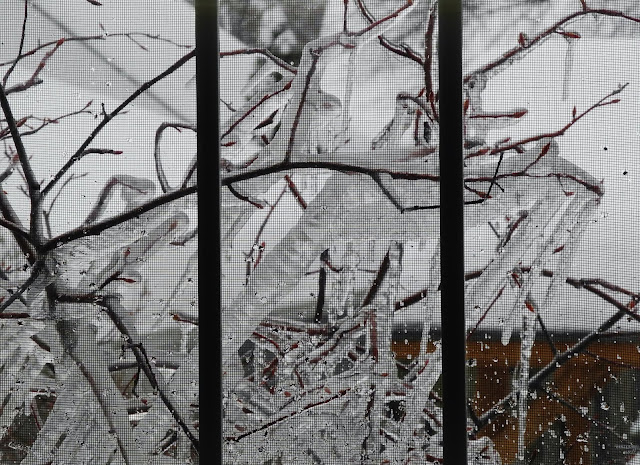 Frigid temps, ice and snow, record-breaking lows this past week.
As a result, one dance class, two choir practices, and one concert - all cancelled.
Hurray for permission to stay home and have guilt-free cozy time!