What a brilliant idea, I thought. A nine-patch grid using the friendly little Halloween Tarot.

Well, it turns out that...I had exactly the same brilliant idea three years ago!
Perhaps this is the start of a triennial forgetfulness tradition?

Anyway, original or not, here's some fun with the Halloween Tarot...
(Don't ask me what happened to the Six of Imps. Some techie glitch. Or Imps at work?) 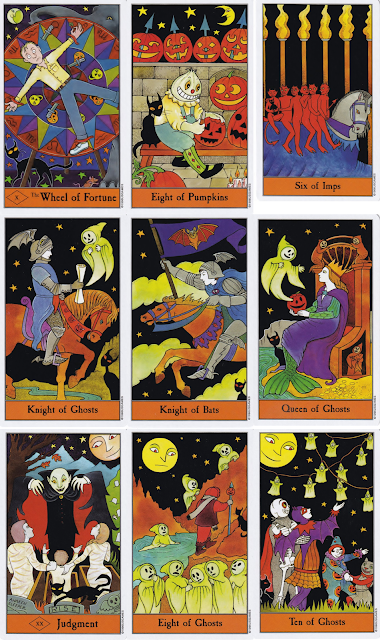 First row
You know that feeling you have when - even though you're working steadily on a project -
the chance of success feels like a stab in the dark, or tossing some dice, or the roll of a roulette wheel?
Well, take hope! Triumph is just around the corner! A party of naked Imps is on the way! 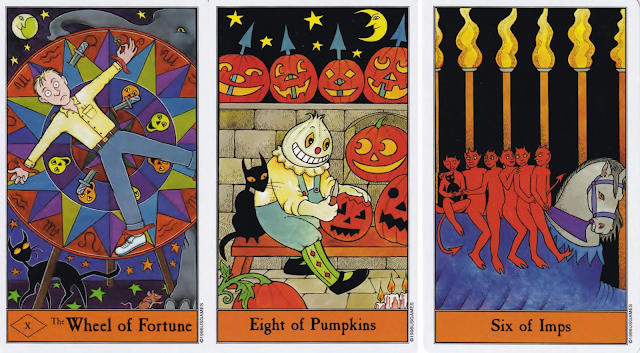 Middle row
You're running around like your head's screwed on backwards;
meanwhile the prissy-pants Knight of Ghosts is mincing his smarmy way to the Queen,
who receives the message, thanks him warmly, and sends him home with pumpkin pie.
(I hate it when that happens.) 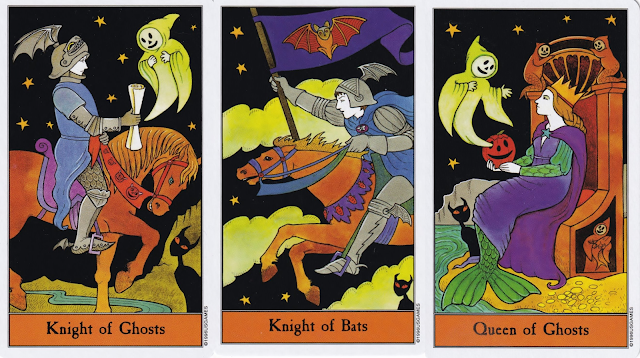 Bottom row
You've decided to leave the group because...
people are being too damn judgemental.
But they all beg you to stay, declare that they love you just as you are, and throw a party in your honour.
(Don't you love happy endings?) 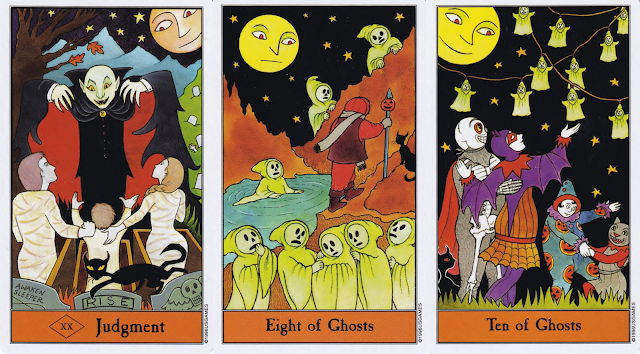 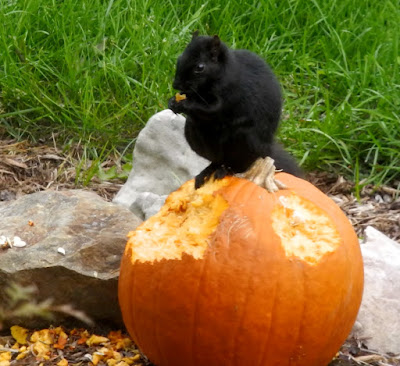 Knights running off in the wrong direction

Several years ago Caitlyn Matthews spoke at the Readers Studio in New York. She got our attention by singing into the microphone 🎵 which shut up our babbling in a hurry.
Part of her presentation was about reading directionally - the way people are facing in the images as they are laid out side by side for a reading.

Of course there was much more to it than that, but it's enough for this post.

Last week these nine cards from the Everyday Witch Tarot were on my table. I was playing around with making a 9-patch pattern (3x3). As I was here a few years ago. And most everyone was heading to the right or standing still, except for the... 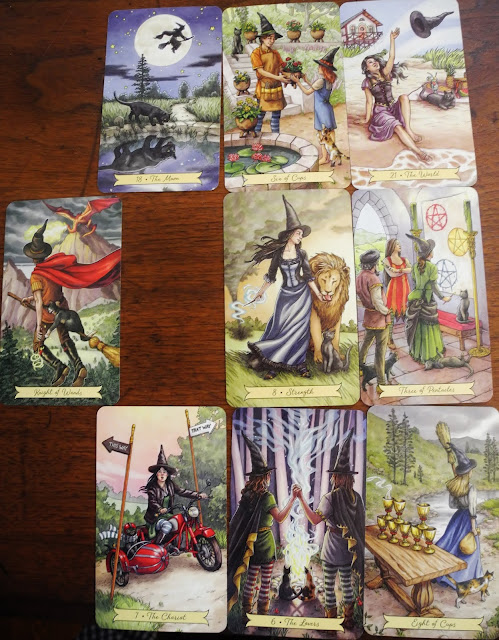 ...Knight of Wands. Where on earth is he going?
What kind of impetuous sprint is this? What's caught his attention, or distracted him?
(Admittedly a dragon is a pretty big distraction...)
Will he lose sight of his primary objective and/or be rewarded by a serendipitous finding? 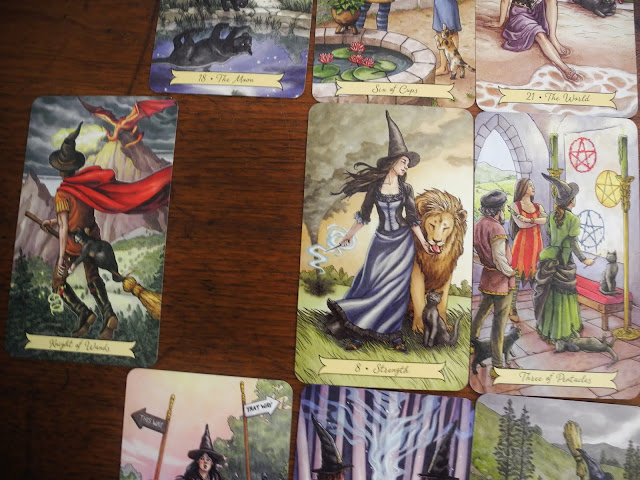 Knights aren't like Queens and Kings. The Knights' grasp of their suits is not yet fully formed and developed. They haven't always figured out how to wield their element calmly and rationally. But they have a lot of energy and enthusiasm for their quests! Especially the Knights of Wands. All that fiery get-up-and-go.

I decided to investigate more Wands Knights. Are they all off on a potential wild goose chase?
The answer is...a whole lot of them are!

Going through my shelves alphabetically there were 16 backwards-going or thinking-about-it Knights just in the first 5 letters A-E! Imagine how many hundreds more are out there, racing off to the ⟽ ⟽ ⟽

Here they are, in alphabetical order. First - those who are already on the move, riding to the left. 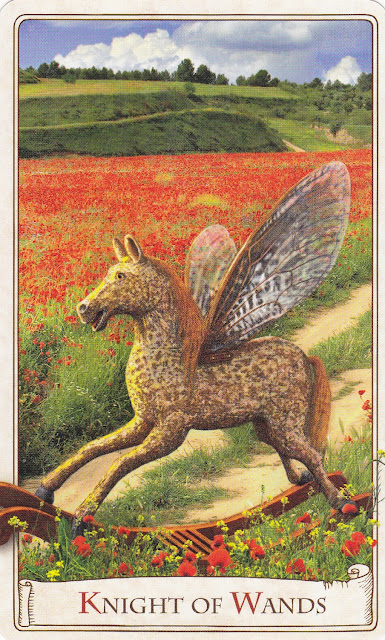 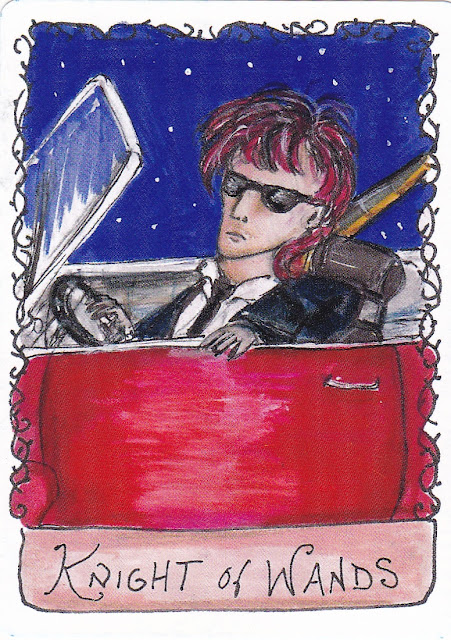 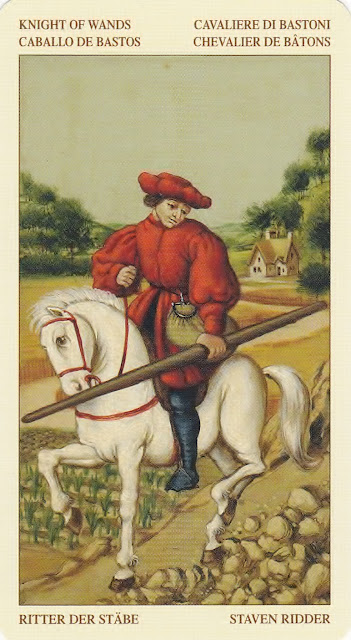 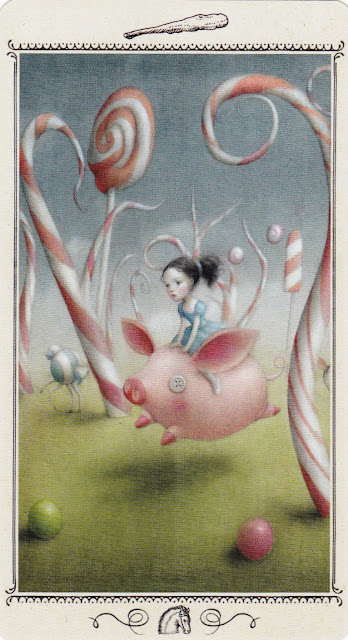 Circle of Life Tarot
This one is debatable, because of the direction her unicorn is facing;
but look which way her hair is blowing. 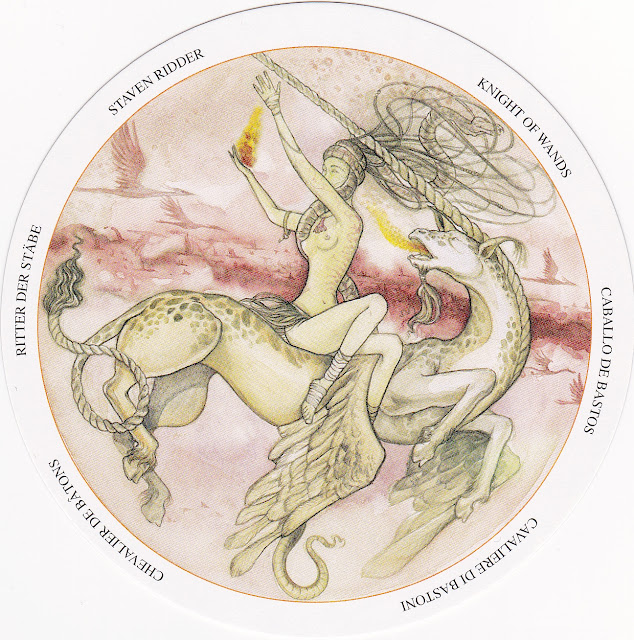 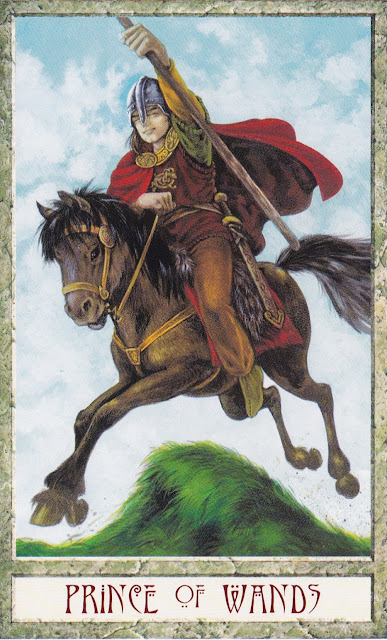 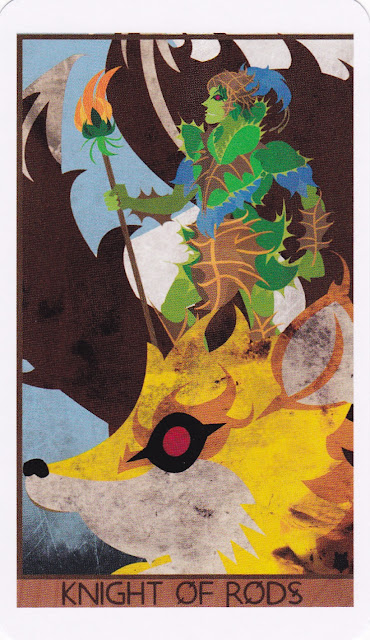 and the Knight who started this whole post...from the Everyday Witch Tarot 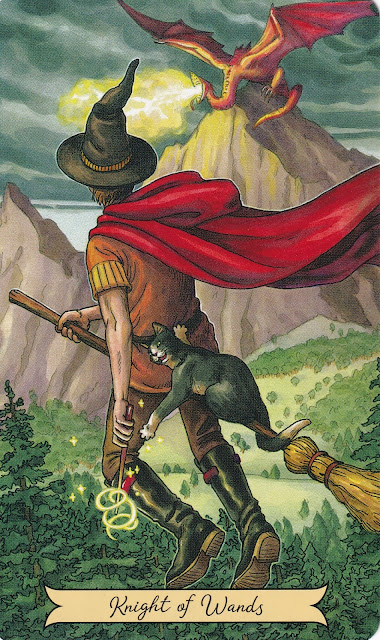 And now - those who've not yet decided but are seriously thinking about heading back. 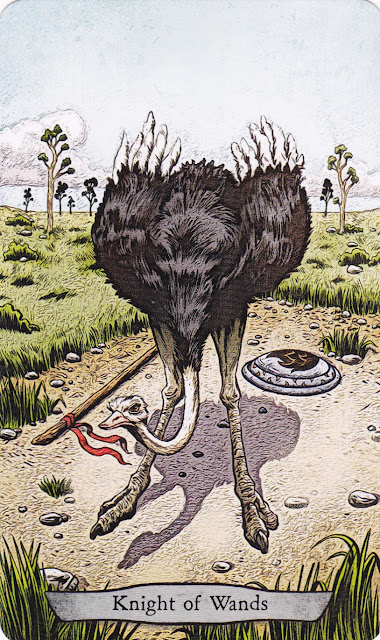 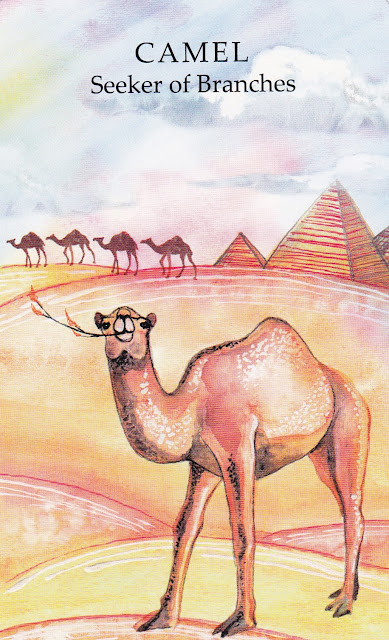 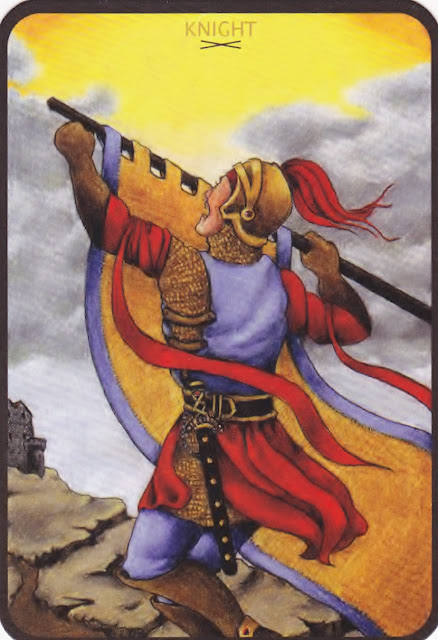 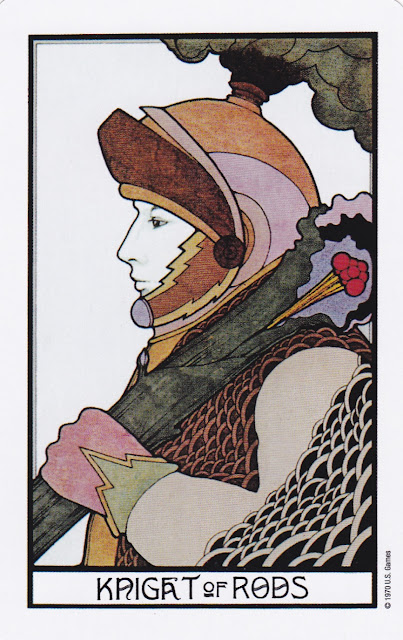 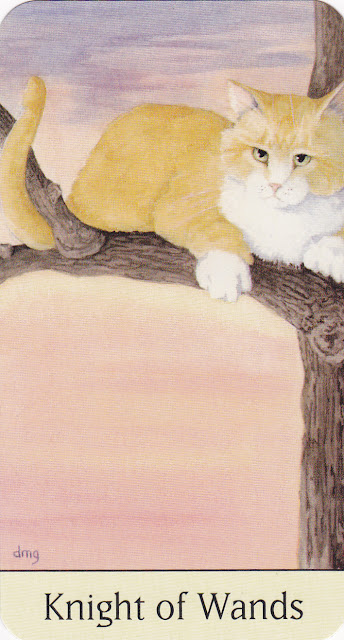 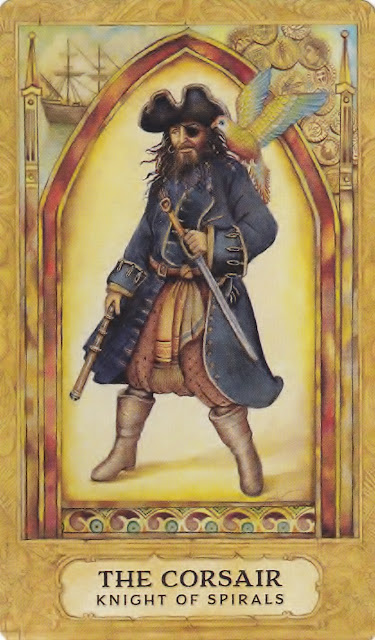 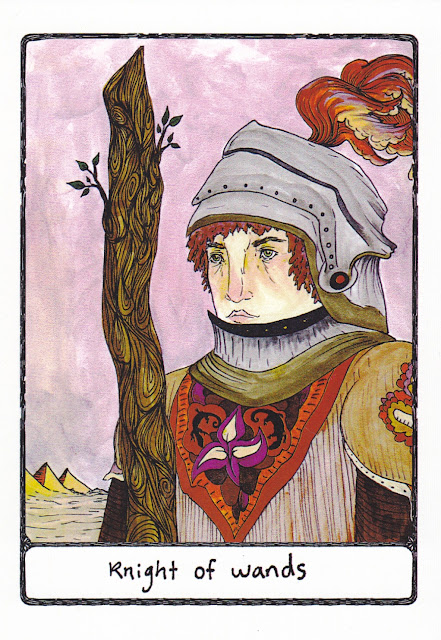 There you have it! Sixteen Knights-Possibly-Errant.

Stratford, ON, where Shakespeare and other playwrights reign supreme for 6 months each year, swans glide by on the Avon River (along with the ever-present Canada geese), and trumpet fanfares announce the imminent start of each production not once, but four times. A very Knight-ly start to the proceedings.

This year's theme is The Will To Be Free.

I saw three plays this year and loved them all for different reasons.

The Tempest, written about 1610-11, when Knights were still in service to the Monarchs.
The Music Man, set in 1912. No Knights, but certainly trumpets and uniforms galore. And a horse.
To Kill a Mockingbird from 1960, set in Alabama in 1936. Atticus Finch is the Knight in Shining Armour.