Mismatch: Me and the Majors

Forgive the bad grammar. I needed all those MMMs.


I'm not a fan of the Major Arcana, and find Majors-only decks disappointing. The flaw is mine: I'm uncomfortable navigating in that glittering gallery of archetypes. Give me the everyday down-to-earth homey Minors any day.


People go about arranging the Majors in a variety of patterns. The most common way of sorting them, at least that I've read about, seems to be in 3 rows of 7, leaving aside the Fool. Writers make cases for what each row represents in the Fool's life journey, and also sometimes the links between cards vertically above and below each other in the layout. For instance 3 Empress - 10 Wheel - 17 Star.
The cards below are from the Smith-Waite Tarot Deck, Centennial Edition, in a tin. Served up on a crooked chair cushion in uneven light. But you get the idea. 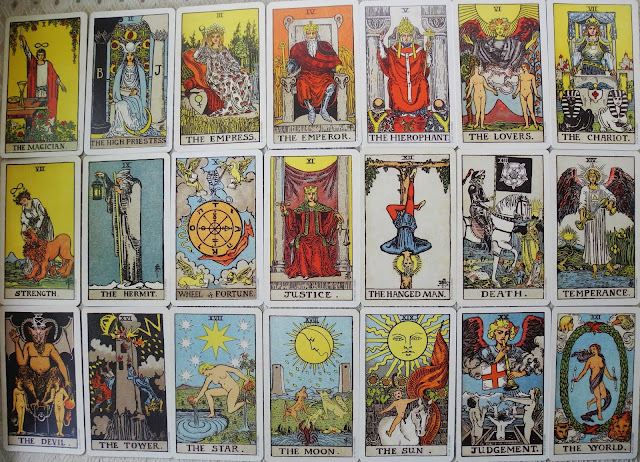 What I am going to do is show you, in three Majors-only decks, the pivot-point cards where each row ends. Racing, taking a breather, the finish line, if you will.
These are Chariot 7, Temperance 14, and finally the World, 21.


No brilliant expositions, no new theories, no arguments. Just these images.
I leave the thinking to you.

At the end of the first row of seven, the Chariots. Il Percorso translates to the Path, the Route. Interesting that in the final two cards the Chariot appears to be moving backwards, to the left. 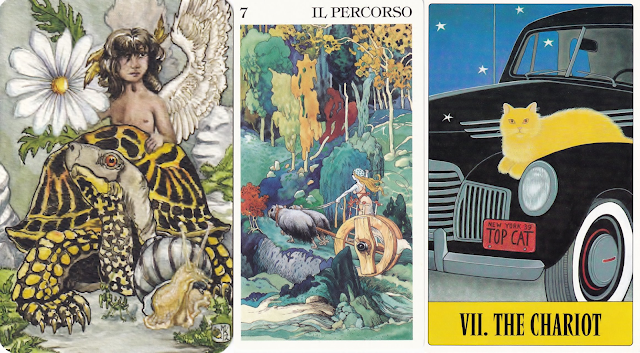 Completing the second row, at number 14, is Temperance. L'Anima (The Soul). While most Temperance cards have water or liquids moving from one vessel to another, it's rare to find the characters actually under the water as we see here in the first two examples. 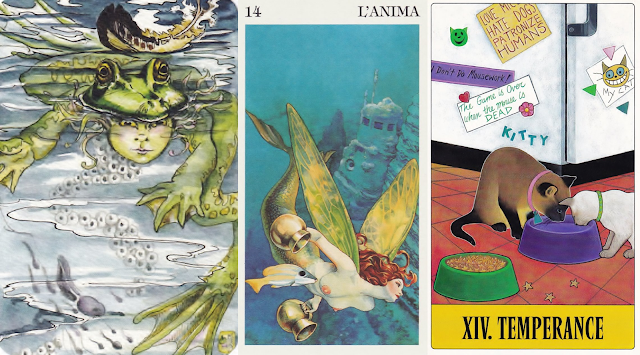 And finally, the Fool's Journey concludes at 21 with The World, or Il Labirinto, labyrinth or maze. Our cat presents the most conventional World card of the three. 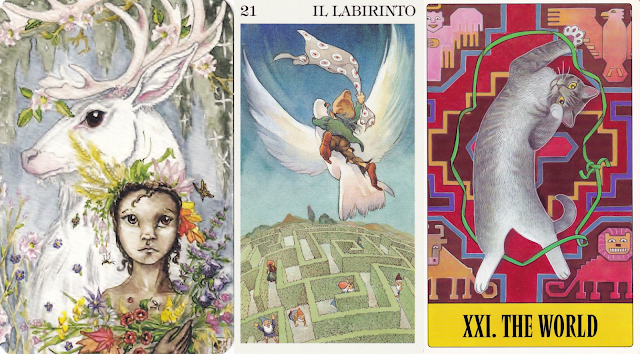 It seemed a shame to leave these three unusual decks without showing you a few more cards. So here are the Hermit 9, and Moon 18, the first cards I look for when opening a new deck. Neither one is my year card or birth card - I just like them! 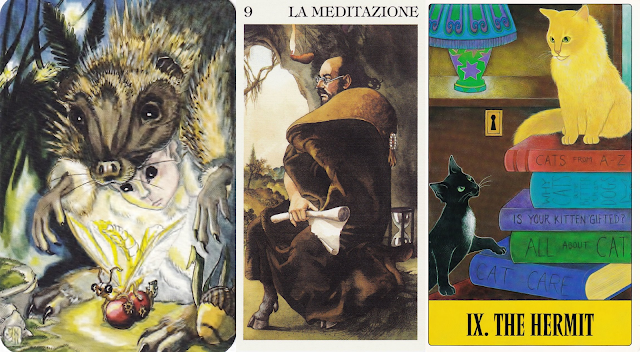 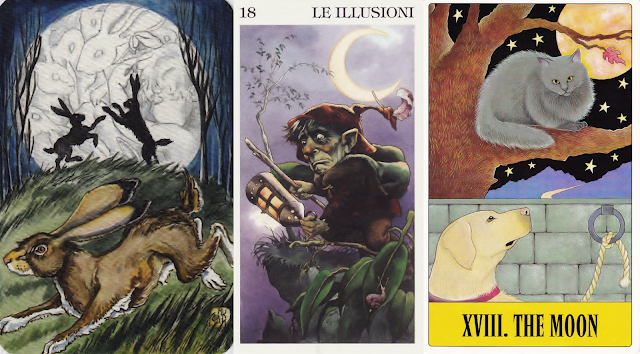 
Ta-da! Introducing new shelves for tarot decks and books, their assembly courtesy of my darling and helpful daughter. Many of these decks were so relieved to finally get out from under all that other stuff. 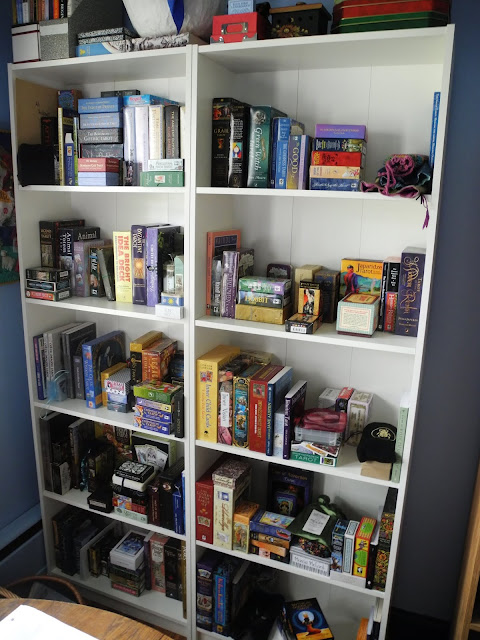 and N to U 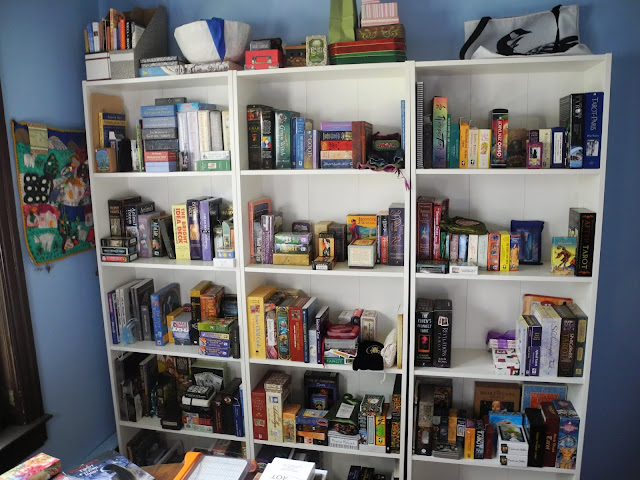 and finally, V to Z 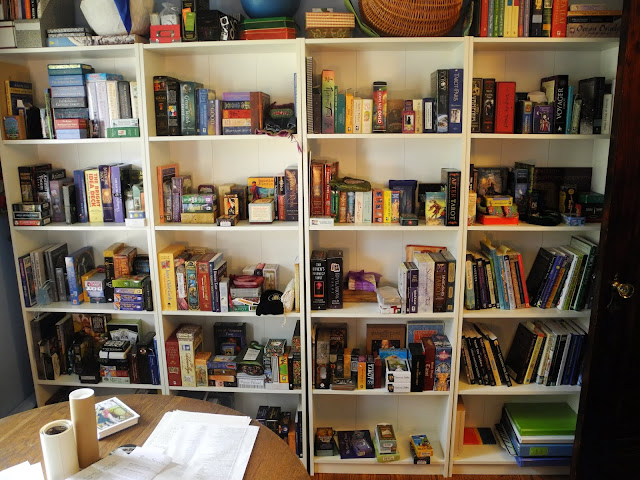 My brain is drained.
It's too nice out.
My creative juicebox is empty.
I don't feel like it.
My muse is on strike.

In other words you're too lazy.

That's one way of putting it.

Just get to work.

Because you said so.

Five years ago, when you started this blog.

The Pros & Cons of Aging, with the Golden Age of Hollywood Tarot

My birthday was this weekend. A reminder that I'm getting older, as if the mirror weren't enough. 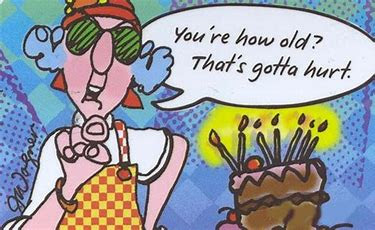 I've started a list. The Cons are much easier to come up than the Pros. No surprise there.

Con #1
My upper arms have developed a life of their own. 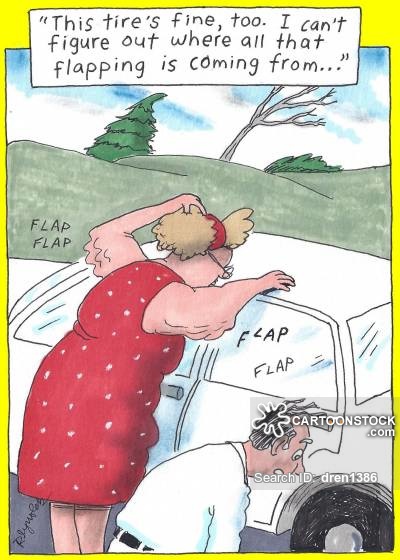 Pro #1
No more shaving. There are so few hairs left growing on my legs that tweezers can handle it.

Con #2
I considered getting henna designs painted on my hands, but the age spots were multiplying faster than she could paint.

Pro #2
No one notices old women, so I can skip the eye liner.

Con #3
My pantyhose were bagging around my ankles. I bent down to fix them and realized that I wasn't wearing any.

Pro #3
Since I've retired from teaching kids, I can swear more.


What deck for this topic?
The Tarot of the Crone came immediately to mind. However, its mood is serious, and this post will not be. I need a somewhat kooky one. Oh where is the Maxine Tarot when you need it?
The Phantasmagoric Theater Tarot? It's kooky, but I want humans for this post.
The sassy Vanessa Tarot? Too young.
The Housewives Tarot? Getting closer...

I've got it! The Golden Age of Hollywood Tarot. If I ever had a "golden age" it's long gone!
OK Hollywood, tell me a story because that's what you do.

Once upon a time there was a woman who liked to think of herself as young and glamorous. But it was difficult for her to keep up that illusion because memories of how she'd looked in her prime, and nightmarish visions of what was yet to come, intruded on her peace of mind. And those dreams about gorillas didn't help...
"Maybe I should cut down on my drinking," she thought. 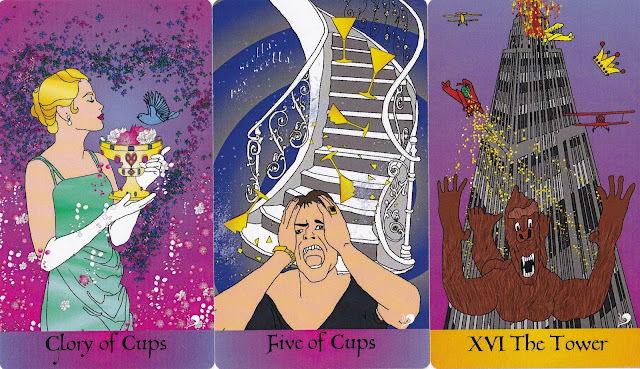 One day a fairy godmother appeared to her, bringing this instruction: Action!
"What kind of action?" the woman asked.

"My dear, do you not have friends who are aging gracefully? Look at them and you'll see that they, too, show signs of wear."
And with that, the Birth of Wands disappeared in a colourful pouf of smoke, only to be replaced by another Fairy Godmother, this one afloat in a sea of blossoms.
"Have you something to tell me too, Birth of Cups?"
"I have, Earthling. Each birthday is a time when your life takes its first step into the upcoming year. Rejoice in it! Think of the adventures! Drink wine, eat cake!" And the Birth of Cups Fairy floated up and away in a whirl of petals.
Drink more, not less? This was confusing. And the woman wondered why her Fairy Godmothers were naked when Cinderella's always showed up in a nice dress. 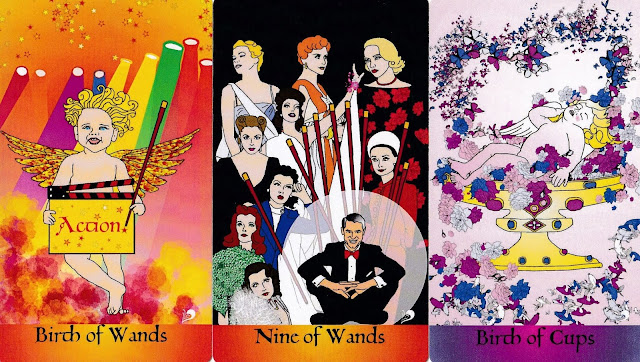 The woman then turned to her mirror, and saw, not a crone alone with her wrinkles, but a vibrant woman surrounded by friends. Apparently it was a Most Magical Mirror, since we've already established how saggy and baggy she and her friends were.
The next two cards offered these words of advice:
"Yes, a facelift is tempting. But expensive. And we've all heard the stories of what can go wrong."

"Start enjoying the life and the look you have, or you'll turn into a sour old woman with baggy clothes." 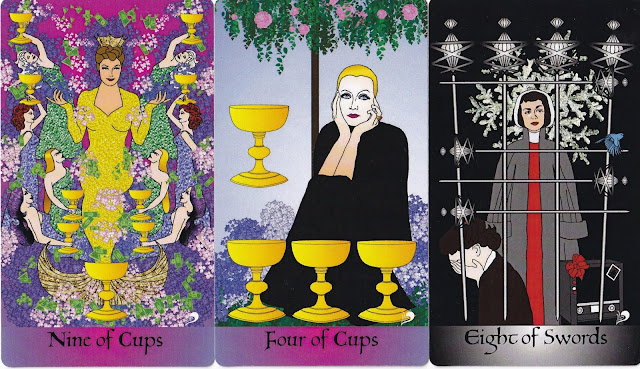 The final word goes to Alfred Hitchcock.
"Bloody hell, woman, quit fussing and get on with it." 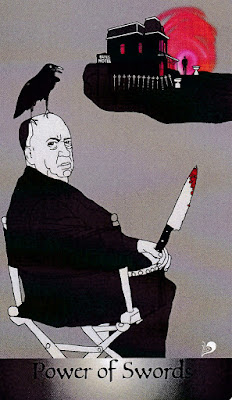 First: the generosity of the tarot community.

After Readers Studio, many people post pix of their haul of goodies from the Conference. Of course I watch these like an avaricious magpie. In many of the pix was a beautiful tin, a gift from US Games to the participants. I love those tins! And the artwork on this one looked fabulous; just had to have that deck. 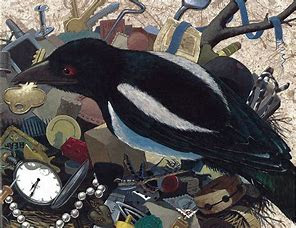 So here's what happened:

The Zillich is a somewhat unconventional-looking deck, at least for someone whose comfort zone is Rider-Waite-Smith-based. But I am absolutely in love with these watercolours!

It's borderless (a plus for me) and the cards fill the tin right to the edges, unlike some of the other decks in US Games' series of decks in tins.

Hello, Zillich Tarot. Are you ready?
Prince of Wands We are indeed - all fired up and ready to go. Let's get things rolling; my fellow cards and I are ready to fly! 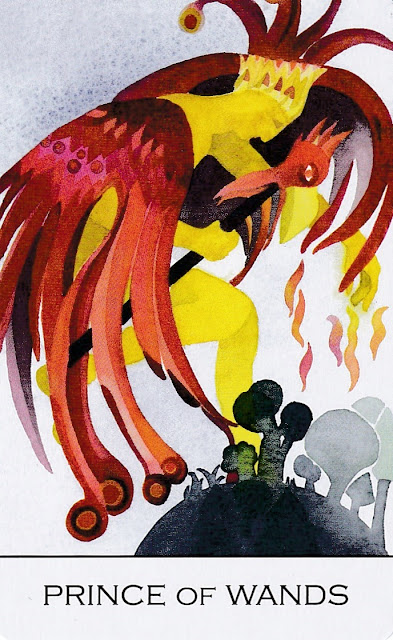 Your images lie off the beaten RWS tarot path. Do you anticipate non-Thoth readers having difficulties?
Three of Wands The virtue of a beautiful card is that a reader will always find something of value in the image, whether it's a familiar one or not. As you see here in this Three of Wands, we have the bold and bright mingling companionably with the more reticent blooms. Seeing into a card is for everyone, if they but choose to look with fresh eyes. 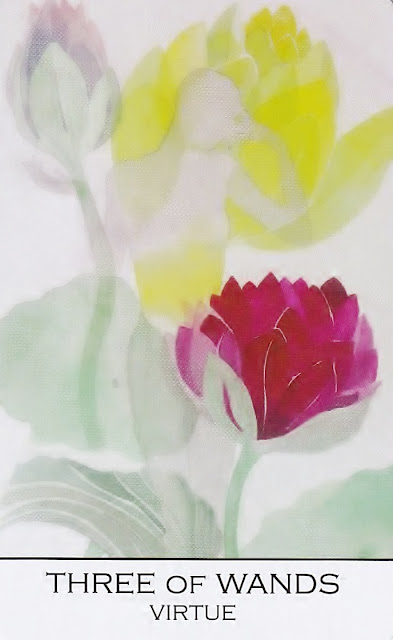 Your little white book says that your creator, Christine Zillich, is also a pianist. Is this her?
Eight of Wands We don't know, but this young woman is running free, either toward or away from something, or perhaps both. Commuting between the arts of music and drawing? I would say that having fingers in more than one artistic pie makes for a deeper pool of expressive experience to draw from.
On a lighter note, a musical scale runs from do (re, mi, fa, so, la, ti) to do. Eight notes, one for each wand? 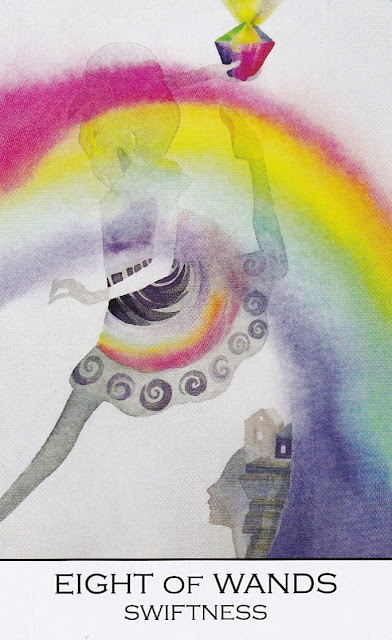 Is it demeaning to you if I admit that I picked you for your colours, and not your smarts?
The Hermit IX We don't judge. Your reasons are yours alone, just as my thoughts belong to me. I will say that we welcome you, however you came to be with us. Our watercolour drawings may have drawn you in, but I believe that the quiet beauty of our soulfulness will keep you here. 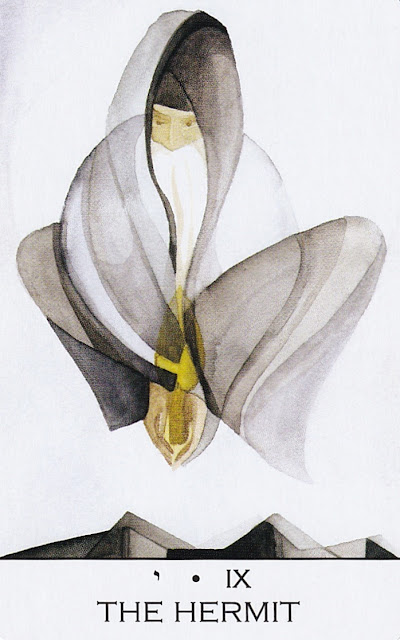 Do you mind if I show people more of your gorgeous paintings?
The Moon XVIII  They are dreamy, aren't they? We're rather fond of them too. By all means, exhibit us.
And please remind your readers that, like the sting of a scorpion, too much staring at a computer screen can be dangerous. Real life may become confused with the illusions fed to us from the online world.
That's not very cheerful, Moon.
You're right; my apologies for the unwonted sidebar about the illusory qualities of the Moon. Please enjoy the rest of our gallery! 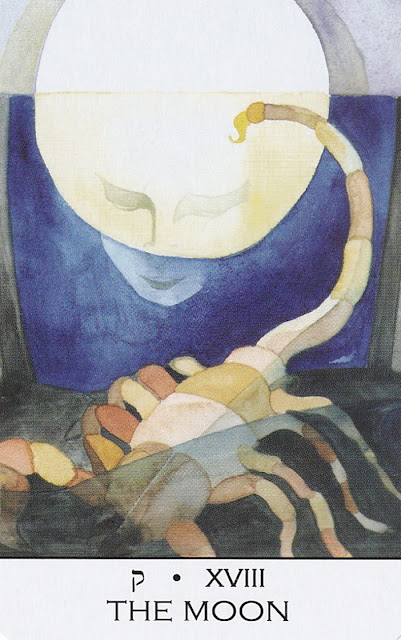 Thank you, Zillich Tarot, for coming in to talk with me today!

This weekend was our 40th annual Art in the Park, sponsored by the 100-year-strong Rotary Club. Volunteers run school bus shuttles from two parking lots every 10 minutes for two days, and give a little update on the charitable doings of the Rotarians while we enjoy the free ride.
People boarding the buses are empty handed.
People offloading from the buses after a trip to the Park are not!