Justice 11 as a tipping point

If you take the number 11 and tip the 1's toward each other ↗↖ at the top, you get what looks like the base of a teeter-totter. Or a fulcrum in physics. Or a tipping point. 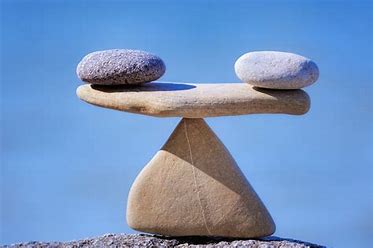 I like Justice at 11 (as opposed to 8) because it sits at the exact centre of the Major Arcana, with cards 1 through 10 on its left, and numbers 12 through 21 on its right. It feels fair, even, balanced. And yes -  Just.

Playing around with my new Game of Thrones Tarot this week, I had an idea about Justice and tipping points and balance, and how it might make a spread.

But first I have to back up... to Nancy Antenucci's book, Psychic Tarot: Using Your Natural Psychic Abilities to Read the Cards. (It sounds a bit woo-woo, I know, but it's often very down to earth and accessible, even to those of us with loud overbearing sceptical critics living in our left brains). She has an interesting way of presenting the Fool's Journey which really clicked, and started me thinking about this.

Ideally we'd carry each and every lesson, beginning with the words of wisdom from the Magician, accumulating them as we go. Never losing any of the good bits, stuffing them all into our little Fool's knapsack.

And then along comes Justice 11 - the tipping point - where the balance begins to shift and we slide down into the next set of life lessons. As I said, this is the ideal scenario. For most of us (probably all of us) the ride up isn't this straightforward, smooth, or short! 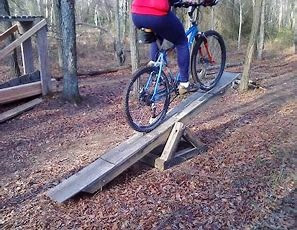 And what if you aren't ready? What if there are gaps in your development, lessons that you balk at because they make your gut twist just thinking about them? What if missing bits and pieces from cards 1 through 10 are going to mess you up and bite your butt going forward?

Find Justice in your deck (it may be #8 - that's OK). It's the centre card.
Shuffle and deal two more cards, one on either side of Justice.
The one on the left will point out some possible hitches preventing you from going fully forward.
And the one on the right will give you some pointers for lightening your load and making the leap. 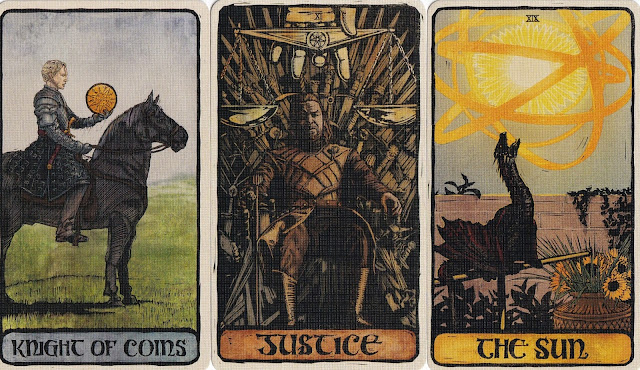 First - the dead weights, the impediments. It's the Knight of Coins, in this case Brienne of Tarth. What about her personality or way of looking at the world could hold you back from successfully making the jump into the second half of your Fool's Journey? 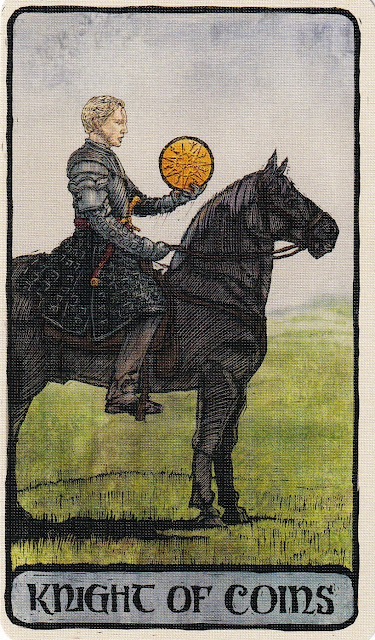 I'm going back to the first ten cards, because that's where we'll find her particular weaknesses. My first run-through involved checking in with each and every card, 1 through 10. It was starting to look like one of George R. R. Martin's novels! Now it's pared down to just those few that stood out.
II High Priestess: Does too much of your life revolve around following someone else's rules or doing another person's bidding? Have you sat yourself down recently and thought about what feels right for you?
III Empress: Are you tired of blocking off your softer side? All that armour!
VI Lovers: Is trust missing in your life? Are you able to lean on another person if necessary?
IX Hermit: Are you good at pushing, pushing forward, but not so hot at questioning why?


Now let's look at the advice from the third card, over there on the other side of Justice. It's The Sun XIX, with one of Daenerys' baby dragons, named Drogon, singing his fledgling roar to the sun. What's that he's ROARING? 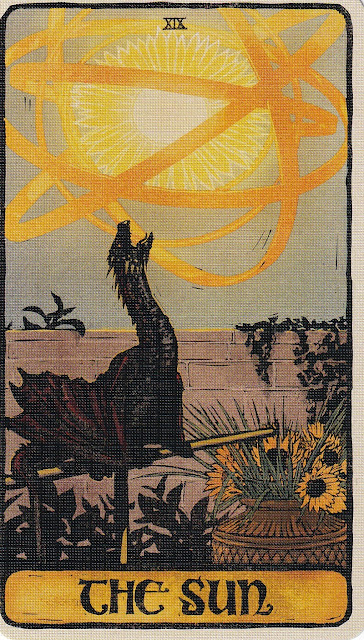 RELAX! Unhunch your shoulders and unclench your jaw. Maybe even do a bit of singing!
Allow yourself to stop and smell the sunflowers.
Revel in your successes so far. SHOUT FOR JOY!

The Canadian Brass were in town this weekend. I bought my tickets last fall, just to be sure, because they don't get here that often. Even though four of five members are new since I last saw them, they still have their unique blend of mellow brass sounds, great arrangements, and just the right amount of schtick. For some of that goofiness, tune in around the 6:00 mark here!