Some links to a few things I enjoy:


Duolingo, where you can mess around learning new languages at your own pace, for free.


Ukulele School, also free, with a tuning app in case you forget how the strings are supposed to sound.

And some deck review posts from the past that you might not have seen:

A friend has kindly lent me her old phone to use as a small, light travel camera. I've been practising with it. The button you push to take a picture doesn't require much force, compared to my 'real' camera.
Somehow or other, while attempting a clear night shot of a mysterious red window one street over, I managed to take one-hundred and fifty-one of these, most of them sideways. I don't know how that happened. 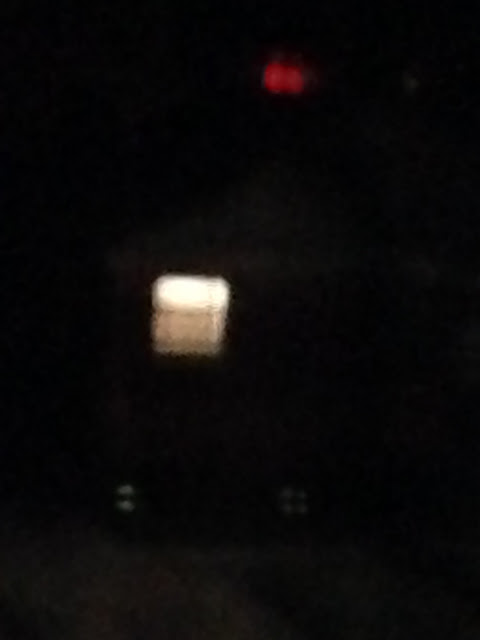 The 152nd is a bit better. I don't know how it happened, either. 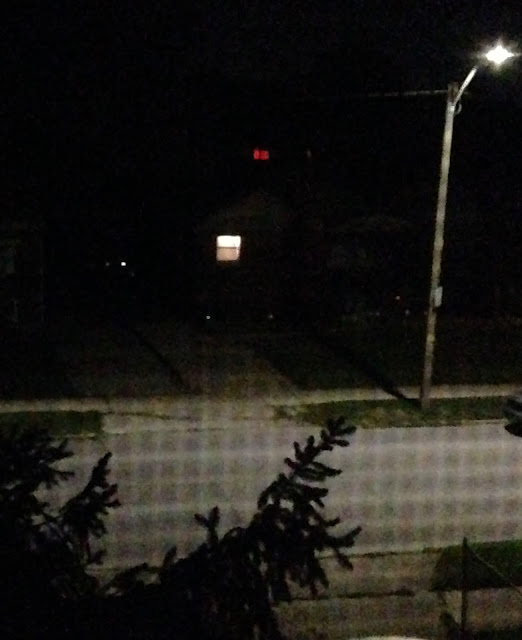 I wish for you a few little mysteries in your life.

I had planned to have a YouTube presence by my 200th blog post. It seemed such a loooooong way away at post #159. Tons of time, right?


Well, none of that happened. So this post, instead of being the first blog after the YouTube-grand-unveiling, is about procrastination. I might not be very good at deadlines or to-do lists, but I'm an EXPERT at procrastination. (Unless it's about eating brownies; I never stall at that.) 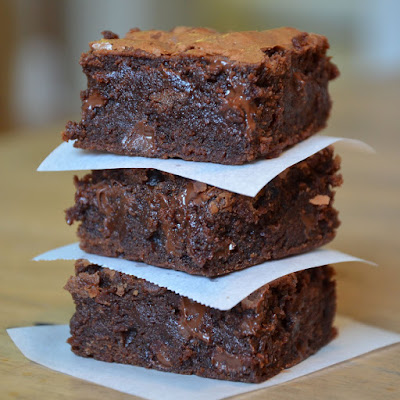 In an effort to get this YouTube thing off the ground, I signed up for the delightful Michael Nobbs' Resurrecting a Creative Project course. That I'm behind is not his fault! (He lives in Wales and has DONKEYS for neighbours - have you ever...?) 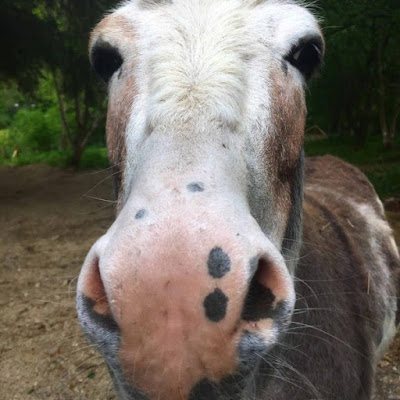 What would be a good spread for studying the ins & outs of procrastination? Let me think...

1. What character flaw is responsible for this pervasive dodging of doing?
2. Is some incident in your childhood at the root?
3. How can you outwit this stubborn disinclination?
4. Miscellaneous thoughts on the subject

Now a deck. A no-nonsense, let's-get-this-show-on-the-road one. Like the Tarot of the Sidhe (side borders trimmed) for some spiritual/emotional butt-kicking and maybe the Bright Idea deck for plain old practical advice.

1. What character flaw is responsible for this pervasive dodging of doing?
Sidhe ~ Wheel of Fortune 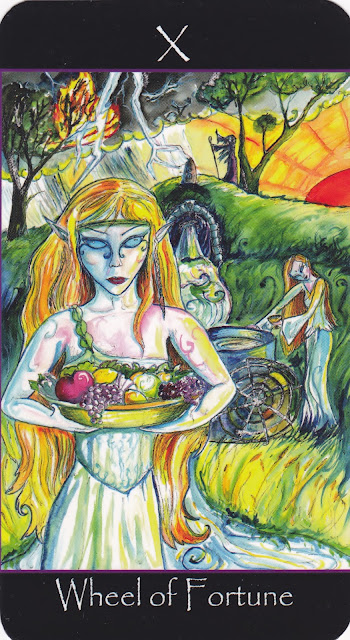 Whew! This is not a flaw - it's the luck of the draw! Some people are born to put things off and some aren't.

The Maiden is offering gorgeous fruits, which will not wait. Get your task done and reward yourself with the fruit before it starts to rot. 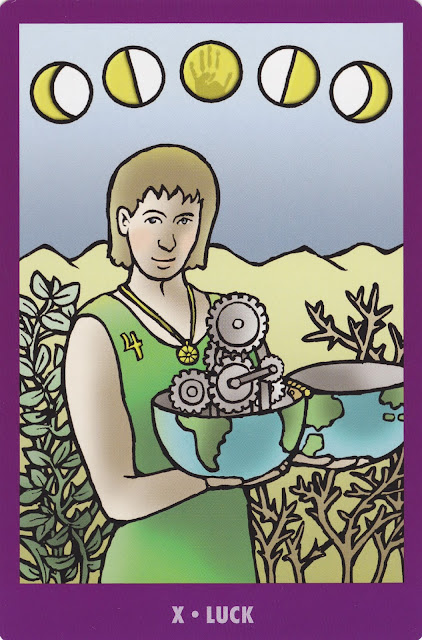 The Earth's gears keep it turning, the Moon runs through its phases, seasons change, time moves on whether you're keeping up with things or not.

Being a staller, a procrastinator, has nothing to do with being lucky or unlucky. It, unlike time, is within your wheelhouse. And that, luckily, is something you can control!

2. Is some incident in your childhood at the root?
Sidhe ~ The Chariot 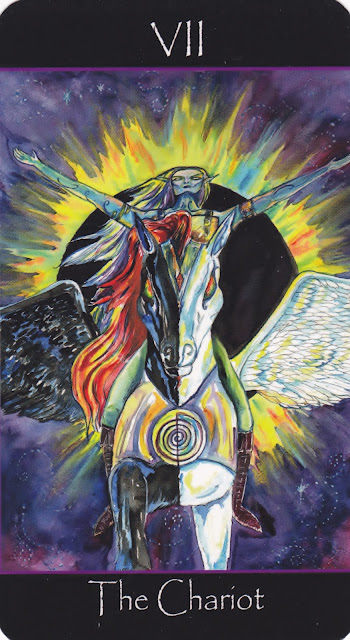 Well, I never stole a horse and ran off with it. Nor a bike, a car, a wagon, a grocery cart. So that's not it.

Did I, at some point in grade school, think I was invincible, unstoppable, not subject to the deadlines that applied to lesser folk? Not that I know of.

Did I rely on some external force (Mum, the nuns) to blast in and make me do stuff on time, so that I never learned to make my own deadlines? (This is definitely a cop-out. Blaming this on the warping influences of childhood!) 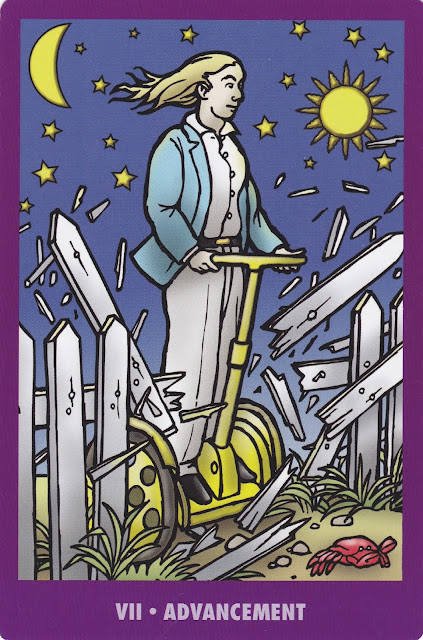 Did I wreak some havoc as an impetuous teen because I failed to WAIT and TAKE MORE TIME to think about the possible consequences?

Was I hell-bent on doing something despite parental warnings?

Truth be told, this seems like something my brother would've pulled off.
Maybe that's it! Watching his quasi-legal antics was enough to put me off!
(That's right...blame your brother for this...)

3. How can you outwit this stubborn disinclination?
Sidhe ~ Dreamer Princess (aka Page of Swords/Air) 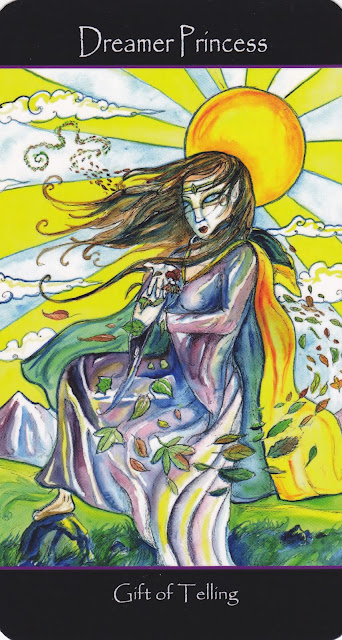 One of the things I cherish about this Sidhe deck is that all the Courts arrive as 'gifts'.
This Princess is offering the Gift of Telling.
Telling about what? How to outwit my long-standing proclivity to procrastinate? That would be nice.

The Dreamers in this deck are the Air suit, You can see all the breezes flowing around her as she sends leaves to me.
Leave off thinking you are stuck with the way things are.
Leave old habits that don't serve you.
Have you taken leave of your senses? Of course you can outwit this silliness! And I'm here to tell you so! 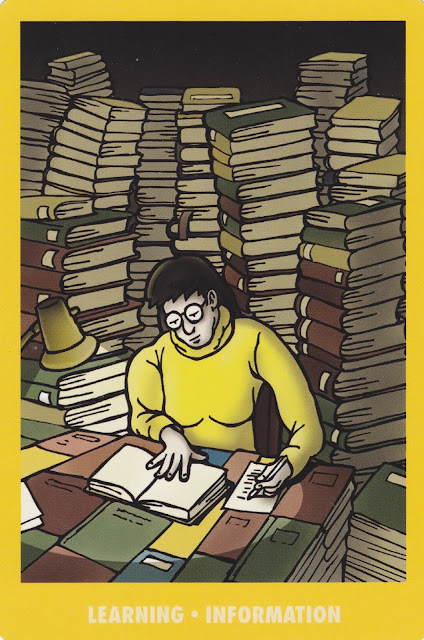 In these days of the internet, there's no excuse for not finding out stuff.
You want to know more about why you stall? Look it up! Find a source!

I'm here to tell you that the information is out there waiting for you, if you're not too busy whining about not doing anything to do anything!


4. Miscellaneous thoughts on the subject
Sidhe ~ Warrior Ten (aka Ten of Wands/Fire) 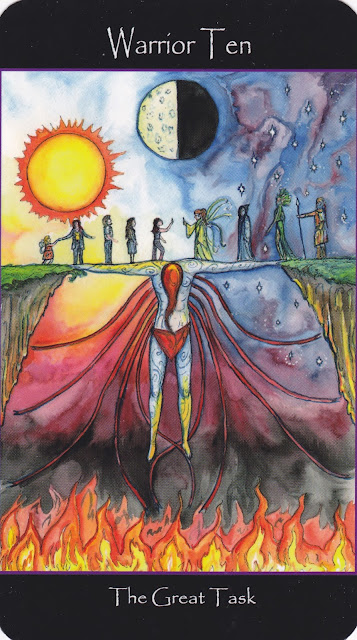 Well, as you can see, this is hard work.
This Sidhe is supporting many others with sheer willpower. They are relying on his strength, yet don't appear to realize it or even notice him. That is, indeed, a great task.

As for you, Teawoman, I suspect that the job of putting off the job is sometimes a greater task than just getting down to it. Those who are waiting for you - possibly nagging, yakking about deadlines gone by, urging you to hurry up, etc. - will simply walk away and no longer be a burden. 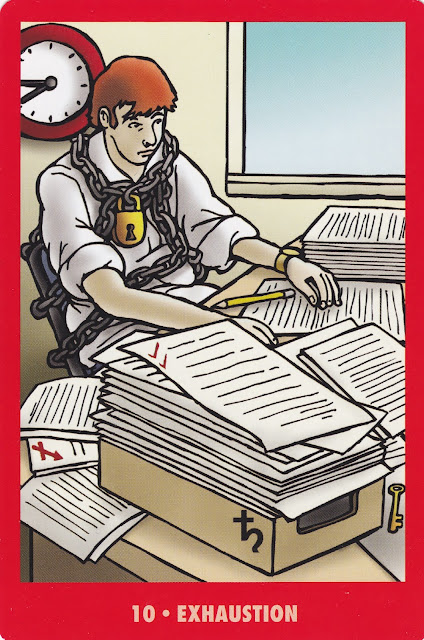 If you didn't put off working on the paperwork that came in on Monday, and Tuesday, and... you get the idea...then you wouldn't still be chained to your desk at 7:45 on a beautiful Sunday morning.


See that little key? The key to your freedom?
Well, guess what? It's yours for the taking! Clear the mess, grab the key, ditch the chains.


How's that for a Bright Idea?
You're welcome.

Monday was Thanksgiving Day here in Ontario. I'm thankful for the creativity of Emily. 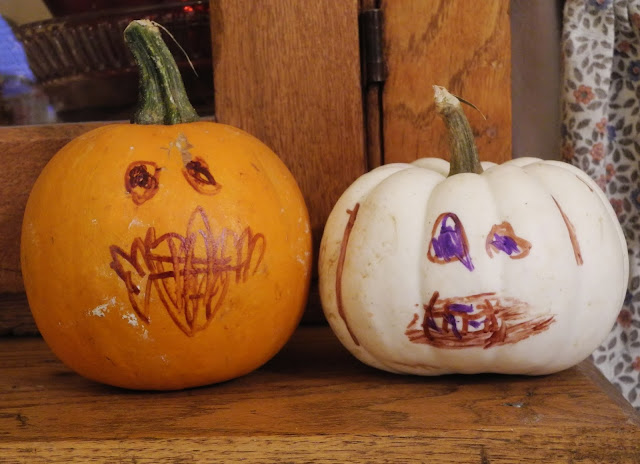 From the Bard to the Big Apple, with the Shakespeare Oracle Tarot 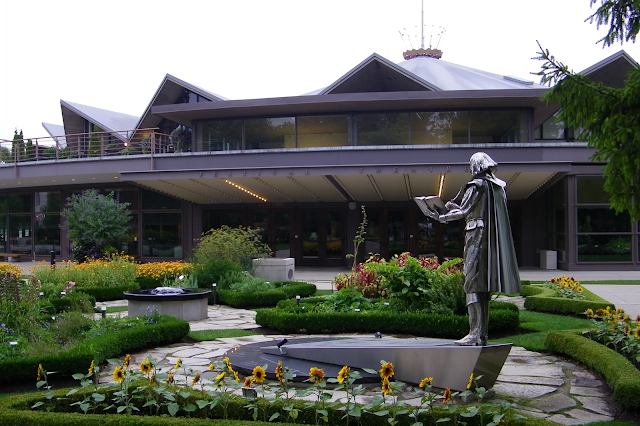 From Romeo and Juliet to Guys and Dolls - that was my Tuesday in Stratford, Ontario. Between shows I dodged Canada Goose poop on the walkways by the Avon River, and witnessed a Mallard duck take a bite out of a swan's butt for no apparent reason other than that the huge white posterior presented itself. 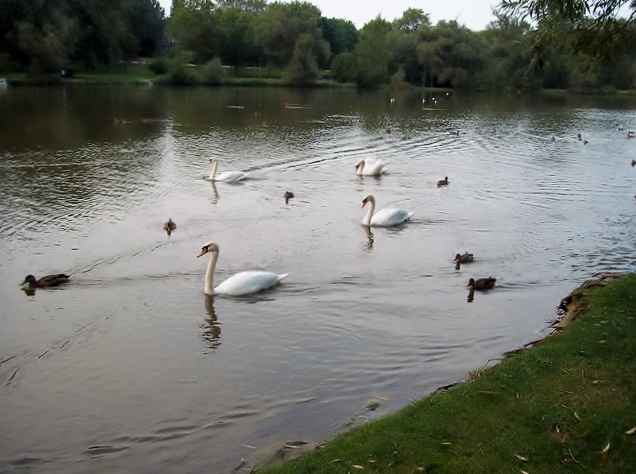 
What does The Shakespeare Oracle have to say about these two tales of love's tribulations
separated by almost four centuries? 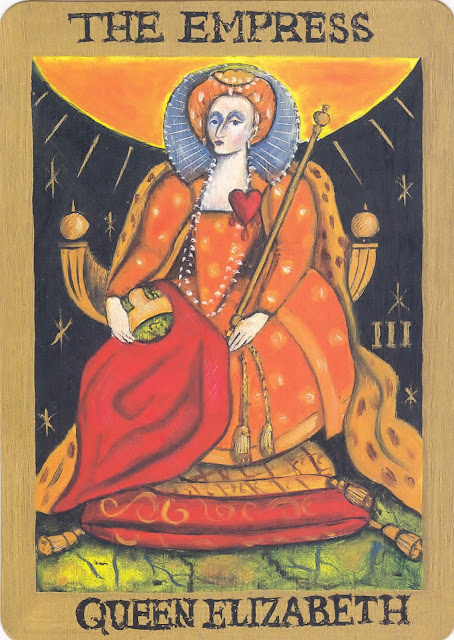 R&J
Plays were performed at the pleasure of Queen Elizabeth I. She loved them and so they were tolerated by those who wanted to close down the theatres. All that debauchery! All those lowlifes acting the parts! But if the Queen was pleased, the play ran for a full week, and the players got to eat and pay their rent.


G&D
The queen is no longer a regular in the audience, and even without her patronage its first run on Broadway racks up an impressive 1200 performances.
The lowlifes have moved into the plot, and sometimes the actors themselves are almost like royalty. (Another neat transposition!) All the world's a stage - well, that hasn't changed.
Verona, London, New York - they're all fair game for the pens of the playwrights.

Full frontal nudity? That wouldn't come along for a few centuries after Romeo and Juliet, but mere decades after the chaste Guys and Dolls. Did you have to be XXI to see it? I don't know! 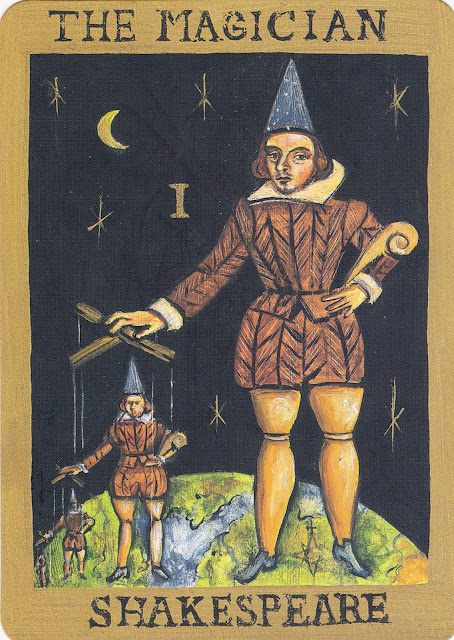 Yes! magic happens on those stages!

Oh, we know the blood is fake and the swords aren't sharp and the punches don't actually land and everybody is just pretending to hate each other or love each other and nobody in real life talks so much while they're dying or breaks into mind-boggling dances without impeccable choreography and tons of rehearsal but...if the actors are convincing and whole-hearted in their roles, we are puppets in their hands. 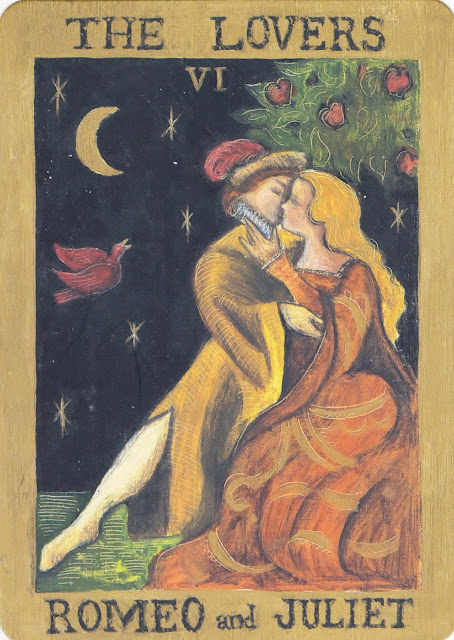 And speaking of love...what gramma's heart is not pierced with sheer joy when her 6-year-old granddaughter says, out of the blue, "I love you, Gramma."