Every month or so, a newsletter by the creative Nancy Antenucci pops into my inbox. Her most recent one includes what I think is a clever way of putting the often unwieldy tarot court cards to use.
Today I'm focusing on the Pages, from my summer deck of choice, the Everyday Witch Tarot. This deck makes me happy just seeing it laid out on the table! Just what you want for summertime, right?

Nancy says, 'Use each of the Pages in their certain element to determine what part of you is starting to surface or feels like a risk.'

I've decided to make the question What part of me is surfacing AND feels like a risk? 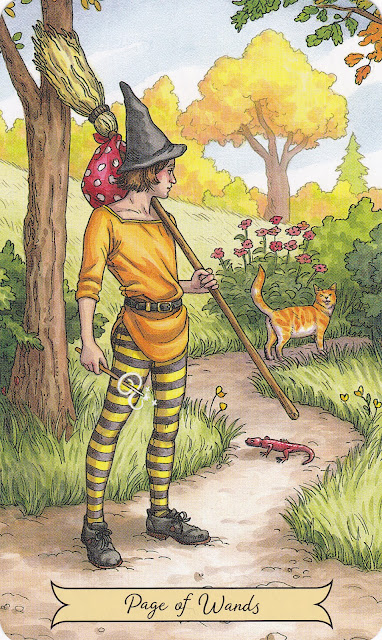 I love that this Page holds a Fool-like bundle over his shoulder and a tiny magic wand in his hand as he contemplates the entrance to a curvy where's-it-going? path. Oooo, so lushly flowered and deliciously inviting. Just jump over that teeny tiny fire-lizard and catch up to your fun-loving marmalade cat!
Wands-Fire: action, energy, passion, desire, and for me, looking at this image, WANDerlust! That's what is surfacing in my newly-retired mind!

Waaaait a minute! Are those leaves already turning? Is something wintery hidden around the bend? Is it wise to follow my cat-guide into the unknown with only an itty-bitty magic wand and a few possessions? Don't know. Is it scary? Indeed. Am I up for it? Ummmm..... 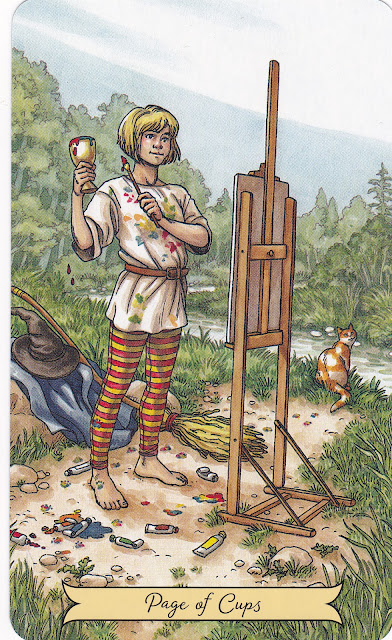 Oho, another connection to my colourful retirement plans - painting! I just LOVE the look of watercolours! As luck would have it, friends and I recently attended another friend's opening at a local gallery, where I bought one of her smaller, unframed watercolours. She felt so uncomfortable taking money from a friend (I'd rather just give it to you) that I spent the rest of the evening thinking up ways to make her feel better.

How much nicer to have the work of artists I actually know in person hanging on my walls.
I get Airmiles on my Mastercard for this purchase.
OK, how about a trade. Will you show me how to do a watercolour wash? Bingo! Win-win!

What am I afraid of with this Page of Cups? Well...not much. The risk of getting stabbed with a paintbrush seems rather low. And I don't really care if I'm any good at it (painting, not stabbing) so my ego is safe. Worst case scenario? Paints all over my clothes. No problem - that's what the babbling brook is for. 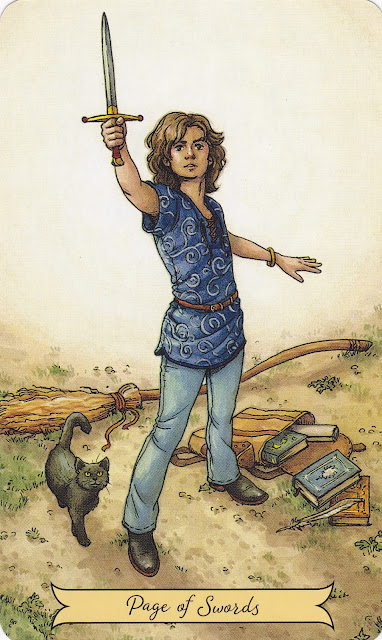 What have we here? A defensive stance - unusual for a Page. But look at that bag full of books and a quill pen and paper - my kind of travel kit for sure.
Swords-Air: communication, writing, thinking, planning, worrying, stewing.

What is surfacing? This Page is on the move. (There's the travel notion again.) All those books? Research, or finding authors from other countries I'd like to visit, or filling in the time on a really long train journey. Maybe this Page has written that delicious trilogy of books himself. Wow, there's something to aspire to!

So why's the sword out? Perhaps I'm defending my right to be a booklover to my very core and own a million books and prefer fat tomes to skinny ones. Since you ask, yes, I DO decide which books are going on a trip before I know what clothes to pack. And I'm defending my right to write, if I so choose. Or if you're a bully and want to steal my books or throw them onto a bonfire or tear them into little pieces - begone, scum! 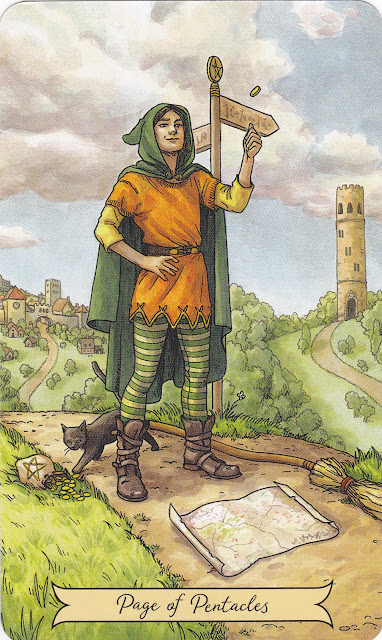 Even the slower-paced Page of Pentacles is on the move (or will be soon!).
Pentacles-Earth: finances, how and where you live, your job or how you otherwise fill your days, security, family, health and welfare.
This Page has saved up money for his travels, he's bought a map, his travel cloak hood is already up, and all that's left is to toss that coin! Which way? Which destination beckons?

What seems scary to me about this? Projecting my own travel fears onto him ~
Will he be alright on the road?
Is where he's going safe for travellers?

Hey everybody...QUIT TALKING ABOUT THE END OF THE SUMMER!

It happens during each of the seasons, but is particularly LOATHESOME and UNWELCOME during the summer. Yes, August is still the summer. The days are still long compared to most of the year's.

I don't want to hear about the shortening of the days, the cooling of the temperatures, the harvesting, the moving into the dark time of the year, the preparing for winter. NONE of that stuff!


Yes, I KNOW that the wheel of the year is turning.

I KNOW that after August comes September, then October, then a pile of cold weather. Just stop trying to make it go faster, will ya?

Here I am, minding my own business, adjusting the A/C, washing shorts and tank tops, buying peaches and corn and field tomatoes at the market, making a list for the next cottage excursion, trying to wring EVERY LAST DROP out of today, and someone's out there yakking about next month, next season.

AAAAAAAAAAA! Everybody just QUIT IT!

The same goes for seeing back-to-school stuff in the stores when the school bus engines have barely cooled after their end-of-year run, or Christmas displays across the aisle from the Halloween candy, which in turn is being set out while the kids are suffering through their first day of school. So you go on ahead and gallop over to some other month if you want to. I’m staying right here in wonderful hot fantastic summery August until it... isn’t.

Whenever I'm steamed (or tired or thirsty or sad or exultant or...) I pour a big mug of tea. So, from Marcia McCord's Tea Tarot, I've drawn two cards to simmer me down. Let's see what they have to say.

Oh you poor thing, you look like you could use a nice cup of tea. Come, sit down and we'll have a good chat. Would you mind bringing over that plate of cake, the one on the kitchen table? There - thank you, dear. I always find a little sit-down at this time of day to be so soothing - don't you?
Ah, breathing easier already.


This popped up, begging to be heard.

Now listen here, you - that man or woman or waitperson or tearoom may not be your cup of tea, but I love it there. The same goes for the passage of time - we each have our own way of dealing with it. Some of us dig in our heels, like you, and others stride and glide right through. We need all types or the world would be so very dull. Yes?
She's right. Deep breaths. Relax shoulders. Put the kettle on. 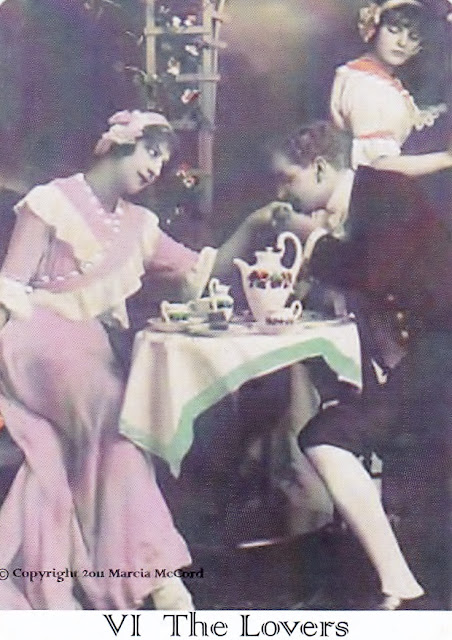 The world's largest rubber ducky came to neighbouring Amherstburg this weekend as part of our ongoing Canada 150 celebrations. Not sure what the duck connection is, but it was a delightful afternoon! 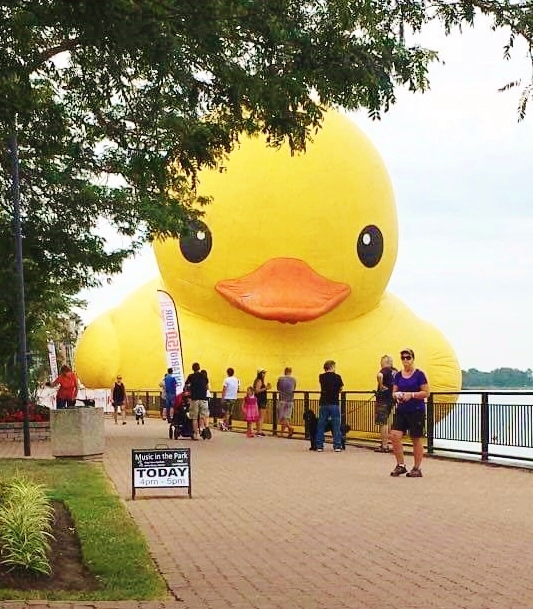 I have famous wallpaper

It's true. My ancient water-stained bit-raggedy-around-the-edges grass-cloth wallpaper is in the movies. 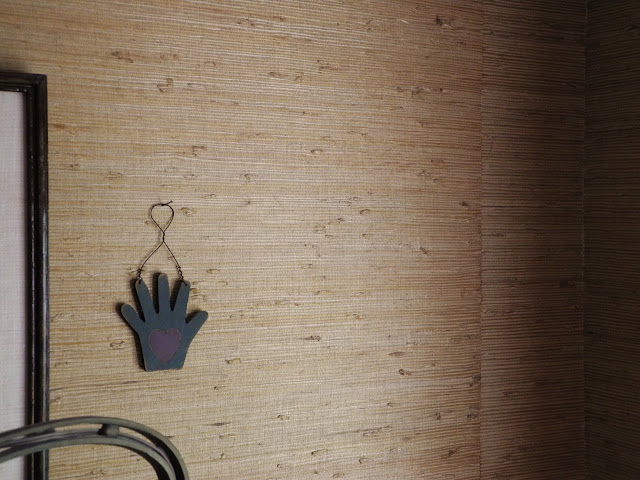 1) Right now I'm watching The Magic of Belle Isle, with Morgan Freeman. He plays a well-known author, now a drunk, who won't write a word since his beloved wife died. His long-suffering nephew found him a cottage, free for the summer, in a little lakeside community. In the living room? My wallpaper.
(Please excuse all the wavy lines; I don't know how to take a picture from the TV screen. I'm sure my nice camera could figure it out, if I'd ever let it off  'auto'.) 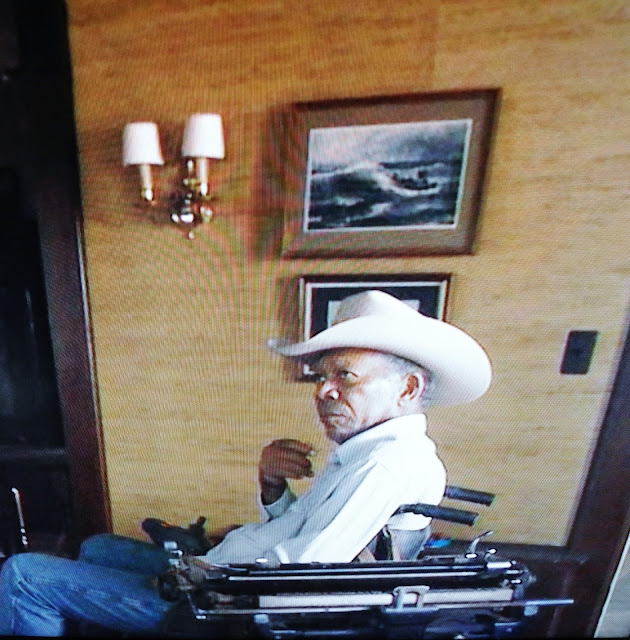 2) Sally Field. I like her work. In Brothers and Sisters she plays a loving and interested/involved/nosey mom to a brood of adult kids, who are in and out of her big California house all the time despite having lives of their own. The entryway? My wallpaper.
(No picture - sorry - returned it to Family Video without thinking - you'll just have to take my word for it.)

3) Monk - series 2, episode 2 - 'Monk Goes to Mexico'. Sleezy hotel room with a cockroach on the pillow instead of a mint. My Sharona and my wallpaper. Which I must admit I find a bit insulting; couldn't they have found a more...appealing motel if they're going to copy my decor? 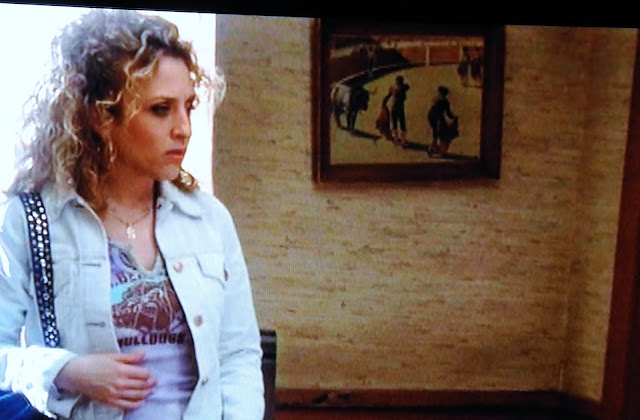 So that's the wallpaper story. When do we get to the tarot part?
That's a very good question. Still looking for that magic segue...

OK, here goes.
I have, in my house, famous wallpaper. Famous wall paper.
And also, in this very house, there are books by famous tarot people.
They are on a bookshelf against the wall.
And the books are made of paper.
(Not the greatest - but it's summertime - one's thinking gets a little loose and undisciplined.) 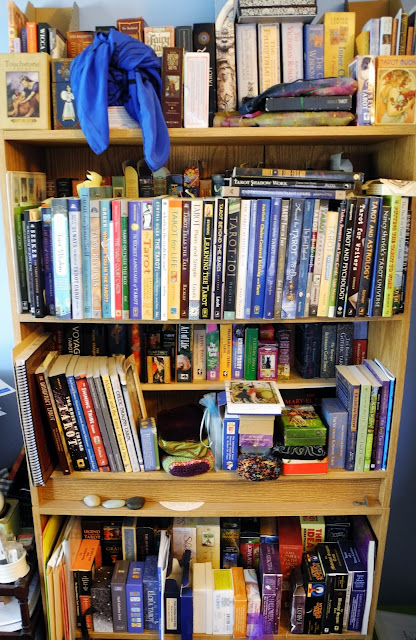 This is going on in the backyard. 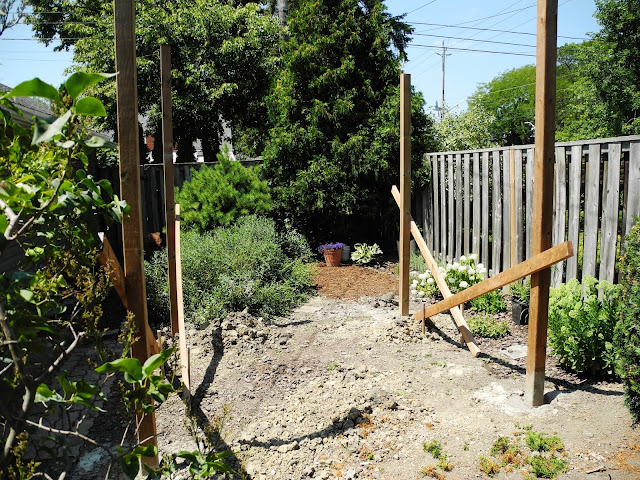 And this graceful creature was on the wall by the outside tap. It`s rare to see one of these around here. 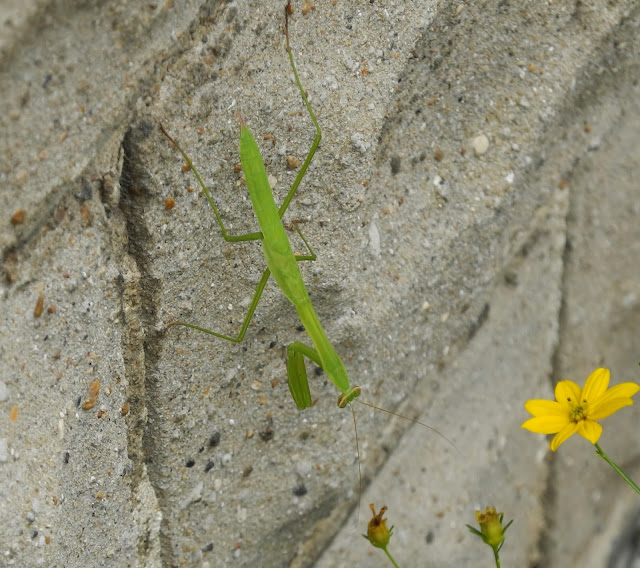