Summer is flying by - in tarot images! 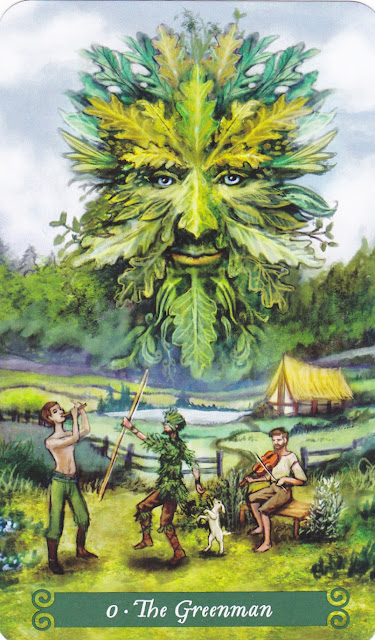 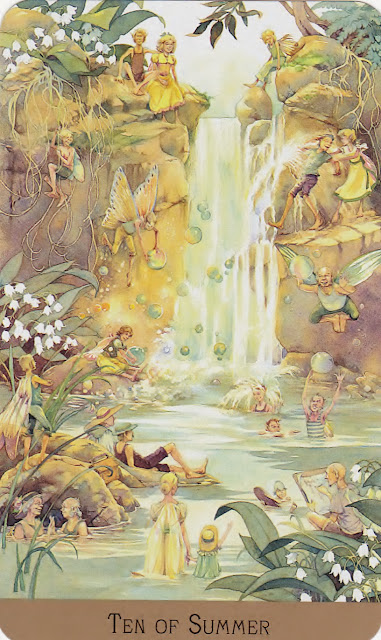 Is there anything quite like summertime, when the livin' is easy? Nope.
(The voice on this woman - oh my)


from the Victorian Fairy 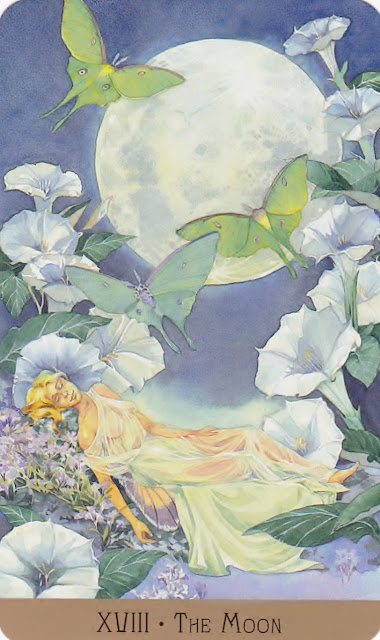 and the Green Witch 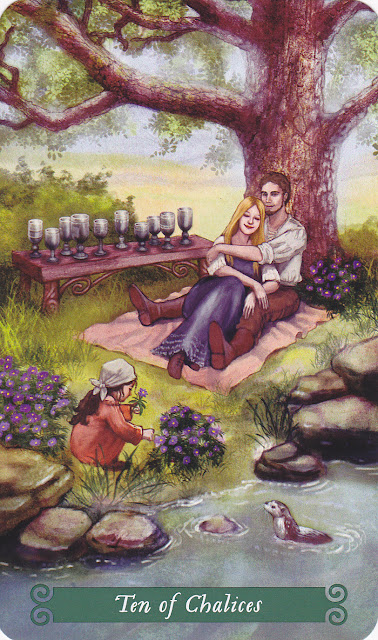 But alas, it fleetly flies and is all too soon gone. Grab hold of it while it's here! 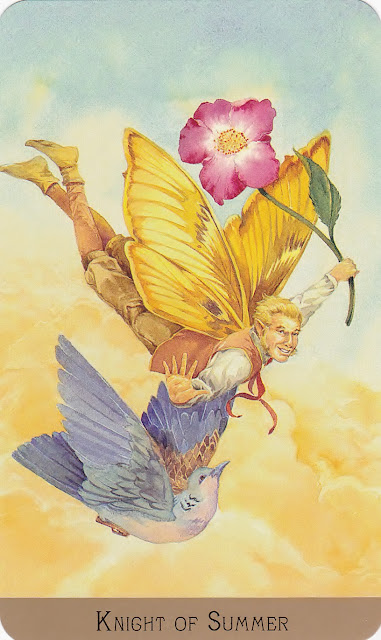 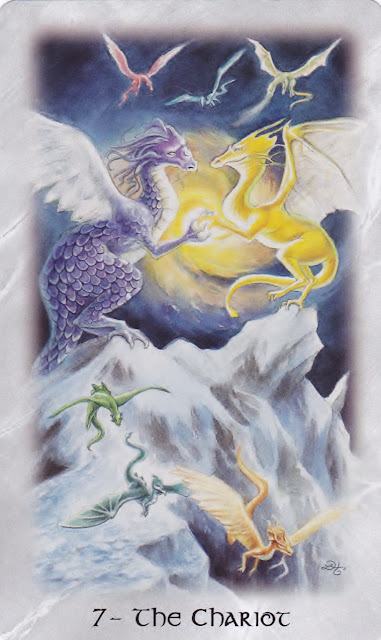 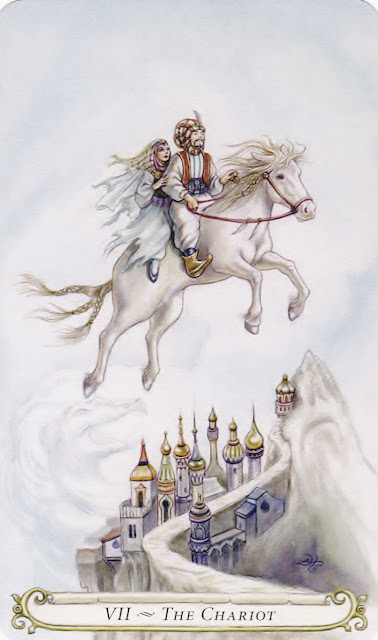 Tarot of the Crone 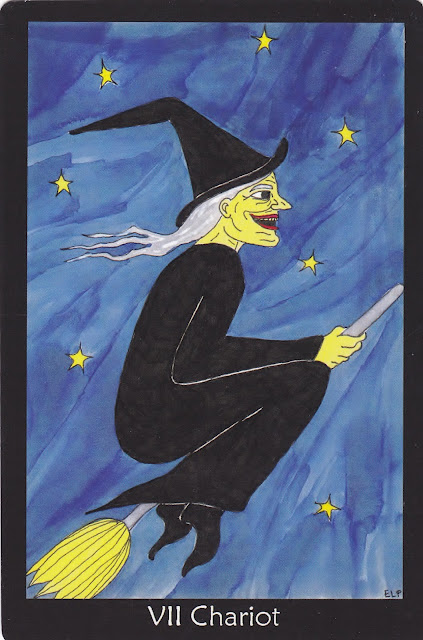 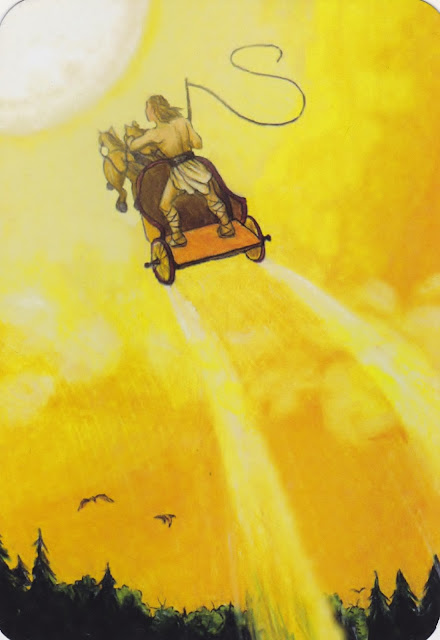 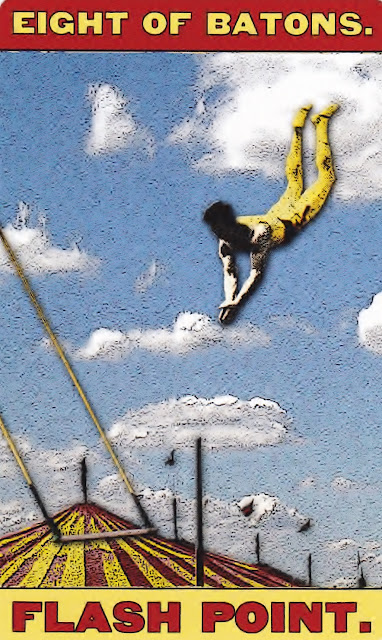 and from the Wild Kuan Yin Oracle (I just love this) 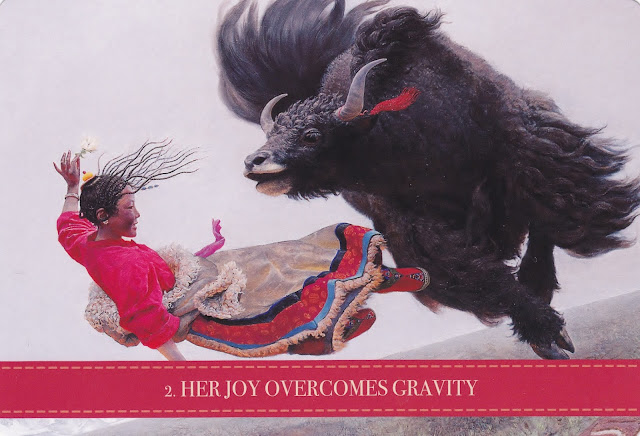 NEVER EVER expected to do this...with commentary by the Tarot of the Crone

From grade one right through until university I went to an all-girls' convent school, yet despite that daily dose of Catholicism never ONCE gave a thought to becoming a nun. I've since moved way far out from any kind of religious belief, but even in my unlapsed Catholic grade school years I was anti-missionary.
We'll build you heathens a school and teach your kids lots of great stuff, including our particular brand of religion to replace the inferior beliefs you now hold.
No, thank you.

Why am I yakking about this now?

Because, in the space of a single week, I have gone from:
1) holding the opinion above
to
2) meeting a remarkable nun who has worked at her order's mission in the Dominican Republic for 60 years
to
3) booking a flight to spend nine days living in the convent where she lives and maybe helping out in their music program.

I feel oddly compelled to do this. It tugs at me (dangerous undertow or excited child - I don't know).
Why?
The adventure-seeking mindset of the newly retired?
Perhaps.
It happened so quickly that I didn't have time to change my mind?
Possibly.


I'm going to the Tarot of the Crone for this, since both the sister involved and I are pretty old and crone-y. (not cronies, but who knows?)
What on earth possessed me to do this? (Or maybe the impulse is not of this earth?)

You've got to see these 3 cards side by side. 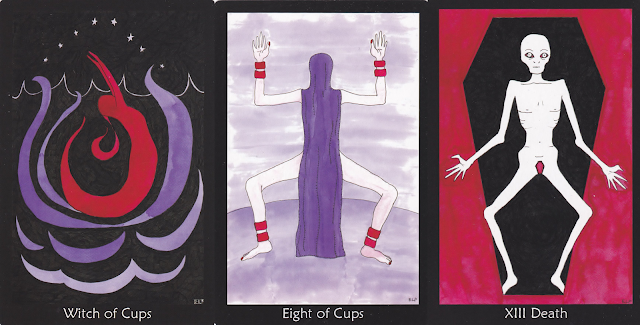 The Tarot of the Crone is a colourful deck, yet these three cards have only black/white/red/purple.
(This reminds me of that poem by Jenny Joseph:
When I am an old woman I shall wear purple
With a red hat which doesn't go and doesn't suit me.)
There's just one person, centred on each card.
Has the woman in Eight just emerged from the water in the Witch card? Is that why her hair and tunic fall so straight, weighted by water?
Look at the legs in the Eight and Death - the same.
Look at their arms - mirror images.

These three cards are kin.

1. First thought out of the gate - Witch of Cups 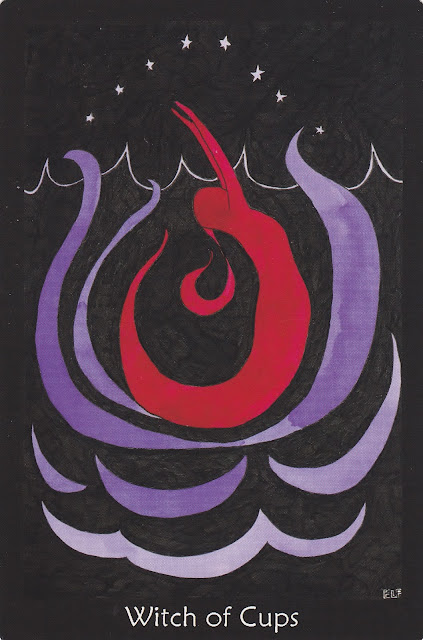 Go with the flow.
Don't be afraid to put your head under water.
Have you ever tried floating in salt water? It's pretty cinchy.
Relax. Let your body stretch.
Sea and sky together - a magical combination.
When was the last time you experienced the ocean? Too long.
Feeling buoyed up.
Look up!
It's OK if it feels like your feet aren't on solid ground.
The ocean is swell. (ha - couldn't resist)
Swim with sea creatures. (but not sharks)


2. On second thought - Eight of Cups 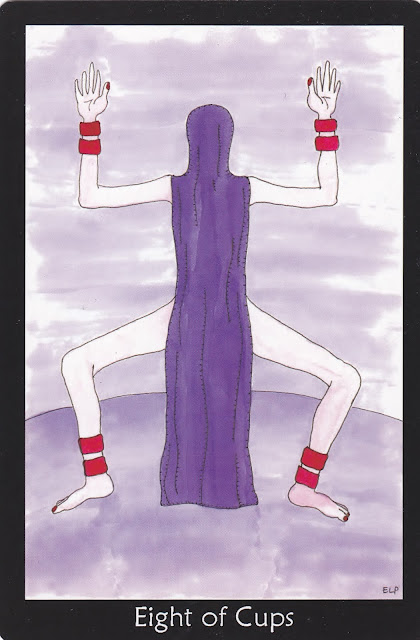 More cups. As in "I feel oddly compelled to do this."
I could use some opening up to new experiences.

Facing ahead to the great exciting unknown.
What's out there? I dunno.
Mind-bending. Body-bending.

Do they do Tai-chi in this convent?
Who is this mysterious person I will meet?
Why won't she show me her face?
Is this me, looking back at me?

Is this person luring me on? 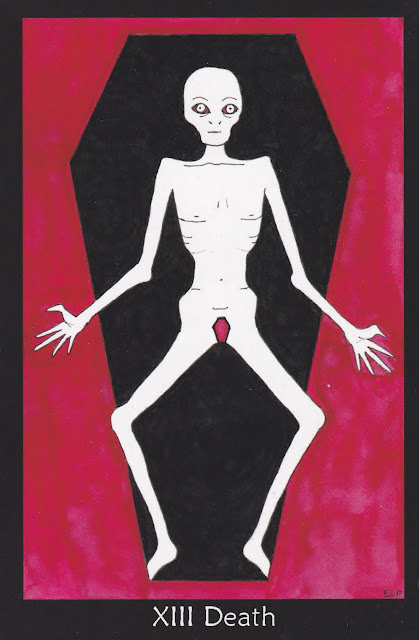 Luring me on to...my death? Certainly hope not!
Spread word - Finally - and the card that responds - Death. Hm.

The image on this card disturbs me. The little patch of red seems sexual. I went to Ellen's LWB for some clarification: "A little red passage of potential rebirth is at Death's groin." OK, good.
I do like what she wrote later: "Deny what is passing and you may never be free, dragging a corpse along with you into your future."
I'm grabbing the idea that I have a future, and running with it!
What, then, is passing as a result of my accepting this unsought opportunity?

Our reporter has been too busy reading The White Magic Five and Dime to go outside and look around the neighbourhood. She says that this book is a fast read, fun, feisty, full of tarot, and she recommends it!

BREAKING NEWS...
Mackenzie Hall's packet of brochures arrived yesterday. In it was an invitation to learn the Bachata; my curious friend (who'd learned of my impulsive trip only the previous evening) looked it up and it is...wait for it...a dance from the Dominican Republic! As she says, "Spooky."

Reversals bug me, and the BKTYCS

When I read tarot, I mostly look at the pictures. And this is hard to do when they're upside down.
I feel the same way about novels - I don't read them upside down either. 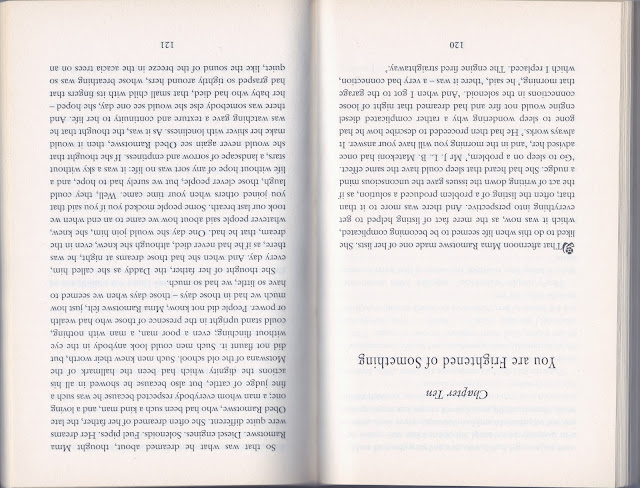 And let's not forget the BKTYCS (Be Kind to Your Cards Society). Really, how nice is it to expect a card to hang around upside down while you hem and haw about what it might be saying? (The exception is the Hanged Man, who would LOVE to be reversed so the blood could finally flow out of his pounding head and back into the rest of his body.) See? 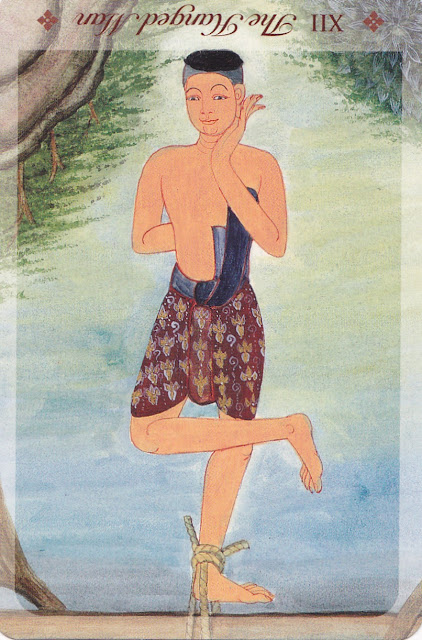 I get it, I understand it - the argument that reversals can expand the range of meaning for the cards. I just don't want to do it. So how can you streeeeetch the span of possibilities for a particular card if you're too kind and considerate to make it stand on its head while you read it?


1) Well, you can ask it to hold out its arms to see how far it can reach in either direction.
What would more of its energy look like? Less of that same energy? Too much? None at all?


Here's the Five of Pentacles from the Everyday Witch Tarot. She's on the move.
More of that energy might take her to the door of the cozy building with the lit windows.
Too much of that same energy and she'll sail right by it and be out in the boonies somewhere.
Less moving energy and she might pace out front all night, never getting into the warmth.
Zero of that will to move, and she and the kid are frozen lawn ornaments. 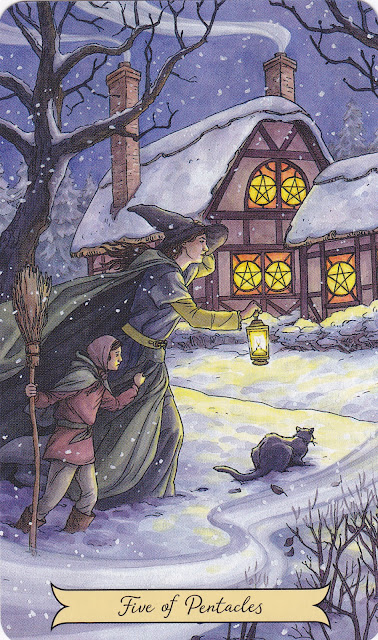 2) Or bring in some friends to stand with it for comparison's sake.
A little less energy, and she's doing nothing, bemoaning her fate. The Druidcraft (fully trimmed) 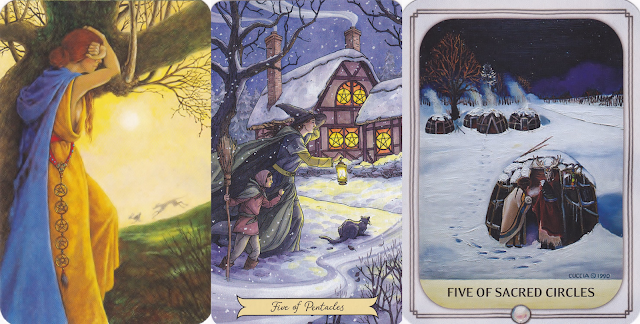 Still less energy, and her mind is a blur. She has no clue what to do. The Good Tarot

A dollop more energy and she's out of the shelter and asking for help. Ma'at Tarot

Zero energy, and inertia sets in. We get the frozen lawn ornament effect. Tarot of Prague 2016
Too much energy and she's ridden right out of town, going around in circles on an overladen donkey. Animal Wisdom Tarot

Note: these are decks that just happen to be out on my tarot table right now. You can compare energies with any decks you have lying around. If expanding the range of a card appeals to you, you'll find an assortment of other posts about this very thing.


The doorbell rings. Probably someone trying to sell me a more efficient water heater. Can you come into my house and take a look at my gas bills? No thank you. I save what's on the computer and go downstairs. My lovely new-ish (it's their first summer here) next-door neighbour is on the porch with a WHOLE BOX of produce from her garden: salad greens and basil, washed, bagged, and labelled, and cucumbers. Ain't life grand!

Serious tarot folk ~ leave now. This post is a light silly summer thing, best suited for this kind of mindset: 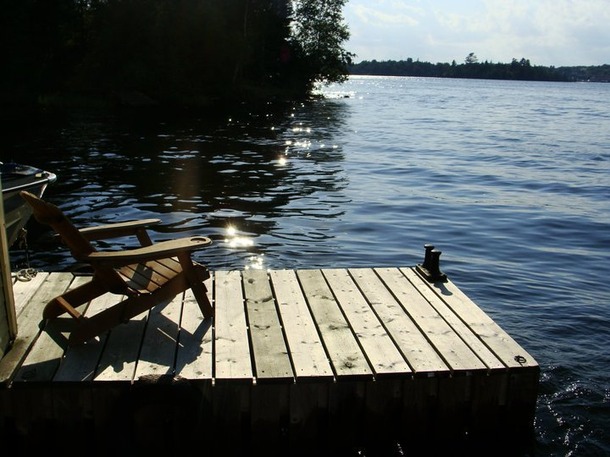 At first glance the Tarot Nova looks too simple to be any good for readings, and there are some pretty dismissive reviews out there. But I like its folk art look, and the pared-down drawings seem just right for what I'm doing today: getting straightforward vacation suggestions from a tarot deck. It comes in a slip-cased box along with a tiny book on reading palms. The whole set-up is sturdy and undeniably cute! 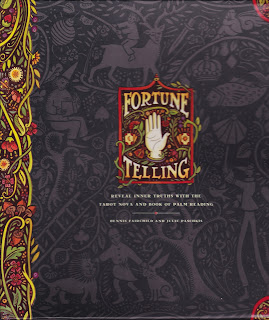 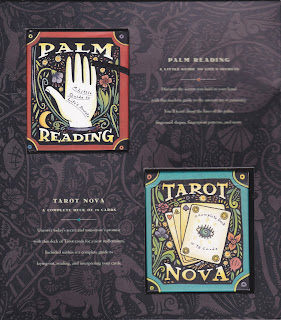 It's getting hard to find, alas.


OK, little Tarot Nova, what are your suggestions for my Summer of 2017?


1) Most extravagant ~ Zero The Fool 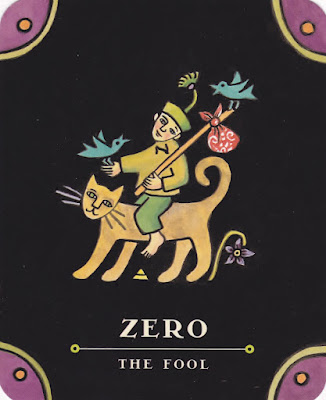 Take off for parts unknown!
Go on a safari
Ride wild beasts
Track down the bluebird of happiness
Sign up for lion-tamer school
Grab your knapsack and ride the rails cross-country 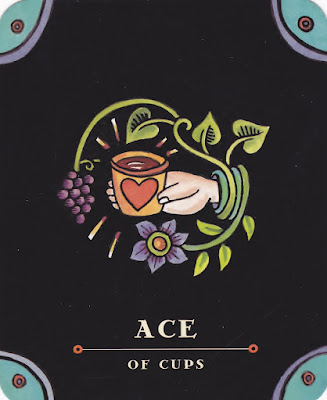 Stay at home and drink tea!
Invite a friend to join you
Enjoy the fruits of your labours
Plant some annuals
Sit under a grapevine
Love what surrounds you
Make sangria 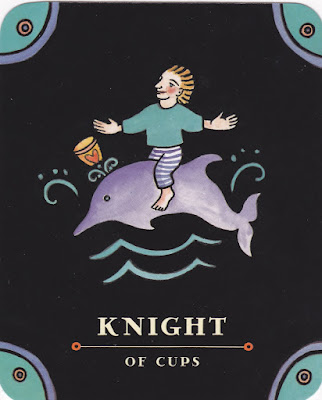 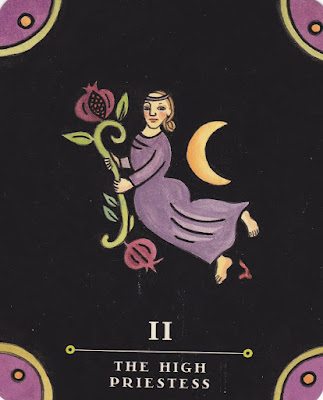 Do nothing in particular!
Commune with yourself
Look at the Moon
Let your mind float
Look at a flower
Look wise
Try a new hair style 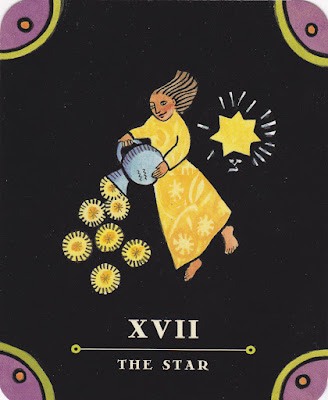 Enjoy! Enjoy! Enjoy!
Be happy with whatever you choose
Water your dreams
Be the star of your own life's story
Smile
Feel the breeze in your hair
Go barefoot

Canada 150 and the completion of what's behind Door #1

This week has been all about Canada's 150th birthday as a nation in its own right, not as a Dominion of the Crown of Great Britain. We're awash in red! Parades, flags, bands everywhere, red everywhere, iconic Canadian songs and artists on TV and radio, maple leaves on...well, everything! And maple bacon everything as well, from perogies to doughnuts to burgers to chips. 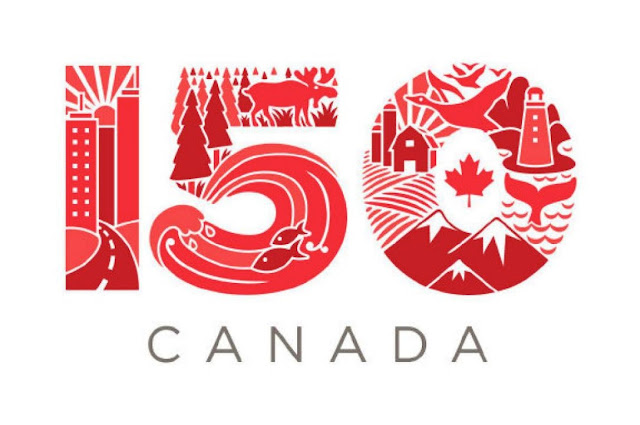 Tarot content this week appears behind Door #1, up top. There you'll find the exciting conclusion of The Seasonal Check-in Phases of the Moon Spread, Summer Edition!

At the Canada Day Parade here in Windsor, granddaughter Emily, suitably attired in red dress with a maple leaf decal on her cheek, discovered that the walkers on the edges of the parade, doling out candy etc. were FAR more riveting than any floats, bands, horses, or dancers that the parade had to offer. Only the Shriners, tooling around on their tiny motorbikes, even came close.
We almost lost her at one point, before she got the hang of getting her hand out in the right place at the right time. She took off, determined, following a guy dispensing sweets to the crowds, and soon her tiny body was lost to sight in a noisy sea of red moving down the crowded street. Dad high-tailed it to the rescue.