This great idea isn't mine. I got it from a super-enthusiastic and creative Readers Studio newbie this past April. She is Veronica Jude, and her video about cutting a RWS deck into small square cards is here.


I'm not a big fan of the Waite-Smith's artwork, but feel like I should be, and keep buying different versions in case one of them will appeal. I had one with borders already cropped - perfect for this experiment. 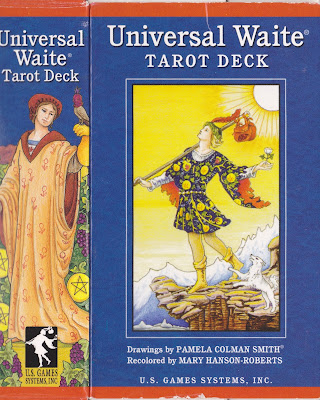 My cards were already cropped right back to the image edges along the sides; all I had to do was square them up and re-round the corners. I made a cardboard template so I could slide its window over each card to decide which 6 cm. square (or 2 3/8") section I wanted to keep. That was fun! and brought new life to some of these oh-so-familiar images. It was an entertaining little craft project, and the cards now make a delightful snap as you place them on the table. (I admit to overdoing it a bit because I like the noise.) 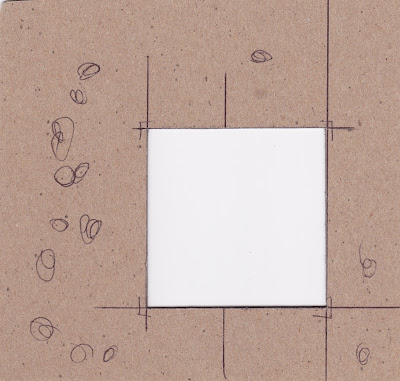 I've been making nine-patch squares with them - 3x3x3 - like a quilt block. I don't normally use reversals, and this is a hoot! There are SO MANY choices when deciding how to read them. Here are just a few, and they change every time, depending on which cards come up in which directions and which patterns your eyes pick up. Here's what I noticed in this particular layout. (These scans were a pain in the butt, btw.)

1. Which suit predominates, or has less representation?
There are two each of Majors, Cups, Wands, Swords. Only 1 Pentacle, and it's upside down. I'm deeming the Pents least important here.
2. Is there more action going backwards (tops of cards facing left) or forwards (heads to the right)?
Three face left and two right. Slightly less forward motion?
3. Any Majors?
Yes, two, and both facing the same way. Significant? I don't know!
4. Any upright?
Two of nine. There's a lot of opposing or undercutting energy, and some of it comes from the two Majors. 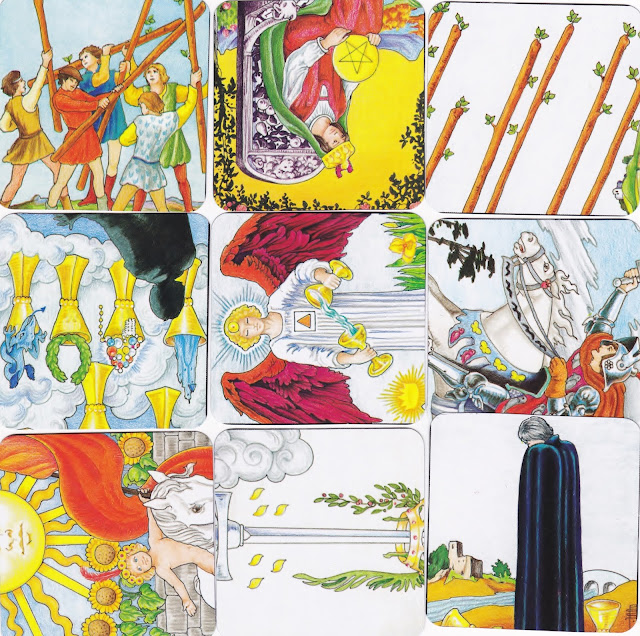 5. Do any of the lines (across, vertical, diagonal) connect with each other in some way?
a) All these have their card tops facing left, and both Majors and the driving Wands 8 are in this line. Perhaps this powerful row is pulling backwards: to slow us down, or to ask us to have another look at something that's already happened? 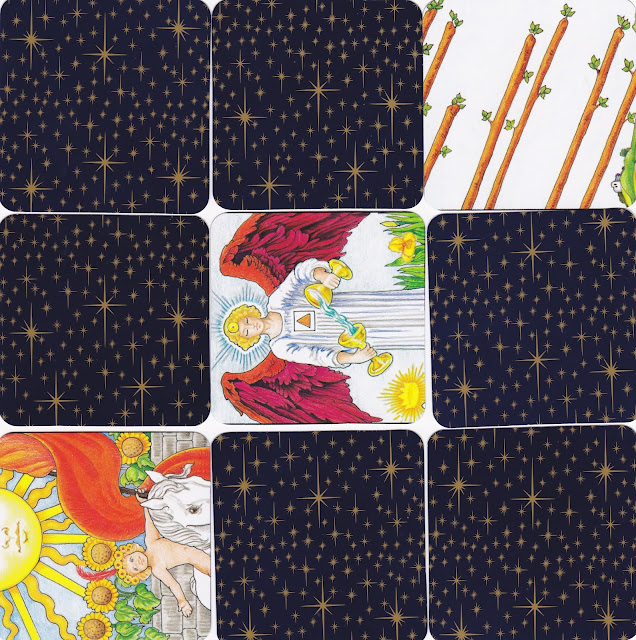 b) This row contains the only upright cards, and the numbers are all the same! Wands 5, Cups 5, and Temperance XIV (14 reduces (1+4) to 5. Another strong line-up. Temperance's water is pouring diagonally; is she draining some of the heated excess energy from Wands 5 and feeding it to Cups 5? 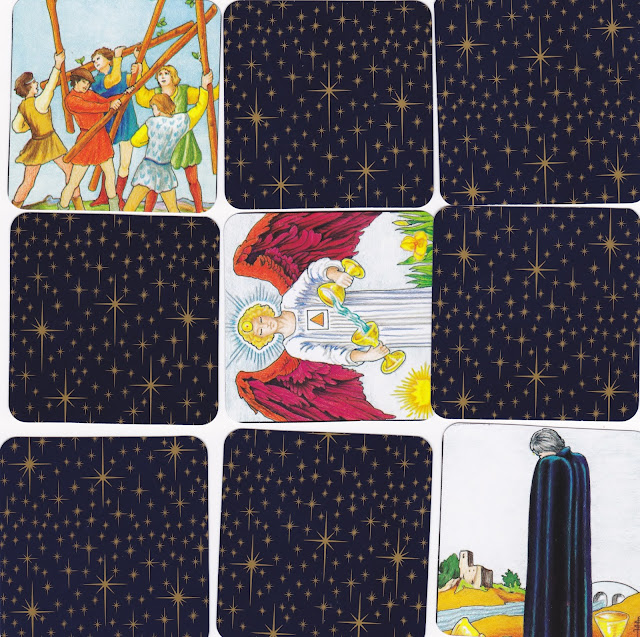 6. Do any of the cards cancel each other out, or support each other? (For this one, I just play around with pairs, keeping their directions intact, to see if some visual connection appears.)
a) I can't decide if this feels like one cancels the other, or if reversed energy from Cups 7 has produced the regrets in Cups 5, or if the images below are a mirror of Cups 5's thoughts.

b) The two Swords, both tops leading to the right. Has the Ace boosted (goosed?😉) the Knight's energy? 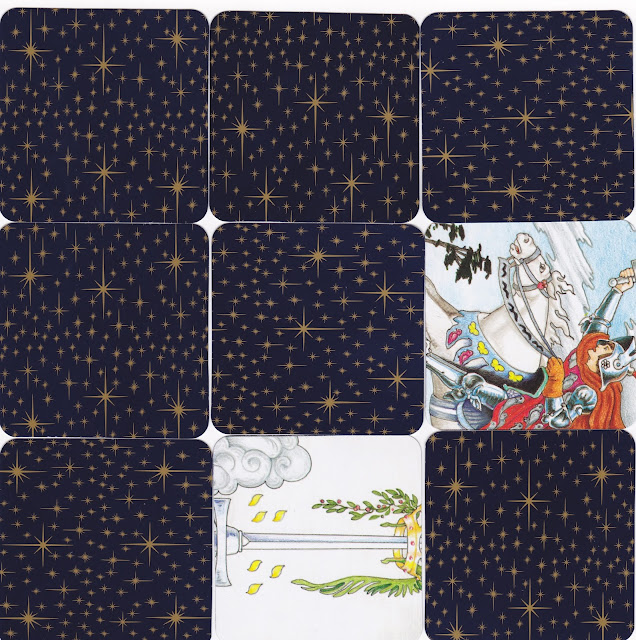 Dealing sets of these tiny cards is a fun activity to practice while watching TV.
It's more like playing than thinking! 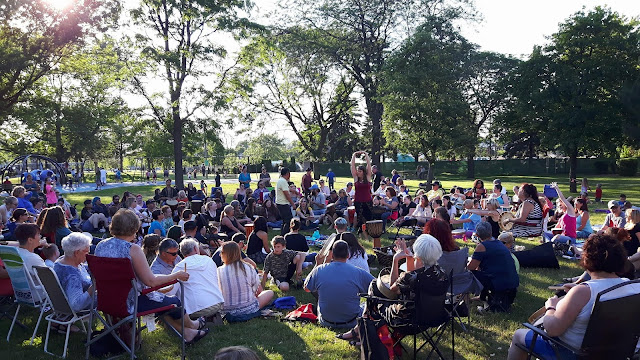 2) First ever karaoke singing! at a friend's retirement party.

A very big week for me, and a new door opens with the Everyday Witch Tarot

Twenty three years of students' piano recitals in this historic courthouse - and last night was the final one. 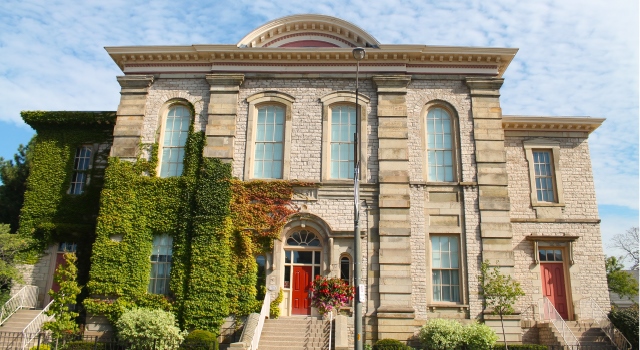 Each spring we have returned, hearts fluttering in anticipation, to climb the majestic staircase and face the regal (the kids would no doubt say scary and daunting) grand piano.

My final six students came out with their families in tow, including parents, siblings, and three sets of faithful grandparents. What I wasn't prepared for were the dozens of others, students and families from over the years, who also came to share in the evening.

SO MANY unexpected joys - reunions, hugs, presentations, gifts, reminiscences, former students offering to play and sing - and SO MUCH GRATITUDE for the good and loving (and sometimes goofy) folks I've had the pleasure of working with over the years. My heart is full to bursting.

So which tarot deck? My newest one, as I set out on my newest path - that of a retired teacher. For sixty-two years I've either been in school, married to a school teacher, back in school, or teaching in school or at home. My year has always run from September through June, then there's the summer, then there's September again. That's how it works for me. Until now.
This is going to take a while to sink in.

Here's the card the Everyday Witch Tarot offered up ~ the Page of Cups ~ how perfect! Yes, I am going back to the beginner's mind of a Page, to learn how to handle the new feelings this next phase will bring with it. Yes, back to the drawing board indeed! This will take some practice, and it might get messy! 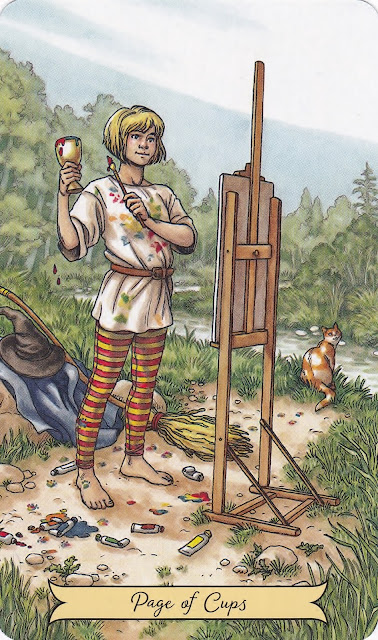 Here's what I chose for myself ~ The Fool ~ I might get myself some of these cool witchy leggings, now that I'm officially an old crone and don't have to dress responsibly! 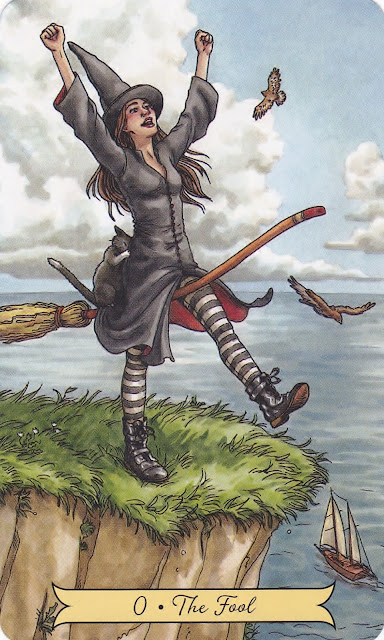 The two butted together ~ the waters of life flow on from one phase to the next. Yay! says the Fool. 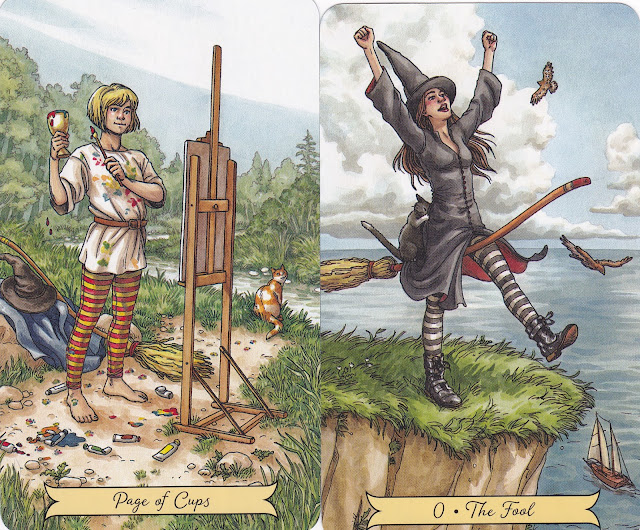 and before you leave, check out door #1 at the top of the page!
(If you want to, that is)

A posse of Nines of Wands, and Door #1

And now, fifteen takes on the Nine of Wands.


We have these that are standing guard. Are they asking us to exercise caution because danger lies ahead, or are we within while they protect us? Are they keeping us out, or keeping us in? Good question!


Here are some that look ready in case a fight is heading their way, but they're not entirely sure in which direction the danger might lie. Is the threat from without, or is the fracas an internal one?

The last batch is a mixed bag.

In the first two, there are fun and games on one side of the story, and real danger on the other.
If you're the Stone Giants, hurling humongous boulders is a blast! But earthlings below - beware of the fallout!

The Twelve Dancing Princesses think it's a lark outwitting their guards and slipping out every night to dance their shoes to tatters. But the prospective suitors stand to lose their heads (literally) if they can't figure out the princesses' secret. In the wily old soldier they meet their match, and so does the eldest of the sisters when he claims her as his bride!


All that Fire! Will it burn or illuminate, or maybe both?


And finally - holy cats! The threat to your cheese (and your rolled up contract) is real, and furry, and underfoot! Do you save the scroll and sacrifice the food, or guard the cheese and give up the paperwork?


I subscribe to this author's newsletter. His mum is a friend of mine, and while he doesn't live in my neighbourhood (or province, or time zone), he did grow up in a town nearby.
If you scroll down past the picture of his wife hugging a rain barrel, past the New York Times mini-crossword (short & sweet, I recommend it) you'll get to a section labelled STORY.
In the story there's a cello teacher referred to only as Mr. W______. I'm reading away and realize that I know the mysterious Mr. W______! I taught all six of his kids! So you could say that I almost made it into the newsletter too, right???

Realizing this (duh! it's not like it happened all of a sudden) brings:
1) sadness that there's not nearly enough time left to try everything and to fix things I've screwed up
2) a refreshing influx of who-the-hell-cares  what I say,   how I look,  what I do.

And that's where should versus love comes in.


This weekend?
Well, I should go to a pot-luck dinner-dance where I'll have a fine time once I'm there. But would I love to go? No.

I'd love to go to Art in the Park where I'd ride the complimentary orange school bus with the windows open, get my hand stamped at the low-tech admission booth, replenish my mango tea supply, see scads of handmade art objects and probably buy one that doesn't fit into any kind of budget of mine no matter how I slice it*, hear some local bands (do they actually have to be that loud?), eat an assortment of free samples like raspberry shortbread, five kinds of hummus, at least nine varieties of wine&fruit jellies spooned onto little crackers (and one beer jelly - interesting), washed down by lemonade, buy a hot dog, (much too full after all those samples) and meander over the squashed grass with all the other visitors.
Then I'd love to ride the bus back, pick up my daughter and grandkids, flash my sweat-smeared admission stamp at the gate, and do it all over again 5-year-old style (with some 18-month-old sand play thrown in... 😎).


And that's exactly what I did. Hurray for love!

In neighbourhood news
A local raccoon has decided that my backyard is his outhouse. Raccoon poop is slippery. 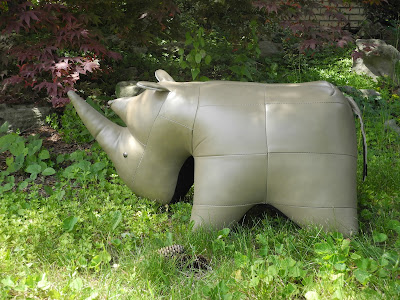