Uninspired and mooching, plus lobsters

This week I just don't have it in me to make up a real blog post. Or to...

But just because I'm lying down on the job doesn't mean that others are.


Here are some hard-working tarot sites with video deck reviews, trimming decks, stuff like that.


Thinking of making a living at tarot?


Looking for a list, reviews, what's new, a few pics, of THOUSANDS of decks?


Well, that's it for this week. Whew, that was exhausting... Time for some refreshment!


I'm off to fine-tune my packing list for Readers Studio 2017, coming up this Wednesday. See ya!

Changing thoughts on Good Friday, and the Bohemian Gothic

I appreciated the day off from school, and sort of liked the ancient story read in a warm church with the smells of spring floating in through open windows. It was completely different from any other church experience (and I had a lot of them, growing up Catholic and attending an all-girls' convent school). Here's the grotto at St. Mary's Academy, my alma mater. Note the uniforms and beanies on our heads. The nuns never let us climb around and explore in there, citing the danger of the rocks collapsing, which I never believed for a minute. So we had to sneak in when they weren't looking (which wasn't often). 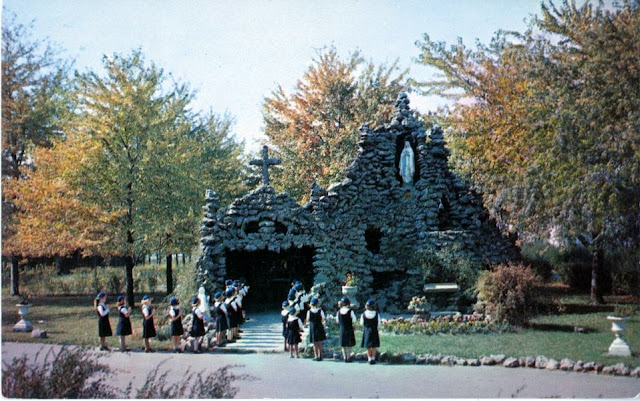 Our block growing up was fully WASP (there is nothing intrinsically derogatory about White Anglo-Saxon Protestant and yet it feels like a put-down, which I don't mean it to be) except for the Tannenbaums, us, and another Catholic family who didn't seem to spend much time at Mass. I remember feeling so religiously superior to be going to church on that weekday. Although, now that I think of it, that was probably a cover for being mad that I couldn't stay home and skip rope with my unenlightened Protestant friends.

Through the choir years:
The this-one-is-unique feeling persisted.

So even as my connection to the actual religious content steadily declined and eventually disappeared, the day itself still resonated powerfully.

This past Friday, April 14:
First of all, it's not really my choir anymore. Since I retired from it a few years ago, their long-time director resigned and they've hired a new person, who is a great guy - personable, welcoming, fine musician. But as always happens with a changing of the guard, some choir members leave, and other ones affiliated with the new director arrive. So at least 1/2 the choir is now unknown to me. It doesn't feel like 'home' anymore.
Secondly, and much more important, that very long gospel of the Passion of Jesus Christ changed for me. As we stood and listened to the roles being read out, and yelled our choir lines playing 'the crowd', I was struck, not by the familiar-ness of the story from that long-ago day, but by the hate and gratuitous violence. It sounded like a newscast I would switch off, a movie I'd avoid like the plague, or a Facebook post I would delete because it offended me.

So, what to take away from that?
It's a story that is still being re-enacted, alas, all over the world. And it was difficult to listen to.

How much does organized religion have to answer for, as regards persecution across the globe?
Probably a lot.

Because I recoiled from it last Friday, does that mean that I'm done forever with singing on Good Friday?
I hope not. The music is haunting and beautiful.

Have I lost the 'this day is special' feeling I've enjoyed for decades?
I don't know the answer yet. It's too fresh.

How to tie this to tarot?
I'm not sure. I guess I'll go to the decks that are out for this Spring, and choose one of them to respond to my feelings about last Friday's gospel.

Which deck?
The one that rushes into my mind is the Bohemian Gothic, because of its darkness. The events of that first Good Friday (why on earth is it called 'good'?) and similar current events surely come from the dark side of our nature.

A spread? A single card?
Since this change of feeling about Good Friday was sudden, and jumped out at me, I decided to shuffle until two cards jumped out. (How interesting - 2 cards, both Majors. I'm glad the cards acknowledge that this feels big to me.)
Thoughts: 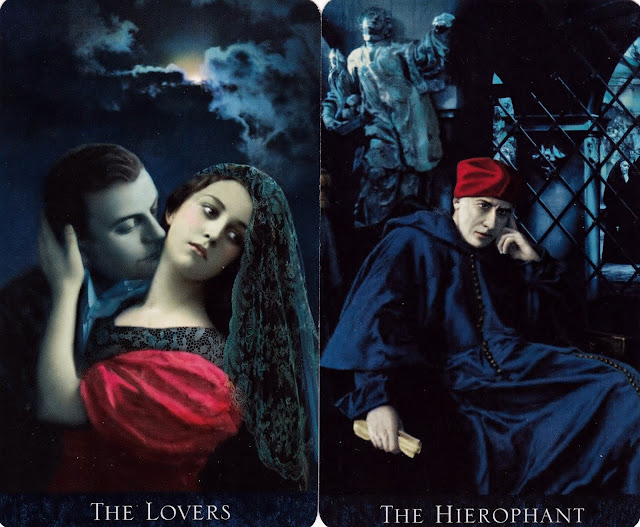 1. Processing this sadness  The Lovers 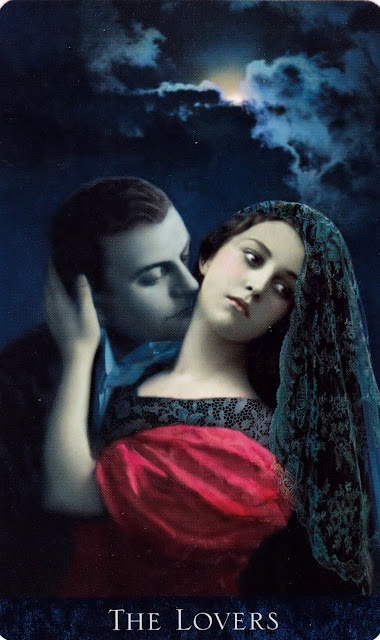 Let go of the past if it no longer serves, even if that idea brings sadness.

What ties you to the past is not necessarily healthy, even though your heart feels great love for it.

What is it you love about that idea? Sort out the harm from the good, and keep what is wholesome.

The past still loves you and wants to hold you. What will you do about that?

(It's interesting that this young woman is wearing a mantilla on her head, which is what we sometimes had to drape over ourselves if we forgot to wear a hat or our funny little green school beanies. Women covering their heads was a requirement in the Catholic church, in the dinosaur years when I was growing up.) 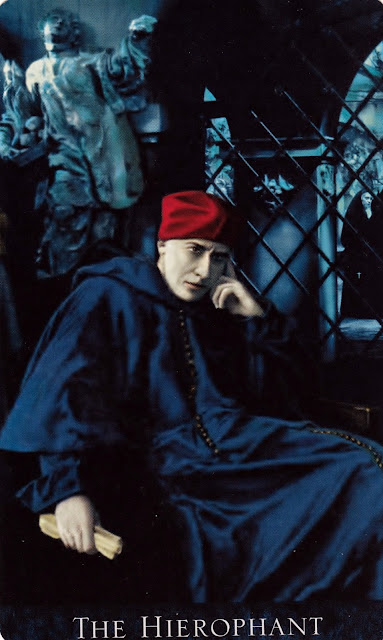 By all means, feel free to frown. This is hard work.

What is in his hand? Is it something he's now questioning or rejecting? Could be...

There's a figure in the background from an earlier time. Research? Comparative religious thought?

His robe has dozens of buttons on it. He's all buttoned up, and could use some loosening of the restrictions he's placed upon himself.

There's a window on the world outside. Does what he believes to be true need a fresh look vis-à-vis the real world? Do his beliefs need updating?

He struggles alone with his thoughts. Could he use some help? Trusted friends? A mentor? A study group?

As usually happens when one captures thoughts or concerns on paper (or screen), some clarity begins to take shape. Thank you, keyboard!

There is hope that Baba Studios is thinking about re-issuing this deck. Perhaps they've grown tired of listening to fans sobbing and begging and pleading. There's even a sign-up if you're interested link.

I am indeed one of the fortunate ones! In 2011 a kind friend bought me the original (2006, hard-to-find) deck and book set, (which never leaves the house!) and I also have the 2012 deck and mini. I haven't yet chosen the decks that will go to Readers Studio in New York at the end of this month, but I'm sorely tempted to take the mini Victorian Romantic. (But what if I drop a burger on it? What if I lose it? What if it falls in my wine? What if someone nicks it? What if...?)

At last, there's talk of you being re-issued, Victorian Romantic! How does it feel?
The World
I'm jumping for joy, as you might imagine! All 78 of us are thrilled at the thought of being once more tossed out into the world and put to use with a whole new group of friends. The tarot world is growing with each passing year, and we're excited about putting our whole Victorian World into your hands. 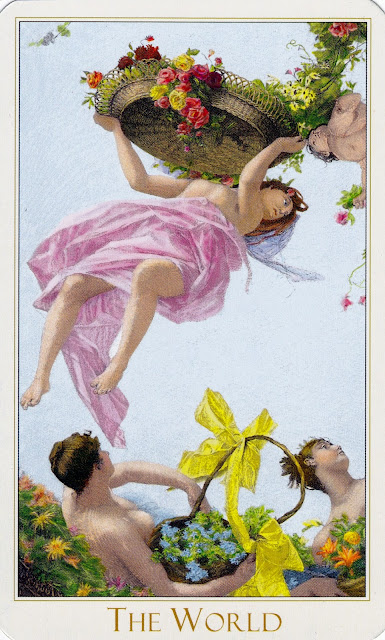 Are you an accurate depiction of the art of the 19th century?
The High Priestess
Yes, even the boobs. We Victorians are strait-laced in many ways, but in our art we burst out of our corsets and are beautiful and free! Our designers, Karen and Alex, are crazy about research, so you can imagine the piles and stacks of old art books they bought, begged, and borrowed while making us a reality. (And don't forget - Queen Victoria, after whom our age is named, really enjoyed being in bed with her beloved Prince Albert. She even wrote about that in her journals.) 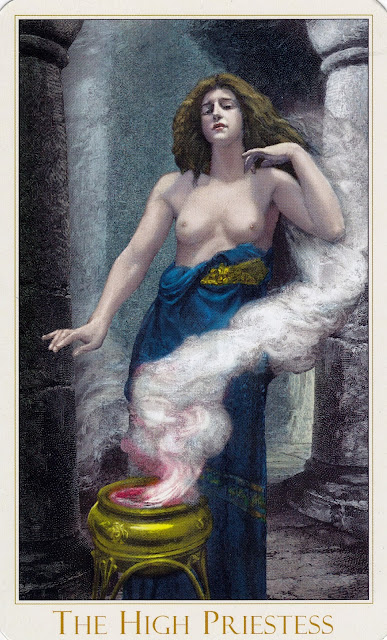 I don't care a whit about history. Are you a good reading deck? That's what I want to know!
Four of Wands
We want you to have a good time with us, so YES! We're full of stories and scenarios offering rich fodder for your imagination. And we're mostly Rider-Waite-Smith-based, for easy learning and adapting. Not to toot my own horn or bang my own drum, but...we rock! 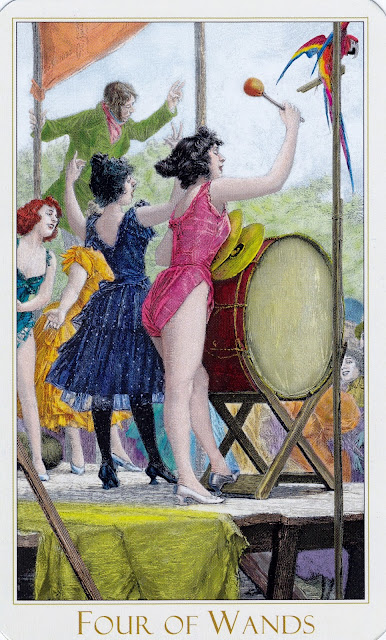 Now we have a question for you, Teawoman!
Pick out one of your favourite cards and tell us why you like it, please.
OK! The Six of Cups
I love the artwork, the colours, the composition. Love the parents almost-but-not-quite in the picture, giving the kids freedom to interact under the radar. I love the idea (this is completely coloured by the news we're subjected to these days) that younger generations are learning about and accepting each other. 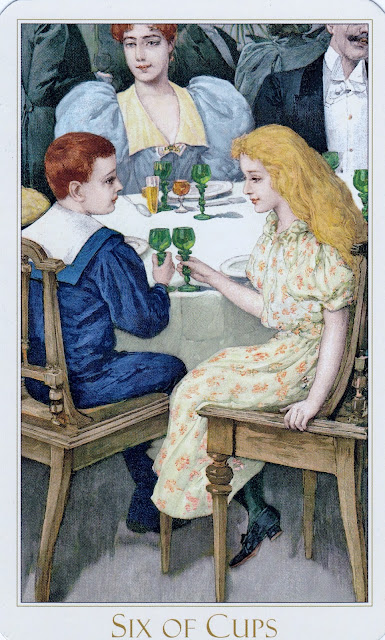 We're waiting for you, Victorian Romantic!

Queen Victoria and Sally Naldrett: different yet the same

This past week, Facebook was full of people finding page 56 in the nearest book, locating the 5th sentence, and posting it. Perhaps this Facebook mania is connected to national book week? Or Canada Reads, also running this past week? Anyway, life lusciously revolving around books! 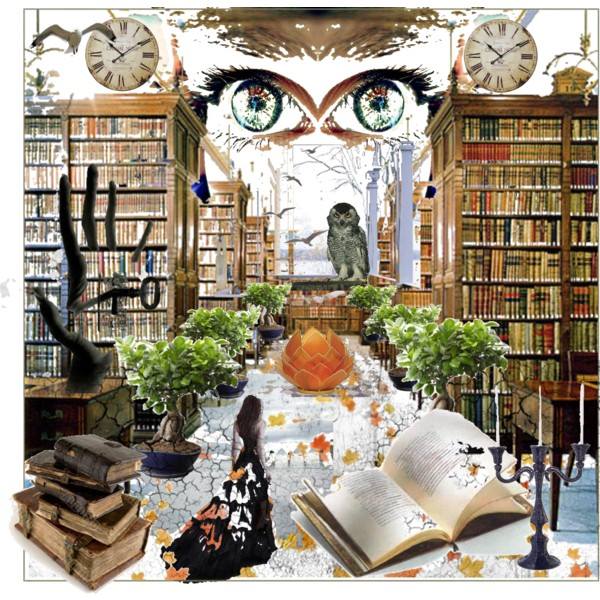 I love the idea of grabbing a book and turning to page 56, then counting down to sentence five. So I decided to put it to use, for my own selfish purposes.
(My impulse was to write: 'evilly twirls moustache', in the style of nya-ha-ha bad-guy cartoons, but as I age, that whole moustache thing seems like it might end up an actual possibility, so...not writing that!)
Back to putting it to use. A current research project, this blog, and tarot. A three-fer.


The Victoria Project is something I'm playing around with for my own amusement. I'm looking into anything (science, medicine, literature, art, music, inventions, politics, etc.) that took place in the lifespan of Queen Victoria (1819-1901).
Two books I'm reading  now are:
Queen Victoria's Secrets (not the underwear company)
Mistress of Nothing
So I paged to 56 in each of them and found the fifth sentence.

Two women perch at opposite ends of the power and money spectrum: Sally Naldrett as "Mistress of Nothing", and Queen Victoria, mistress of practically everything.
Thoughts on the subject, courtesy of the Page of Cups. 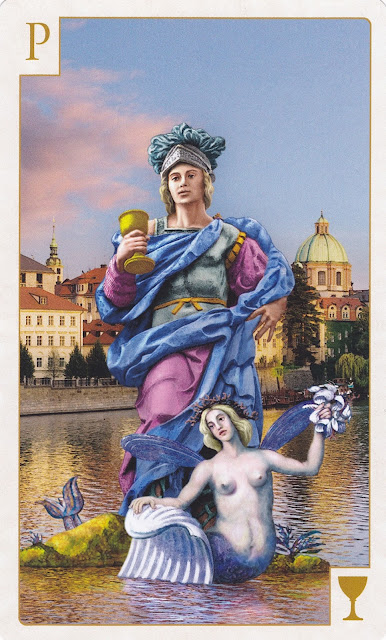 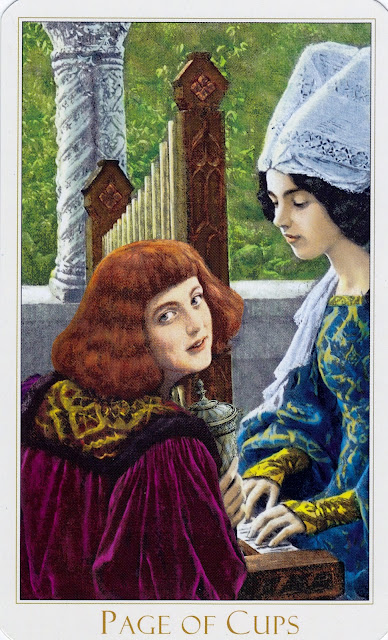 Victoria had to be forever mindful of carefully treading a judicious central path, so as not to fall into the political quagmire to the right and left of her position. She may have been mistress of everything, but she wasn't free to do as she pleased.

From Mistress of Nothing, page 56:
"My lady will do as she sees fit."

Sally's lot was to please her mistress, no matter what the demands might be, and attempt to achieve some semblance of individuality and contentment within that narrow framework.

These two women never met (I can say that with 99.99% certainty) and even if they had, it's unlikely that either of them would have entertained for a nano-second the idea that their lives were similar in any way. However...
Victoria ascended the throne as a sheltered eighteen-year-old. Obviously going to be a steep learning curve there.
Sally's mistress decided to recover from her illness in hot dry Egypt, and she hauled Sally with her. Not much in Sally's upstairs-downstairs-one-day-off-a-month foggy London life had prepared her for this.

They were both fledglings in their new lives.
Raven's Prophecy Tarot 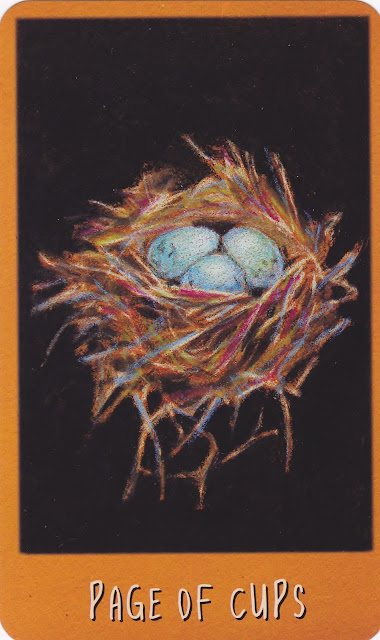 Each of them undoubtedly had doubts. What on earth am I doing here? I don't know how to do this.
Bohemian Gothic Tarot 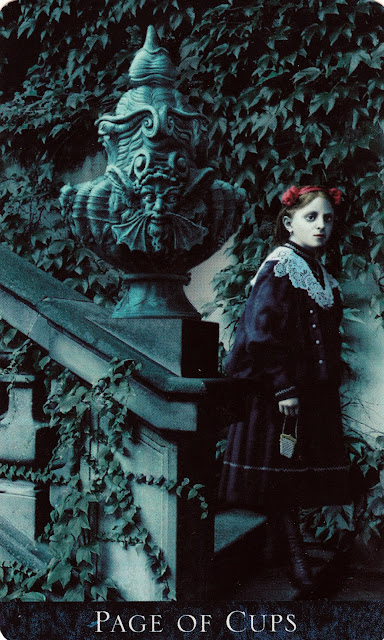 Both lived on a life-blood river, Thames or Nile.
Tarot of Paris 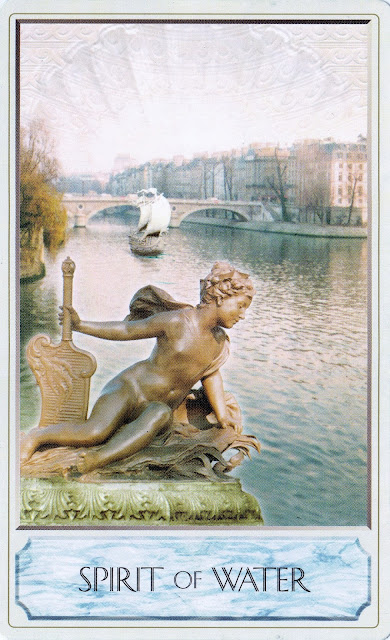 Each lived in a world of letters incoming and outgoing, notes and packages from emissaries and travellers. Victoria's journals ran to 143,000 pages by the time she died. Except for letters to her sister, most of Sally's writing was on behalf of her mistress. Pen and ink were indelibly inscribed on their days.
Alice Tarot 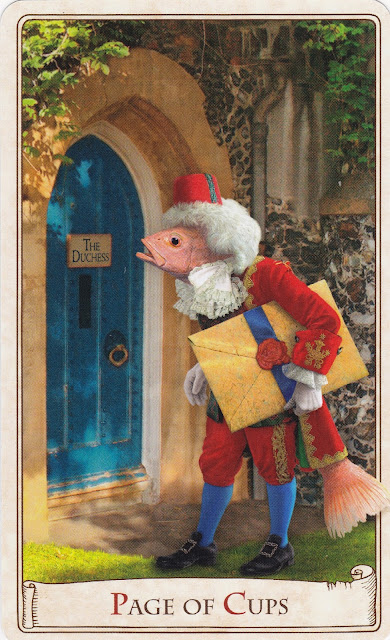 On the other hand, Sally had to cook
Cook's Tarot 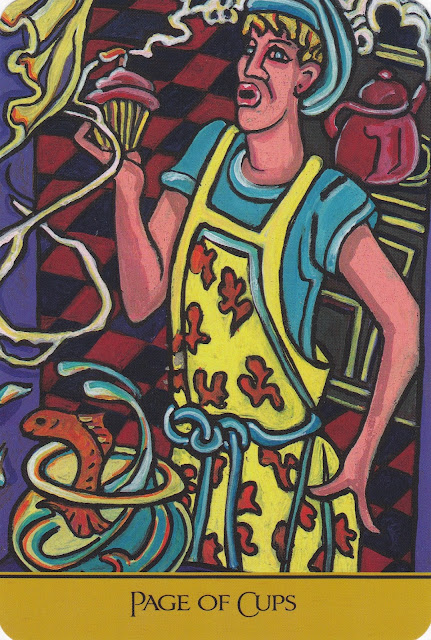 and mess about with menial household tasks,
Fantastic Menagerie 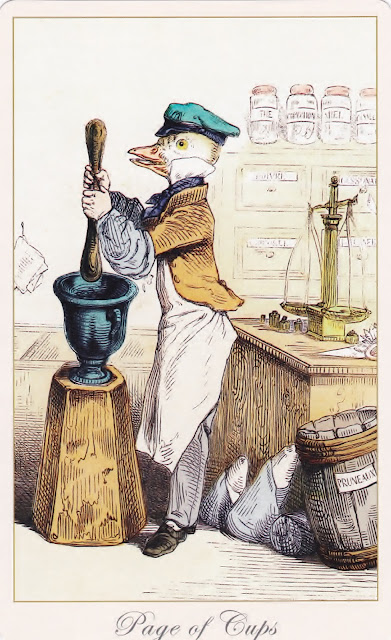 and Victoria never set sail for Egypt.
The Fairytale Tarot 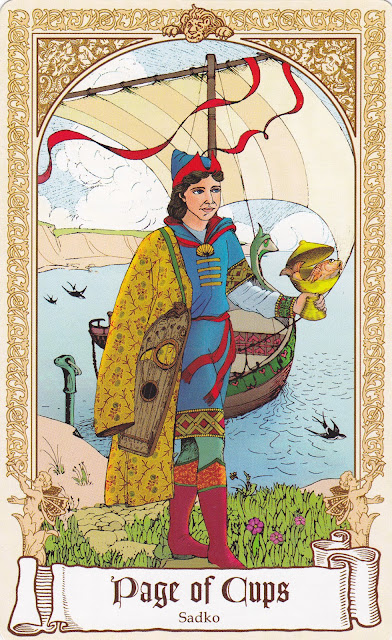 But one thing's for sure - they both had gumption!
Tarot Illuminati 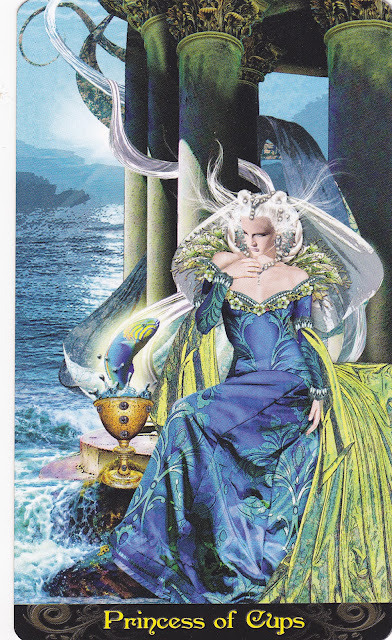