No clue what to write about this week

Nothing seems interesting. Don't want to bore you with more calligraphy stuff. I'm reading about Sherlock but don't know nearly enough to tackle his deck. Don't feel like reviewing any of my other decks. Everything feels stale. Been there, done that. I hate it when my brain is lazy and bored.
I hear the voice of Julie Andrews speaking to me as Nanny from Eloise at the Plaza:


"Eloise, being bored is not allowed." 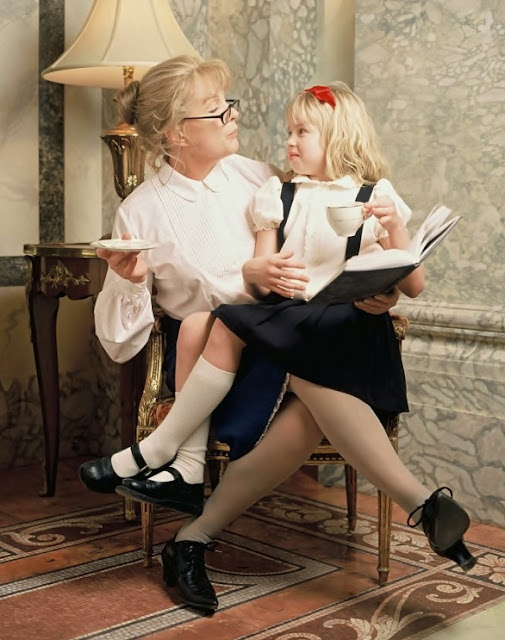 I may not have any fresh ideas, but there are 21 decks sitting on the table behind me who probably do. Let's see who comes up to bail me out. The Magician! Who says there no such thing as magic?

Of the 21 Magicians, 9 are pretty much what you'd expect from this card, 2 look a bit nasty so I shoved them to one side. The other ten bring me new thoughts about the Magician, and that's what I'm looking for.

But first, a coincidence.
The Shakespeare Oracle shows the Bard himself in this take on the Magician. (I love pondering it, and am leaving you free to do the same without thought-interference from me.)
What showed up on today's poem of the day? 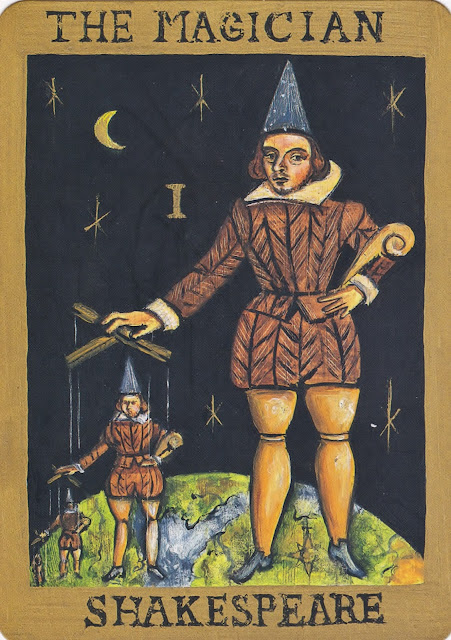 Shakespeare! Here's a clip from Sonnet 116. Good advice for our tempestuous times.

Love is not love
Which alters when it alteration finds,
Or bends with the remover to remove.
O no, it is an ever-fixèd mark
That looks on tempests and is never shaken;

I think Nanny Julie sent this card. How on EARTH could anyone be bored when surrounded by such a feast for the mind, the eye, and all the senses?
Image: World Spirit Tarot 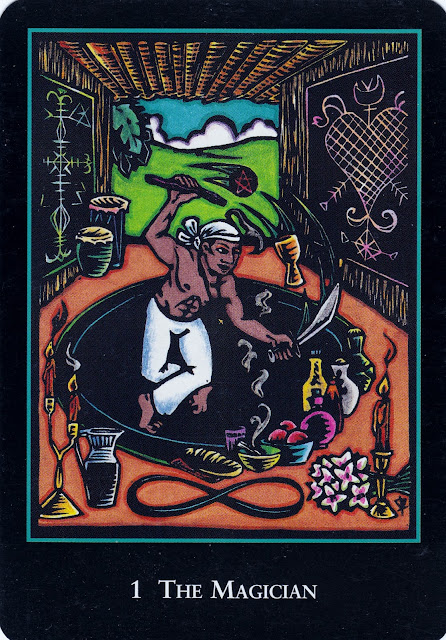 It's true, Shakespearian Tarot. I am working on an absorbing new project. 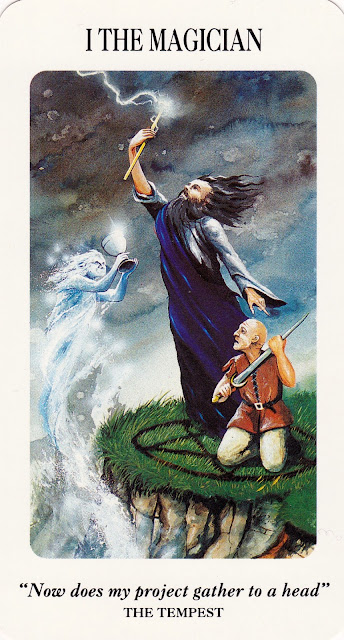 You're right, Margarete Petersen, the winds of change are blowing through my life as I near retirement in June. New opportunities blowing my way - yup, that's magic! 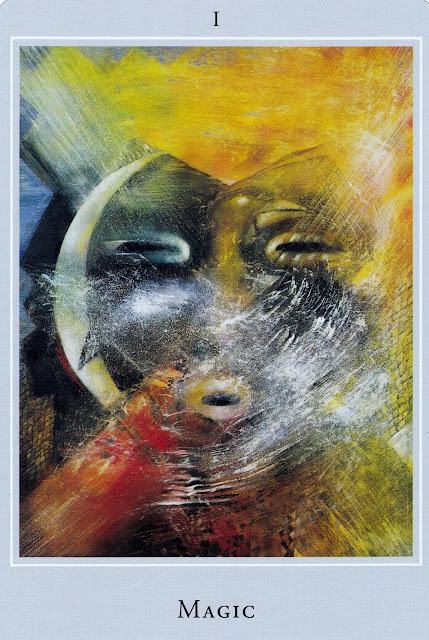 Ravens! How I love them and their incredible smarts! They've been showing up regularly here. I learned about their cleverness in Bird Brains by Candace Savage. (She also wrote Witch: the Wild Ride from Wicked to Wicca.)
Image: Chrysalis Tarot (cropped) 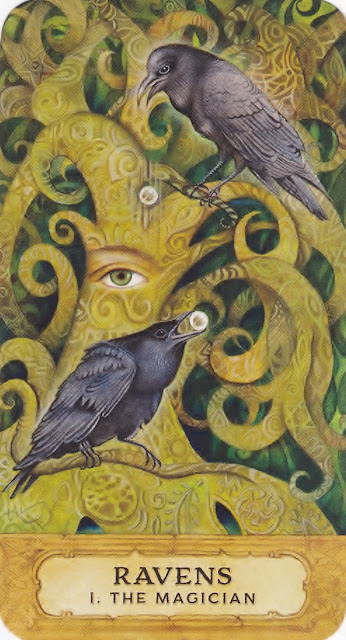 We live in a magical world, that's for sure. Wonders abound. I hope we realize it in time.
Image: Golden Tarot 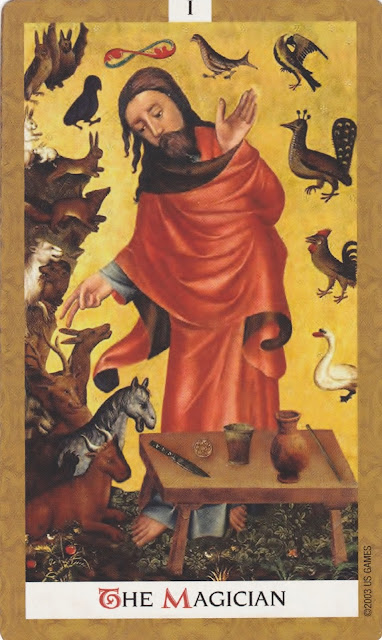 Let there be light! Slanting sunlight and flashing firelight. This week I looked up an overnight VIA rail route that travels from Winnipeg, Manitoba to Churchill in the far north, where the Aurora Borealis lives. It's on my bucket list, that train trip.
Images: Vikings Tarot, Universal Fantasy Tarot 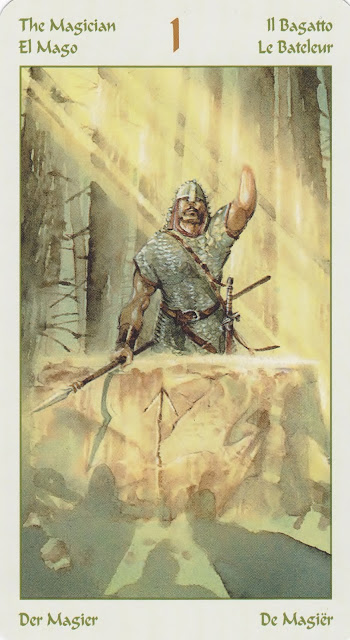 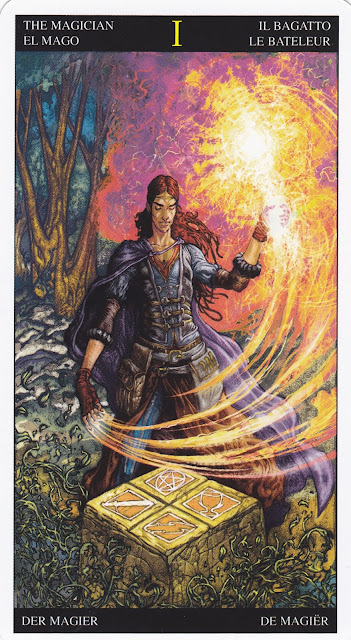 Every single week this deck puts out a gorgeous atmospheric picture based on the stories of the Thousand and One Nights. It's a Lo Scarabeo deck, with the usual skimpy (dare I say almost useless) LWB. How I wish I knew more! Oh...I get it. Time to find a copy of the book and study up? Well, you'll have to wait your turn, Thousand and One Nights. I'm currently working on the stories of Sherlock Holmes so I can read that deck! 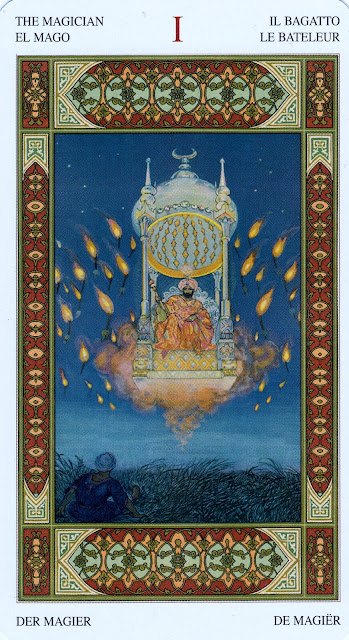 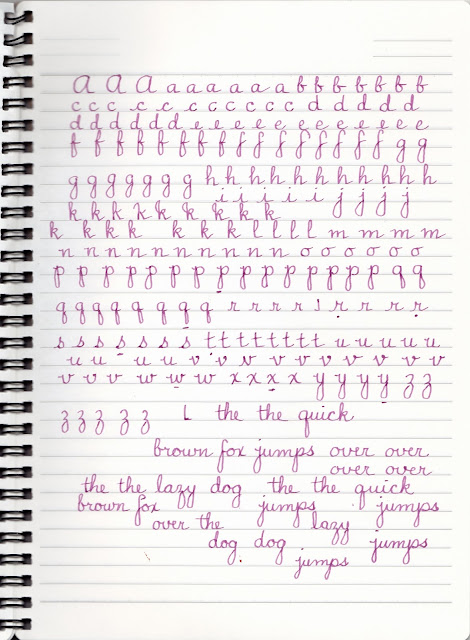 Sherlock, the character and the deck

One of TABI's free-readers has been posting recently of her work with John Matthews' and Wil Kinghan's The Sherlock Holmes Tarot, and her work is so literarily beautiful and evocative that I'm all stirred up about this body of work that belongs to Sherlock. The 'canon', as she calls it. And about this deck, which I purchased when it first came out in 2014 but haven't used because I felt inadequately informed, Sherlock-wise.


A call to my local used-book store produced a GIGANTIC 2-volume set of the complete works about Sherlock with annotations and maps and pictures and what-not, more than I can ever absorb in five lifetimes. Must admit that I'm excited about delving into it, even if I'll never be an expert!


So this is not an article about or review of this deck - not yet. I haven't a clue (ha! unintended) about it, and am not about to insult it or massacre its meanings until I've better acquainted myself with Sherlock and his stories.


What I would like to do today is use this week's cards to offer their opinions on how I'll fare with the Sherlock Holmes Tarot.

So many literary destinations on offer, so many delicious stories and characters. Just where I am at the moment, poised at the taking-off point with Sherlock and John Watson. Each path and story has its own particular charm and appeal.


Here's a similar-looking design from the Minoan Tarot. Choose one of the paths, grab hold of the little suckers so you don't fall off, follow it through to the end. Then repeat, using a different leg! 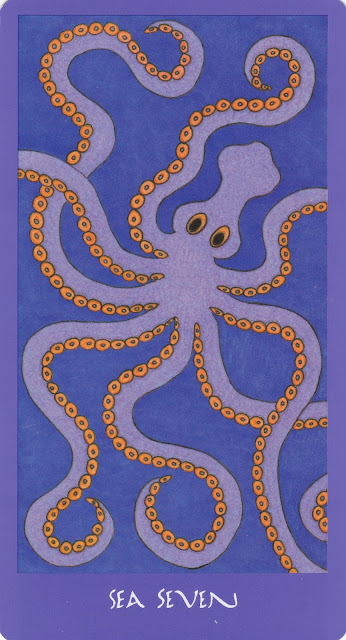 'Yes, the task may appear daunting at first!' says the Universal Fantasy Tarot. 'No, the books you've purchased only seem to be this big.' 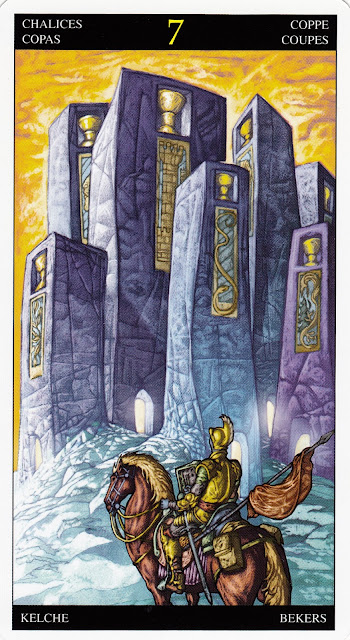 It's true, everything may initially seem a bit fuzzy. You'll find your focus. Margarete Petersen Tarot 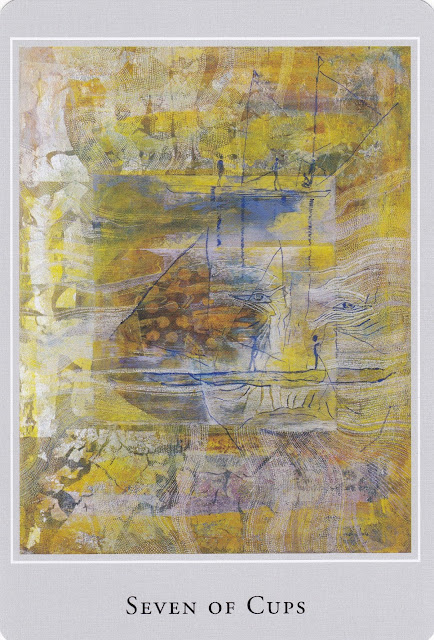 Just choose a story, start reading, and it will slowly become clear. The Elora Tarot 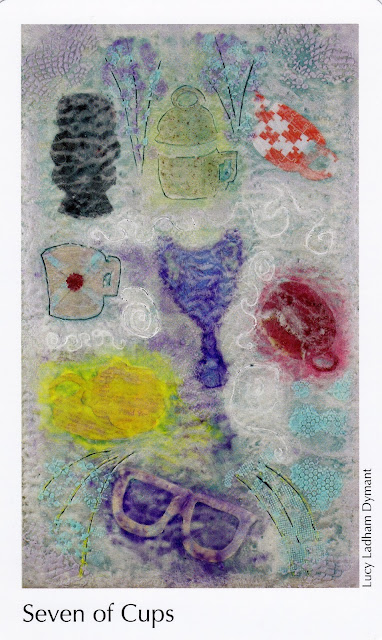 If the Lady of Shalott is too distracted by all the mirrors and illusions around her, she'll never weave any yarns across the warp threads of her tapestry, and she'll make no progress whatsoever. Chrysalis Tarot


One final piece of advice from the Haindl Tarot. Have no illusions about this. Success can only come from attempting, not merely dreaming about it. 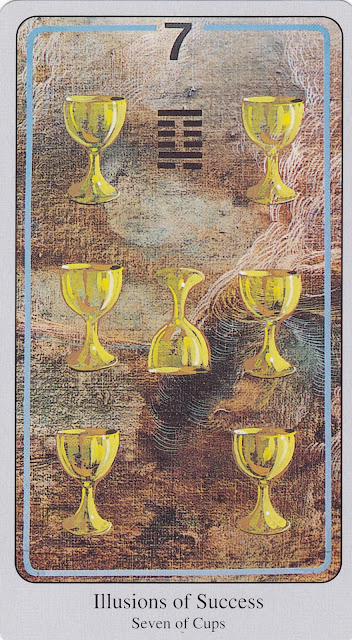 And now, hailing a hansom cab to 221B Baker Street!

Downsizing, writing by hand, and of course the cards! 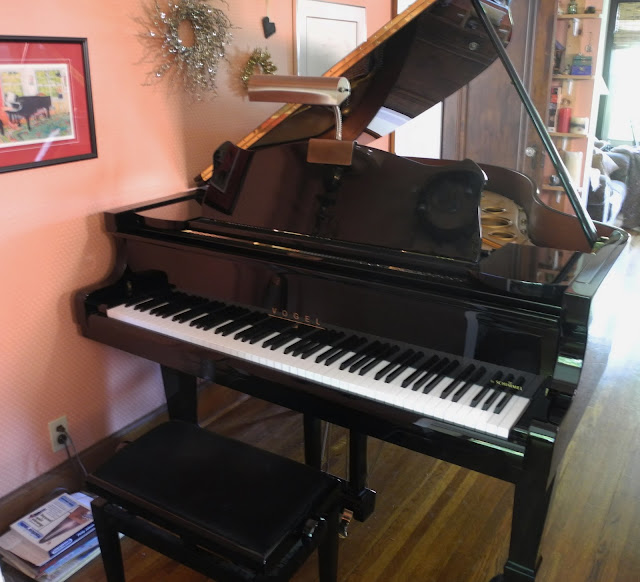 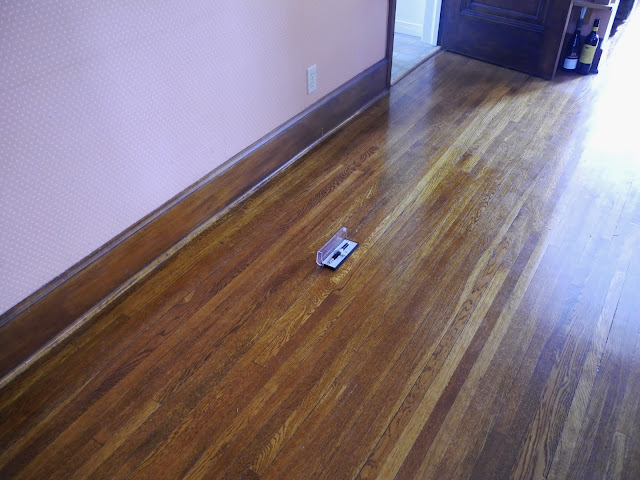 Next: writing by hand (a nod to International Correspondence Writing Month, or InCoWriMo). 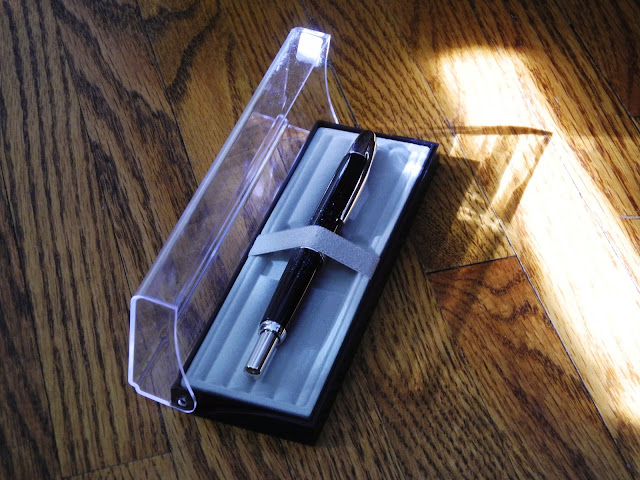 And now, the cards!

All three of these cards were chosen simply because I like looking at them. They come from the latest batch of twenty-one Fours of Swords, or Air, or Sky. The suit of the mind. The number of staying still. 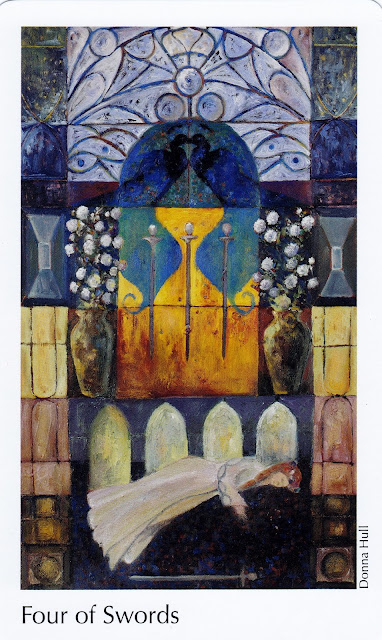 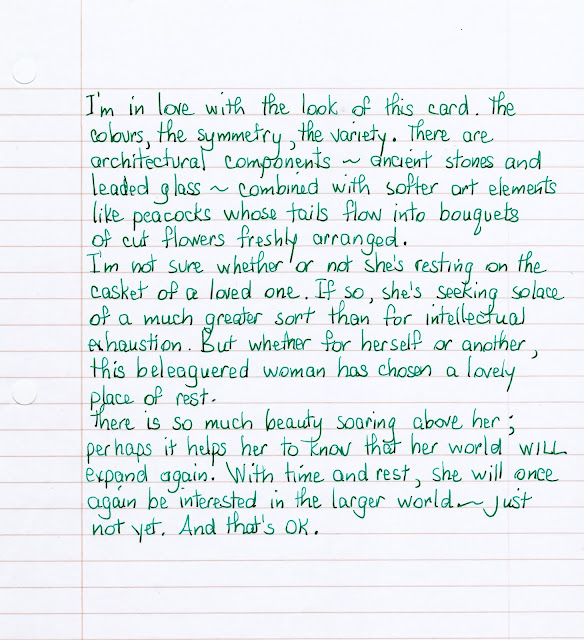 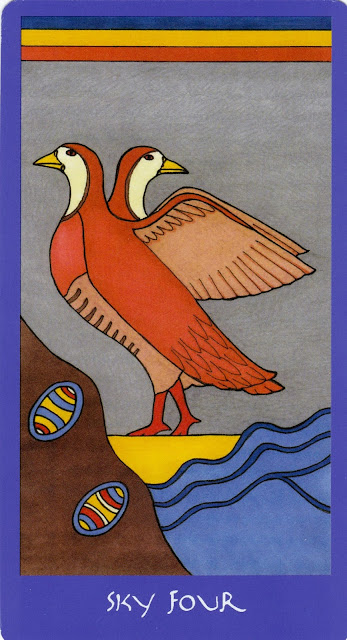 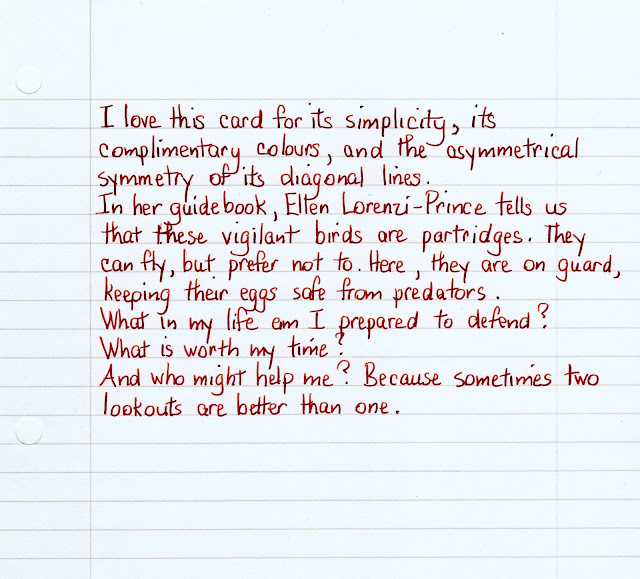 Every morning, a one-minute video lands in my inbox from nature365. There are often wolves, so my attention was drawn to this card.
Modern Spellcaster's Tarot 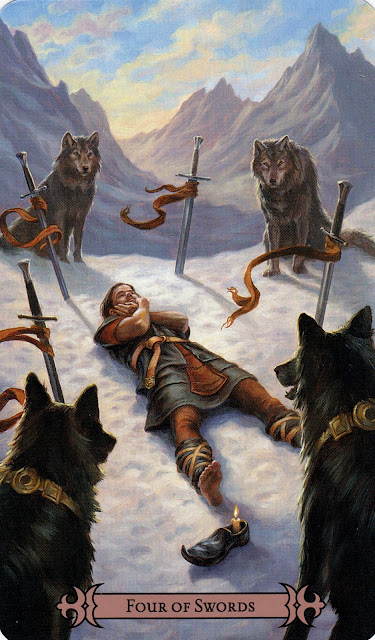 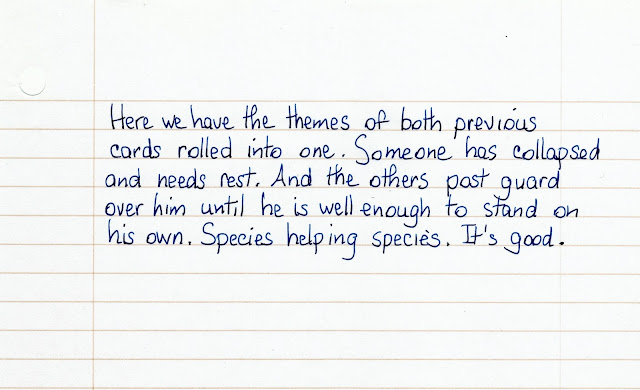