What I've learned from working with 23 decks at once...and an old family recipe

Twenty-three images in one go is a lot to take in. Once I got the hang of grouping them by their similarities, rather than looking at a random assortment of cards, picking out the few that stood out for their uniqueness was easy. My favourites were almost never the usual expected images, but those that came at the thought from another angle. The oh my god that's a gorgeous idea! ones, or the what the heck? ones which sent me scrambling for their companion books.

There were surprises.
Because I have so many decks, I don't know them all, and have formed some half-baked opinions about the usefulness of many of them. In general I learned that some I didn't expect to like, I did. And vice-versa. For instance:
1) Some decks which I'd judged as lightweights thought-wise were the most evocative: Badgers Forest in particular.
2)  A few whose artwork I'd dismissed as too pale or too tiny were consistent favourites: notably the Celtic Dragon. (The colours appear to have been punched up a bit in this link.)
3) I expected some to grow on me as the weeks went by. They had nice art, but didn't speak to me. The Tarot of Trees is one example. Perhaps this is a deck that needs to be alone when one is working with it.

On Winter Solstice December 21, I put away these 23 decks and chose a new group of 21. More about them in later posts.

This recipe is thrown in as a reward for reading about what I've learned, because really, who except me cares? So thank you! 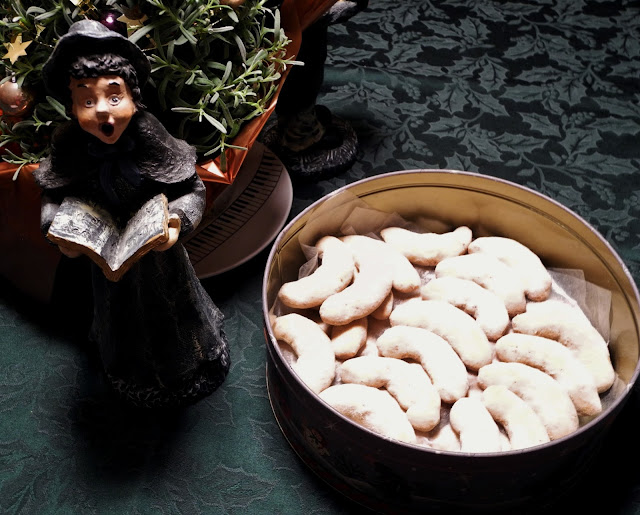 When my German Grandmother made these crescent-shaped almond cookies every Christmas, she weighed everything out in decagrams on her old scale. Which didn't help me one bit. So I went over to watch her bake, a long long time ago, and remeasured the flour, almonds, and sugar with my Canadian cups and half-cups.
Another difference between Gram's long-ago method and mine is that I've not the patience to put the almonds through the hopper of a rickety nut-grinder to get the light fluffy consistency of hers (even though I have her old grinder, the kind that clamps onto the kitchen table).

In processor:
1 1/2 cups raw almonds
3/4 cup sugar
Run until there aren't any big chunks of almonds. (The sugar stops them from turning into nut butter.)

In mixer: (Gram did this by hand.)
1 pound (2 cups) unsalted butter at room temp (salted just won't do)
the almond/sugar mixture
4 1/2 cups flour
1 Tbsp vanilla (I use real)

When it's all mixed together, form the dough into 2 square logs about 2 inches round and wrap in plastic wrap. This just makes it easier to cut off uniform pieces and form into crescents.  You can bake now, or keep in the fridge or a cold basement for a few days. Bring to room temp on baking day.
Slice the logs about 1 inch thick, cut in half, and form into rolls about 2 1/2 inches x 3/4 inch. Bend slightly to make crescents. It's a fairly dry dough, so if you try to bend them too much, they'll crack.

350 F, parchment-lined or ungreased cookie sheets. Baking 2 sheets at a time, rotate the pans and switch oven shelves at 11-12 minutes, bake another 11-12 minutes. They'll be quite brown on the bottom and a bit browned around the edges. After they're rolled in sugar, they'll look a lot whiter.
Let cool on the pans, roll in fruit sugar, store in tins. They keep for ages. (Fruit sugar is just extra-fine plain old sugar. You can make it by buzzing regular sugar in your processor.)

This makes 13 -14 dozen cookies. You can halve the recipe if you want!

The Pages of Wands on Retirement

This is my last year of teaching piano. And it's the last week working with this particular set of 23 decks; on December 21st a new batch come out for Winter.


Last Friday I hosted my final students' Christmas Party. I've been whittling down the numbers in my piano studio for several years now, and the gathering would be a small one. So I issued invitations to some past graduates and their families. Throughout the evening, several groups arrived, gifts in tow, and the most wonderful babble ensued!
Cries of delight and surprise, hugs, catching up, comparing notes on university classes and exams, parents reminiscing on years gone by.


As I watched them all interact, so happy to see each other, a great warmth and thankfulness enveloped me, and is still with me today. I feel incredibly blessed to have had so many beautiful families as a part of my life these many years.

I'm looking at endings - bittersweet - and the card that arrived to speak this week is the Page of Wands. A newbie to the court, who hasn't yet experienced many endings in life. What can s/he share with me, when our life stages are so different?

Quite a lot, as it turns out.

On the one extreme we have the "toughen up, cookie" group.

Change takes guts. There's no backing down. Moving on is not for sissies.


Middle of the road is the "woo-hoo" group.

There are exciting new horizons out there! What an adventure! Think of the new friends you'll meet!


And then there are the sweet ones, looking back with fondness and delight on the good times past.

I shall endeavour to heed all their advices!

Christmas instructions from the Whimsical Tarot

Truth be told, I'd rather be curled up by the tree with its lights aglow, reading The Cricket on the Hearth or When Santa Fell to Earth, or watching a Christmas movie. Or cooking up the filling for a couple of tourtiere. Or digging through boxes of decorations and picking out my favourites. Or slicing into this year's fruitcake (oh, the anticipation!).


But, it's blogging time. And the only deck I own that has a Santa Claus card is the Whimsical Tarot drawn by Mary Hanson-Roberts. Father Christmas appears as card IV, the Emperor. Since Santa arrives on Christmas Eve, then the four preceding cards must have something helpful to say about the days leading up to it, right? That is my rationalization for this abbreviated post!
(Note: my deck has been cropped.) 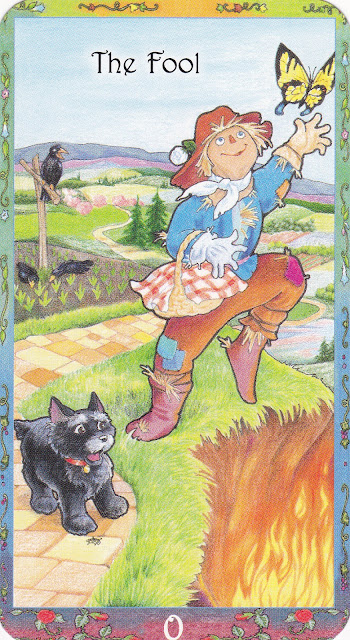 There are baskets to fill
and errands to run,
Nog and cider to swill,
Oh the fun! Oh the fun! 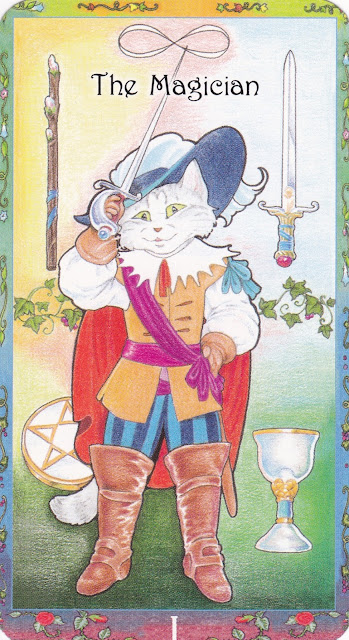 I agree with you ~ Christmas is magical!
Here's what to do:
(start top left, read clockwise)
1. Wands ~ let loose your creative energy.
2. Swords ~ plan well, make lists.
3. Cups ~ take time to enjoy the prep.
4. Pents ~ budget, but not too much! 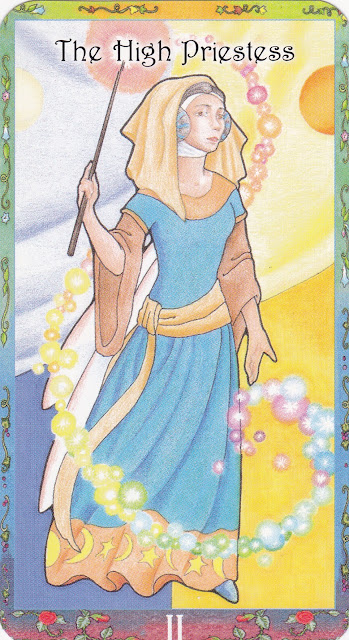 Try not to get carried away.
Be a little sensible about what you can do.
Keep your expectations realistic.
Find some quiet time for your mind.
Christmas is more than a day ~ it bubbles inside you. 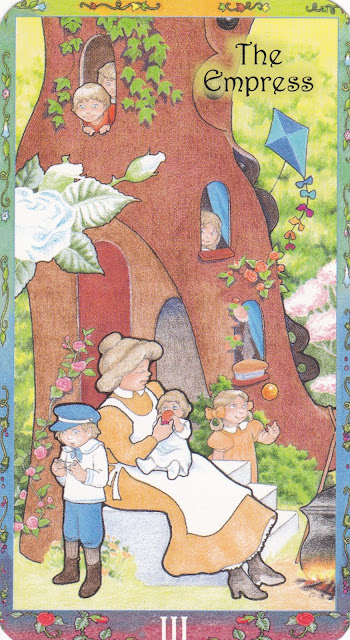 Enjoy the people you have around you.
Some loved ones will be with you, others will not.
Let memories of Christmases past bring you a smile.

When your ideal does not come to fruition, shrug and let it go.
Be thankful for small things; you don't need a Norman Rockwell scene to be blessed! 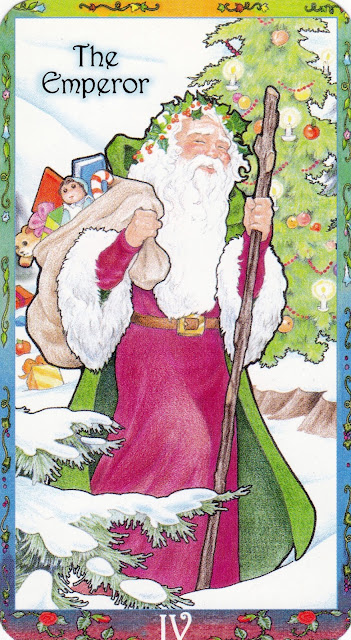 Is Christmas just for kids?
Nope.
Do you believe in Santa Claus?
Yup.
Did you remember to water the tree?
Yes.
Does this card make you smile?
Yes.
Do you know the names of all my reindeer
Only if I sing Rudolph.
Do you remember where you've hidden all the gifts you bought?
Well, maybe not all of them...

I don't know why the title on the box is a mix of upper and lower case letters. SPellCaSterR'S.
My first thought was that the CAPS would spell something, or be an anagram. SPCSRS. Society for the Prevention of Cruelty to Seniors? Somehow, I don't think so.
The lower case letters? ellate. Well, I am sort of elated to be interviewing this deck...


Note: Air and Fire are switched in this deck, which is always discombobulating to me; Swords are Fire, Wands are Air. Looking in the accompanying book by Melanie Marquis unfortunately added to my confusion. Attributes that I would consider part of Air's list were given to Fire, and vice-versa.
Oh dear, that means that I have to address it in my questions for the deck, and I don't want to. But I will, because testing this deck's usability is what this post is about.

Here we go, with the Modern Spellcaster's Tarot.

1. I'm confused. Your book mixes some of the traditional elements of Fire (swiftness, change, movement) in with Air, and includes some of the usual Air ideas (strife, conflict, and fear) with the definition of Fire. How on earth am I to read with these? 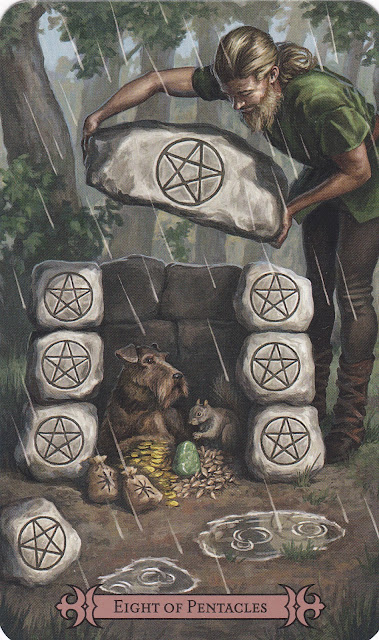 Well, right off the bat, I see that this deck has a sense of humour! I asked 'how on earth?' and up came Earth!
You're correct - two of our elements have been reversed. I think the answer lies in this image, where a shelter has been built one stone at a time. Read one card at a time and try not to worry about the whole deck!
If you draw a Wand or Sword, read what you see there. If you detect a blend of Fire and Air elements in a single card, then incorporate that into your interpretation of that particular card. Take it one card at a time, and remember to breathe!
As you can see, there are diverse creatures and such in the shelter. A dog, a squirrel, a couple of bags, some coins, nuts, a large green stone. All are welcome, as are all types and levels of readers. We are a friendly, easy to read, fully pictorial deck. Let go of your anxiety, and enjoy!

2. I'm not a witch or a spell-caster, and I don't work with magick. Is your deck for me too? 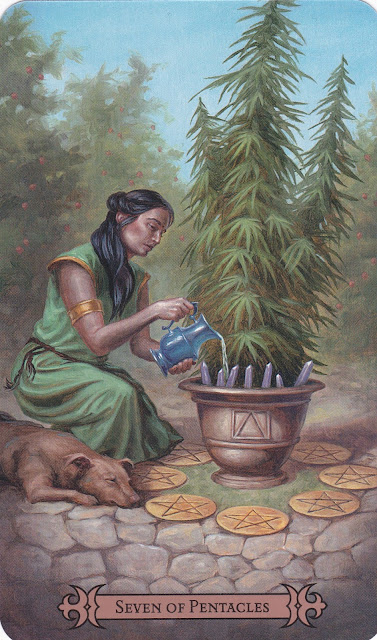 Definitely! Our images are crystal-clear (a small spellcasting joke!). We've sent you another Earth card to emphasize how down-to-earth this deck is. Water, plants, paving stones, pets, taking care - these are all part of a regular life, and not intrinsically magical. If you work with crystals - wonderful! If not...well, the image of crystals will serve your reading in a different way.  Of course this deck is for you! 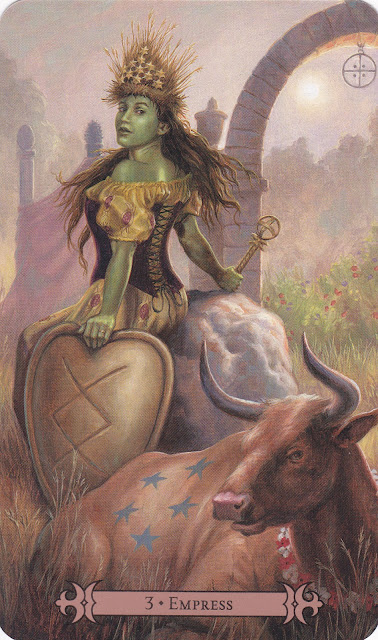 Your tarot friends will be green with envy that you get to work with me! Ha! Now, let's get serious.
You initially asked a question about Wands and Swords (Fire and Air) being switched. And here we are with your final card, another Earth-based one. Not a single Wand or Sword showed up to talk to you. Are they too shy? No. Are they ignoring you? No. Do they consider your question to be silly? No. Did they stay away because they know that the Earth cards can handle it? Yes!
First of all, look at my card. I know you don't know anything about magical symbols, so I'll be straightforward with my answer.
I'm green and sitting on a rock, I have a crown made of hay or some kind of dried grass, my shield is heart-shaped, my bull has stars decorating his stomach, and he wears a necklace of flowers. There are stone archways, and fields of flowers, and a city in the misty distance.
Lots to look at, and think about, right?
Well, that's our deck exactly. Down to earth, with enough to chew on in every card just by looking at the pictures. If you want more, think about the elements and wrestle that around a bit. Magick? Check the book for ideas.

Thank you, Modern Spellcaster Tarot. I have a feeling that we'll have a fertile reading relationship!