More from the tarot vaults...

When this appears, I'll be participating in the quintessential Canadian summer pastime: going to the cottage. In northern Ontario they call them camps, but it's the same thing. Some kind of habitation (snazzy or humble, indoor plumbing or no) by a lake. Summer just isn't summer for me without a serious chunk of lake time! 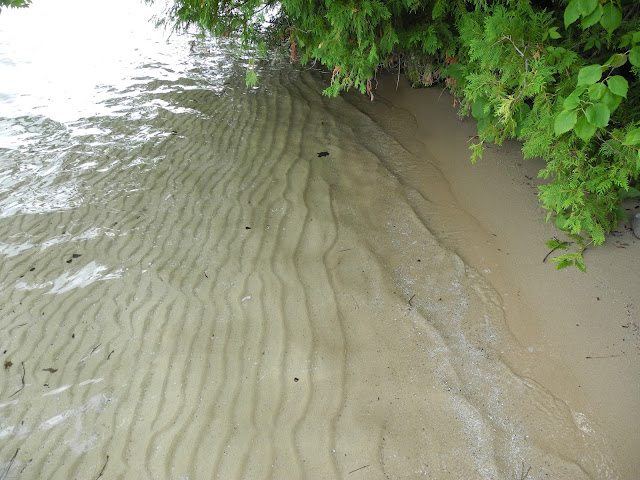 So once again, I'm blog-cheating and hauling stuff out of the basement for when I'm away. Two posts from the summer of 2014.
This one's from June of that year: strawberries and summer

A couple of days ago I was digging around in the depths of the chest freezer downstairs. Stomach folded over the edge, dangling arms foraging through unlabelled piles of who-knows-what. No luck locating what I went down to get, of course, but I did find some strawberry jam. Mmm. The perfume of summer.


And August: a ducky little post about cottaging with a friend. There's something about the gentle splooping sounds of tiny rippley waves nosing into the dock on a still morning at the lake...

I hope you've enjoyed something that is on your essential-for-summer list!

Committing to write 50,000 words (about 200 pages) for last November's Novel Writing Month was exciting, a bit daunting, and novel (ha!). Storytelling using cards as prompts was something I wanted to try. It would be fun! What did I have to lose, other than every single minute of time not allotted to teaching, eating, sleeping?

November 1st: on your mark, get set, go!


What I didn't anticipate was the exhilaration that would bubble up when I solved a sticky plot point. Nor did I realize how much I would learn, researching where my protagonist would go next and why.
The sensation was much like planning an exotic trip: the must see locations, where to stay, which restaurants, how to get from one place to another, flight schedules, performance venues, what was the weather like, the vegetation and wildlife?


The first villain my protagonist ran into was this guy. Before he could decapitate her with his pointy shovels...

this woman swooped to the rescue! She reminds me so much of Serafina Pekkala in Philip Pullman's The Golden Compass. The setting felt Russian-y to me, so...


that's where this kind witch flew our heroine. (Did you know that it's VERY COLD flying on a broom high over the Atlantic?) Near the city of Syktyvkar in Russia is a formation of stone pillars known as the Manpupuner, or Seven Strong Men. The smallest of these giants is 98 feet (30 metres) tall. There Sophie met these two; challenges ensued (of course!).


The second round of cards brought a beautiful cockatoo, so it was off to Australia next, where...

Sophie, our protagonist, is introduced to this desperate, caged, misunderstood creature. With the help of a few new Aussie friends, she devises a way to rescue the she-beast and reintroduce her into the wild, which leads us to...

the small Australian city of Katoomba, where a glass-topped railway car drops its passengers 1000 meters (over half a mile) into the rainforest of the Jamison Valley. A Jurassic rainforest, no less! While in Katoomba, tourists gaze at a rock formation called the Three Sisters, which grow up from the valley floor. 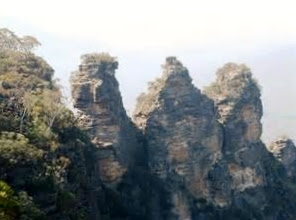 Back in North America, in a fictitious attempt to save a beautiful old Sarasota FL home, I was googling various ideas and learned that the first wave of Chinese immigration into the US came during the gold rush in 1849. And soon after that, during difficult financial times after the Civil War when thousands were competing for low-level jobs just to make ends meet, a giant backlash against Chinese workers swept the US. It was particularly fierce in California. And in 1882, the Chinese Exclusion Act was passed by the US government, putting an end to any immigration from China until it was finally repealed in 1943. I had no idea.


There were many more cards and jigs and jogs in the road between the nasty shovel-man and Sophie's final trek home. By the time November 30 arrived both she and I were relieved to be safely back; it was an exhilarating exhausting roller coaster of a month!
My advice? If someone ever hands you a mysterious stack of cards, pack your bags and prepare to take flight!

After a day spent at the computer, my eyes needed a rest and the rest of me needed to move around.
This was the first comfortable day, heat-wise, that we've had in ages. Time to get out and enjoy it!


I set off on a walk, heading south toward the park at the end of my street. Loud cheers and laughter were coming from a crowd gathered around one of the picnic shelters (the new big one), with more white rental tents clustered nearby. Maybe 150 people of all ages. This was calling for investigation!


A HUGE indestructible-looking pinata was tied onto one end of a rope slung over an oak branch. A tiny girl who looked about 3 years old was steadfastly thwacking away at the big green horse amid shouts of encouragement. She was going to need some help cracking that thing open!
About a dozen round wedding-type tables with white cloths and centerpieces, china and glassware, awaited the guests. Off to the left several women fussed with a massive buffet set up and ready to go. I've never seen anything this fancy in the park. It's usually a jeans and hotdogs kind of place.


I circled over to a balloon-festooned sign strung between two trees on the opposite side of the dining tables.  Happy 25th Anniversary to Oscar and Luisa! it said.


Some women and men near the food area were chatting and didn't appear to be frantically busy, so I asked where the guests of honour were. There was some pointing and shirt-colour naming, and finally one of the women took my arm, said, 'Come!' and escorted me to Oscar. I congratulated him on the beautiful gathering, and headed home in the balmy air and golden setting sun, smiling big.

I've had this deck for a while, even trimmed it, but never really got acquainted with it. It's time!

A few facts before I start grilling the deck.
Most of the Majors carry their usual names, with one or two notable exceptions (see 3. below).
The suits are Fire, Seas, Wind, Earth, and the 'courts' appear as Child, Maiden, Mother, Crone.


1. Each of the Majors has its own goddess, but not so the Minors. Is there a reason for that?
Wind 9 ~ Criticism

(Uh-oh. I'm in for it now.)
Just as our minds conjure up criticisms, so do they build structures (like a tarot deck) and formulate plans. The plan with this Mythical Goddess Tarot is to incorporate many strands: the sacred feminine, mythology, and Earth's seasons and elements. By choosing goddesses for the 22 trumps, then branching out into the many facets of nature, and tying it all together, this deck has a rich, broad focus.

2. I find the key phrases on the Minors a bit off-putting when I'm trying to think about the cards' images and meanings.
The Star XVII ~ Pleiadian Star Goddess

I sense tension in your question, Teawoman. Please breathe! Our cards pour out so much wisdom, and so many slants and perspectives, that you will find it refreshingly simple to work with many possibilities: your intuitive take on the images, the traditional card meanings, the artists' images, and our key phrases featured on the minors. We are here to help ease your way!

3. I like the mix of goddesses from different cultures. Do they work well together?
Sacred Fire XI ~ White Buffalo Calf Woman 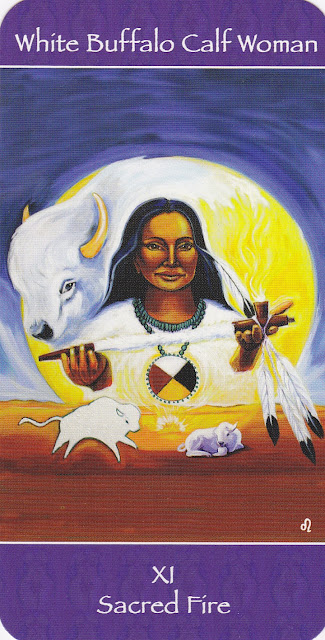 You will find strong goddesses in this pack of cards, each gifting you her power. I am of the first peoples to walk this earth, and I lend my strength to all who come to seek wisdom from this deck. I welcome all, and embrace their beliefs and customs, as they do mine.
(Note: this is the Strength card in this deck.)

4. Is there anything you'd like to mention that I haven't asked you?
Fire 2 ~ Centering 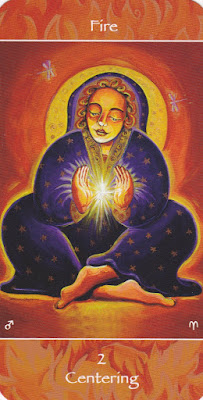 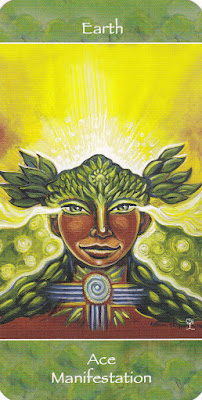 Yes.
Observe the
elements as they
rest, work,
and play.
Enjoy! 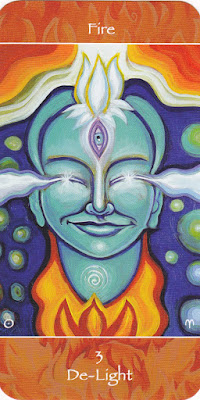