Vestiges of church-going, with The Grail Tarot

I was brought up Catholic, went to an all-girls' convent school, learned Gregorian chant along with arithmetic, and grew up in the company of the Sisters of the Holy Names. Although I've long since ceased being a practising anything as far as organized religion goes, there are parts of the church year that still beat strongly within me.
Good Friday is one of them.

I remember a sunny April, playing skip on the sidewalk with the other kids, my pink hair rollers bouncing and loosening every time I jumped, and getting called home to dress for church. There were only two Catholic families on our block, so we stood out. So did the lone Jewish household. It was an oil&water mix of being awkwardly outside of the mainstream, and yet special.
I'm sure not all Good Fridays were warm and sunny, but that's how I remember them from this faraway vantage point.


And then came the pageantry of that incredibly long Passion gospel, with the climactic point timed to 3:00 o'clock, the hour at which Jesus died (according to the Catholic church in those days). The entire congregation standing silent and still, traffic noises and warm spring air mingling through the open windows. That amazing story and the atmosphere surrounding it hold me in thrall to this day.


When I grew into choir singing, an entire world of glorious requiems and other Passion music opened up to me. Brahms, Mozart, Bach, Duruflé, to name a few, and this year the Fauré. There's something thrilling about heading out to a choir and orchestra rehearsal on Good Friday morning and putting the whole production together for the first time. It's one of my favourite things.


What has this to do with my tarot practice? Almost nothing, except perhaps the love of story, and connections between past and present.

The deck of mine which comes the closest to depicting these Good Friday memories is
The Grail Tarot, by John Matthews and Giovanni Caselli. 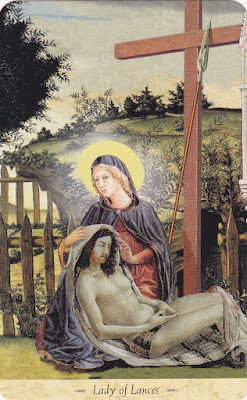 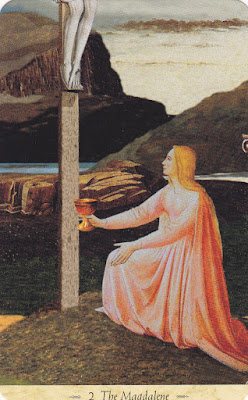 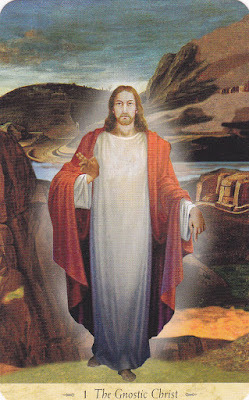 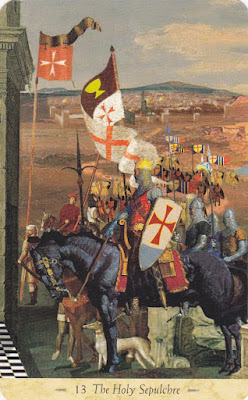