Can tarot help when the wheels fall off? AnnaK Tarot

I never used to think so.
When I was reeling from emotional blows in the past, the last thing I felt like doing was tossing down some cardboard pictures. This is real life going on here - who gives a f*** about some stupid cards?
Can they help with this? Can they fix anything? Hell no. Just leave me alone.

A few days ago, a beloved friend and I entered some scary challenging territory. I was alternately pacing, stewing, welling up with tears. Found it hard to concentrate, to be productive, to settle into anything.
My AnnaK was on the table. I dealt a row of three cards and looked at them. There was some sense there. I laid down two more rows of three.

Here's what I got from the most pertinent cards.

You have many blessings in your life.
Remember all the good that has come from this friendship over the years.
Whatever happens, meet it with grace. Be a grown-up. 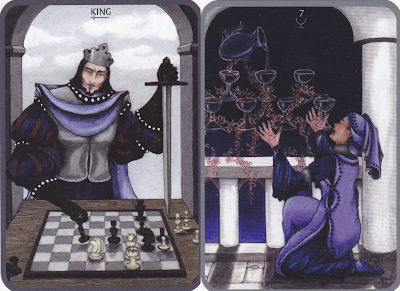 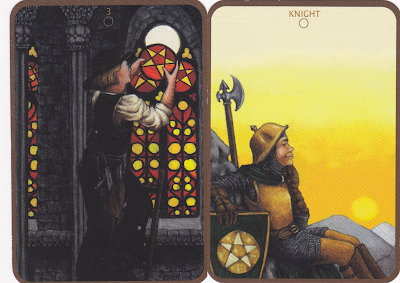 Was this helpful? Absolutely. Thanks for the kick-in-the-pants and the encouragement, tarot.

A Splash of Simple Synchronicities

I love it when things dovetail.
For instance, hearing an actor interviewed on CBC radio because she'd recently published a book, and realizing that she was a bit player in a movie I'd watched the day before. And another actor in that same movie played the lead in a film adaptation of a book I'm currently reading. Which was given to me by a person whose first name is the same as the CBC interviewer. That kind of stuff.

Here's this month's collection of cool connections.
It began in June, wandering through Chapters' bargain books. I love mysteries, and this one looked good. 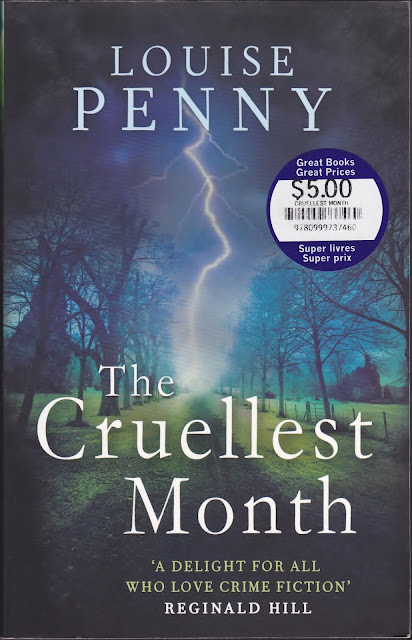 It helps a lot with this kind of thing if you can't remember what or whom you've read before. Delving into this one, I realized as the story unfolded that the characters and setting were familiar. I had read another of Louise's Inspector Gamache novels before. But which one? 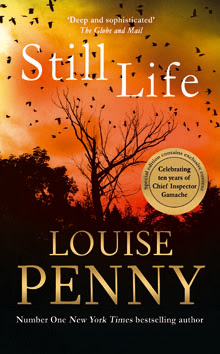 The CBC is my computer's homepage. Scrolling around aimlessly one day last week I came upon an article entitled 100 Novels That Make You Proud To Be Canadian. And on the list was Still Life by Louise Penny. Research the plot. Yes! That's the one I've read.


More clicking around revealed three people who were the inspiration for her quietly wise Chief Inspector Armand Gamache. One of them was Gregory Peck and his portrayal of Atticus Finch in Harper Lee's To Kill a Mockingbird.
Holy cats! Here we are right in the middle of all the hoopla surrounding Lee's second book, Go Set a Watchman. Last month, because of the unrelenting hype around Ms. Lee, I rewatched this movie. 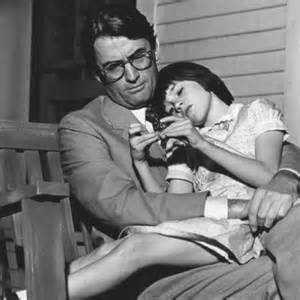 My granddaughter, Emily, and I were sitting on the porch step last week watching a spider work in her web. From time to time, a hefty breeze set the web to swaying. Would it hold? What do spiders do? Why are they good? Yes, they suck the blood out of the bugs they catch in their sticky webs. Yes, that is a bit creepy. We talked about a book called Charlotte's Web that Emily's mom loved as a child. 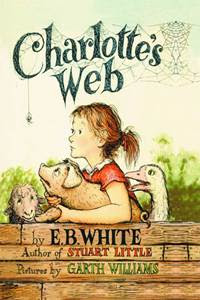 Speaking of spiders, I have some at work in my basement. For this we need to go back to Emily's mom, my daughter Becca. She came over for movie night a couple of weeks ago to watch Anne of Green Gables (also on the 100 Novels list!). I was showing her the de-leaking work going on downstairs, and Becca pointed out some rather beefy-looking spiders hanging around the holes in the bared cement block.
Those are wolf spiders, she said. They're the most aggressive type of spider we have around here.
Will they lunge out at me from all the way over there?
I don't think so.
(A google image search convinced me not to include a picture of a wolf spider here. This is a happy post.)

On the CBC Books page, there's a feature called My Life in Books. A couple of days after Emily's visit and our spider conversation, I learned that the book Louise Penny credits with making her a lifelong reader is... Charlotte's Web! I began reading it that very same day.


This morning, out on the porch with tea before the shade disappeared, I read this conversation between Wilbur the pig and Charlotte the spider. 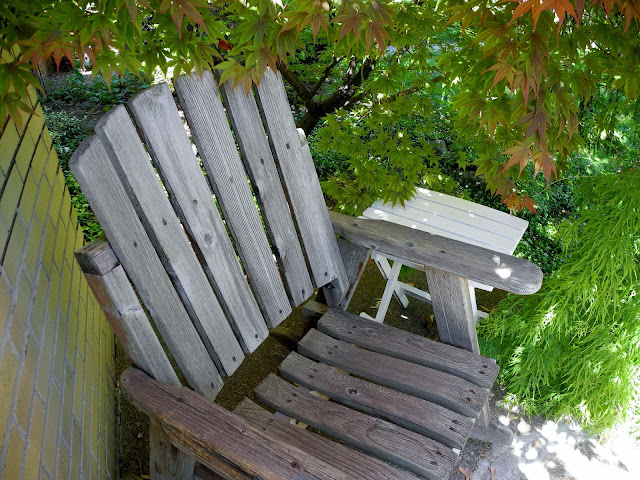 "What do people catch in the Queensborough Bridge - bugs?" asked Wilbur.
"No," said Charlotte. "They don't catch anything. They just keep trotting back and forth across the bridge thinking there is something better on the other side. If they'd hang head-down at the top of the thing and wait quietly, maybe something good would come along. But no - with men it's rush, rush, rush, every minute. I'm glad I'm a sedentary spider."

Charlotte the spider and The Hanging Fairy advise us to Stop, Look, and Listen.

The spread that's in charge

I'm working on a spread that tells ME what we're going to talk about, not the other way 'round.
That wasn't my intention when we began, but the spread had other ideas.
It's in the testing phase ~ so far I've tried it out with seven different decks.
Siamese, AnnaK, Sidhe,
Victorian Fairy, Druidcraft,
Shining Tribe, Tarot Nova


Sometimes its direction is clear with the very first card, and I know immediately where we're going.
Other times it takes two or three cards before I get the drift.


This last time...deck number 8...Vision Quest.
Well, I looked at all 13 cards for a day or so, and the overall gist coming from the central card seemed wondrously exciting and clear. Less so the surrounding "how to" cards. I bundled them up in an elastic and set them aside. A few days later I laid them out again but still nothing was coming clear.

This is a new deck to me (thank you, enabler James Wells!) and some of its images are off the beaten track. I tried again today with a fresh mug of wake up, lady! Ceylon tea and a vase of wild white roses on the table. Perhaps I'll get a hint from the substantial little white book; it's worth a try.


WHOA! I'm on to something here. I take some notes. More ideas flow. WOW, I'm loving this!


And that's all I can tell you for now! Except that sometime this afternoon I'm having some of this.

Things are hoppin' around here today! It's a hive of activity, none of it involving work done by me.


There's a guy in the backyard, digging out rotten old fenceposts and cementing in new ones.
In the meantime, the missing chunks of fence have opened up my vista right through the neighbour's yard all the way to the side street. My horizons have temporarily expanded!


In the front yard, my former student/snow shoveller/weed puller/piano mover has cut the grass
and is chopping out the browned-out weeds that I sprayed yesterday.
Then he'll begin hacking away at what used to be a little clearing by the side of the house.
If things weren't so dangerously desperately dry out West, I'd complain about my rain-enabled jungle.


Meanwhile, in the basement, my handy-man-jack-of-all-trades is ripping off old wall panelling
(no, make that two layers of two different panellings) to find the source of some perplexing leaks.


Old houses hide mysteries.
The basement's dropped ceiling and dreary fluorescent light fixture are history.
What's been discovered lurking above all that? A water shut-off, and it's open. Uh-oh.
Is it in use anywhere? Will something horrendous happen if we turn it off?

"I don't know. It's a mystery."
(You've just been taken to one of my favourite movies; the quote is from Geoffrey Rush's character.)