The Swallowtails Are Too Early, with the Badgers Forest Tarot

The swallowtail caterpillars came too early this year, before the driveway dill grew grandly tall and acquired its feathery heads. The result?

Tiny dill plants, scarcely able to support the weight of the caterpillars, are now digested and all but gone, long before the caterpillars are ready to embark upon their chrysalis phase. These beautiful, perfectly constructed little munching machines have eaten themselves, quite literally, out of house and home. 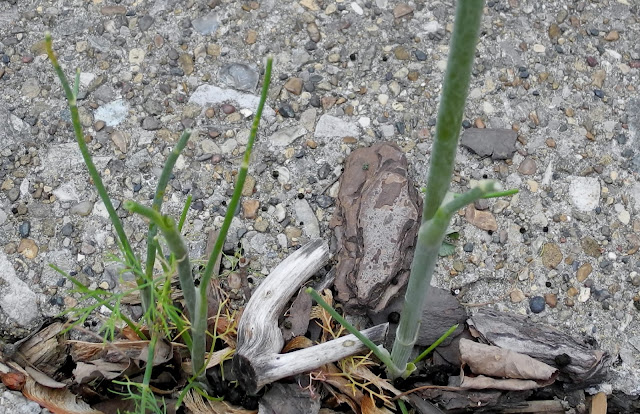 So here they are, wandering dill-less on the driveway, easy prey to careless feet. I am baby-sitting bugs, worried that they'll dry up on the driveway enroute to their next known-only-to-them destination, or fall into a crack and be unable to climb out, or starve to death, or become cat toys. 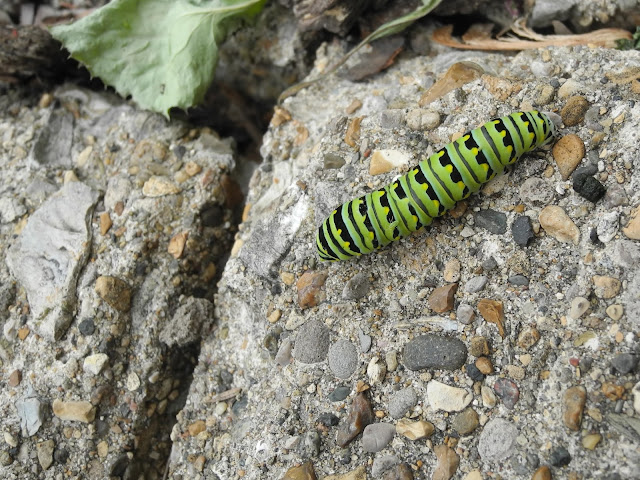 Every hour or so I go out to check on them. Where are they? I'm missing one; uh-oh, am I standing on it? Sweat breaks out...no, there it is. Nudge this one a little closer to the tiny bit of remaining dill.
Should I buy dill plants at the garden centre? Let nature take its course? Survival of the fittest and all that?

Does nature make mistakes? I have no clue how these little creatures find my driveway dill in the first place; it's hard to judge what might be a mistake one year, superb planning or dumb luck another.


When life throws out challenges, sometimes you just have to go out on a limb. 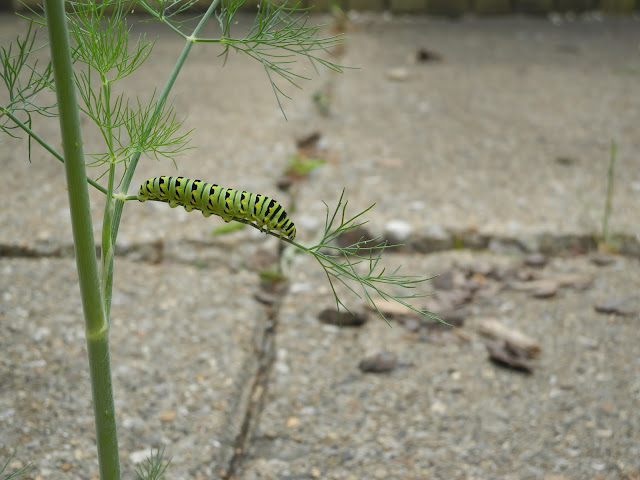 Is that foolish? Could be.

Is life a gamble? You betcha.

Will any of my troupe of five make it to the swallowtail butterfly stage? I hope they all do!


If you'd like to see more about the feistiness of these caterpillars, check this out.
Posted by TeawomanTarot at 18:14

This deck is sometimes called the Complete Tarot Kit, or the Fortune Telling Kit, and comes with a slim folder of instructions and a tiny hard-cover book, Palm Reading. The cards themselves are small and more square in shape than most. They feel good in my hands. The whole package is rather adorable.


That's all very nice but is this cutesy thing any good as a reading deck? Let's ask it.

The questions are ready. I'm shuffling the deck, wondering which cards will show up to take the witness stand. Ooh, two Swords; this deck is here to do battle.

1. You look like you were drawn by kids ~ VIII of Swords
Is that supposed to be an insult?
Kids are creative, free-thinking, fresh, unsullied by the world, smart, observant.
They're good at games and puzzles, and talking their way out of predicaments.
They don't accept defeat easily, even when it looks like they're blocked on all sides.
They are ever-ready to spring into action. Their world is hands-on.
They hear all kinds of secrets when you think they're sleeping. 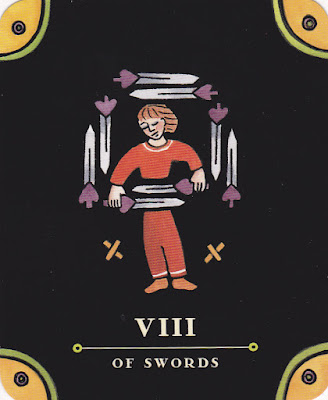 2. There's not much of an image on each card. Is it enough to generate ideas? XIX The Sun
Catch a ride with whatever's going your way. Don't be a chicken - grab hold!
Wake up, be happy! The bluebird of happiness is right behind you.
It's a new day, a clean slate.
Look, Ma, no hands! I can do this.
The early bird gets the worm. Time marches on.
When a bright opportunity comes calling, listen up! 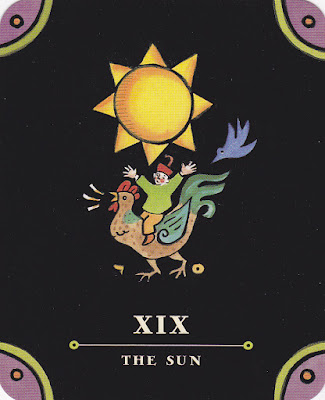 3. Are you just too cute to be taken seriously? ~ Ace of Swords
You call this cute? I am cutting edge; just look at what I did to that vine!
My comments may cut to the heart of the matter, but the blow is cushioned by my
ergonomically designed handle.
I'm comfortable to use but I get the job done. 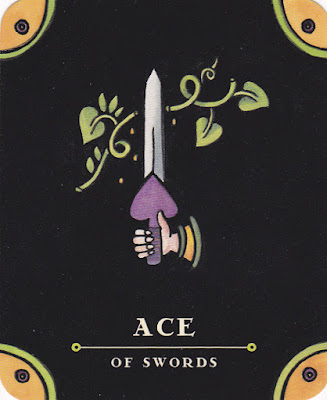 The small but mighty Tarot Nova

P.S. I love the backs.
Folk-dancing, anyone? 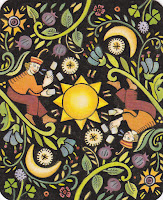 Impaled on the horns of the trimming scissors, with the Aquarian Tarot

To trim or not to trim the Aquarian Tarot, that is the question.

This deck has been around for 45 years and is a favourite first deck of many readers. Mine is new; I wanted to see what inspired all that devotion.

It's not imperative that I crop these borders. They're not obtrusive, distracting, a mismatched colour.

But these cards are quite wide, and I am in the mood for a little project.

However, trimming them is not a thoughtless cakewalk around the edges. Have a look. 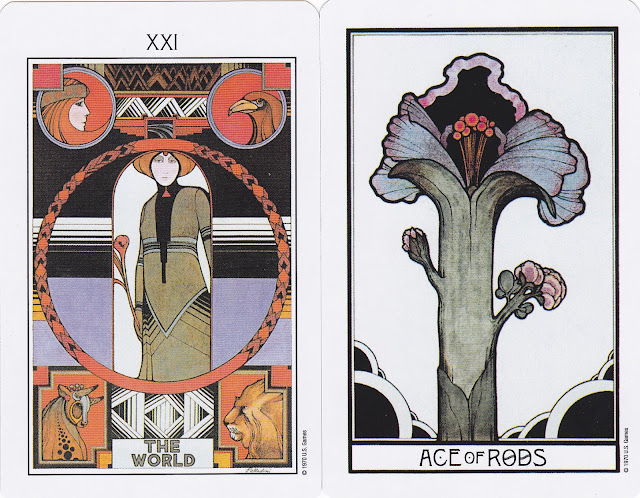 The Majors and Minors have different borders! How tiresome of them. Would that I could merrily snip around the beautifully dark lines of the Minors. Alas, no.

How about the backs? They might be helpful. Nope. Back borders and front borders do not align. 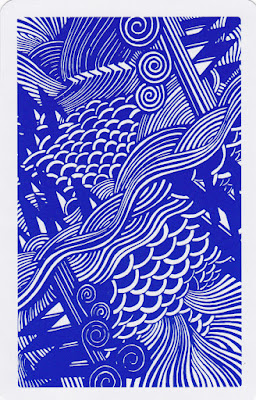 Am I willing to cut into a brand new deck and end up with tiny white mismatched borders? No.
I could take a Sharpie and a ruler, using the black line on the Minors as a guide,
mark the tops of the Majors and slice them off.
No. Too much potential for shaved-off numbers and crooked tops. 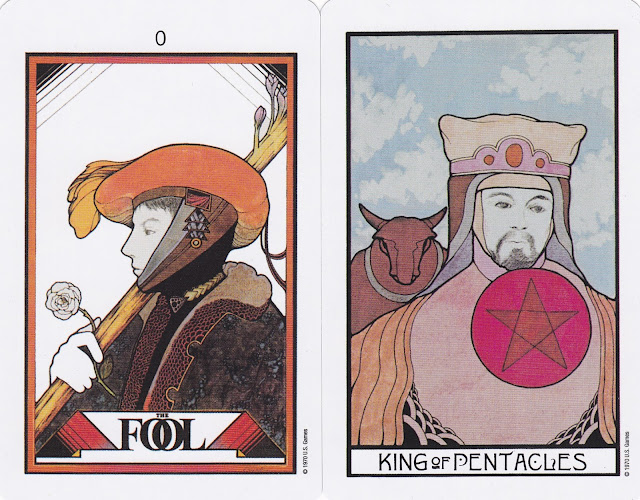 OK, Aquarian, no need to hang onto your hats today. You get to keep your virgin edges!
Be still, my eager scissorhands...

The loss of a friend

In August 2008 I wandered into the travelling Psychic Fair that rolls into town twice a year. I was curious about the tarot readers. Would they be phony, hocus-pocus, weird turban-wearing types? Regular folk? Which decks were on their tables? What did they charge? How did the whole thing work?

I paid my money, got a stamp on my hand, and entered a room ringed by readers and reiki-workers. The centre of the space held jewelry and crystal vendors, tables for buyers and querents to relax, eat the pizza wood-fired on site, and await their reading times. And one stall selling books and DECKS!

Being the deck-collecting nutcase that I am, I went there first. Bev Haskins sat surrounded by her tables of temptation. We exchanged greetings. I looked around her offerings while we chatted. I checked out the rest of the room. Came back to Bev's table and talked some more. I bought decks (no, I don't know which ones; that was 150 decks ago, for pete's sake!). Wandered around. Came back to Bev. She was so unpretentious, you just knew you could trust her. 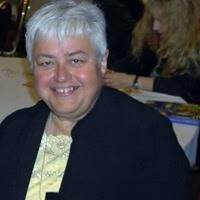 Bev's brochure scarcely mentioned bookselling. She was a reader, teacher, reiki practioner, among other things. So why wasn't she reading tarot, I asked? Because she needed peace and quiet to read well. She needed her own home space at the lake, where she could clear off her wood dining table, light a candle, and plunk down a pot of tea. Where she could swivel around in her chair and open her sliding doors to the neighbour's dog if he paid a visit. Where visitors could look out and see the huge chunks of crystals lined up on the deck rail.

By the time 2009 arrived, I was pumped. Get into that Psychic Fair, get the stamp, and head for Bev's table. I needed a teacher; I was ready to take on tarot in a big way after decades of dabbling.
Did Bev teach? Yes.
Online? No.
Could I take part in her classes in Beamsville? Yes, if I could manage the weekly 4-hour drive (one way) on a night when I was teaching until 9:00pm.
Crap. Now what?

This is where is got serendipitous!
Bev had been thinking about offering weekend retreat/workshop/teaching/ packages and wasn't sure how to go about it. What would people like to learn about or develop in themselves? What to charge? How to structure it?
I offered to be her guinea pig, and we began negotiating dates, schedules, fees. I was in!

Two months later, on Thanksgiving weekend October 2009, I drove up to Bev's Lakeside Retreat on Lake Ontario, for a weekend of learning, discussing, listening to music, preparing food together, sharing copious pots of tea, sitting under her huge linden trees by the lake. There was another woman there that weekend - a psychic friend of Bev's - and meeting her was an interesting perk. The three of us went through the ins-and-outs of the whole deck that weekend. And by the time Sunday afternoon arrived, Bev declared that we would read for each other.

For my reading I chose to use the Maat and the Gaian tarots, side by side. It was powerful. 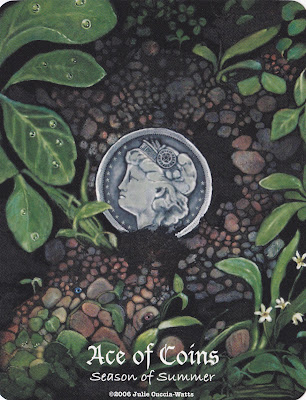 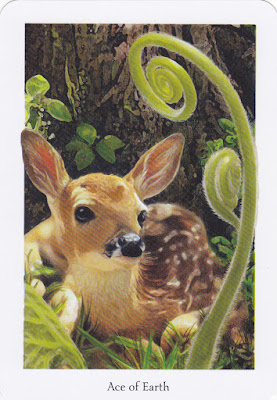 I spent one more weekend with Bev by the shore of Lake Ontario in August 2010. This time it was just the two of us, and we went a bit deeper. Less about card meanings and more about readings and how to build them, blend them, benefit from them.

In the fall of 2011, Bev assured me that I was ready to attend my first Readers Studio in New York, April 2012. Was I ready to read for someone? I asked her. Yes, you'll be fine, she said.

But Bev herself wasn't fine. She never made it to Readers Studio again, despite a valiant fight to regain her health. I planned to visit her this summer.
"Vicki you know you are welcome anytime you'd like to make the trek," she wrote.

This past Thursday, June 4, 2015, Bev passed away.
The world has lost a kind, hard-working, brave, optimistic, earth-loving, nurturing woman. 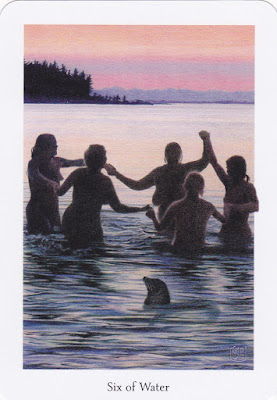