I looked at this deck online when it first came out and didn't want it. Too unclear, too busy, too weird, too something.
Enter the supreme enabling thread: the Trimmed Borders/Altered Decks Index on Aeclectic Tarot. How does the deck look when the side borders are trimmed off? Splendid.
I left the thin white line intact for continuity with the white at the tops and bottoms. The trade-off is that the adjoining edges have a teeny bit of white between them. I'll live with it like this for a while. I can always remove it later, but can't add it back once cut off!

The Fairy Lights Tarot began life as 39 paintings, in a style nudging Impressionism, with a hint of Klimt and a bit of odd thrown in. Each drawing was then cut in half to make 78 tarot cards. This is a LoScarabeo deck, and it comes with the usual LWB in 5 languages, 11 pages devoted to each. Are Lucia Mattioli's card pairings listed in these 11 pages? Only two of 39. I spent a pleasant hour finding the other 37 and getting acquainted with the deck. And then wrote them all down in the LWB!

I find this to be an intriguing idea. Let's see how it works.

8 of Pentacles working her earthly magic and sending it forth into the world.

8 of Wands seeing those plans come to fruition in a fiery splashdown. 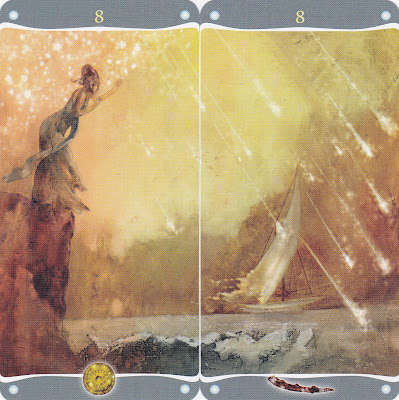 9 of Cups, where feelings fly free, independent of wealth and walls.

King of Pentacles, whose hard work and husbandry built the walls that shelter. 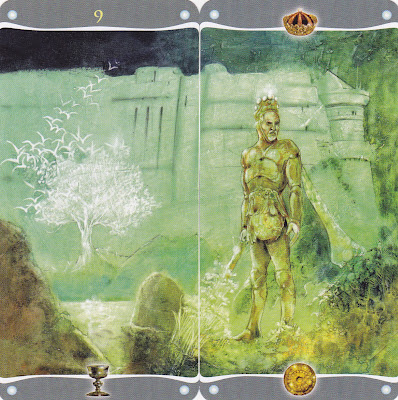 4 of Pentacles taking such care with his hoard, loading all his earthly possessions onto his burro.

XVI The Tower, where the inhabitants have abandoned all their goods in a flight to safety. 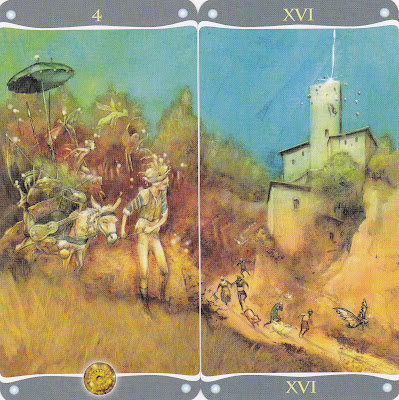 2 of Wands, entering an oasis of what-might-be, if one brings enough insight and energy.

7 of Pentacles, appreciating what is manifest after sufficient work and perseverance. 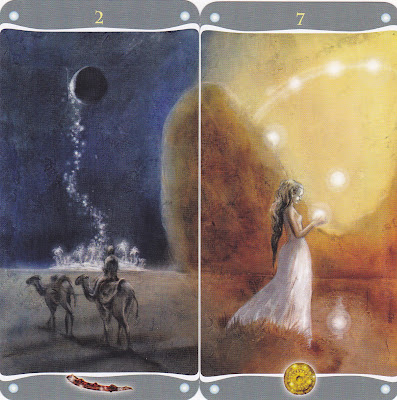 VI The Lovers and the beginning.

10 of Cups, wondering how far have we come? Contemplating the next step. 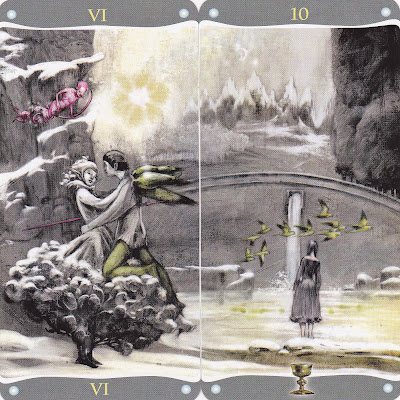