WARNING! If the mere thought of cutting the edges from pristine tarot decks makes you feel like a defiler, quit this post now! May I suggest an alternative? It's a fun read, and no decks were harmed during its creation.

Why on earth would anyone take a brand new, clean-edged, maybe even gilded, perfect deck and begin lopping off its sides? 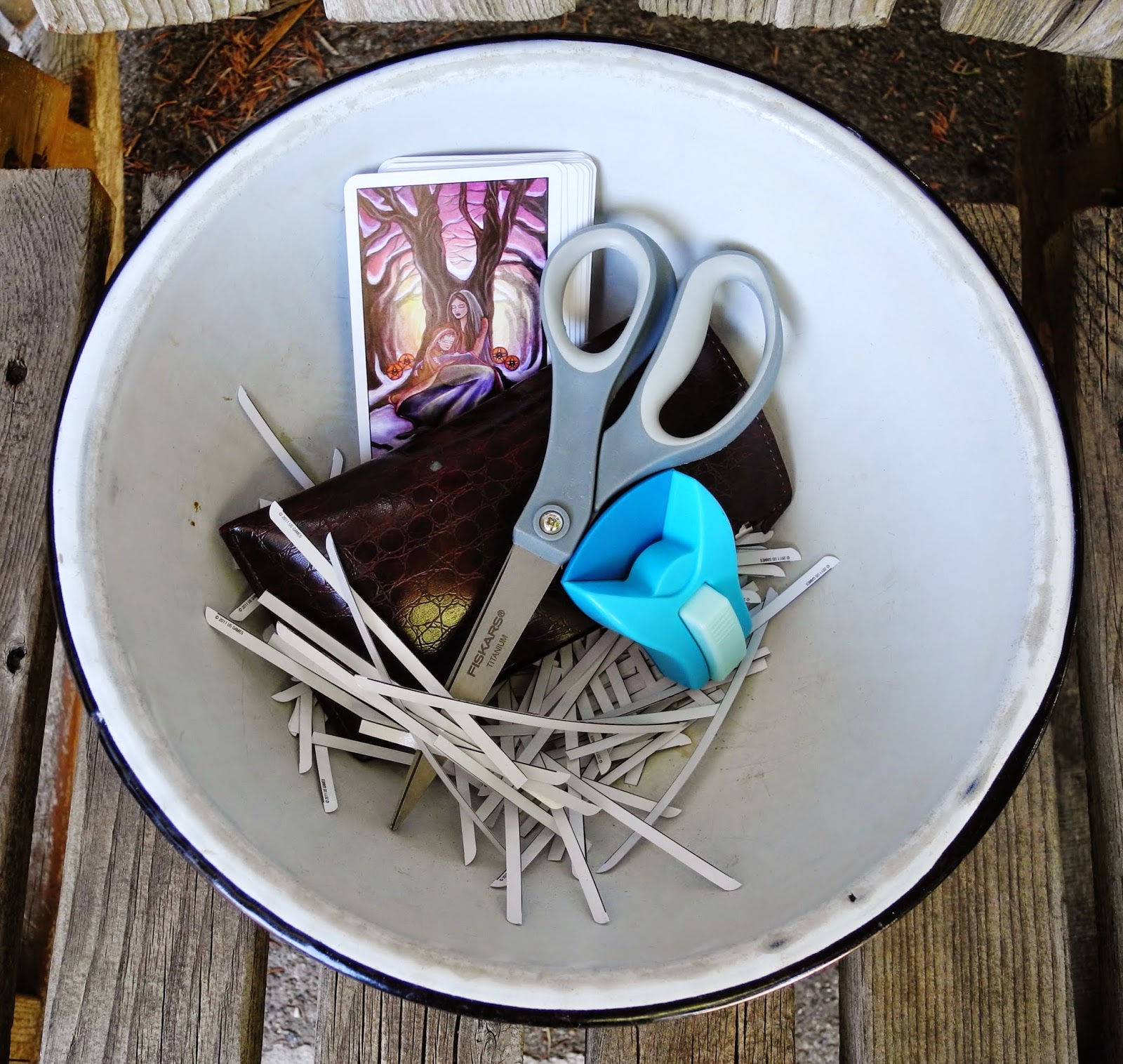 
Here's the Crystal Visions before trimming. I just acquired this deck a few days ago, and it probably won't become one of my favourites (although of course you never know). All the females are 25-ish and shaped liked Barbie, so it's very difficult for me to identify with any of them. However, it reads easily, there's a pleasant fairy tale look to the artwork, and I like the colours.

The borders didn't seem to be contributing anything positive, so I decided to crop them and here's the result. The cards are better able to communicate with each other, and seem somehow more present.

Next up, the Druidcraft. These are large cards and my scanner would only take two of them at once; a lovely simple-to-use program called PhotoJoiner.net came to the rescue. This deck has two borders, a plain white outer one and a decorative green inner one; together they push the images far away from each other.

One option would be to simply cut off the white borders. I decided to trim off both borders, including the words at the bottom of the card. (I kept my original untouched deck in case I couldn't decipher the newly cropped cards!) I like how the landscapes meld into each other, creating a panoramic effect.

Now the AnnaK, Llewellyn's edition, which has slightly larger cards and borders than AnnaK's artist edition. I like that the colours are a bit brighter and clearer than in the original version.

Although the black borders are quite narrow, I opted to trim them off, making for easier handling. This is one of my go-to decks, so I don't need the card titles. This deck now feels more like a small flexible tool, and less like an engaging collection of coloured cards.

The Sidhe caused me quite some consternation. They are an opinionated bunch, and I wasn't at all sure they'd like me messing around with their boundaries. The cards are wide and a bit sticky, making them challenging to handle.

Well, they were highly indignant at first, and wouldn't speak to me for ages. I'm happy to say that they've now come down off their high horses and are once again voicing their opinions. (Don't tell them, but I may buy a third deck and trim off ALL the black. Sshh.) Cropping brought out the merging swoops, swells, and curves of the landscapes.

Two videos got me started on the how-tos of deck trimming: Donnaleigh's and TarotOracle's. Their styles and tools are very different. If the card stock is thin-to-medium and the edges of the images well-defined, I use scissors and the corner rounder pictured in the bowl at the top of this post.

Pop on your favourite movie, grab some scissors and a deck, and have fun!