I am missing Prague SO MUCH right now, thinking back to last summer's once-in-a-lifetime trip. This was taken on a blazing hot day from the grounds of Prague Castle, overlooking both sides of the ancient city. The Vitava River, which glides through the centre and scenically divides Prague into two parts, can be seen in the middle distance. 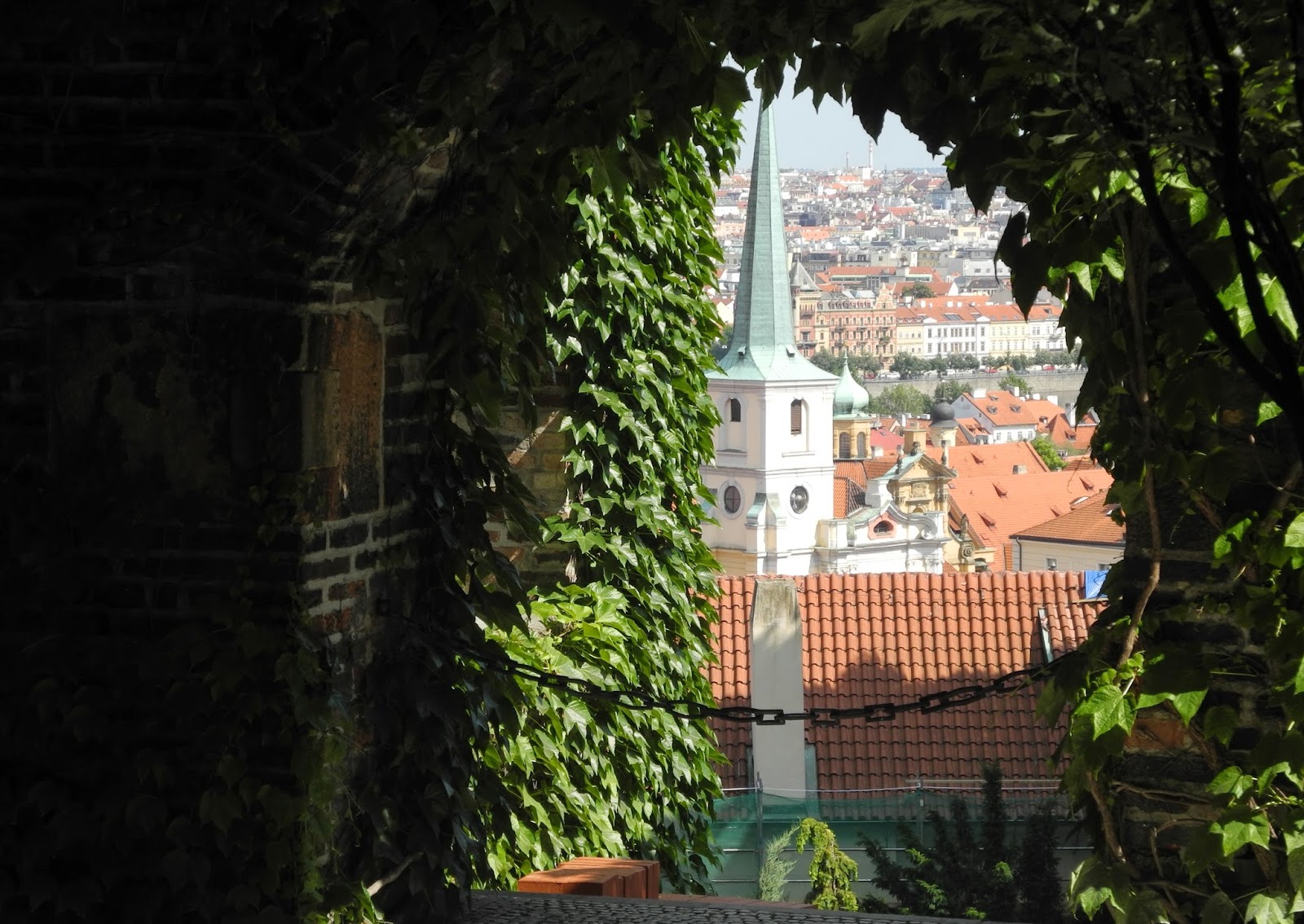 If this were a tarot card, what might it be saying?

Look on the bright side.
Window of opportunity
Light at the end of the tunnel
Do you have tunnel vision about the situation?
Seeking the broader view
The big picture
What dangers or delights might be hiding in the shadows while my attention is drawn to the light?
What goodies in the ivy am I missing out on because I'm dazzled by the inaccessible panorama glimpsed through the archway?
The grass is always greener on the other side.
Wonderful vistas await if you come out of hiding.
What's stopping you from taking that beautiful leap?
What message is inscribed on the bricks left of the archway?
Is the chain protecting or impeding?
Is someone looking back at you from the tower?

The Pages of Wands with great news and some advice

We are excited to announce that Teawoman's proposal for
a PM Study Group at Readers Studio 2015 has been accepted!
It's official! Woo-hoo!


High fives! We can't wait to get there!
Looking forward to it!


Teawoman, please stop jumping up and down, and pay attention.
We have some advice for you.

It's not too late to try something new, even though you're old. It might be scary; don't run away.


Go ahead; be all lit up about what you're demonstrating.
Enthusiasm is contagious.

Just don't set fire to anyone.


Look serious, like you know what you're doing. If you can't manage that, blind them with your bling.

Or pretend you're Audrey Hepburn in Breakfast at Tiffany's. Everybody loves her, right?
Try not to resort to cheap tricks to get their attention.

Feel free to be yourself.

Play nice with the other kids.

Try doing some relaxation exercises before the class. And remember, our Gift to you is Courage!

Love from the Pages, Children, Kittens, Ladies, Princesses, and Magic of the fiery suit of Wands! 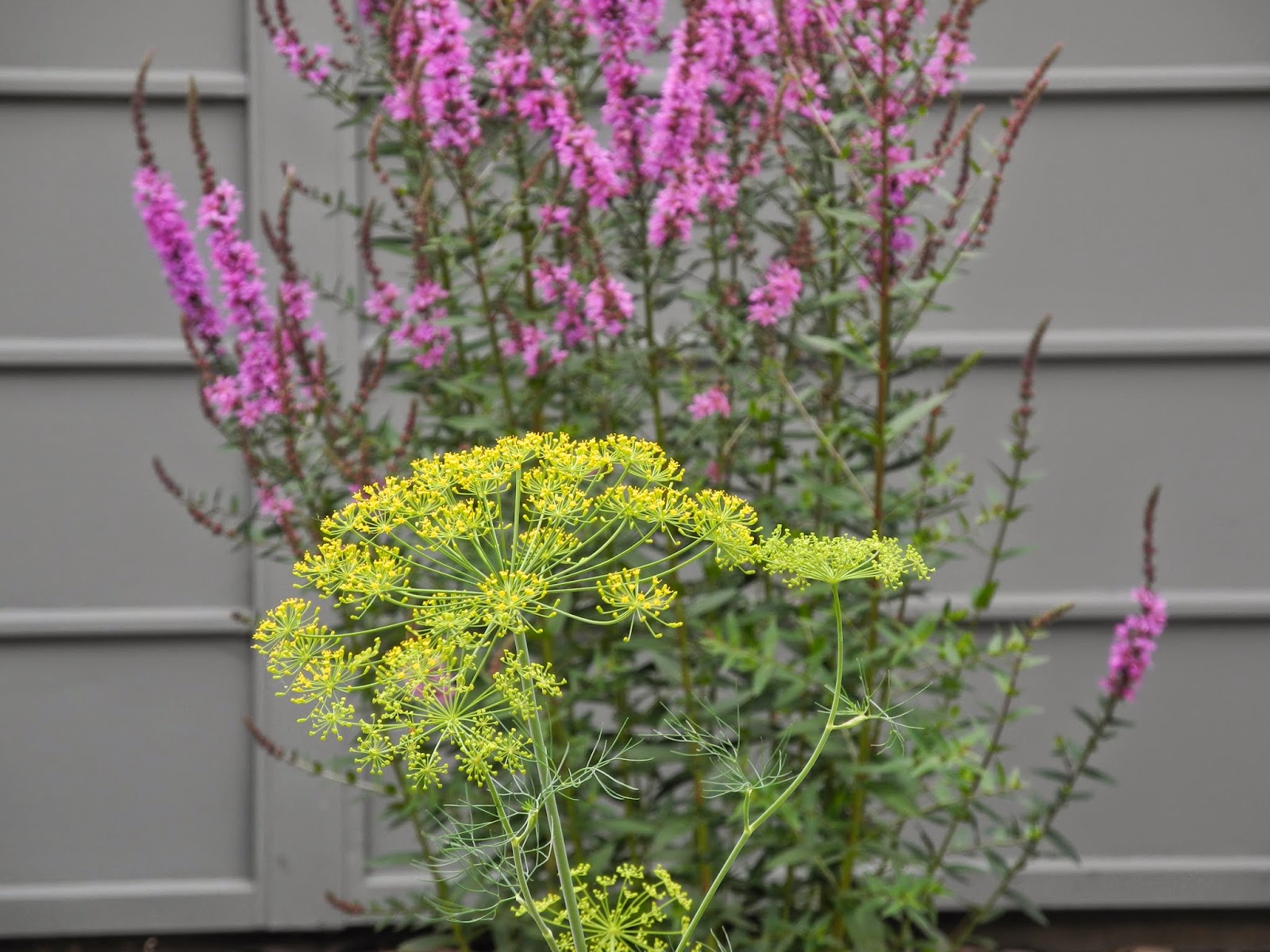 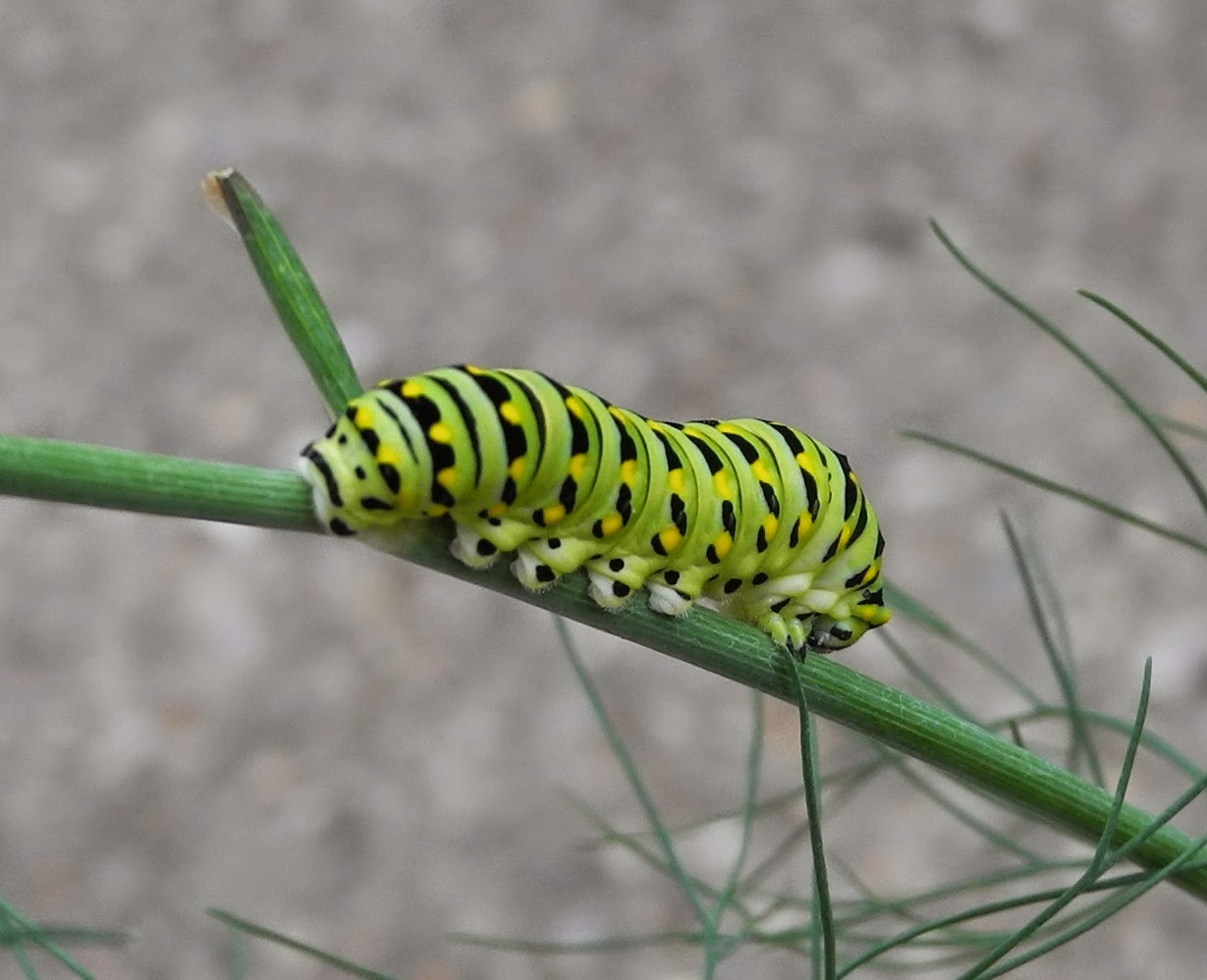 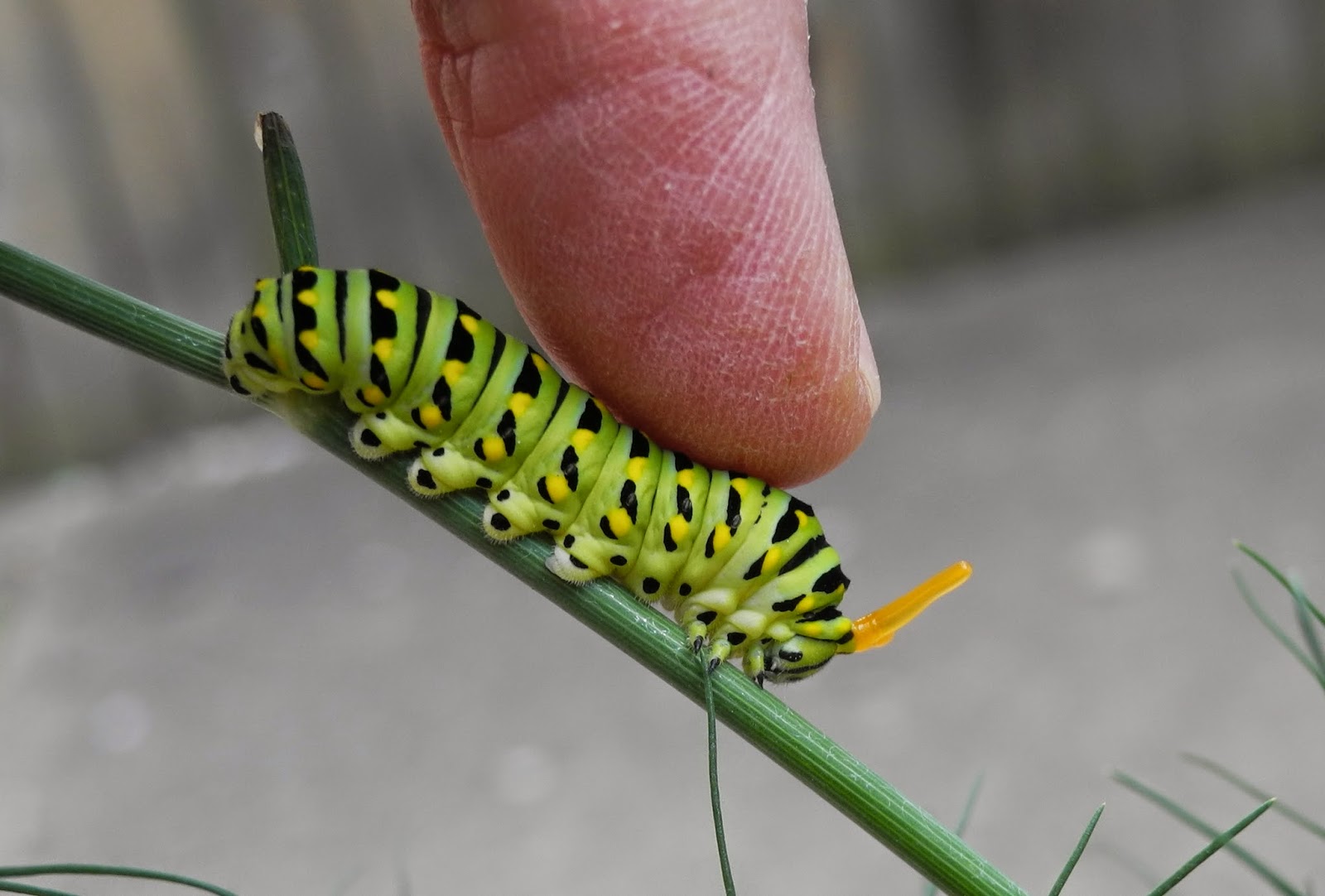 I want this to be a post you can sink your teeth into.
And I've been stalling, fearing I won't do the scholarship of the deck and its creator justice. 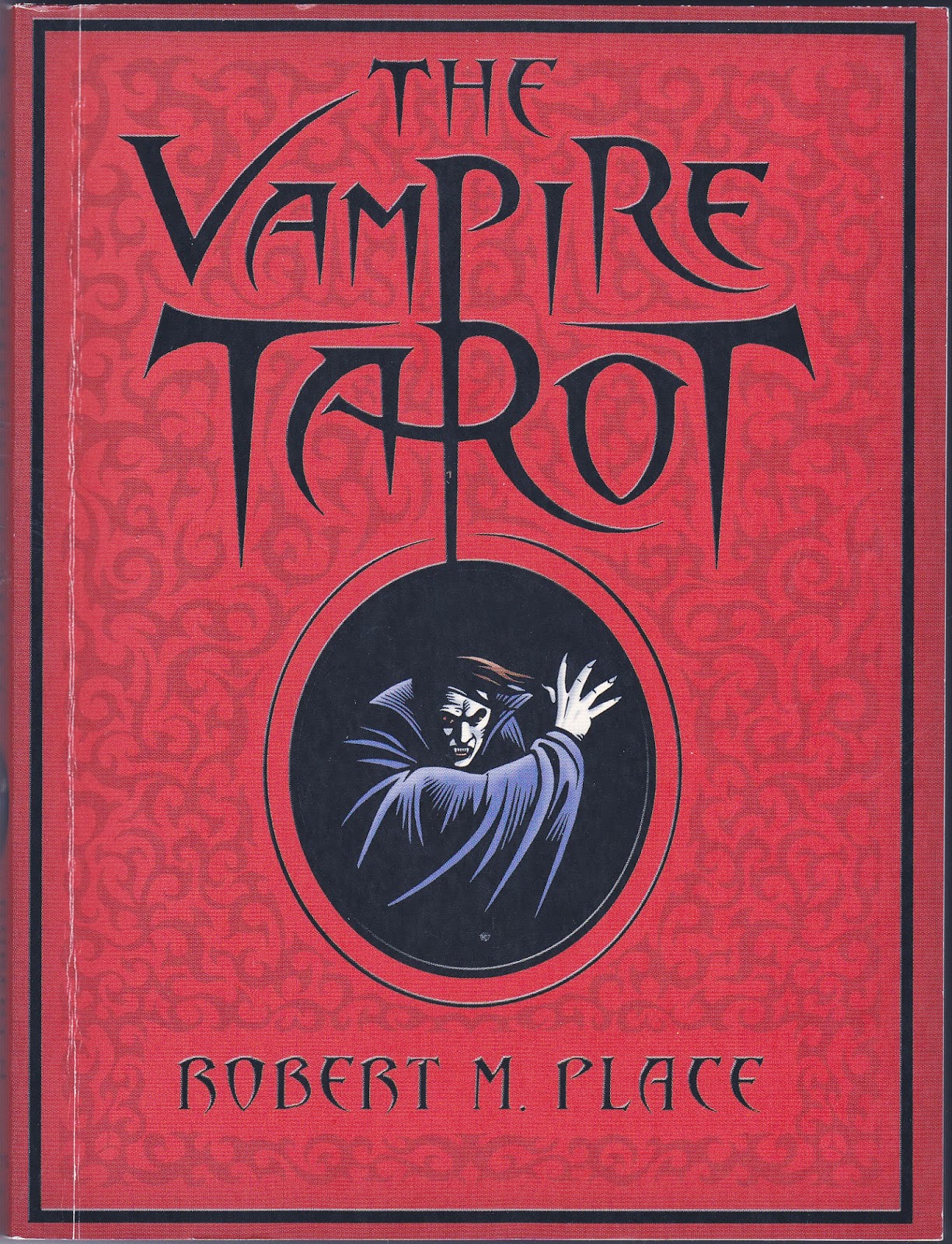 May 2014
After spending a couple of dark and delicious hours reading background material in Place's companion book, perusing the deck's Majors, and sitting with my Kobo and some early chapters of Bram Stoker's Dracula, I felt a need to go outside and drink in some spring sunshine. 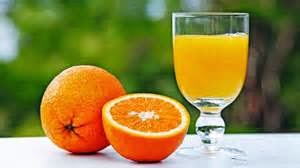 April 2014
Robert Place was set up in his usual corner at Readers Studio, displaying his decks, books, art, handmade silver jewelry, and conversing generously with anyone who stopped by. 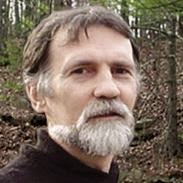 He's an impeccable researcher as well as an artist. I had to ask him why a scholar and historian would choose to produce a Vampire tarot. The topic didn't seem to fit with his earlier works (Alchemical Tarot, Buddha Tarot, Tarot of the Saints) and surely was too trendy, trashy, teenagery to lure in the likes of Robert M. Place.

How wrong I was! He eloquently explained the links between alchemy, Buddhism, Christianity, tarot, and vampires. Unfortunately I wasn't taking notes and have a memory like a sieve, but all have to do with seeking transformation, and variations on eternal life. Catholics and other Christian religions drink a stand-in for the blood of Christ at every service. The connection between alchemy and vampires is particularly strong; the Philosopher's Stone is said to be a red liquid.

His court cards feature a blend of real and fictional characters; we find Bram Stoker, his family, and his musician and artist friends (Franz Liszt, Lord Byron, Pamela Coleman Smith to name a few) alongside characters from Stoker's novel Dracula. Place has tastefully identified vampire characters by a tiny trickle of blood dribbling from their signatures on the cards.
He told me that he deliberately left the card corners sharp, as befits a Vampire deck! 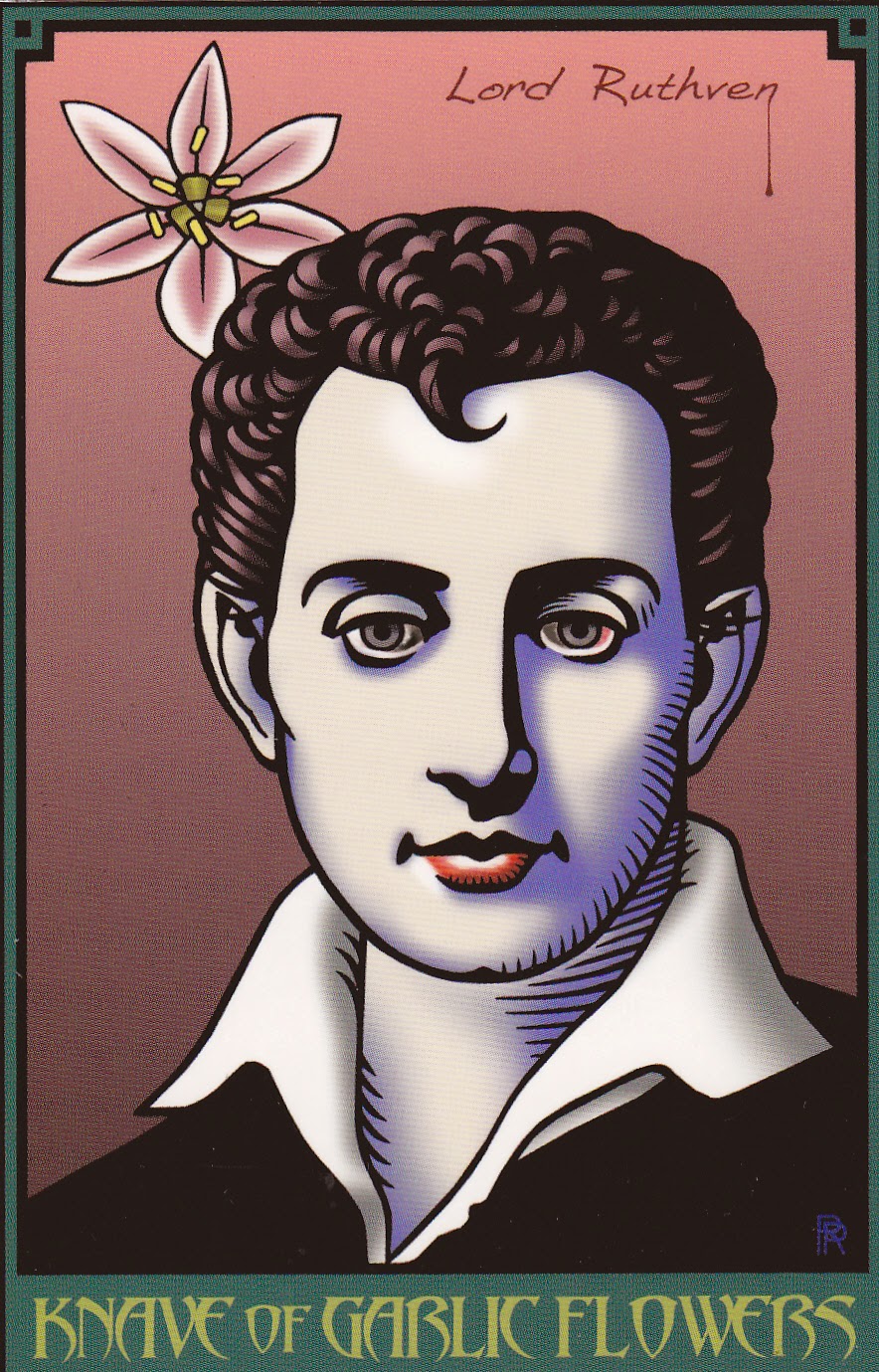 July 2014
Shuffling much more slowly and carefully than usual, I laid out cards for the following questions.

1. What do you consider your best feature? Nine of Knives 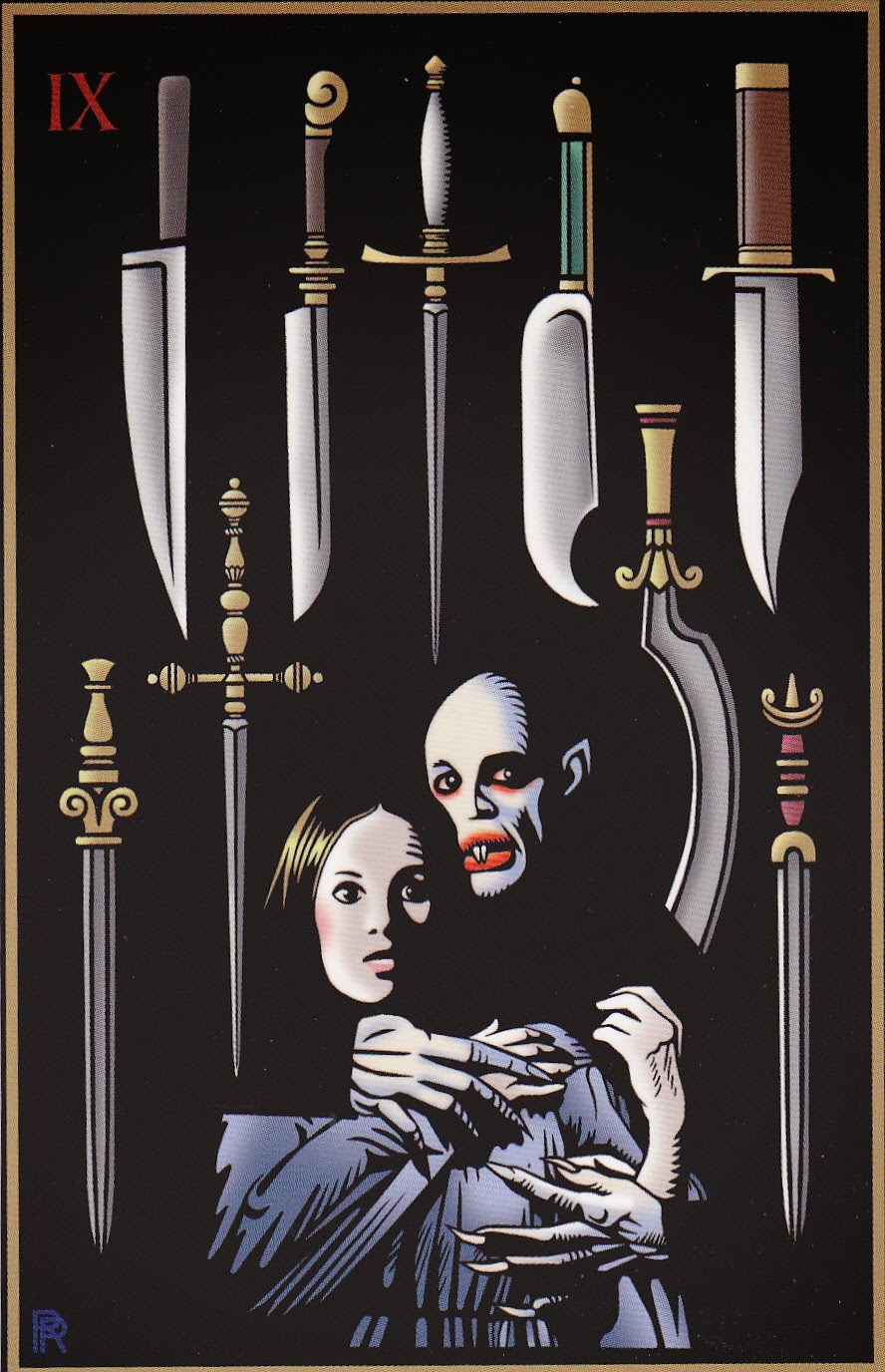 My elegant artwork.
My images never sacrifice beauty and readability for gore and sensationalism.
I stay true to Stoker's elevated literary standards and I use what we know of vampire lore to sharpen my observations for you as my reader.

2. Do you have a weakness as a tarot deck? Six of Knives 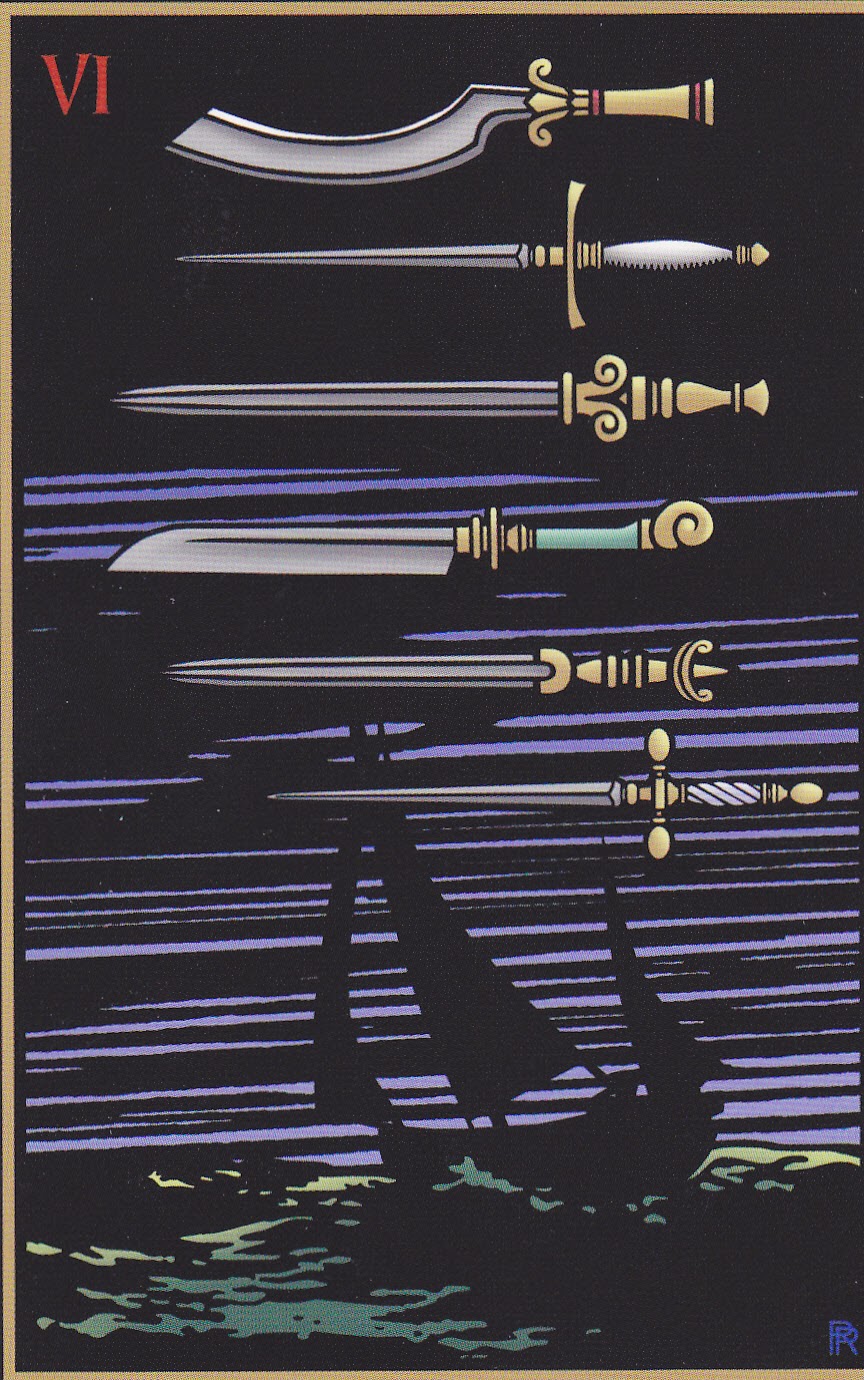 I am not aware of any.
You, the reader, may find my secrets hidden in the hold of the Demeter as Count Dracula makes his way to England.
Sneak aboard and plumb my depths.
Try not to be alarmed by my occasional stormy elements.

3. You're a little bit scary. How do you recommend I get acquainted with your style?
Ace of Garlic Flowers 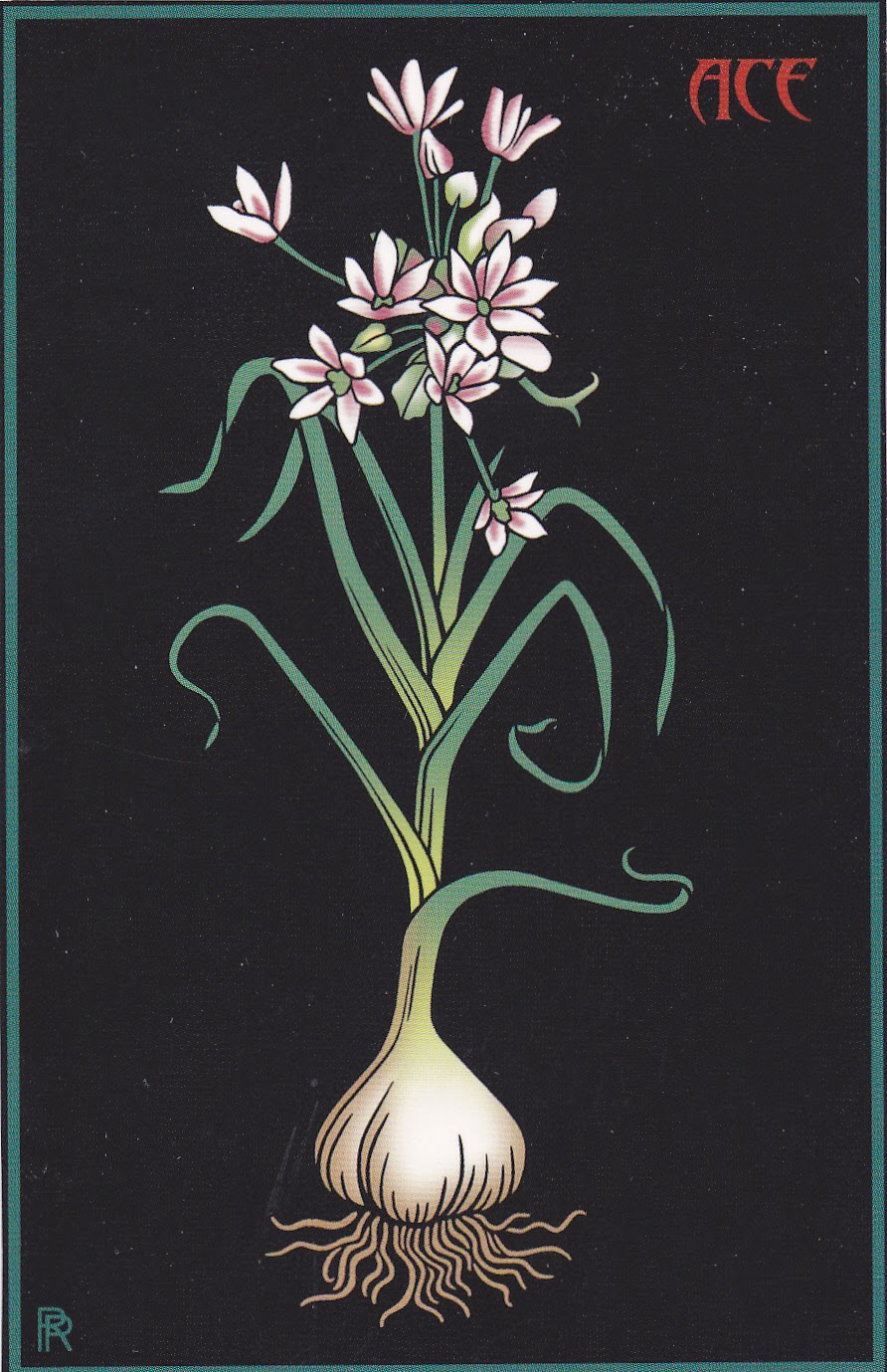 Begin at the beginning.
Learn of my roots and grow alongside my wisdom.
Not all my images are frightening; some are quite gentle.
I can't hurt you if you stay close to the garlic flower.


Thank you, Vampire Tarot. I appreciate you taking the time to converse with me today.
Posted by TeawomanTarot at 11:24