I'm being followed by a moonshadow was written by Cat Stevens in 1971, and that’s exactly how I felt on the night of April 15th. 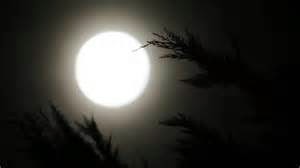 An unusually penetrating light was shining through my south-facing windows - not a streetlight, not the floods over the driveway; the neighbour's house was dark so it wasn't coming from there.
It was the full moon, and it took my breath away. Casting shadows outside in the yard and inside my dark kitchen. It was mesmerizing. Why is that?
There’s something unexpected about the dazzling brightness of a full moon that seems magical, improbable, irresistible. Like it’s talking to us, looking right at us, staring down at us with unblinking purpose, making the zany seem sane and the impossible within reach. The cast of Moonstruck certainly seemed to think so.

April 15th 2014 was a big day for the Moon. In the wee hours it became the Blood Moon as it underwent a total eclipse. We’ll be treated to three more of these between now and September 2015.

The Moon XVIII is one of my favourite cards in the tarot deck. I guess I’m moonstruck! I like its aura of mystery and the fact that its appearance is always changing. Not straightforward, not boring. Like tarot, come to think of it!
And 18 reduces to 9, my favourite number. So... nine Moon cards.

Looking through the XVIIIs in my decks, I realize that some fall into the beautiful dreams camp, while others are more about illusions and disillusions. And of course there are those holding down the middle ground: dreams are good as long as we realize that they may not survive come the cold light of day.

Let’s begin with a RWS-like image as seen in the Druidcraft. Two stone towers, a moonflooded path threading between them, luring us up the hill between howling wolves to the unknown; a watery crab docks on a rock to observe. Moon, water, intuitions, dreams, fears, fantasies. 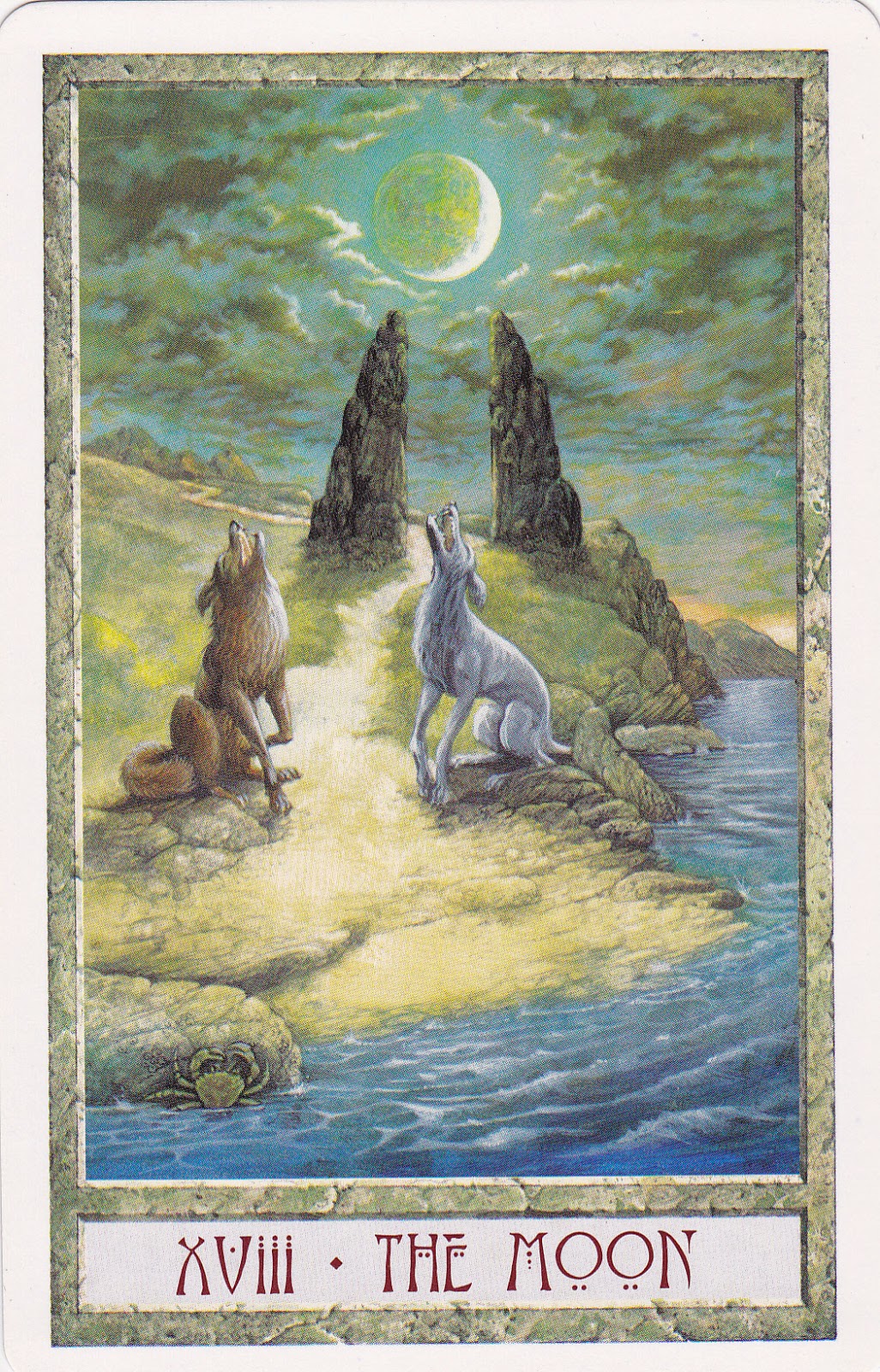 In the Dreaming Way the watery world of the crab plays a much larger role and the wolves have disappeared. The moon takes on a green-cheese-with-spectacles look as it peers over her shoulder.

The Dark Goddess deck features Arianrhod, Goddess of the Silver Wheel, and she IS the Moon. I like the image of the turning wheel; it brings in the passage of time to add to the layers of this card. 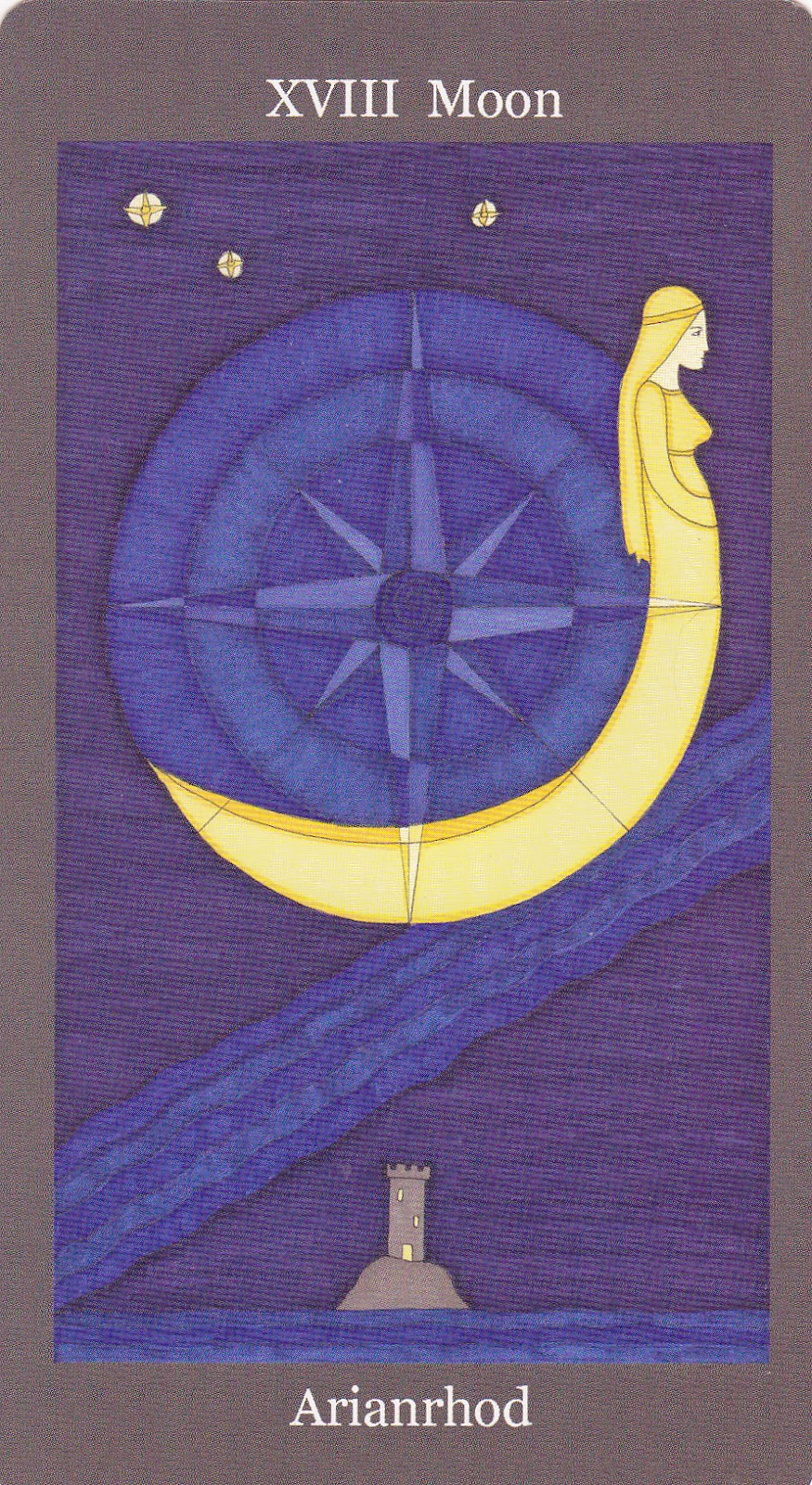 The Art of Life tarot focuses on dreams - not the sleeping variety, but those that keep our hopes alive. The dreams about how our life might unfold, our aspirations. 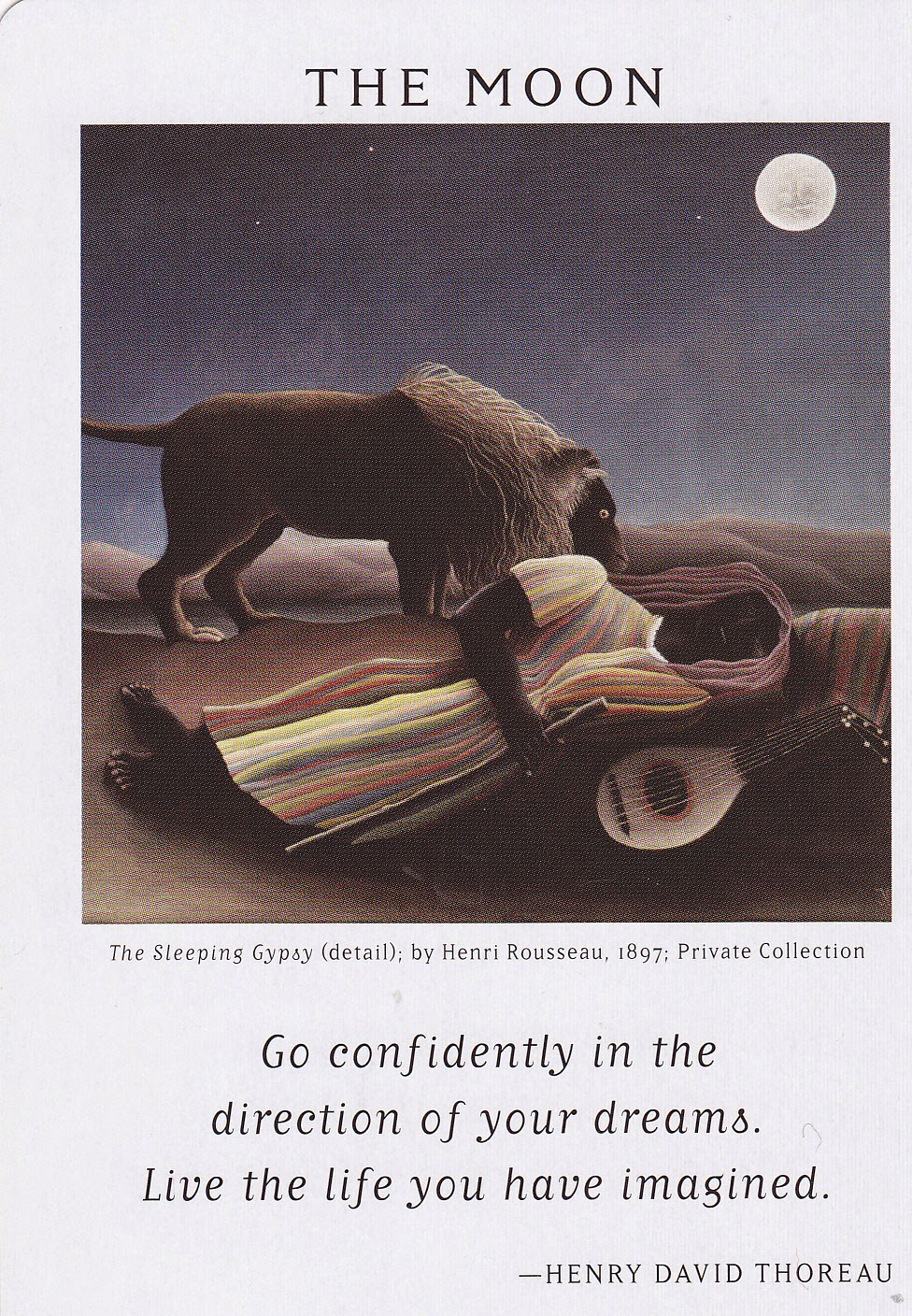 Sweet dreams, have a good sleep and wake refreshed - these are all included in the Housewives Tarot. There are hints of 1950's ads here; use our face cream and pink hair curlers, buy our mattress, and you'll awaken rejuvenated and more beautiful than ever. 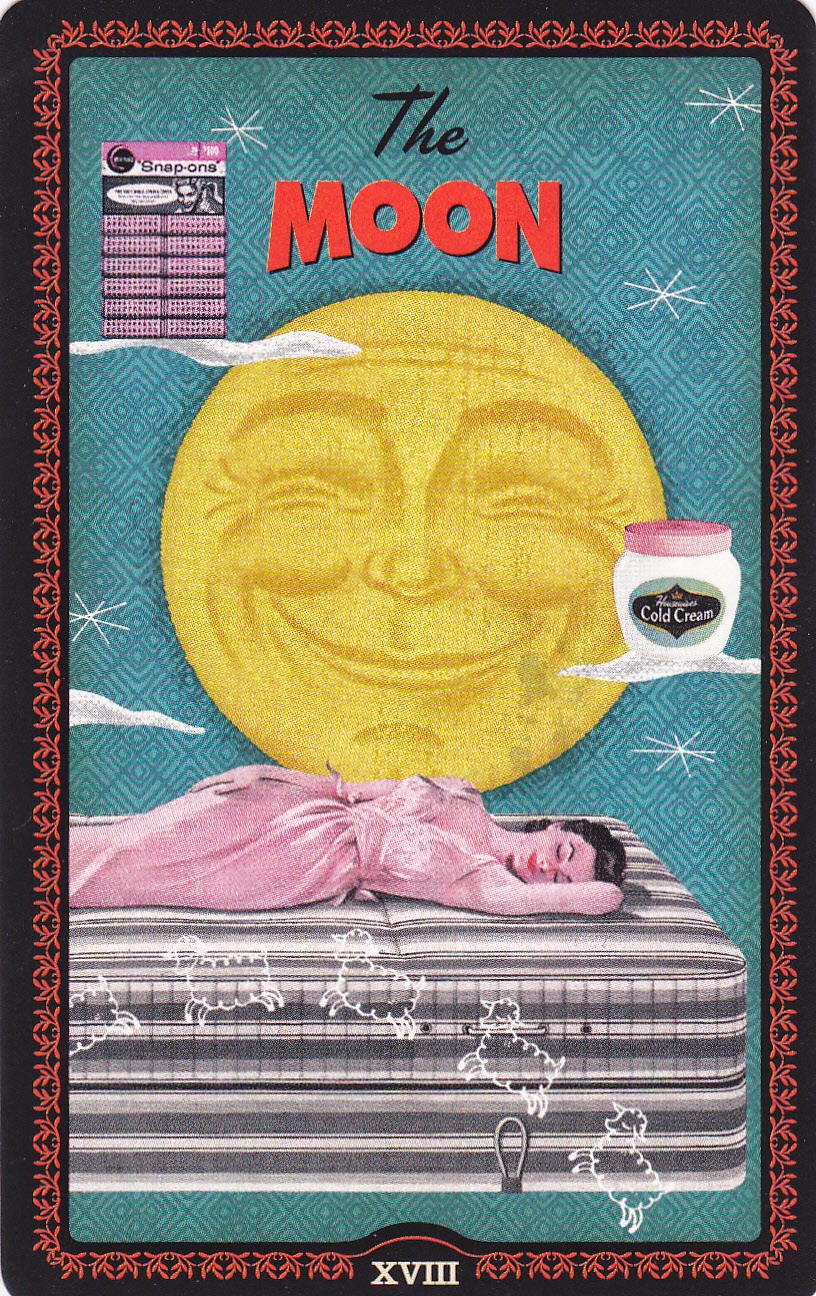 Staying with Hollywood's version of the world in earlier decades, we come to the illusions used on the silver screen during the Golden Age of Hollywood. Early film versions of werewolves, monsters and mummies coming alive to do their worst by the light of the Moon. Evil lurks under that silver orb! 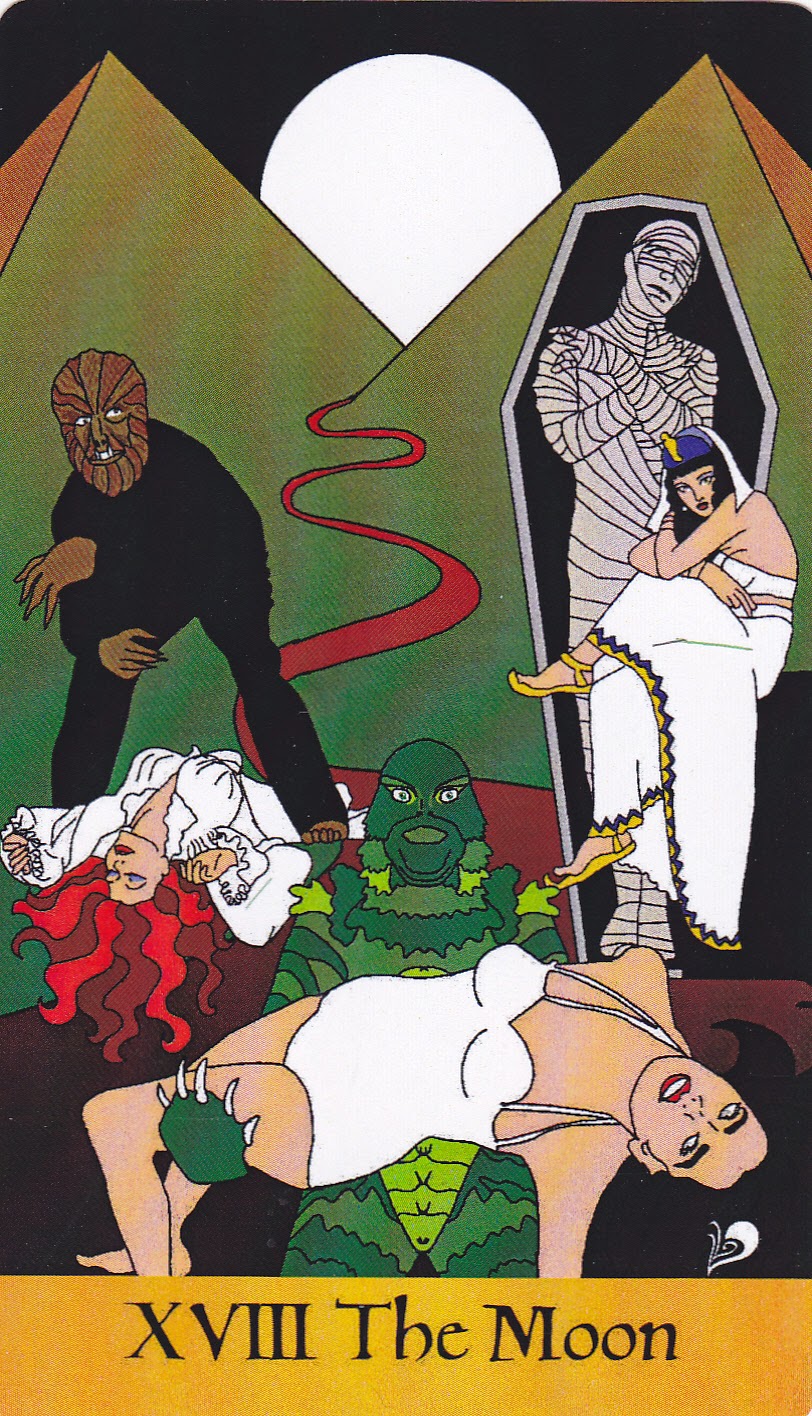 The Fantastic Menagerie shows us an Owl being hoodwinked by her illusions. A mouse, her meal of choice, is shadowed against the surface of the Moon taunting her with its inaccessibility. Even the wise owl is not immune to the allure of the full moon. 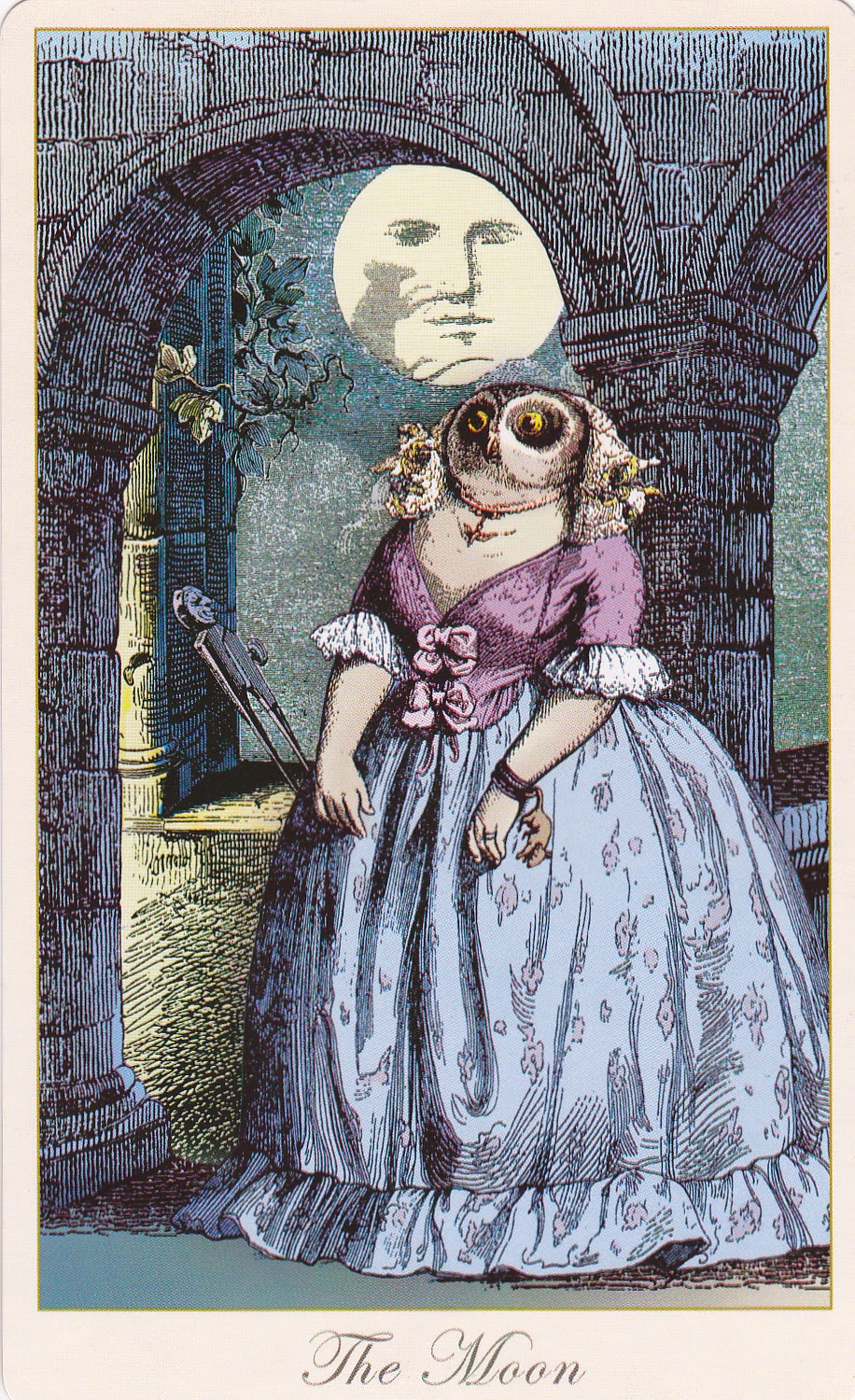 Tarot of Jane Austen's Emma Woodhouse has made a terrible mistake! Her fears multiply unchecked under the fantastic light of the full moon. In her relentless matchmaking, she may have matched the man she loves to another woman. 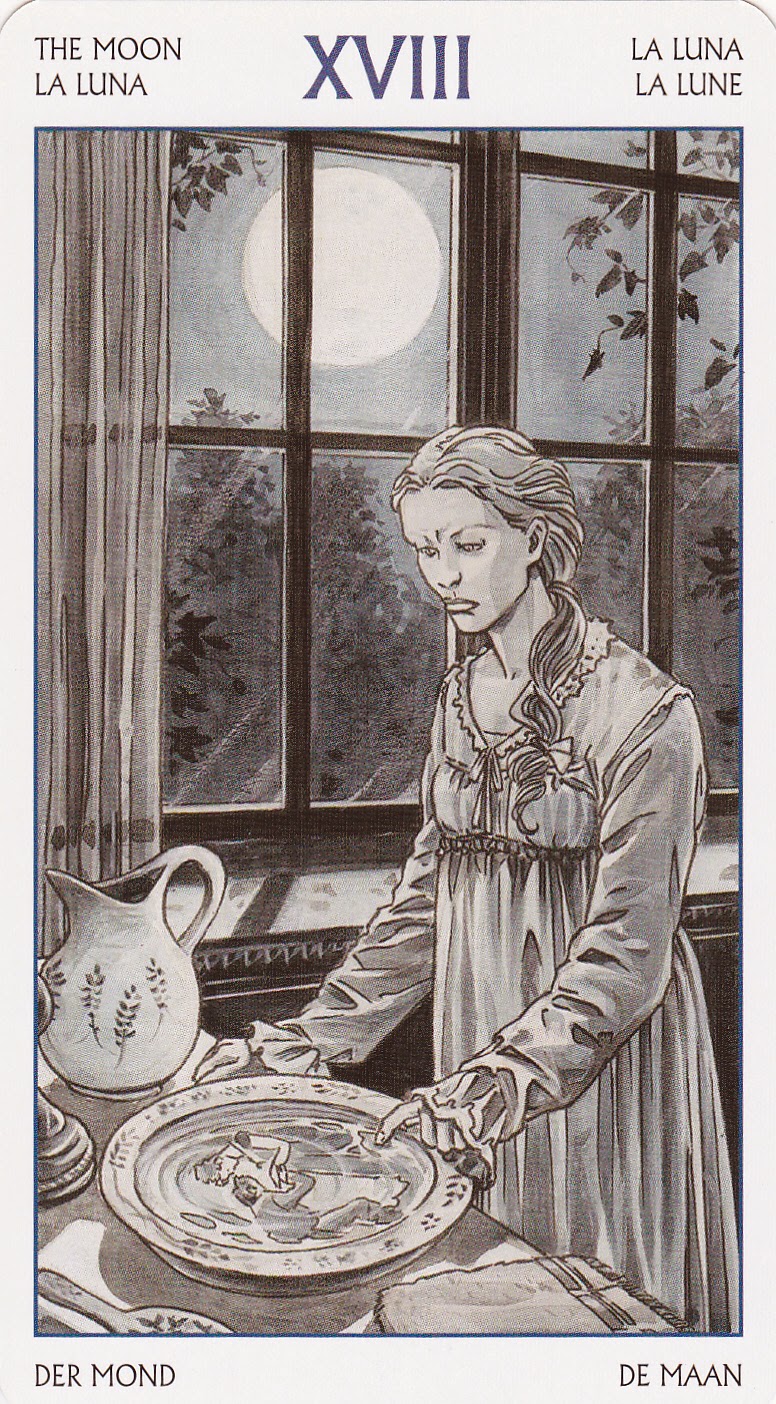 The always thought-provoking Circle of Life has foregone the small crab image and instead given us a massive sea-squid supporting a water goddess (or perhaps mermaid) in its tentacles. It looks on with one huge eye as she drinks in the rays of the Moon. 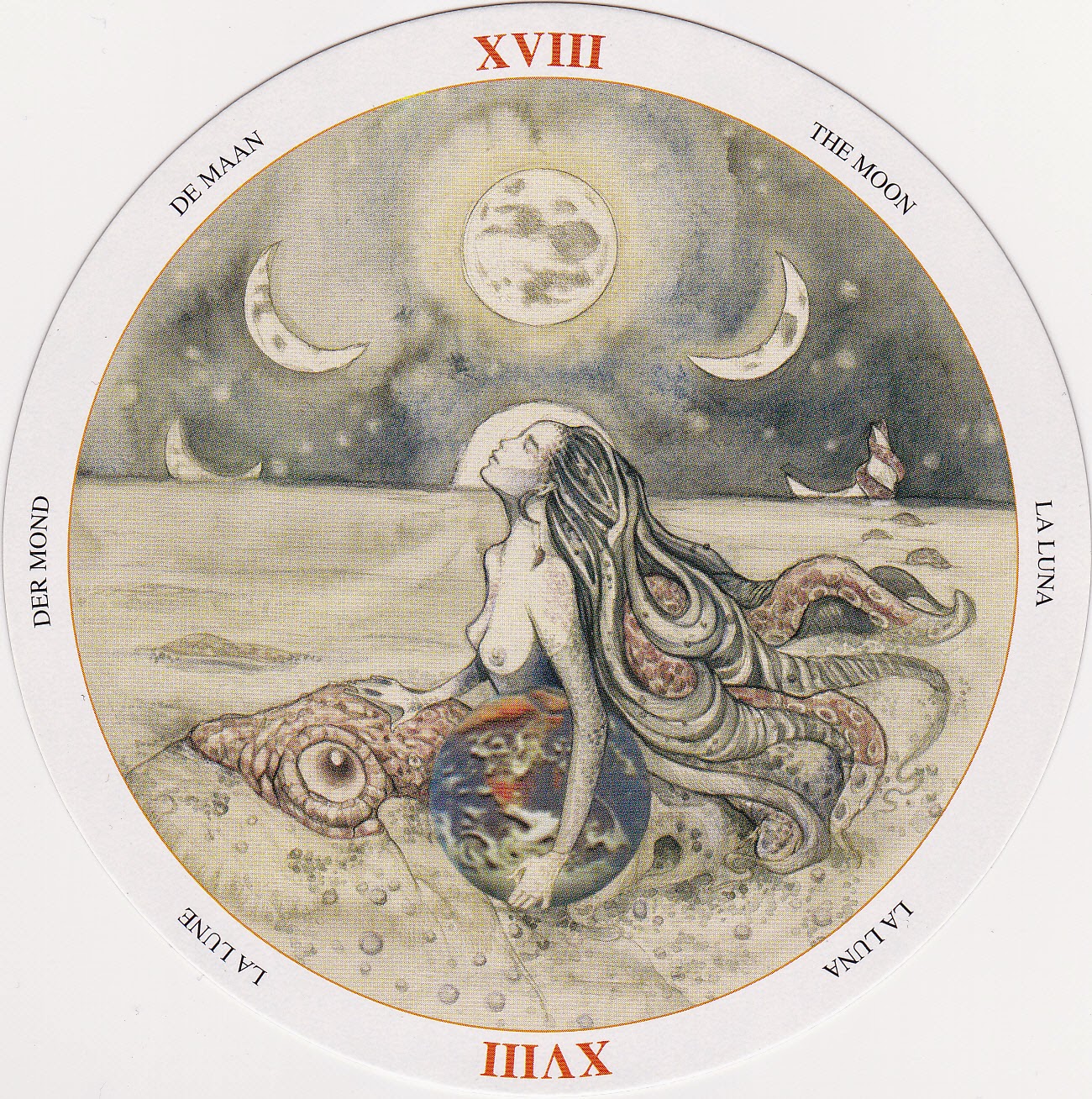 If one is self-employed and works from home, tax time is full of:


In fact, at times it feels as though working on taxes will be the death of me! So after 8+ hours staring at the computer screen, my eyeballs are ready to look at something more satisfying.

The Death card is one of those few that finds its way into silly creepy movie scenes which are largely responsible for people’s erroneous take on tarot. Poor Death, Devil, Hanged Man; it's not their fault!

I actually like the Death card in many decks; it’s loaded with atmosphere and juxtapositions. Now that I think of it I'm rather fond of skulls; they have a pleasing smooth shape that fits so well under the hand. I have a little one carved from peony stone which sits on a sideboard, amicably mingling with more mundane rocks.

Druidcraft’s Trump XIII is a beautiful piece of art; lush colours, interesting tools and objects; a peaceful mood not unlike Temperance XIV, the very next card. And this Crone can't resist that smooth round shape under her hand either! 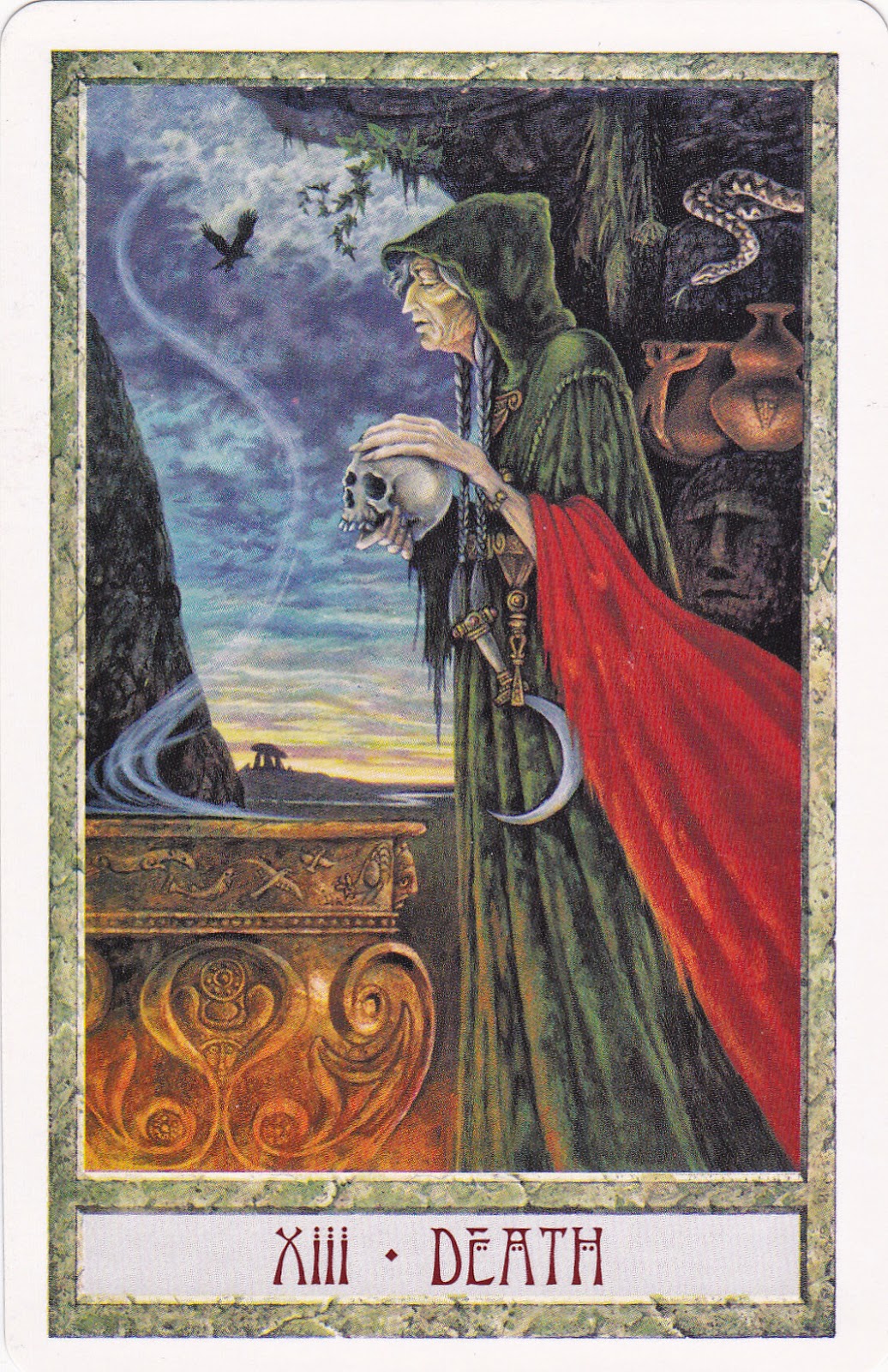 The AnnaK’s Death XIII came up in a reading this week concerning energies surrounding a woman’s waiting for a man. Roadblock; the path to that particular scenario is good 'n closed.
It looked to me like she could die waiting for that guy to contact her. 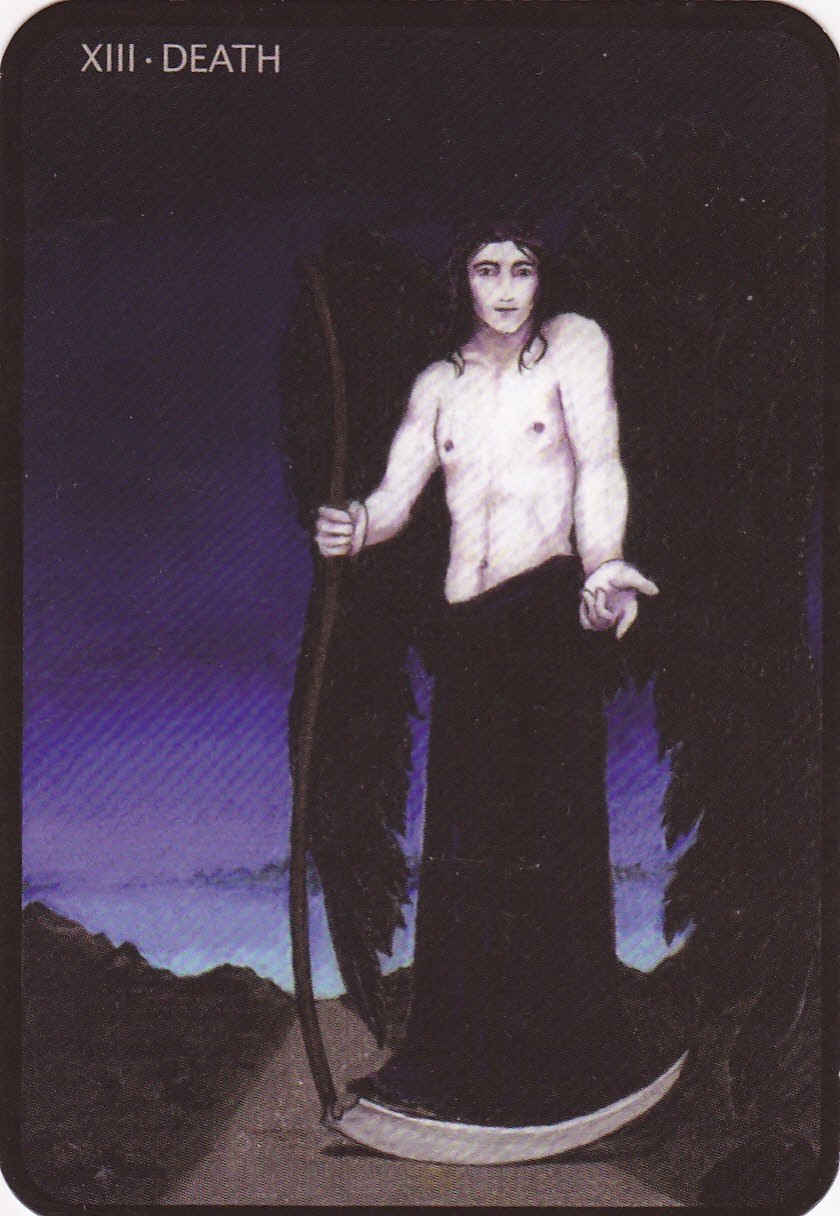 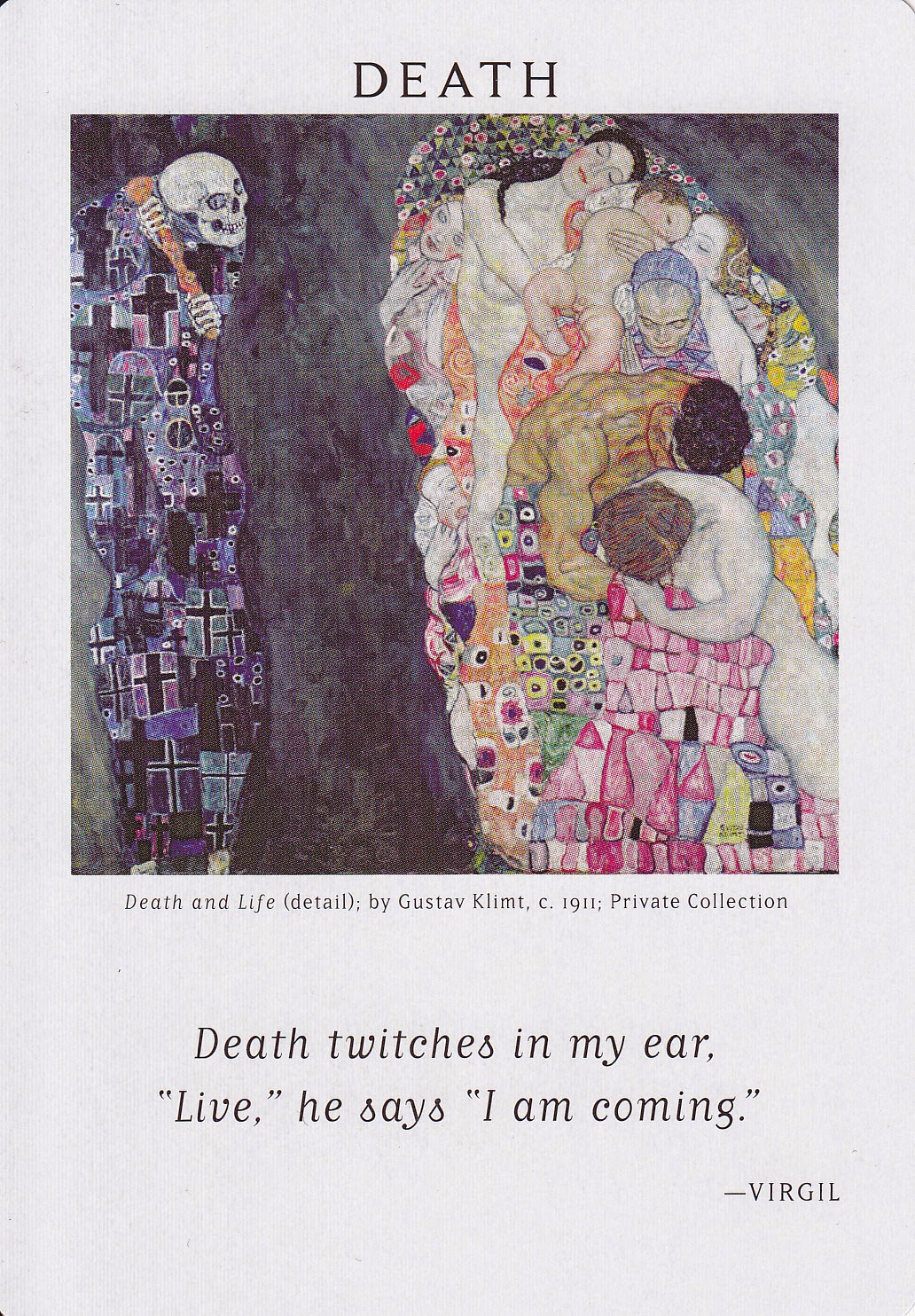 The Elora Tarot is a collaborative deck from southwestern Ontario with a colourful Fool-like Death card done in collage style. I like its panoramic, almost 3-D, view. 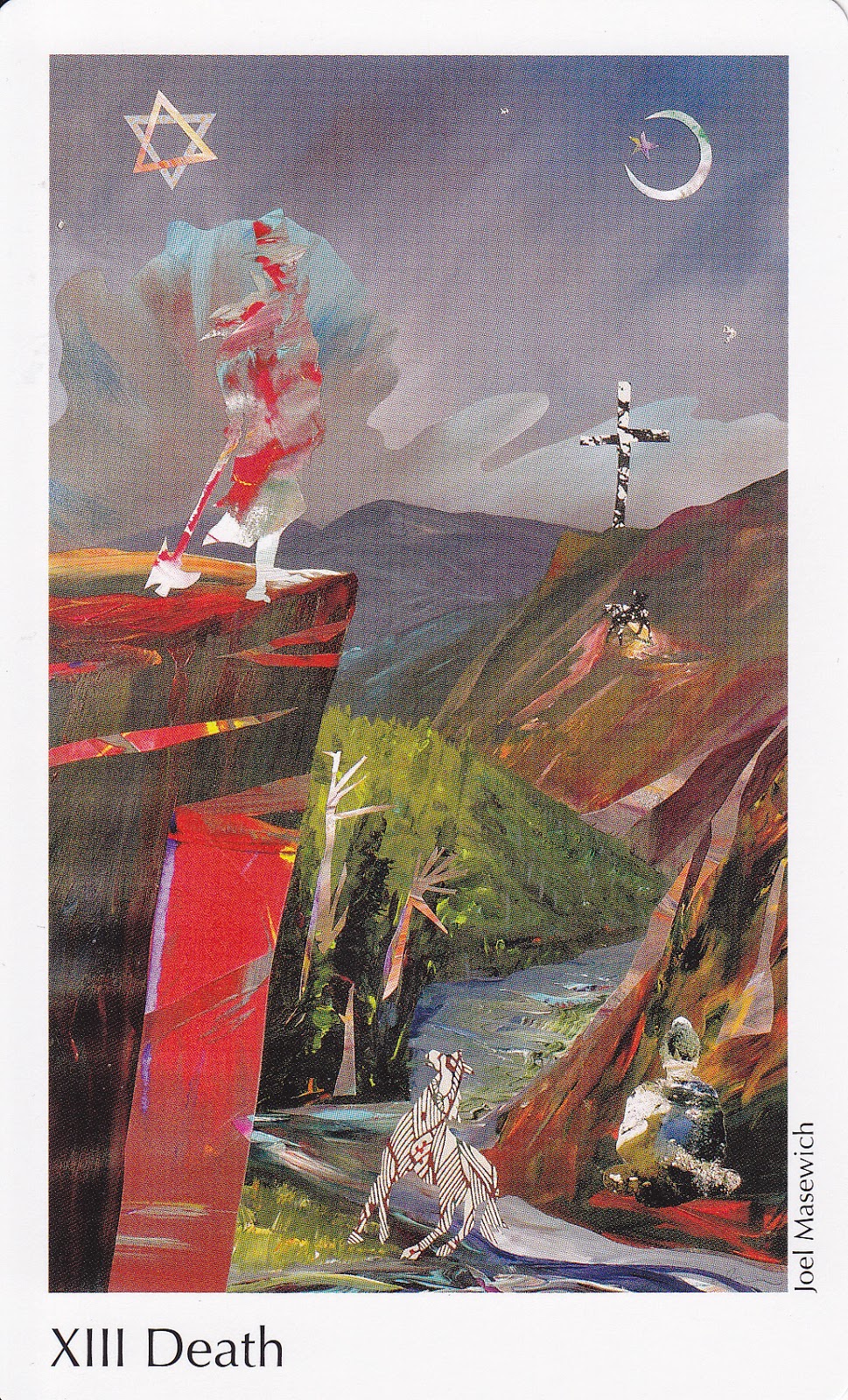 With flowing graceful lines, the Goddess Tarot presents the Japanese goddess, Ukemochi, as Transformation. This myth tells us that when she died, Ukemochi's body transformed into nourishment and aid for those she left behind. Her head became cows, her eyebrows silkworms. A most helpful Goddess indeed! 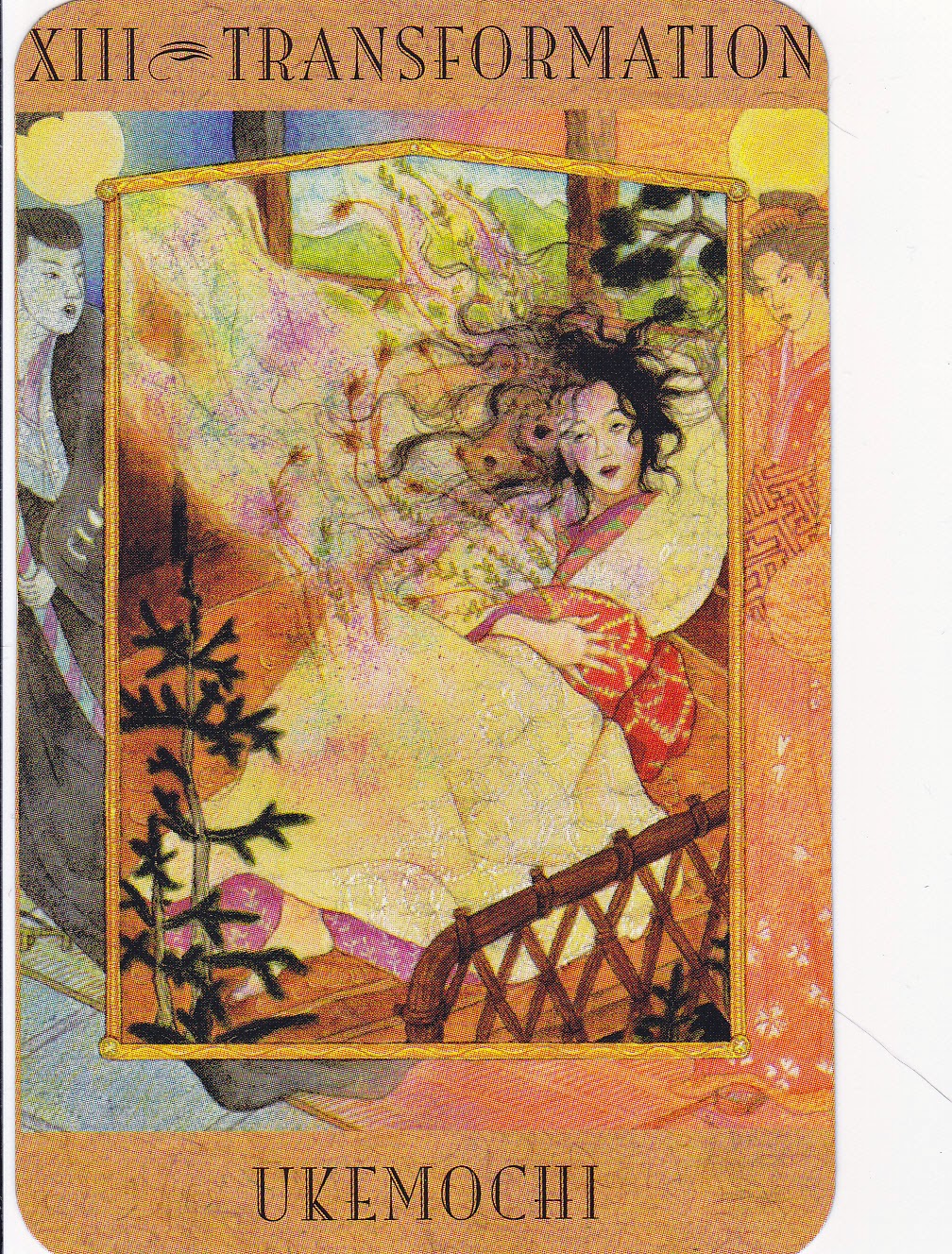 A ring of mourners pay tribute to a fallen songbird in the Victorian Fairy. I appreciate their respect for a creature not of their tribe. 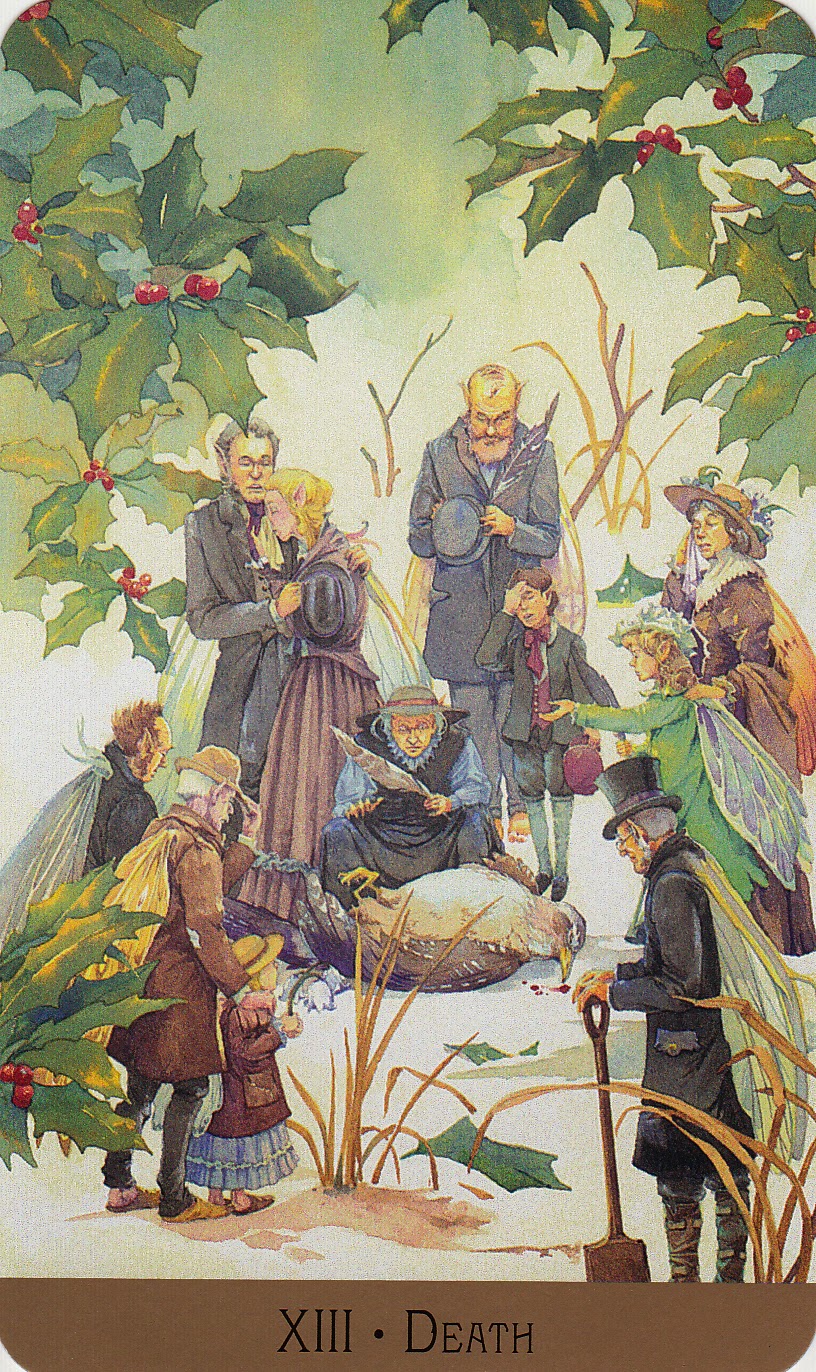 Ciro Marchetti has provided us with many gorgeous decks in his tarot-creating career. This Trump XIII is from the Legacy of the Divine. It is infused with rich colour, and offers the eye a multi-image feast. 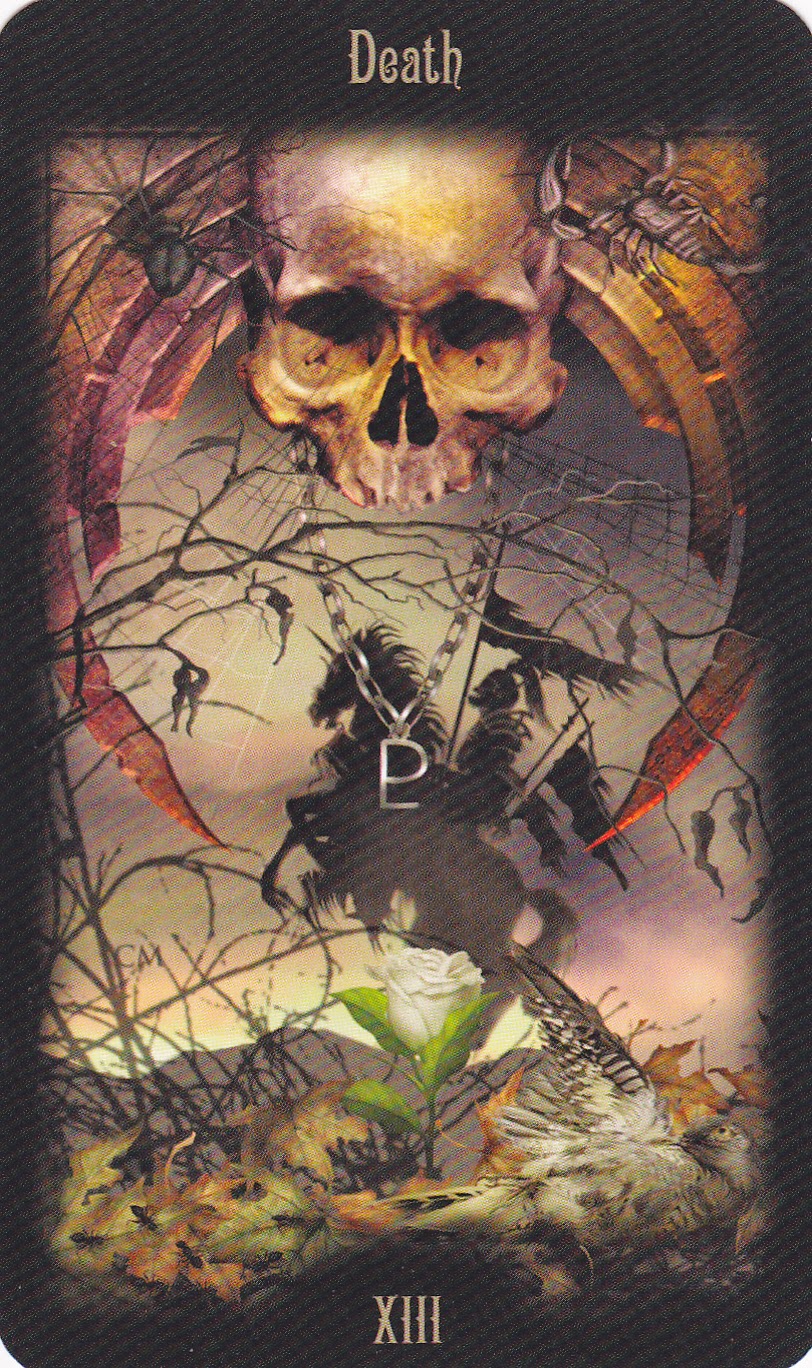 (Just realized that I'm posting this on the 13th, the number of the Death card. I like that.)
Posted by TeawomanTarot at 18:50

I’m in the process of organizing my READINGS button at the top of this page. Shouldn't take too long, right?
I do a lot of email readings for TABI, I can string words together, I own multitudinous decks, I have a creative mind, I’m reasonably conversant with the computer, I’m cheerful and friendly, and there’s Paypal.

How hard can this be?


Which brings me to the 7 of Cups.
The card about too many choices getting in the way of one's ability to choose.
Unrealistic expectations. Daydreaming. Not getting much done. 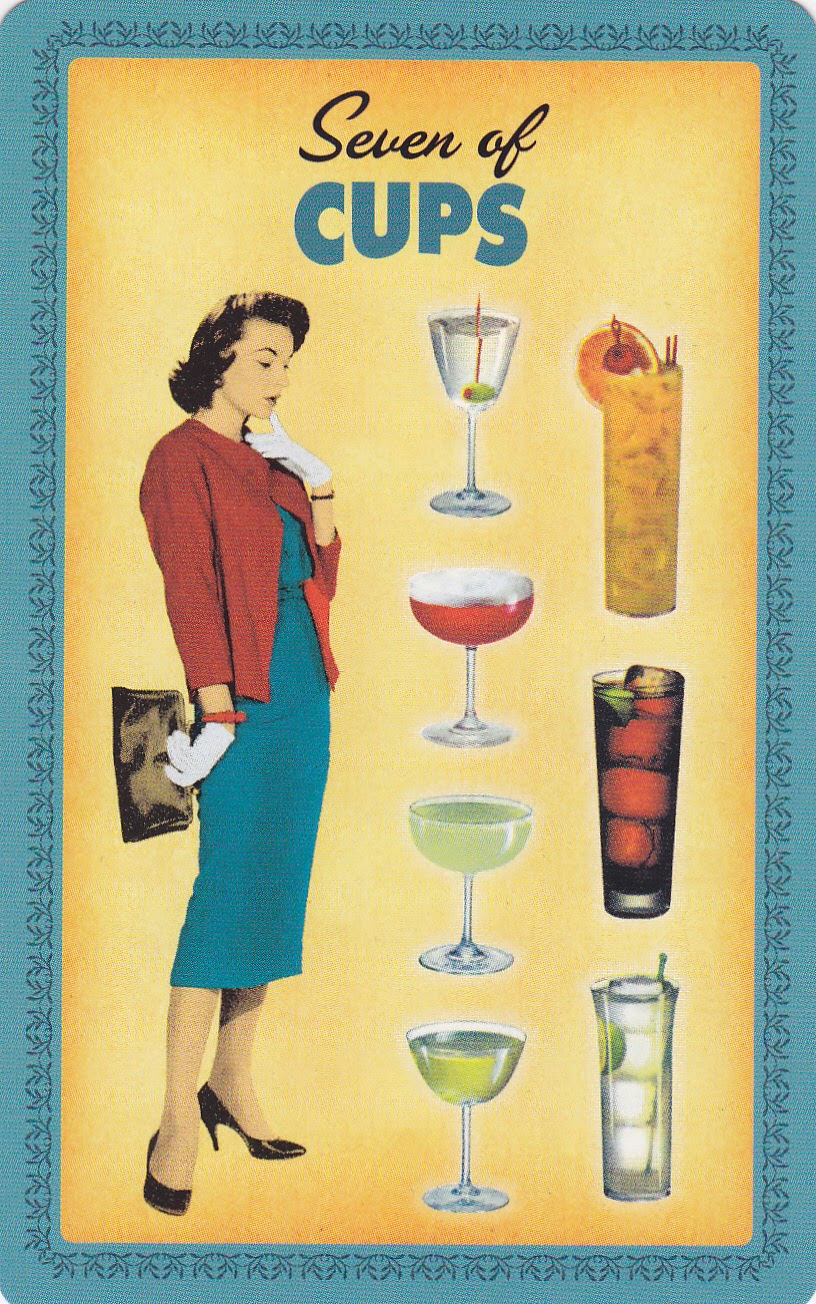 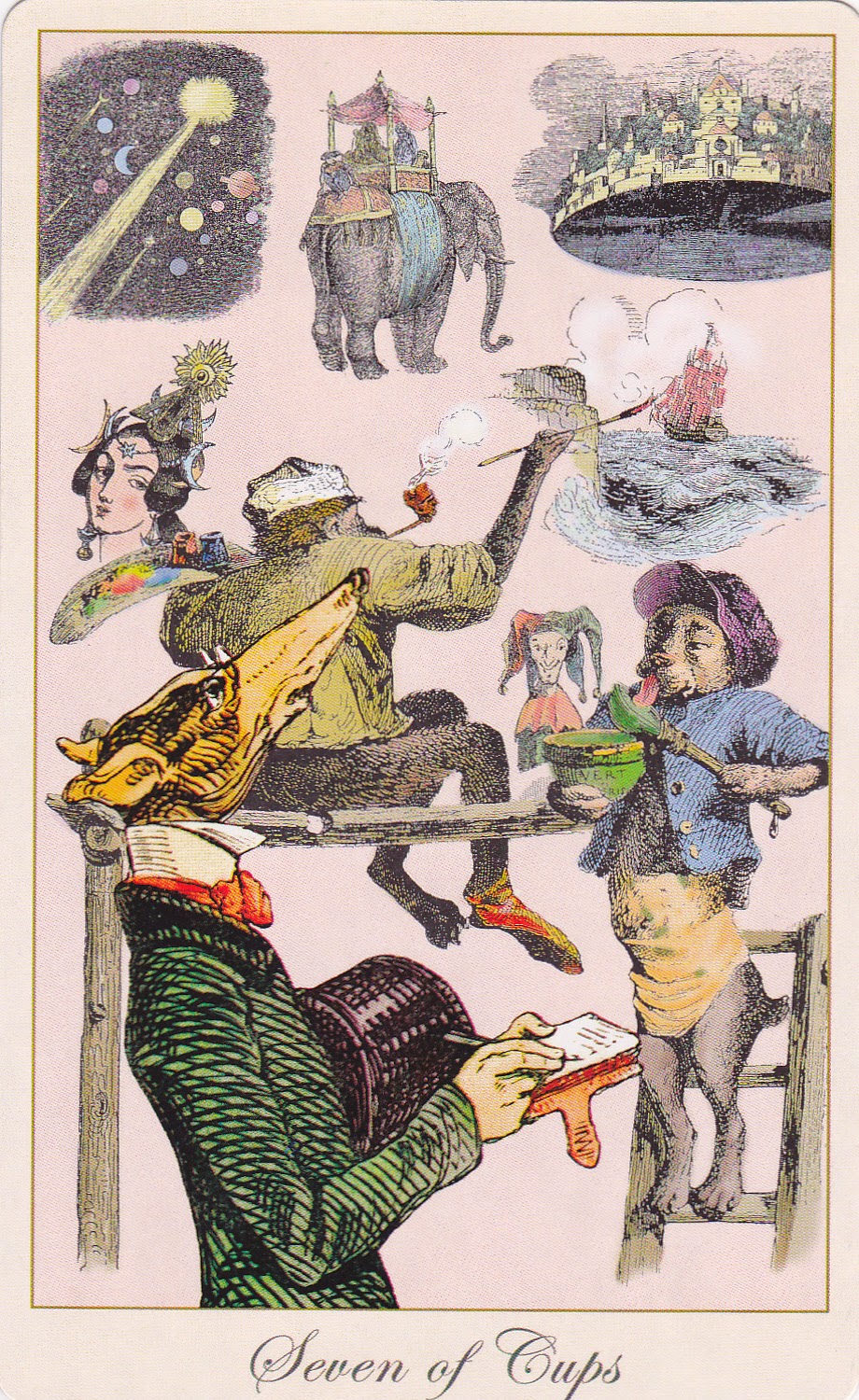 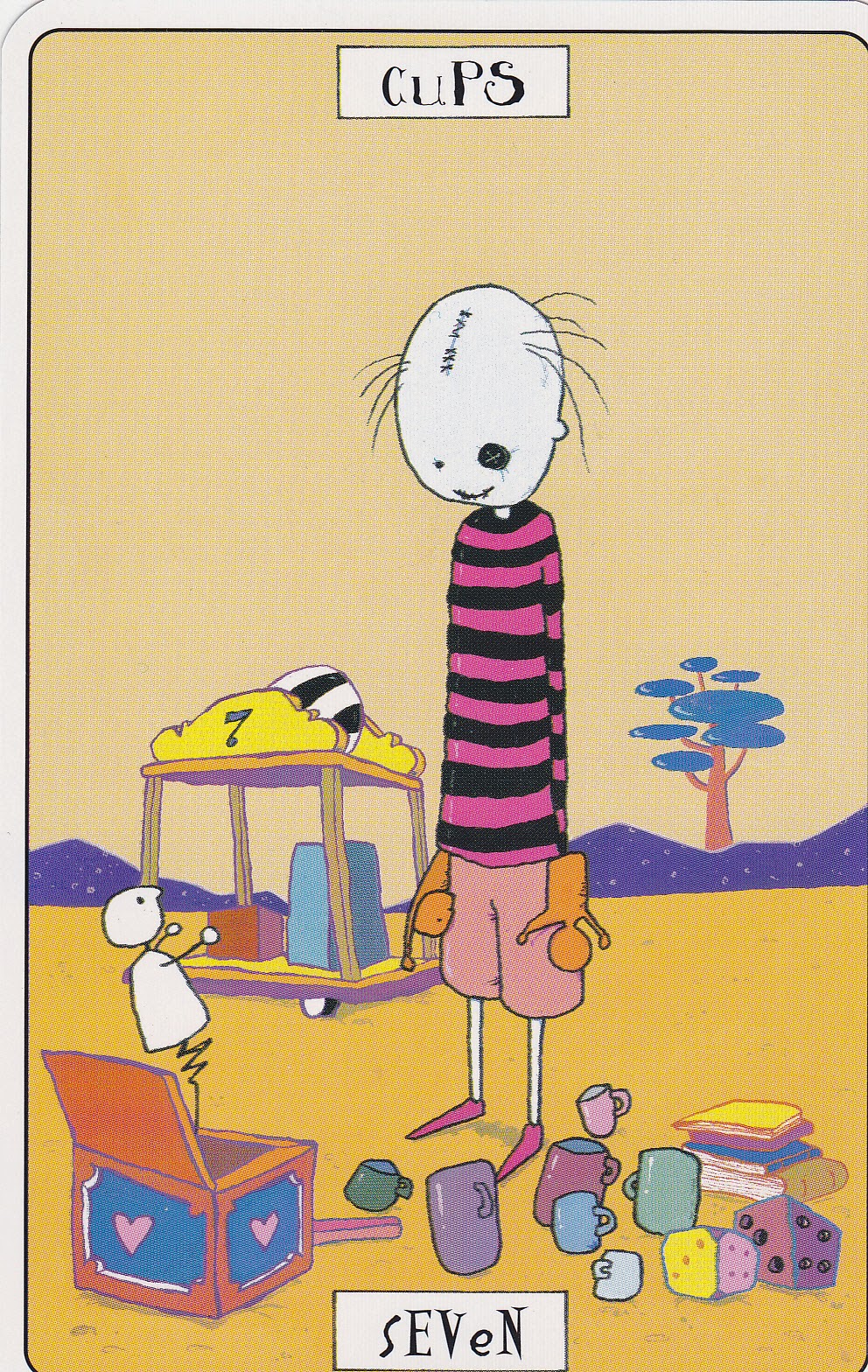 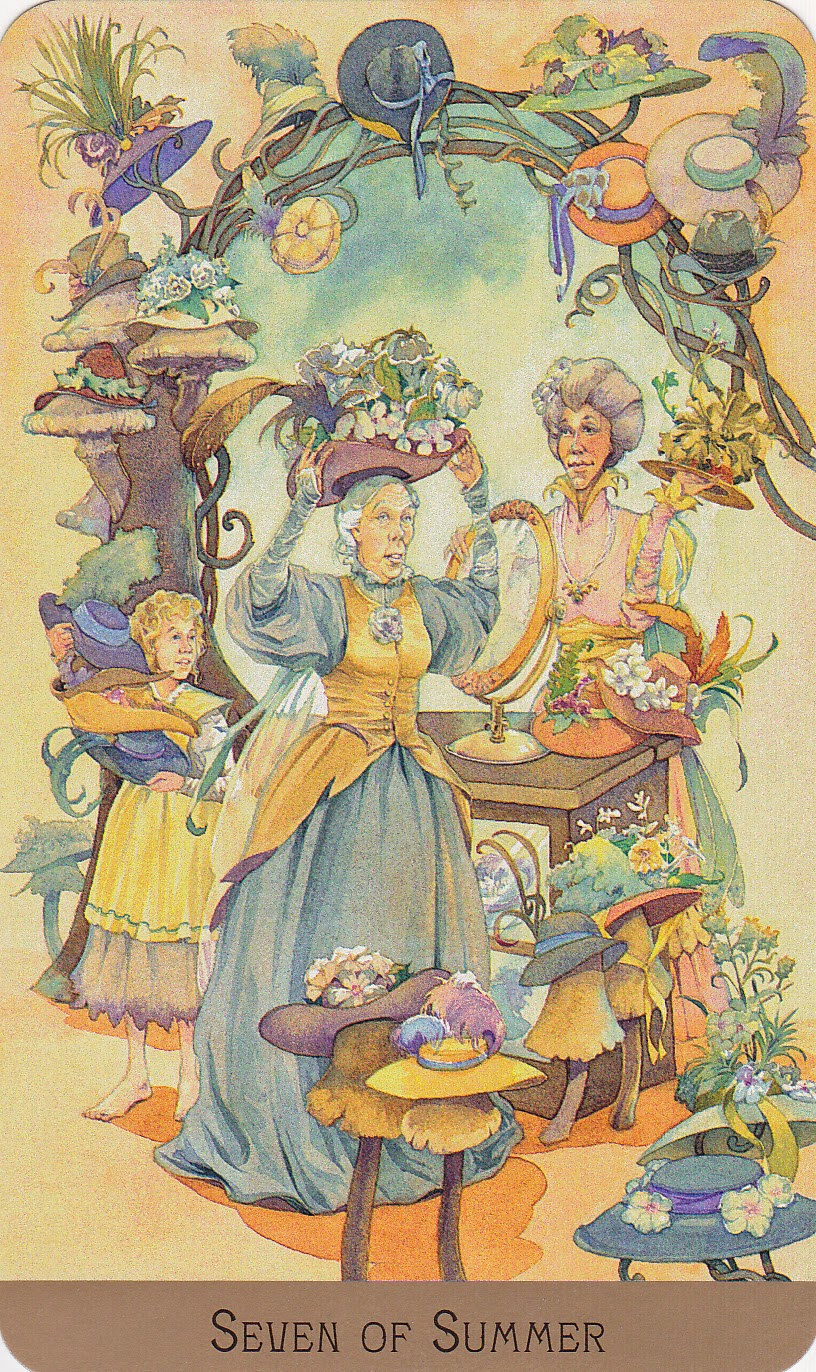 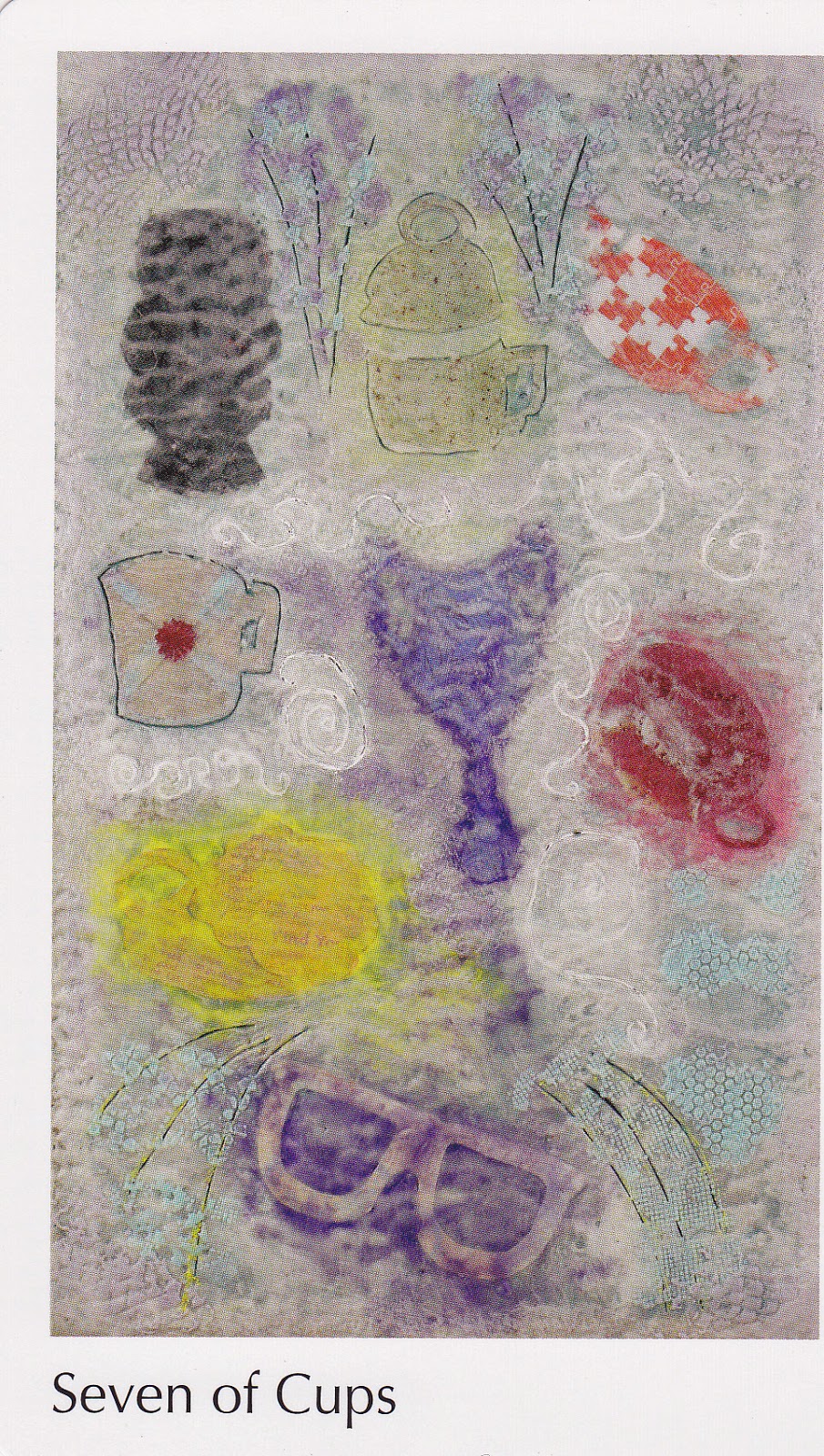 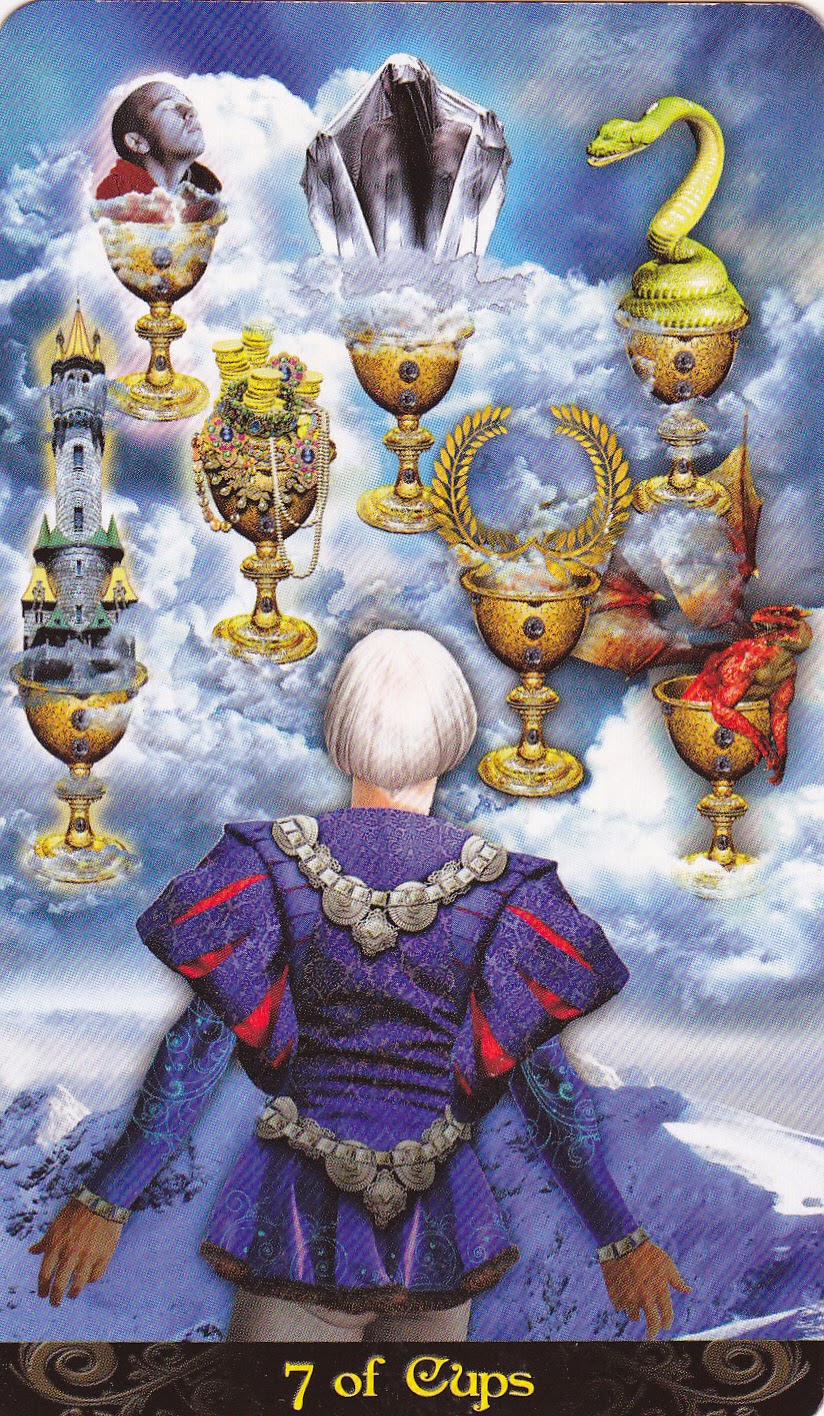 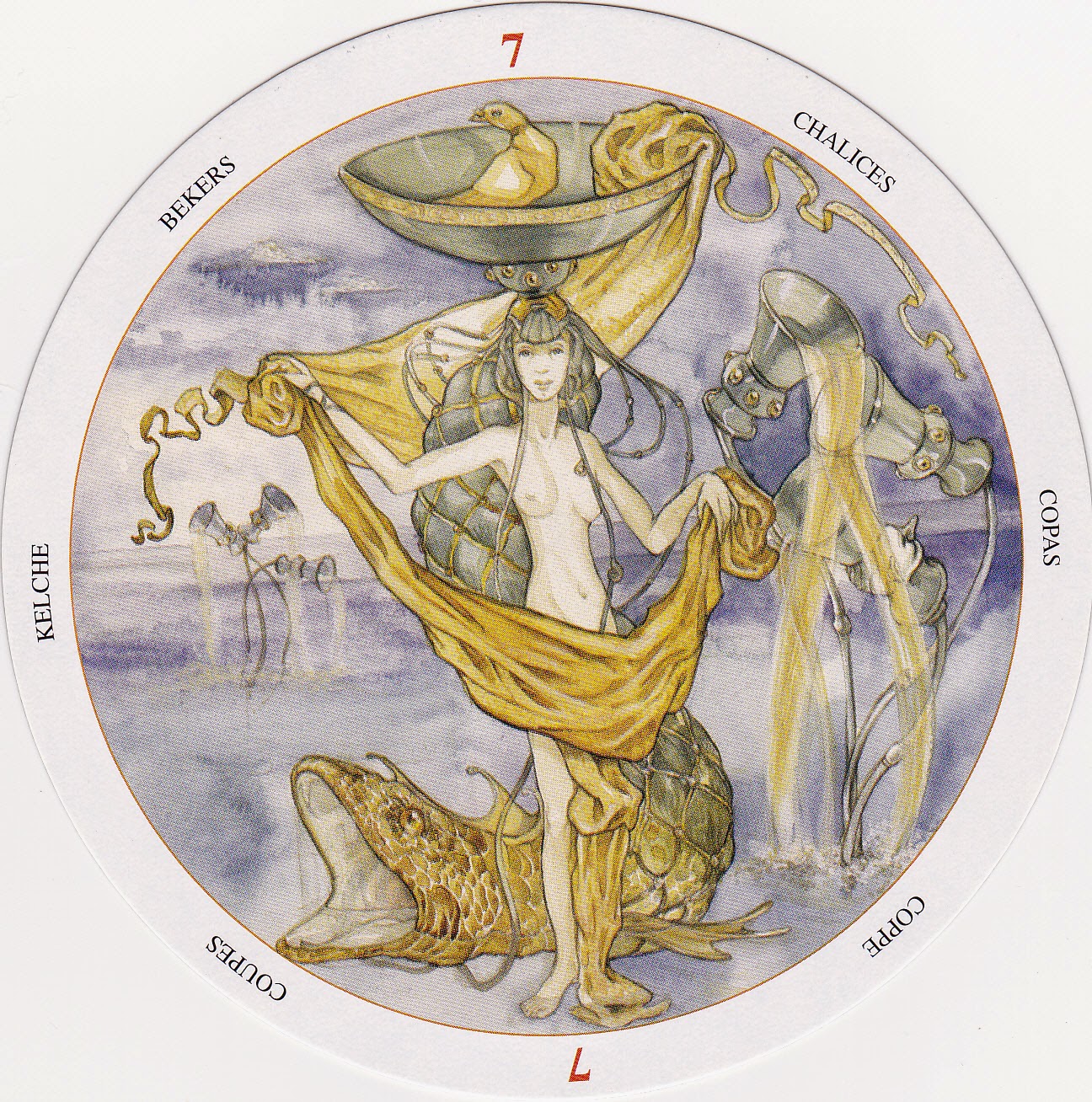 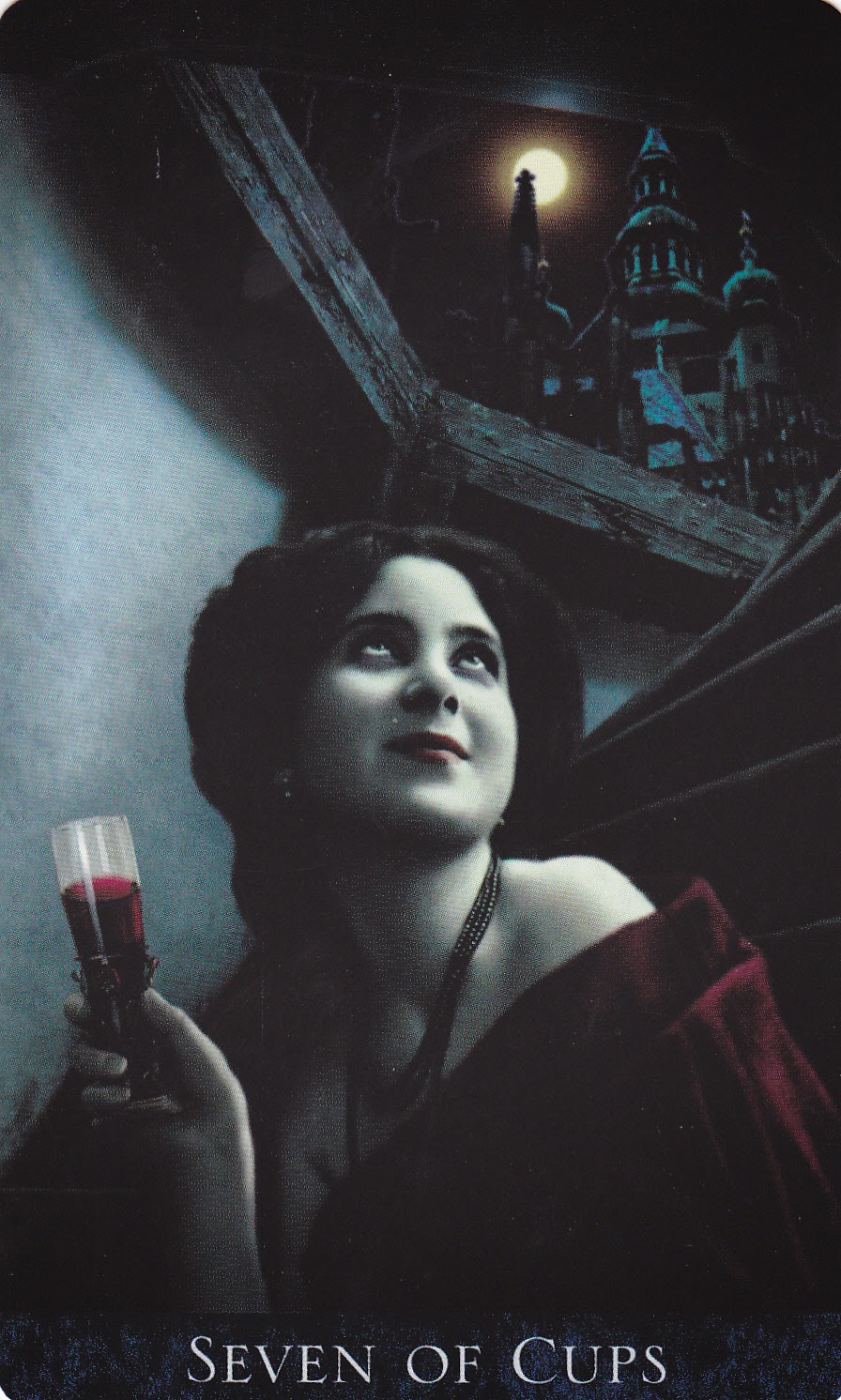 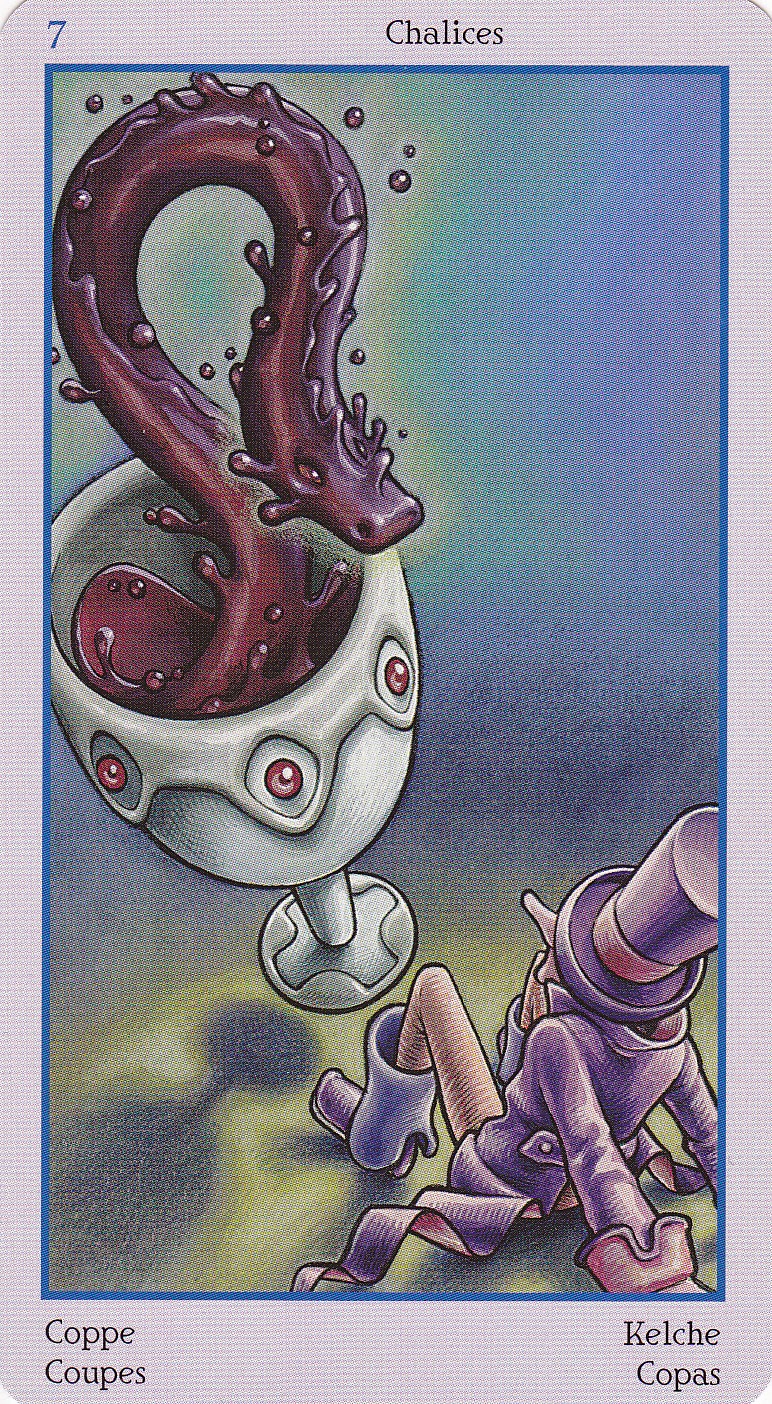 SEE WHAT
I
MEAN?

It's exhausting.
Time for
a glass
of wine.