Penny for your thoughts

On May 4, 2012, the last penny rolled out of the Royal Canadian Mint, dismissed as costing more than it's worth after 155 years of loyal service. 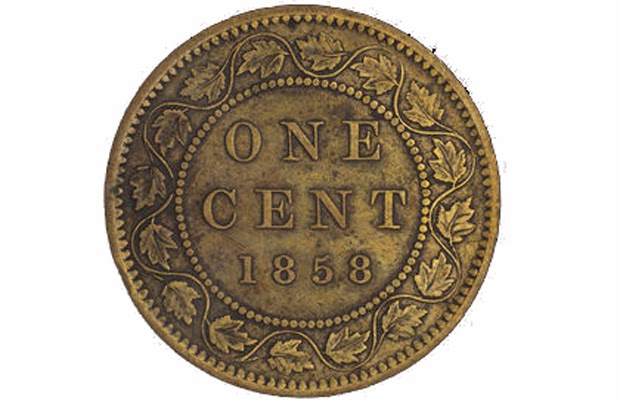 As new generations enter the scene, expressions like penny for your thoughts, a penny saved is a penny earned, penny-wise pound-foolish, putting in your two-cents worth, being penniless, Pennies from Heaven, and even Yeats' poem Brown Penny will become shoulder shrugs and whatevers to kids of the future.
(Lest you get the false impression that I'm poetically literate, I'll confess that the only reason I know about this poem is because it's recited so juicily by Christopher Plummer in Must Love Dogs.)
The penny will join the ranks of cars that need a crank to get started, ice boxes, home delivery of milk and bread, kids going out to play all day and not checking in until the street lights come on, black&white TVs, dial phones, 35 mm slides, VHS tape, and last but not least, penny candy.

In honour of the penny, I offered four of my most trusted decks a penny for your thoughts.

I shuffled until one card jumped out or stuck its head up, and here's what they said (in alphabetical order so as not to show any unfair preference for one deck over the other!). 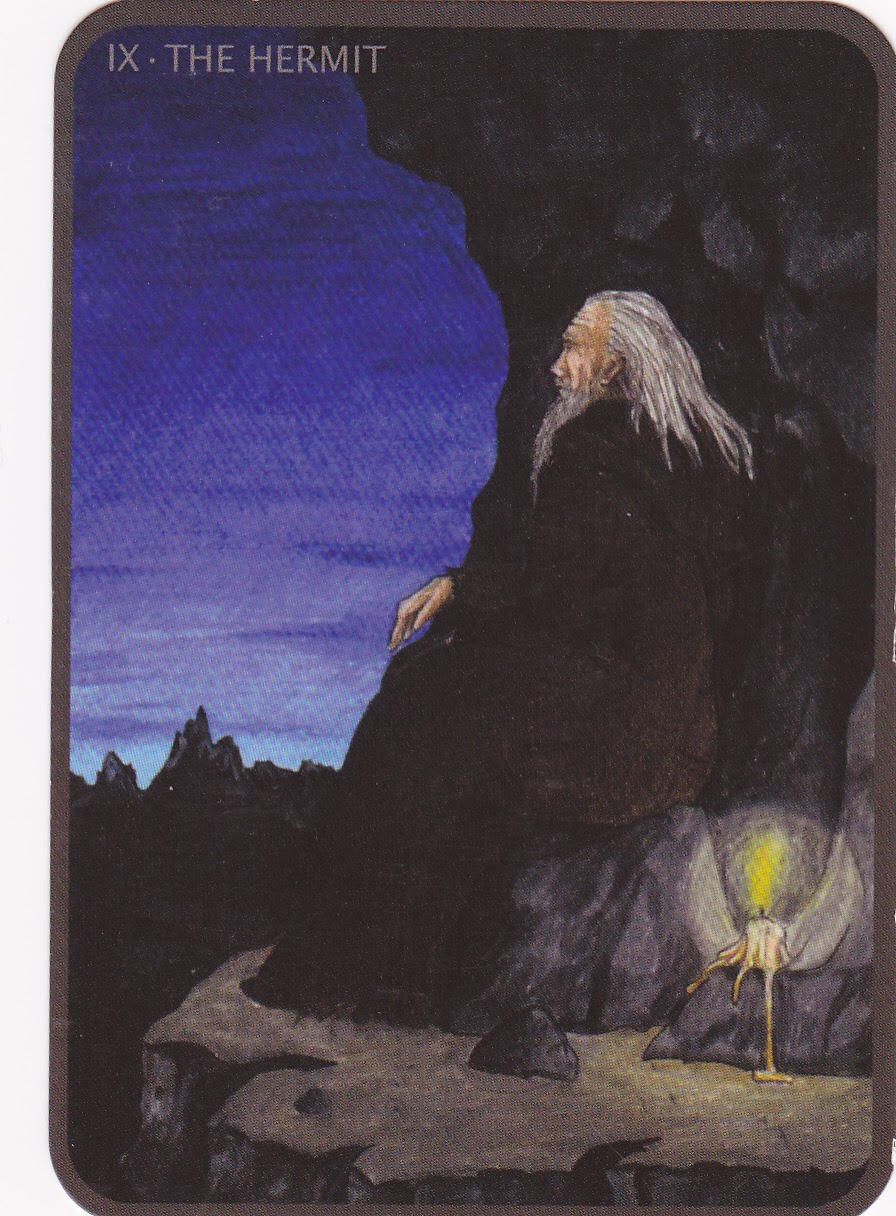 Anna K brought up IX THE HERMIT (I love this card!)
I'm going to take this as a suggestion to cocoon on this slightly snowy Saturday! No need to get all sociable. Partake of a pleasant mix of reading, crocheting, classical music, tarot explorations, maybe some introspective musings on goals for 2014, and don't forget to look out the window at the tranquil winter view. 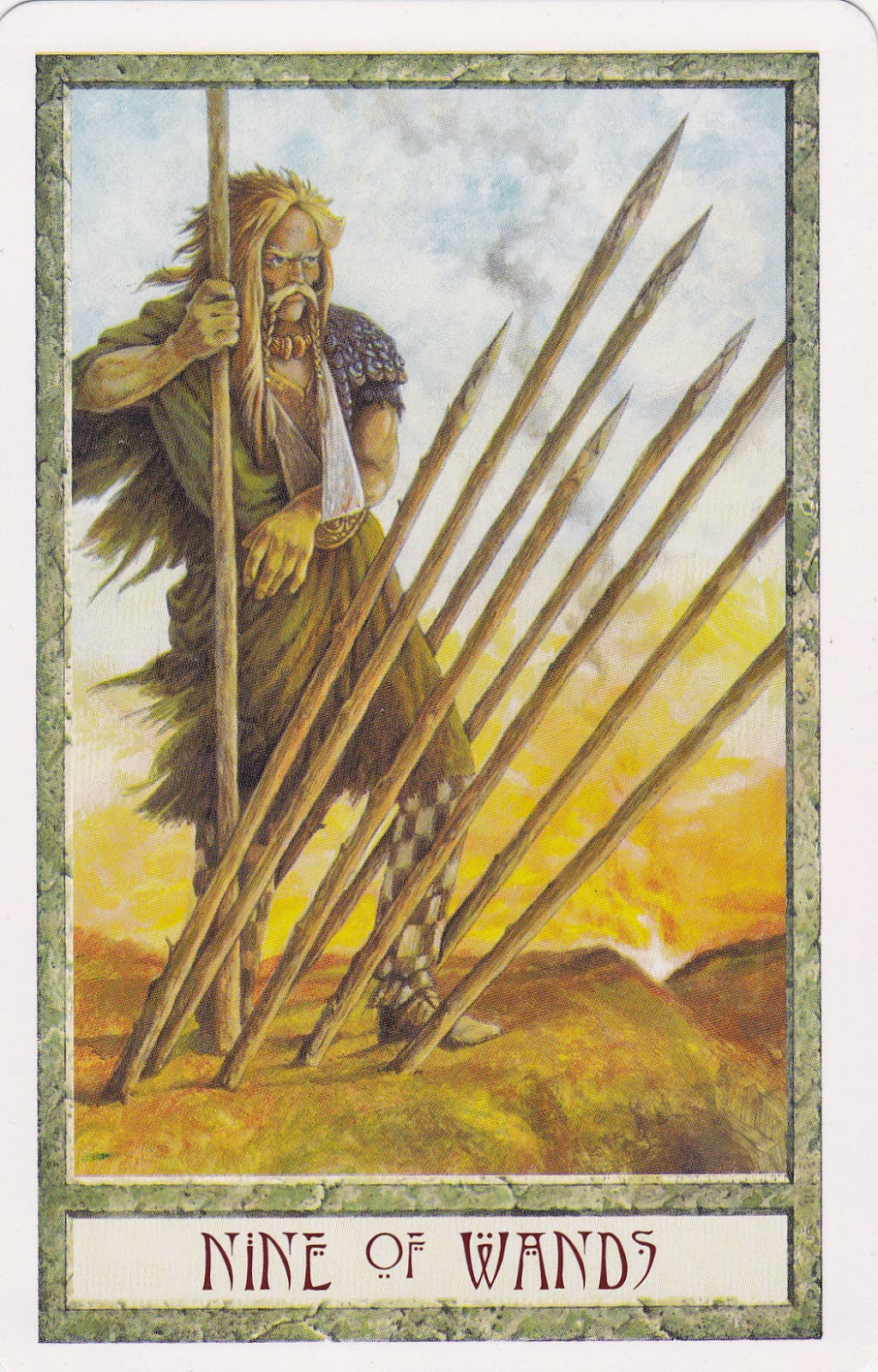 The Druidcraft offered up the NINE OF WANDS (yikes!)
So Druids, I guess you'd like to introduce a little strife into my day. Hmm.
Wounded but still standing, wary and not yet letting down one's guard. This is taking me straight to a recent experience I had reading online, where the querent was not at all happy with my take on the question and hence declared me "inaccurate and unhelpful". I was wounded, no doubt about it. Mind you, since my readings are never intended to be predictive, and I say so at the outset, I knew in my heart of hearts that I can't be accurately accused of being inaccurate. However, it stung.
So for the next reading I felt a bit like this man: defensive, careful, on the lookout, battle-scarred.
So, NINE OF WANDS, I'm taking this as your reminder that I survived the experience and learned from it.
I'm a tarot warrior! 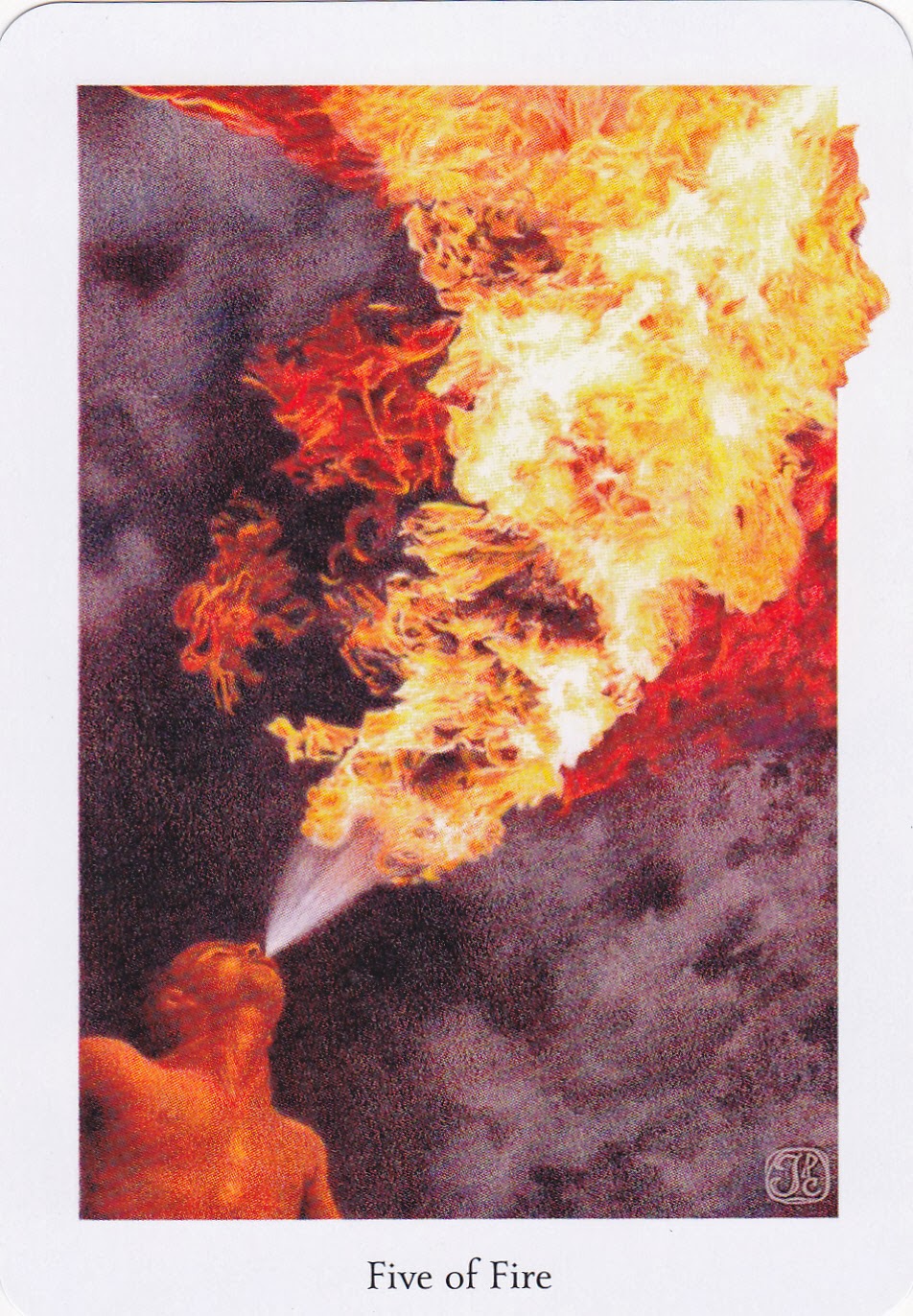 The Gaian ejected this card onto the floor: FIVE OF FIRE (another Fire card - good grief!)
My gentle Gaian has me breathing fire today! Well...
Do I need to let off some steam today? Release some wild notions that are too hot to handle? Am I more upset about the loss of the penny than I realized? Would this be a good day to write a blistering blog post about things I'm really hot-under-the-collar about?
Maybe I'll fire up the oven and bake a batch of spicy gingersnaps! 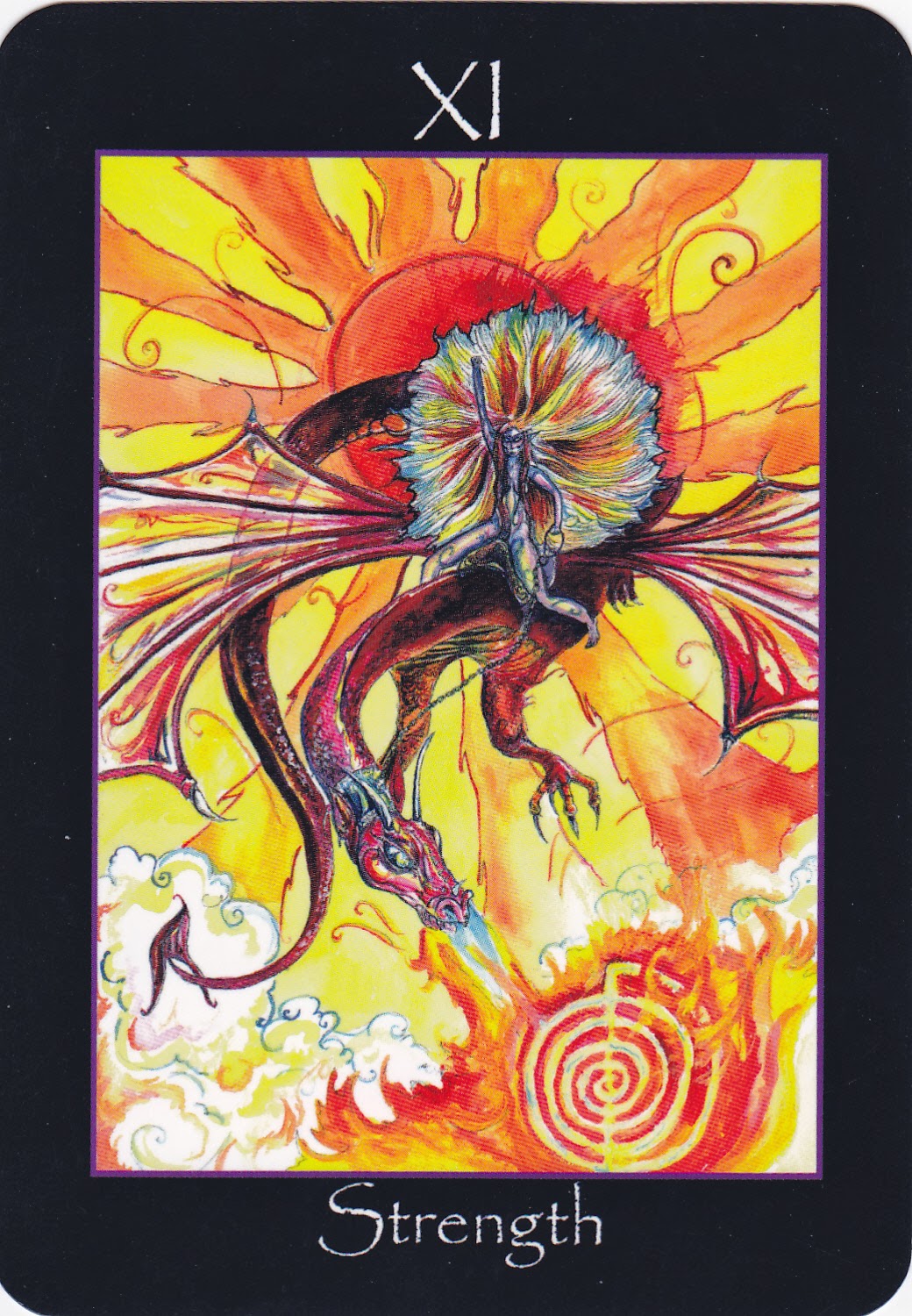 The Tarot of the Sidhe shot up XI STRENGTH, a fire-breathing dragon! (Is it time to turn down the thermostat?)
I can usually count on the Sidhe not to pussyfoot around; today is no exception.
The Sidhe astride the dragon seems surrounded by cool blue, so she won't catch fire from all the flames nearby. She's keeping a cool head while all around her is burning. She's not losing her cool because that might be dangerous.
This is a lovely depiction of hot/cold, within/without, inner cool/outer fire, facing the demon within with gentle courage.
As to how it relates to my snow-clad Saturday? I don't know yet, but the day is young.

Thank you, decks, for offering up your thoughts today!
Posted by TeawomanTarot at 17:10

You should never say "always"

This tiny title contains three of my most disliked words: should, never, always. Especially should.
That REALLY raises my hackles!

A book or article about learning tarot (or anything else, for that matter) that tells me I
should do this, or should never or should always do that is OUT! Goodbye. Done.
I hope I'm not being too wishy-washy about this.


Granted, there are times when never is appropriate.
Never sell your body parts while you're still using them.
Never jump off a high cliff unless there's a really big pillow at the bottom.
Never arm wrestle a gorilla.

Ditto always.
Always look before crossing the street.
Always check the sauce for dead mice before serving it to guests. (This is not an original idea of mine;
I stole it from Anne of Green Gables.) 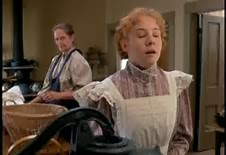 And even should has its uses.
With an early start, they should be there by noon.
If you should ever find yourself in need of help, call 911.
Should your Hollandaise curdle...

So if I don't want to say "should" in a bossy way, what should (ha!) I replace it with?
Well, there's you might like to... and perhaps try...
Or I encourage you to... and it might be helpful to...
Maybe steer clear of... or I prefer not to, but that's just me.
How about There's no one right way to do this; choose what feels most comfortable for you.

So I guess it boils down to this:
there are many different teaching styles


and a variety of learning styles.
And we all fit in somewhere!

Testing, Testing: getting cozy for 2014 with the Victorian Fairy

When my daughter was about eight years old we were reading Jill Barklem's little books, one for each season. We also bought two tea mugs and a small plate (Royal Doulton - yikes!) so we could have tea and cookies and get cozy with the residents of Brambly Hedge. I loved those times together, and really wanted to live in a place that looked liked Jill's artwork! 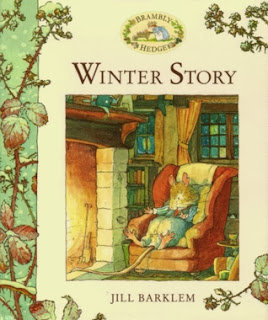 Yesterday I got serious with my new Victorian Fairy Tarot deck and companion book by Lunaea Weatherstone. The beautiful little tome is a treasure trove of Victorian poetic references and the language of flowers. And guess what? Not only do I love the deck and its seasonal approach to the Minors, but I'm also enamoured of the art which reminds me so much of Brambly Hedge! Minus the mice and plus the fairies. 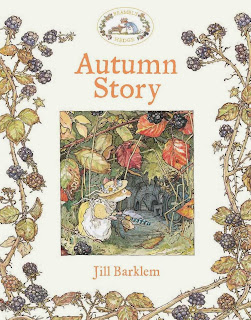 The Autumn (Pentacles, Earth) scenes in the Victorian Fairy deck are particularly cozy.
Gathering for the cold days ahead, a community storing away together. 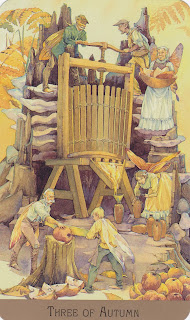 Preserving, drying, sharing, passing on how-tos from one generation to another. 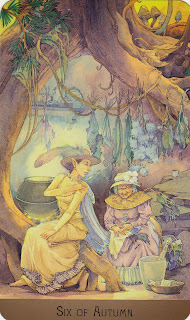 I'm always sad when December is over; it's my favourite month of the year. Come January I need a bit of a kick start to move forward. This year the task falls to the Victorian Fairy deck; you ready, little people? I'm shuffling and waiting for cards to stick their heads up out of the deck. I need volunteers to answer my questions!

Well, Victorian fairies, what kind of a deck are you? Eight of Autumn (Earth) steps up. Let's see... 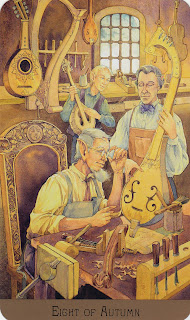 You'll work hard but cheerfully and cooperatively. I see patience here, and attention to detail.
(If this is sounding like the Sorting Hat in Harry Potter, I'm OK with that.)
You have impeccable taste in musical instruments. You have much experience but are willing to train your workers (aka me). You support a cluttered but creative mind, and respect taking care with one's endeavours.

What are you really good at? Ah, Trump I, the Conjurer (Magician) 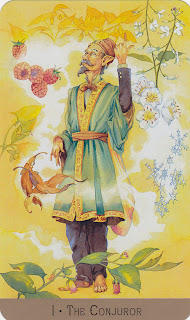 You'll help me to conjure up great ideas for my clients; the magic of your images will inspire me to think outside of the box. Your magic is rooted in real life; it's not high-falutin'.
You're a breath of fresh air.

Is there anything you're not very good at? Anyone want to answer this one? VIII Fortitude (Strength) 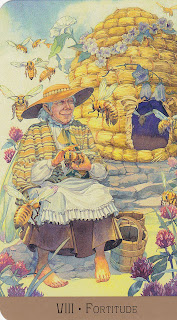 Well, you're definitely sweet, I can see that. Not into brute strength? Forcing your opinions on others not your forte? You're better at catching flying ideas with honey than vinegar? Those are all good things! I think we're going to get along famously, Victorian Fairies!
Posted by TeawomanTarot at 19:44