I'm deeply and happily immersed right now in James Wells' course on Tarot Counselling for Self & Others. Last week's activity during the live call was to construct a spread using a tarot card as the inspiration.

Since we're coming up to Halloween, I chose my All Hallows deck for the exercise and drew... 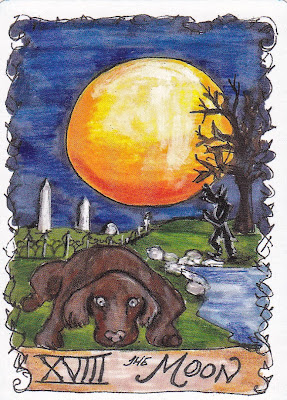 How perfect!
I picked out the following elements and used their place in the image as the spread positions.

2. the jagged tree marring the moon

1. Who or what is mesmerizing you?
2. What persistent reality is intruding?
3. What is grounding you?
4. What clarity do you feel flowing from this?

That was SO MUCH FUN to build; I drew another card! 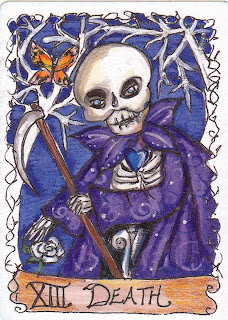 Ideal!
This time three elements stood out for me.

1. the skull with blue eyes

1. What conclusion or ending is staring you in the face?
2. What bright new life might emerge from this ending?
3. What tool will help you bring this to a close?

Sneaking Around with the Seven of Swords

Sneaking around starts early.
Small potatoes. No big deal. Until it escalates later in life. 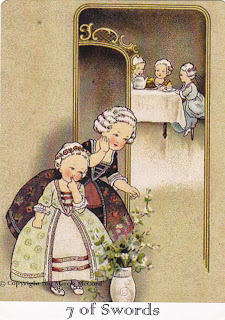 In high school everybody does a lot of sneaking around. Let's face it - it's unavoidable. Your parents have certain expectations, and when they don't match your plans, you have to lie. You say you're going to Carolyn's when in fact you're down by the river parking with Tom. Teenage stuff. Mostly harmless.

My school was all girls, Catholic, run with rosary beads and rulers by the nuns. Our boyfriends went to the Catholic all boys' school presided over by priests. It was a good arrangement, and meant that we could talk about boys all we wanted without them overhearing.

One particularly dramatic friend in my grade 12 class took dating deception to a whole new level. She ran off with one of the teacher-priests from the boys' school. It was a huge scandal. Really cool.
I never did find out if she left by way of the old rope-out-the-window trick like this young woman from the Vanessa Tarot or by more conventional means. 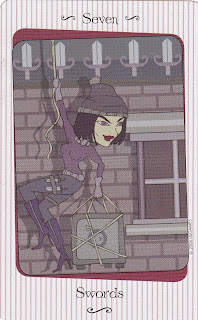 So what happens to the Seven of Swords persona when it blooms into full-fledged adult behaviour?

Of course there are degrees of Seven of Swords-ness, ranging from:
occasional not-very-nice pilfering of people's ideas or possessions as seen in the Tarot Illuminati 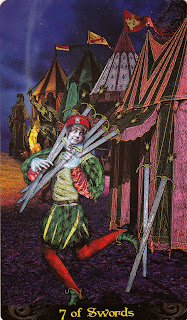 to the endless self-serving plotting of the thoroughly unlikeable Mrs. Norris
from Jane Austen's Mansfield Park﻿ 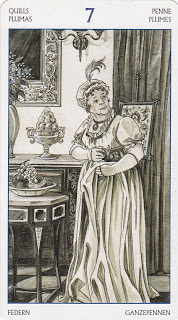 all the way to the evil demon intruder with glowing eyes in the Dark Grimoire.
Sleeper, beware! 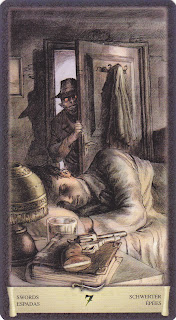 So the next time I'm tempted to syphon, pilfer, filch, or otherwise behave in a Seven-of-Swords-ly manner, I'm going to remember what a slippery slope it is from snitching a dollop of frosting to becoming an orange-eyed demon.

Fall is my favourite season!
I love the crisper air after summer's humidity, how sometimes in late afternoon the crowns of the trees are limned by sun against slate grey clouds.
Honeycrisp apples, extra spicy pumpkin pie, piles of squash on the farm stands.
How the leaves on my lythrum plant turn wine red which I wouldn't know if I were a proper gardener and pruned it down when the blooms were done.
The smell of burning -

Blah blah blah.
You humans are all about the non-essential parts of Thanksgiving. Nice little table arrangements with dried flowers. Aaaahhh the fresh air, the beautiful leaves, my grandmother's recipe for apple crisp...
You're living in a dream world, people! 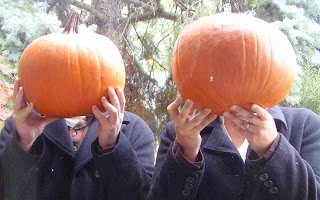 The real deal is that the mean season is coming. No more food lying around in vegetable gardens. No berries on the yew bushes. Empty seed pods. Freezing our butts off. We squirrels have to be prepared.

So here's what I do with your Thanksgiving decorations. 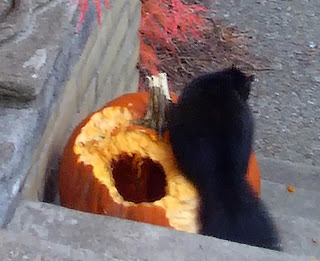 I've been meaning to talk to you about last year's pumpkins...

﻿
Yeah, they were kinda tough. Apology accepted.
These new ones you've put out look nice and tender. Easier on the old incisors.
Gotta skitter. Happy Thanksgiving! 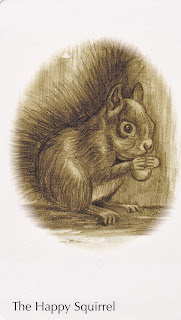