Hanging around with the Hanged Man

Right now I'm hanging around waiting for a response to my most recent email reading for TABI. And for notification from the real estate agent that an offer has come in. And for my house to clean itself.
The first two are at least possible. The third is as likely as these blobs of water continuing to defy gravity without benefit of a camera's frozen pixels.
﻿﻿

I like the Hanged Man, Trump XII. It gives permission to stop doing things and just look around for awhile. Maybe gain a new perspective on things. Activity suspended. How will you use this time?


Dealing with an enforced period of inactivity in a relaxed and open state is probably the most fruitful way to spend your time. Like this guy from the Druidcraft Tarot, who is letting it all hang out, so to speak! And he's so into his upside-down experience that he's muzzled himself with greenery to make sure he doesn't just natter away the time. Total surrender! This man is going to learn something here.


But what if the upended person is too ticked off to do anything but pout and fret while he's dangling?

Then you get someone like this grumpy dude from the Anna K Tarot. He's going to keep that sour face until they let him down. That'll show 'em. No pondering new perspectives for him, thank you very much! 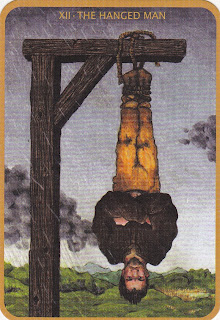 Sometimes the atmosphere is ripe for reflection! A full moon reflecting on the water, an owl encouraging wise thoughts, the empty tower with no one around but you. The scene just begs for going within, allowing your inner wisdom to shine through, coaxing insights too shy to emerge by day. Some dreamy new ideas are possible here in the Bohemian Gothic Tarot! 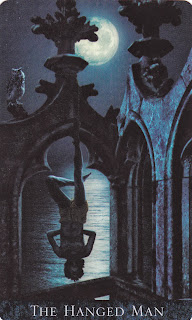 I never liked The Tree in the Gaian Tarot. She looked like she'd been stretched. It didn't appeal to me. Until I thought: stretching your mind, increasing its elasticity, pulling your perceptions like taffy. HA! She's turning her thoughts around as the season takes a turn into Fall.
And look at the tilted horizon in this card; more practice at looking at the world in fresh and unfamiliar ways! 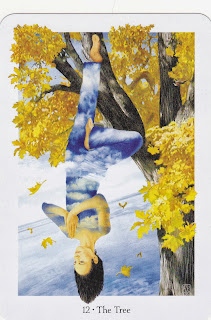 Sometimes your life feels too tight, too constricted. You can't breathe. If you don't cut loose RIGHT NOW you're going to explode! But maybe if you hang in there just a wee bit more, you'll uncover something worth digging for: a pearl of wisdom. And then you can surface with your treasure like this diver in the Tarot of the Journey to the Orient! 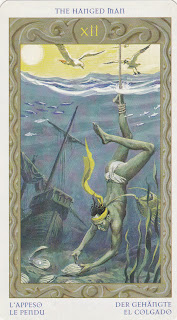 There's no one hanging in The Wizard's Tarot. That's odd. My eye is drawn to the crooked picture on the wall. Aha!
An upside-down version of the card is framed and hanging. And within the frame is a crooked upside-down version of the...you get the idea. Theoretically endless images of the Hanged Man who has turned his life around. If he forgets that another upending might be necessary, he has only to glance up and be reminded. Life is topsy-turvy on a regular basis! 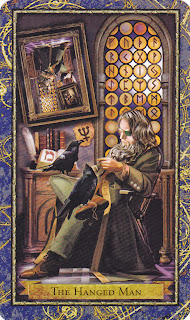 For sheer comic relief we listen in on The Housewives Tarot as she sings "I'm gonna wash that man right outta my hair" and then hangs him out to dry. This husband might want to bring home flowers and candy tonight! 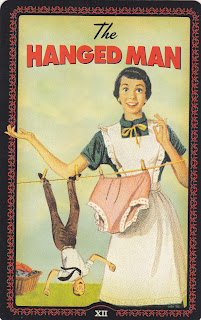 Spiels on Wheels, Part One

When I first thought about doing a post on tarot's Ten, the Wheel card, I figured ten wheels. Perfect. Except that in no time at all I was at thirteen entertaining wheels, and counting. The post was rapidly turning into a novel. How to sort them out? Joni Mitchell to the rescue.
"Moons and Junes and Ferris wheels..." from her 1969 hit, Both Sides Now.
Problem solved! I'll start with Ferris wheels. 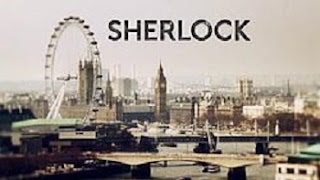 And now Budapest's Eye, on view for this summer only in lively Erzsébet Square. Picture taken by ME! during an unforgettable week in July. 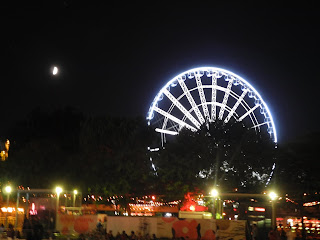 Time to turn the wheel over to tarot. The tough gritty Tarot of the Burroughs takes us on an occasionally seedy excursion through the Big Apple, and a spin on Coney Island's Wonder Wheel. On the right is a Wheel that's not quite Ferris; the rollicking Wheel of Fortune from the Anna K tarot. Sometimes you're up, sometimes you're in the mud, but you can always climb back on for another spin! 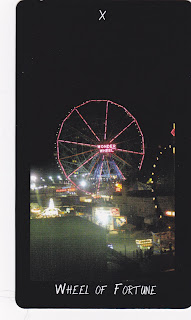 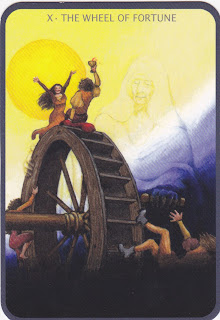 That's enough stomach-swooping for me!
Over to the merry-go-round and the Inner Child deck on the left, where we hop on with Alice in Wonderland and the Mad Hatter. On the right is a real-life carousel that lives in Edinburgh's Princess Street Gardens.
"And the painted ponies for up and down; we're captive on the carousel of time."
Joni again, from the Circle Game. 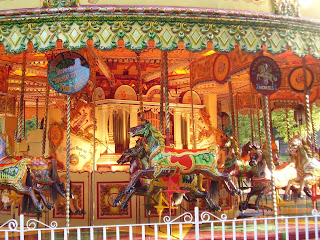 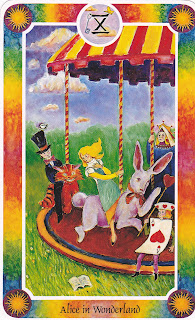 Wait a sec, please. I need one of those fresh-squeezed lemonades where all the sugar sinks to the bottom of the cup.
OK, over to the midway and the roulette wheel. First to the Housewives Tarot (L), where we ask June Cleaver to mind the kids while we high-heel-it off to the fairgrounds to gamble with the grocery money.
A bit of dark humour creeps in with the kooky spooky Halloween Tarot (R). Here's an alarmed carnival-goer tied to the Wheel, which is being turned by an elephant, who in turn is about to be given a turn by a mouse. Expect the unexpected! 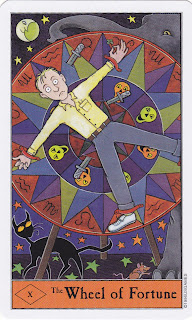 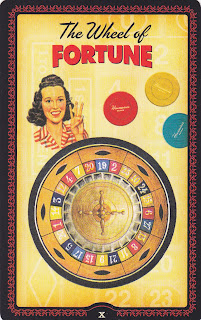 Grab some candy floss to go - we're leaving the carnival!
The somewhat odd but interesting Bruegel Tarot uses the child's game of hoop-and-stick. Images of comic-tragic masks and the letters F/A (felicità/duolo) depict happiness & pain following each other around the hoop. We're definitely out of the kid-stuff with this one. 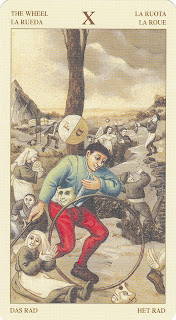 That's the first six Wheels. Now the last four: spirals and spinning wheels.
Here's the Budapest wheel again, next to the spiral on the Tarot of the Sidhe card backs.
Same purplish-white glow - I love it! 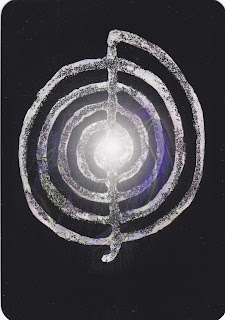 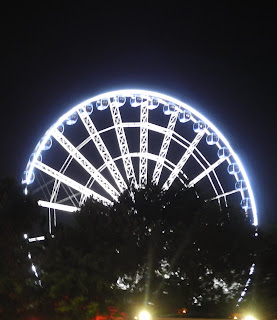 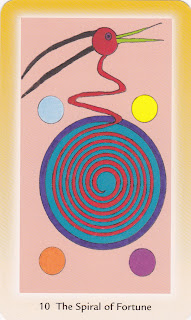 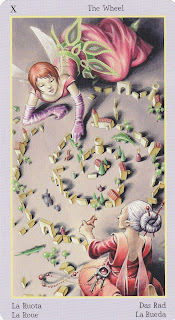 Right underneath the Sidhe glyph is Rachel Pollack's Spiral of Fortune, from her deck-unlike-any-other, the Shining Tribe. This endearing creature reminds me of the mulefa, the wheel riders in Philip Pullman's His Dark Materials trilogy. In this series of books, many different worlds co-exist simultaneously, much like in a Wheel of Fortune card where one person's world is up while at the same time
another's is having a downswing.
On the left, the sweet 'n feisty Fey Tarot turns the spiral into a gameboard. As one Fey adds a game piece to the spiral, the other player removes one. As the player in her autumn years exits the spiral of life, a younger Fey enters. The Wheel is always changing and yet remains the same.

The final two!
On the left we're attending "Mandrake Academy" in Corrine Kenner's richly imagined Wizards Tarot. The scene is the Guidance Counselor's office, where ghosts of past and future listen in while she helps us cope with the twists and turns of fate (as we twist and turn the wool into yarn).
On the right we see a cropped version (sorry, anti-croppers!) of the Wheel from the delicate Dreaming Way Tarot of Rome Choi. This young woman doesn't seem to be having much luck with the yarn on her spinning wheel. I hope it will soon come 'round right for her. 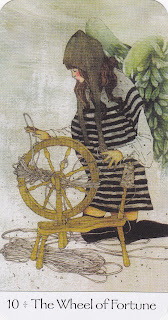 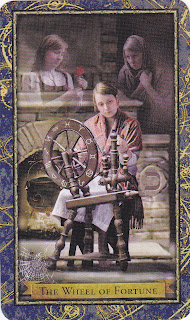 Ta-da! Ten Wheels of Fortune! But who will read them for us?
Over we go to The Baroque Bohemian Cats' Tarot, and the creative folks at Baba Studio. 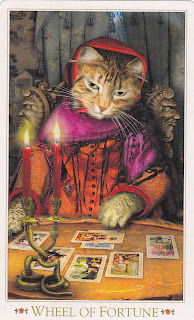