Troll Bridge Spread, with the Gaian and the Sidhe

I stole this spread from someone online (typical of sly troll behaviour) and am so sorry that I cannot credit it to anyone. Thank you, whoever you are! I hope you like what I'm doing with your spread.


1. Where you're standing
2. The troll guarding the bridge
3. What's on the other side﻿


I love trolls. Not the brutish one that ends up in the girls' bathroom at Hogwarts.
I prefer them ugly but cute. Less snot, more humour. 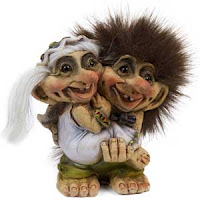 However, MY kind of troll may not be on duty at the bridge, so it could get nasty. Be wary!
In keeping with the combativeness of some trolls, I'm going to pit two decks against each other in this reading, and see what happens!
Will they end up pooling their resources? Will they agree to disagree?


In this corner, in white, we have the kindly Gaian Tarot.
And wearing black, the powerful Tarot of the Sidhe.
I'm shuffling the Gaian, dealing three cards and finding their matches in the Sidhe. Here goes!
Fight fair, decks! 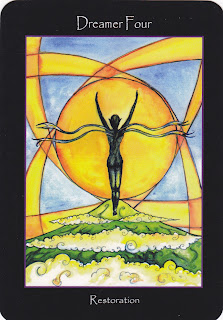 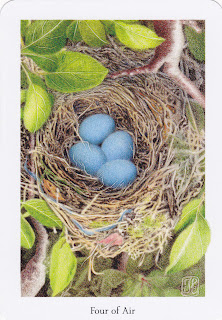 You're safe with the Gaian Four of Air;
snuggled into your nest with your sibs, you'll be protected
until you're ready to chip your way out into the big bad world.


The Sidhe Dreamer Four (Air) is named "Restoration"
which implies that you've been in some kind of struggle recently:
a battle (intellectual? emotional?) from which you need to recover.


What do they have in common? In both cards you are sheltered in a circular shape, the arcs of the branches and the sunlight are similar, they share the robin's egg blue and the leafy greens. In both there's a feeling of respite, of being held until you need to move on.

Round One: I declare a tie. Each deck is protecting its inhabitants, although the Sidhe appears to have more of a back story. Why are you in need of restoration? What happened to you?
﻿


2. The Troll guarding the bridge 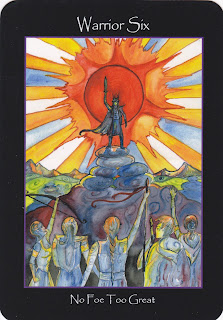 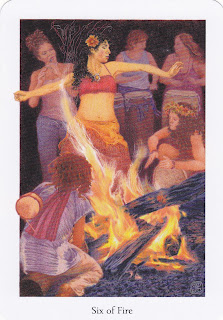 Well, you lucked out with the troll guarding the Gaian bridge.
There's a party going on; might even be marshmallows!
It may be noisy and a bit daunting if you're shy, but you can
probably skootch around the edges if you don't want to meet anyone.
If you're the sociable type, join in for a while before moving through.
Do you have your tambourine with you? The Six of Fire is celebrating!


Warrior Six is a big deal.
If the champion on top of the hill is you, then no worries!
As the card says, "No Foe Too Great".
If YOU are the foe, then you might be in trouble.
Something tells me that you're neither the enemy nor the champ;
all you have to do is elbow your way through the well-wishers,
climb up the rocks to the top, greet the guy who's celebrating,
and you'll be on your way. It might take a bit of time.
And there won't be any s'mores - sorry about that.
What do they have in common? The red-yellow of the flames and sun, purplish-grey where the light is not shining; some people low on the card and others high; the diagonal of the logs in the Gaian moves up to the right and joins the Sidhe at the hill coming in from the left. Both are celebrating something.
What's different? In the Gaian everyone is taking part in her own way, although the focus is on one woman. In the Sidhe we have more of a pop idol look to the scene. One is more a personal victory, the other very public; one cozy-looking, the other large and loud. And the bridge to cross in the Sidhe is higher and farther away.
Round Two: not quite a tie. The difficulty of the crossing in the Gaian will probably be purely from your perspective, but in the Sidhe there may be other people to contend with. The cards are showing possible time variations in how long it could take you. However, I've think you've dodged the nasty troll in both cards!
3. What’s on the other side 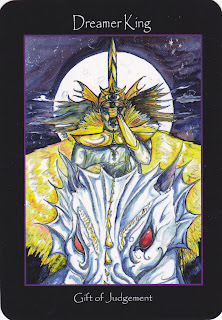 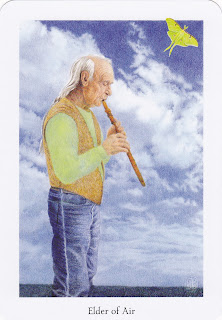 Serenity. Wisdom. Peaceableness. Kindliness.
This Elder of Air knows what he's accomplished in his life
and doesn't have to prove anything to anybody.
You don't like what he has to say? Oh well.
So what's on the other side with the Gaian?
A non-judgmental place, flute-ful, with a
luna moth for company. It's a safe landing.
Here he comes, sword in hand, huge horse/dragon beast beneath.
In-your-face energy with this Dreamer King. Better be on your toes!
And as in all the court cards of the Sidhe,
you are given a gift; here it's the "Gift of Judgement".
So if you cross the bridge over here you'll be called upon to think,
weigh ideas, make decisions, sit up straight and pay attention!
What do they have in common? BLUE! The colour of the Air and sky, YELLOW for brightness and light, and whites.
Both men are holding something stick-like in front of them and are surrounded by open sky. And they both have longish straight hair. (A trite observation, I know.)
What's different? Relaxed versus highly energized. Off in his own world of music versus riding straight at you, about to run you down with his horse-beast. "I no longer worry about things like that" versus "What are you going to do about it?" Let me relax you with my music or let me run you down with my horse/beast. Deep full breaths or a quick startled intake of breath.

Round Three: definitely different landings. The Gaian's safe haven or the Sidhe's challenge? Take your time and catch your breath or DECIDE and LET'S GO!

Two great decks, two types of energy, two perspectives, two heads are better than one! ﻿
Posted by TeawomanTarot at 16:53