...where angels (and even other Fools) fear to tread. All Fools are not created equal, which is one of the things that makes tarot so much fun!

Our first two volunteers hail from the light and dark cousin-decks, the Victorian Romantic (1st edition 2006) and the Bohemian Gothic (2nd edition 2010), conjured from the creative minds of Karen Mahony and Alex Ukolov at Baba Studio in Prague. 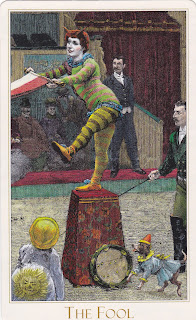 Here we have a low risk fool experience, sort of tame as leaps-of-faith go. This Fool isn't going to fall far, and if he does there are lots of people (and a well-dressed monkey) to help him out. He might make a fool of himself, but that's about it. 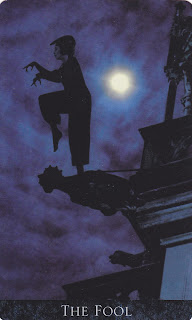 Let's look at two more Fools, this time from the painstakingly drawn 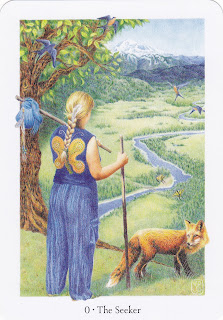 The Gaian Fool, renamed The Seeker, is a young woman (unusual and refreshing). There's a gentle slope ahead, the weather's mild, the winding river looks to be shallow, and she seems well-prepared for what she might encounter. I'm not worried about her. 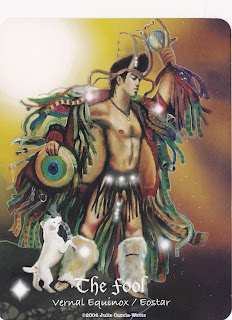 Now look at the Maat Fool. A young man in ritual garb appears to be in a self-induced trance. He may be completely ready to tackle what comes, but he may not - it's hard to tell. I'm a bit concerned about him.

Another pair who speak differently to us.


﻿ Hang on - a few more Fools just rushed in. The sillies, they were supposed to be here yesterday if they wanted to be in this post. I wish they'd quit fooling around! 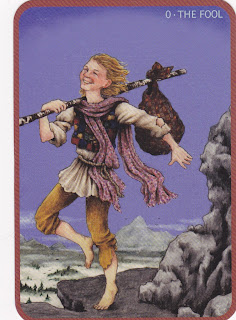 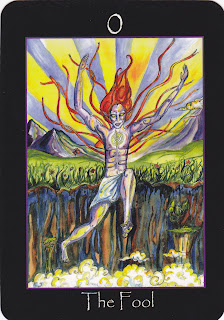 Left:
The prize for the most energetic Fool goes to the vibrant Tarot of the Sidhe.


How about this jaunty chimney sweep (L) from Barbara Moore's sassy yet serious Steampunk Tarot? He gets the nod for the Fool most likely to succeed. There's a lotta hutzpah there! And finally, (R) the trophy for the most elegant Fool goes to the DruidCraft Tarot's classy wanderer and his elegant greyhound! 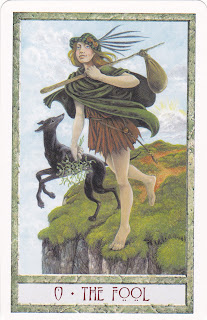 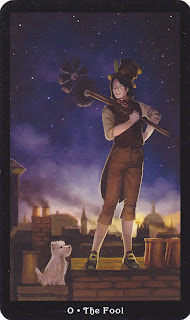 I wish you could hear the racket going on here! To the dozens of Fools who are banging on the lids of their boxes demanding equal time, I say, "Patience, guys! April Fool's Day is only eight months away!"﻿

My Dad, Tea, and the Four of Pents

For years I've been telling people that my penchant for a pot of tea stemmed from a couple of summer weeks spent at my friend Ruthie's cottage.
Life at Breezy Point was my first exposure to the silky waters and cedar-scented paths of Ontario's beautiful Muskoka district.
It was there that I paddled my first wobbling canoe across the moonlit lake to a dance at the pavilion.
It was the first intoxicating taste, my first nibble, at the southern edge of Ontario's vast north.

It was my first up-close-and-personal visit with an unfortunate bat trapped in the bedroom curtain. Much screaming and broom-waving ensued, as you might expect in a dorm-ish room of teenage girls.
I've thought for all the years since then that the gatherings around that vacation teapot at Breezy Point were my intro to tea drinking.

BUT THAT IS AN UNTRUTH! I've been lying all these years. Decades of deceit.
And I realized it this past June 16, Father's Day.

My generous gentle Dad is no longer here to celebrate, and I was feeling that we should have been barbequing steaks with him as we always did on Father's Day. And somewhere in those nostalgic Dad-thoughts, it hit!

My earliest tea-drinking memories are of early breakfasts with Dad, before anyone else was up. 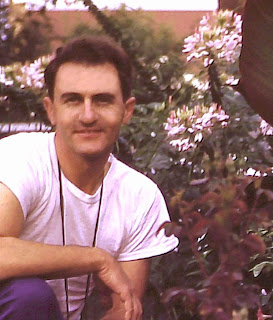 He made milky sweet tea and dipped strips of white fluffy bread into it. And for me, a few spoonfuls of his tea topped up with milk. I was grown-up. My dad's girl. Life was good. 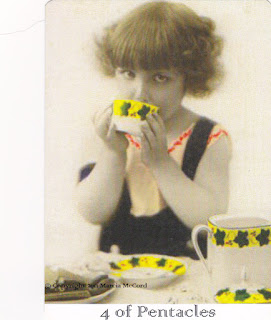 Did I want to share those rare mornings with my little brother? Or my mom? Absolutely not!

Guarding, hoarding, protecting, saving, hiding away from others, fending off - these are what the Four of Pentacles is all about. This you're not invited look from Marcia McCord's Tea Tarot? This girl learned it from me!

Stashing, stowing, keeping for ourselves. Toddlers get this. Just try touching one of their toys.
I don't want it, but I sure as heck don't want YOU to have it! 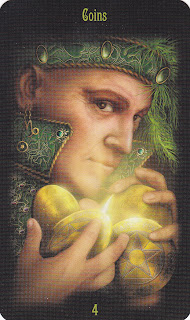 Mine. Mine. Mine.
If they don't learn how to share by the time they're adults, they might end up like this Four of Coins from Ciro Marchetti's Legacy of the Divine. 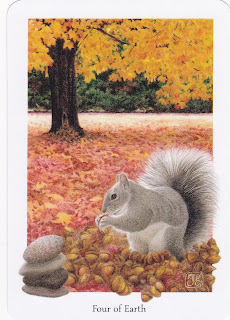 Of course there are times when squirreling away is prudent and necessary, as we see in the Four of Earth from Joanna Powell Colbert's Gaian Tarot. If this little creature doesn't set himself up for winter, he's in trouble. So he's allowed to be a hoarder.

Then we have the case of the smugly selfish Four of Pentacles guy from the Anna K Tarot who keeps all manner of things for himself, even when others are clearly in need. Can he really eat all those apples before they rot?
Does he need ALL the gold? ALL the firewood? And does he realize that while he's keeping at bay all the potential moochers he's also isolating himself from...well...everyone. The upside for the sad ones on the wrong side of the fence is that this skinflint is likely to develop a permanent hunch from crouching behind his wall! 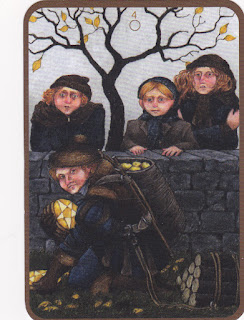